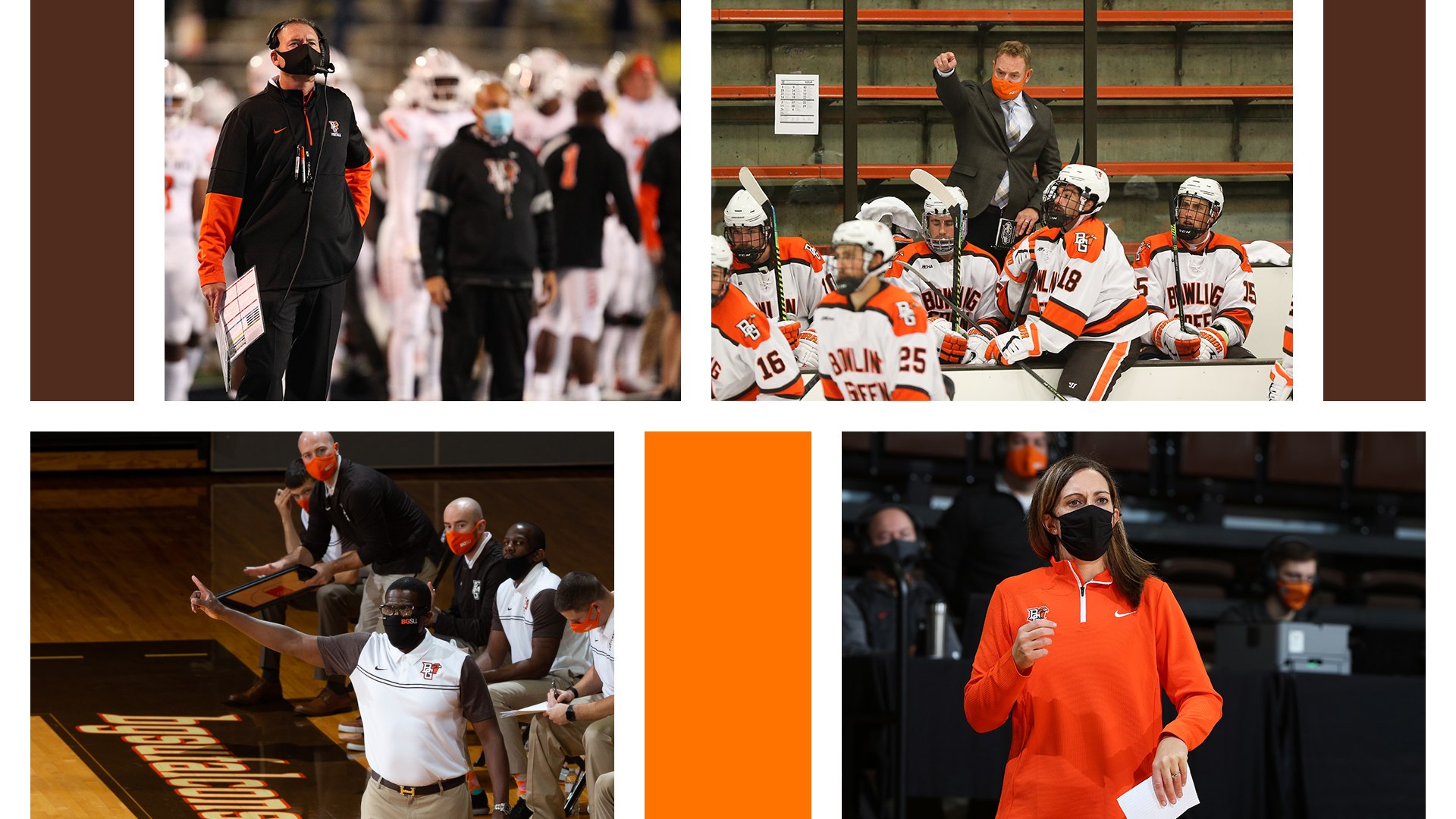 The games go on as BGSU adjusts to the pandemic

The memory was still vivid of the raucous, standing-room only crowd of 5,000 fans packing the Stroh Center to witness Falcon Men’s Basketball’s historic win over 18th-ranked Buffalo in a nationally televised game in 2019. In stark contrast, Associate Athletics Director for Arena Operations Jamie Baringer recently watched the Falcons beat the Bulls on that same floor in an essentially empty arena.

Limited to just 300 people in the building by strict health department and conference protocols related to the coronavirus pandemic, Baringer sees the teams, coaches, Stroh Center staff, and the media inside the prominent showpiece on Wooster Street, but an otherwise radically different game-day environment. 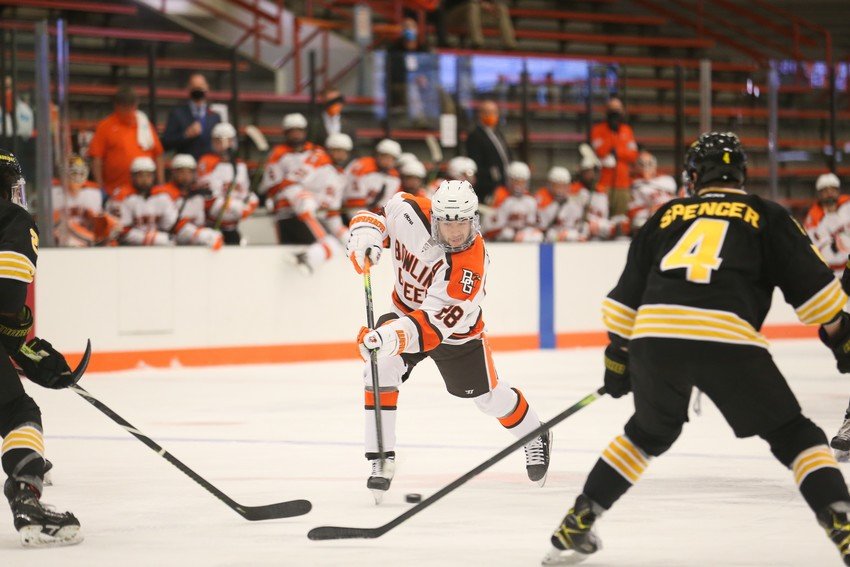 Like much else in the lives of those in and around campus, and across the nation and the world, things have been turned upside down and contorted a hundred other ways by the pandemic.

“Everything really truly has changed, from how we hold pregame meetings to the team practices, where we seat the media and how the locker rooms are used,” Baringer said. “From opening the doors in the morning, to leaving at night, it’s all different, down to the smallest details.”

Baringer, who also oversees the Slater Family Ice Arena, said her staff planning sessions related to how the University would stage basketball, volleyball, and hockey games — if and when those events received a green light to take place — started in the spring/summer.

“That was the biggest thing — figuring out how we are going to do this and stay within the local and state guidelines. Athletics is always on the go, but when you add COVID-19 to the picture it changes everything. It doesn’t change what you have to do — it changes how you do it.”

There are now temperature checks for everyone entering the building, strict routing of traffic in and out, and keeping everyone physically distanced. It has also involved reconfiguring the official scorers’ table and the media seating to allow those individuals to still function in their assigned roles, while adding Plexiglas barriers, etc.

“It’s just made us rethink how we operate, but we’ve always been able to figure out a way to adapt and be successful.”

“The essence of the game hasn’t changed — it’s still the players and the officials,” she said. “It’s just made us rethink how we operate, but we’ve always been able to figure out a way to adapt and be successful.”

Game-day at The Doyt and on the road

Over at Doyt L. Perry Stadium, Steve Messenger has faced another cavalcade of covid-borne challenges, although in a mostly spacious outdoor environment. As the University’s associate athletics director for operations, events and championships, Messenger manages Falcon Football game day.

“Initially, it looked like things would be simplified since when you don’t have the place full of fans a ton of things you normally deal with go away, but once we started to dig into this, it was obvious that everything we do was going to have to change,” he said.

There was intensified monitoring and routing of the foot traffic through the Sebo Athletic Center since it is the hub for the coaching staff, houses the training areas, and holds the Department of Athletics offices. There were issues to address with the use of the elevators and the restrooms.

“A lot of these things just happen automatically on a regular game day, but now we had a lot to figure out,” Messenger said. “All of those things you never think of — those are the things we had to look at.” 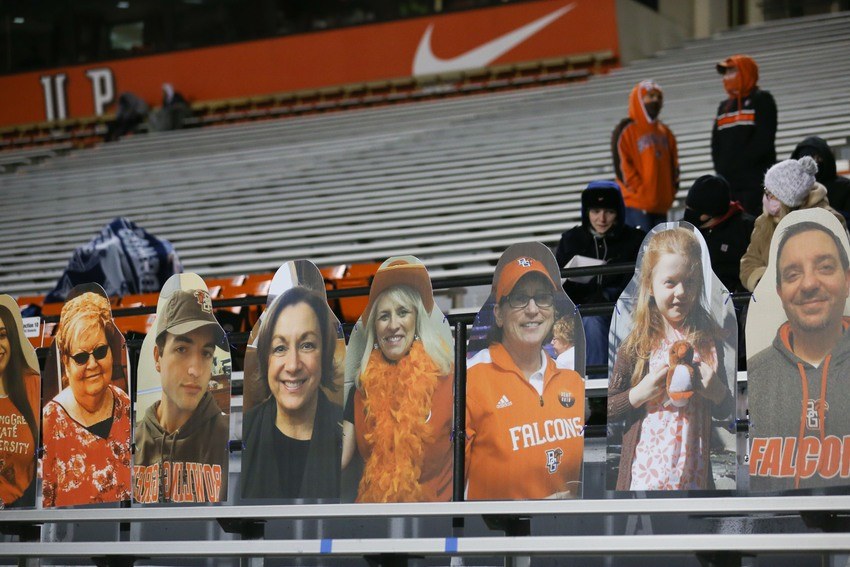 One of the early directives called for the bottom 12 rows of The Doyt’s stands to be closed to keep the few family members and fans that would be allowed to attend the games away from the players. All of the seating for the players’ families was designated as reserved to keep plenty of distance in the stands and meet the directives laid out by the Mid-American Conference.

“We needed to bring everything into that COVID-19 framework, so that meant micro-managing 100 different areas,” Messenger said, “but that was how it had to be and it wasn’t hard to get everyone on board.”

Director of Football Operations Derek Miller is responsible for many duties, including recruiting visits and coordinating travel. Moving the team for three road games in this shortened season became a much more complex affair as BG doubled the number of buses it used to four to allow for the necessary physical distancing. Starters were never seated or roomed with their backups to safeguard against potentially losing one position if there were positive virus tests.

“It became a project to get players in the right seats and trying to match up so we didn’t risk losing numbers at any position,” Miller said. “We had to be smart about how we did things and constantly communicate with the players about testing, the travel list, and their bus and room assignments. Nothing was consistent with the way we used to do things, but we had to be happy with that.”

Jason Knavel, the associate athletics director for strategic communications & brand advancement, had to manage the myriad details involved with hosting media for the home games. There was no longer anything regarded as minutia, since how credentials would be picked up, how parking would be handled, and how the work area for the press could be divided in order to maintain the necessary distancing all were reviewed.

“From the very beginning we were tasked with looking at every little detail to determine how we could function better in the covid era,” Knavel said. “And with the football press box being the only place at the stadium where people were in an enclosed space, we had to re-envision how we do things.”

Knavel moved his football stat crew to an open suite, there were new limits on the number of media credentialed for each event, there was a reconfigured seating plan for the Stroh Center, Ice Arena and the stadium, and for football there was no crossover between field access and press box access.

“Essentially you come in, you find your assigned space, and that is your space until you leave,” he said. “Fortunately, everyone has been really good with understanding that this is the way it has to be.”

Knavel said there were extensive discussions and MAC Zoom meetings in the months leading up to football being played, with a wealth of idea sharing in an effort to maintain a consistent approach throughout the conference. He added that it worked to Bowling Green’s advantage that Falcon Football was on the road for the first week of the abbreviated season.

“We could see what worked, and what still needed to be addressed,” he said. “The most difficult thing was the fact that nobody has gone through anything like this. There is no playbook for dealing with a pandemic.” 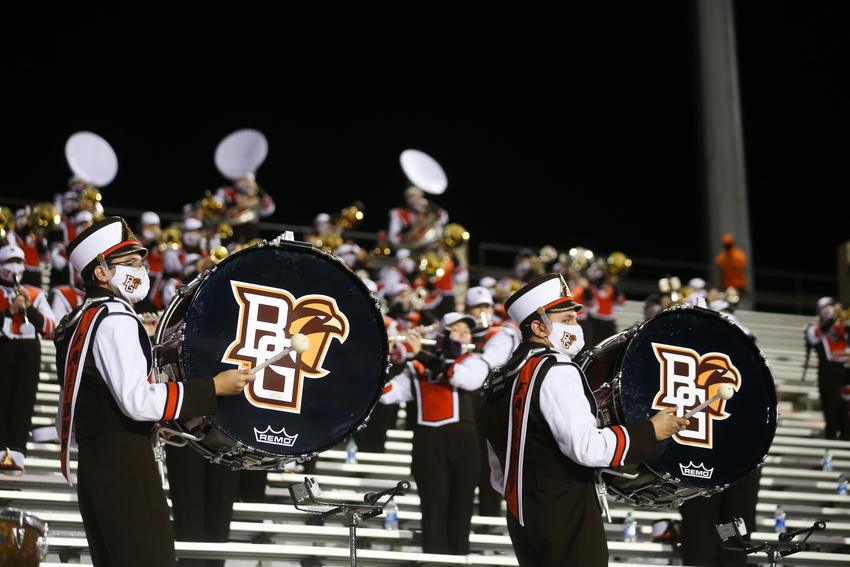 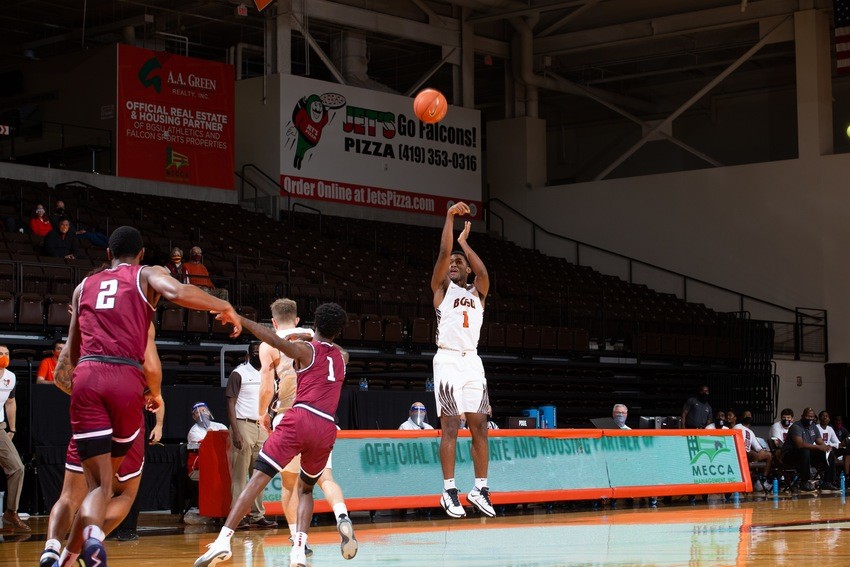 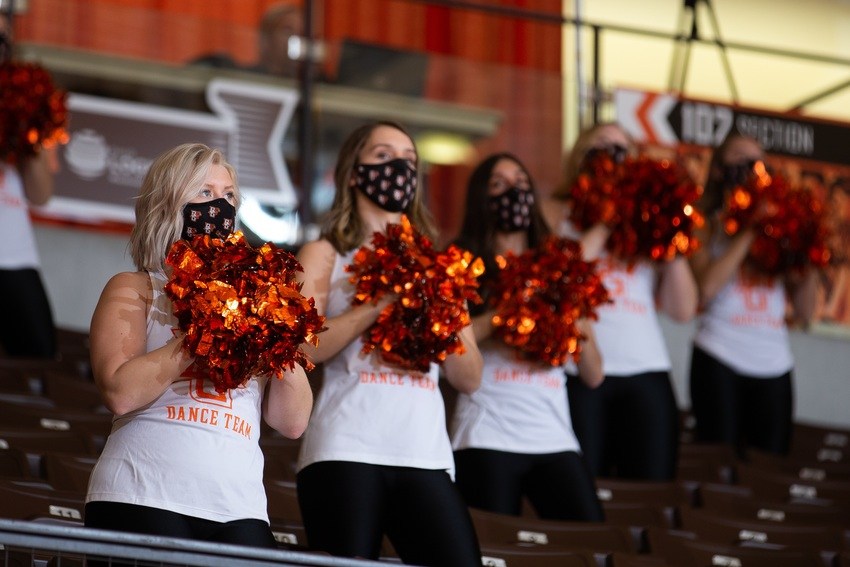 The student-athletes faced their own set of hurdles as they focused on training and preparation while often linked only virtually with their coaches and teammates, and functioning in a sea of uncertainty over when competition would resume. BGSU redshirt freshman Kailee Perry, who this fall won the Women's Cross Country program’s first MAC individual championship since 1995, said even her training runs felt different.

“Compared to last season, everything was completely changed. I feel like this whole fall season we were running into the unknown,” she said.

Perry said that as the Falcon runners trained, discipline was essential since they did not know if or when they might be able to compete again. She said the coaches and her teammates pushed each other and focused on the pride element in their training.

“We tried to simulate competition, but it was 10 times harder mentally due to all of the uncertainty,” she said. “We had to believe that all of the training would one day pay off, and it did.”

The athletes, administrators, and the athletic department staff speak with one voice when they talk about their longing for a return to some degree of normalcy.

“There is nothing I would rather see right now than an entire arena full of fans and us trying to figure out how to manage that,” Baringer said.

“I want all of the problems that come with parking at the stadium, with concessions and restrooms,” Messenger said. “I’ll take the chaos of game day, the buzz, and the energy of a full stadium anytime.”