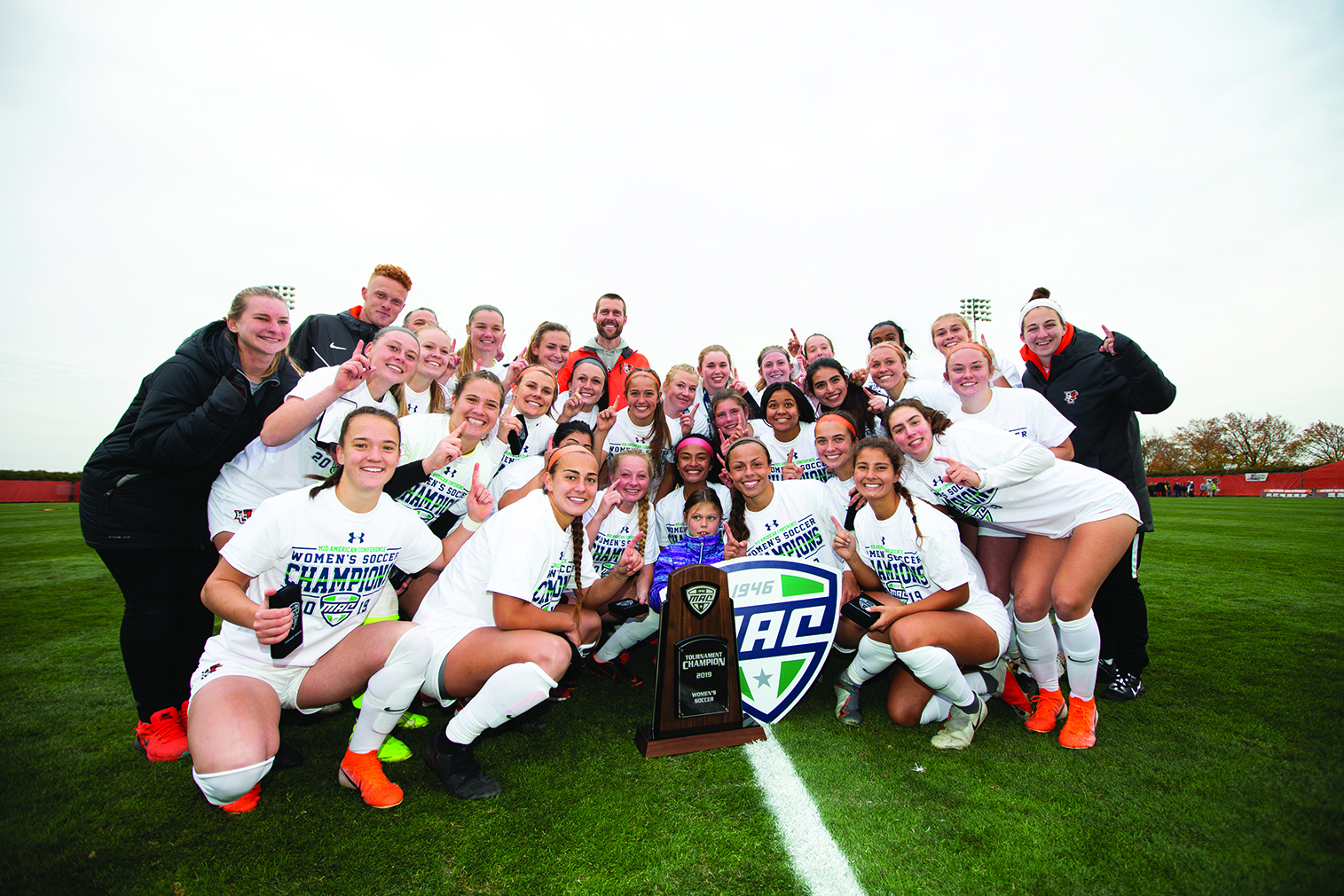 For the second straight season, Falcon Women's Soccer finished MAC regular-season play with a remarkable 10-1-0 record. Overall, the Falcons finished with a 14-6-3 record. BGSU is the first program in conference history to win 10 or more league matches in back-to-back seasons.

The Falcons also prevailed in the MAC Tournament, with a 4-1 win over Central Michigan in the quarterfinal round and a 2-1 win over Buffalo in the semifinals. BGSU advanced to the championship match for the third consecutive season, with the match going into overtime for the third straight year as well. After battling Eastern Michigan to a scoreless draw, the Falcons went on to win, 3-1, via penalty kicks.

Head coach Matt Fannon, voted MAC Coach of the Year, and the Falcons, now MAC regular-season and tournament champions for the second straight season, traveled to Ann Arbor, Mich., to face the 19th-ranked University of Michigan in the first round of the NCAA Championships. The game brought the Falcons’ extraordinary season to an end with a hard-fought, 2-1 loss. This marked the fourth time in program history that the Falcons qualified for the NCAA Championships and the second time in as many seasons.

For just the third time in school history, four different players scored at least 15 points in a season. Senior Chelsee Washington had 25 points on the year, while redshirt junior Nikki Cox scored 23, freshman Kennedy White 22 and senior Maureen Kennedy 17. Cox, Kennedy and Washington all were named to the All-MAC First Team, while White was one of three Falcons who earned second-team honors. Washington was the league's Offensive Player of the Year, while Kennedy picked up the MAC Defensive Player of the Year Award for the second straight season.

Washington became just the second player in program history to be named to the United Soccer Coaches All-Region First Team, while Kennedy was named to the second team. Washington and Kennedy are the first Falcons ever to earn all-region accolades in multiple years.

Kennedy was one of just five players across the nation to be named a First-Team Senior CLASS Award All-American, becoming the first player in school history to earn the honor.

“To have been so successful over the past two years is a testament to how driven our women are,” Fannon said. “They have pushed themselves so hard in every aspect of what we do, and really deserve the accolades on the field and in the classroom. To have broken the two-year conference win record is incredible, and our entire staff feels very lucky to work with these talented student-athletes every day.”