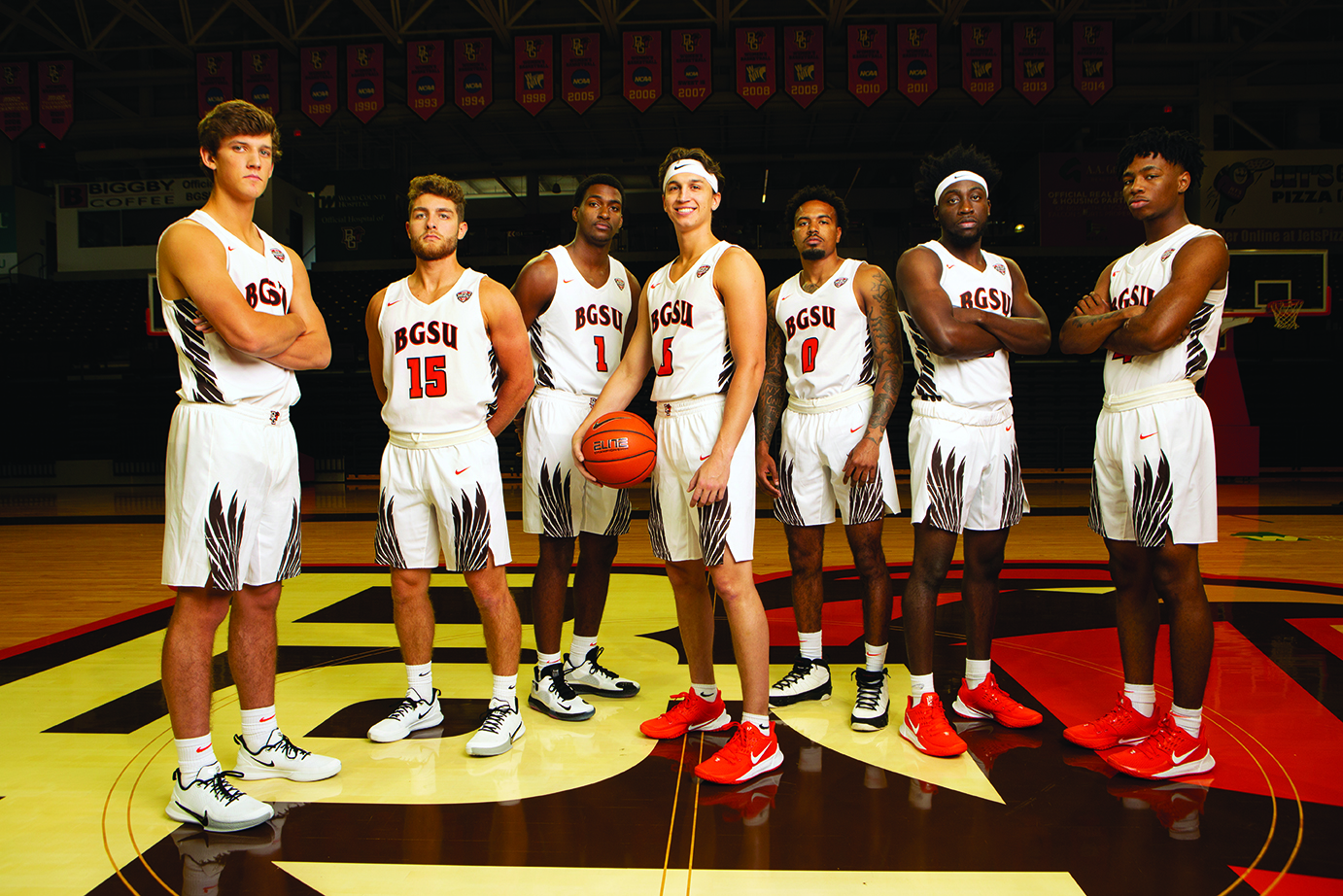 Falcon Men Plan to Live up to Lofty Billing 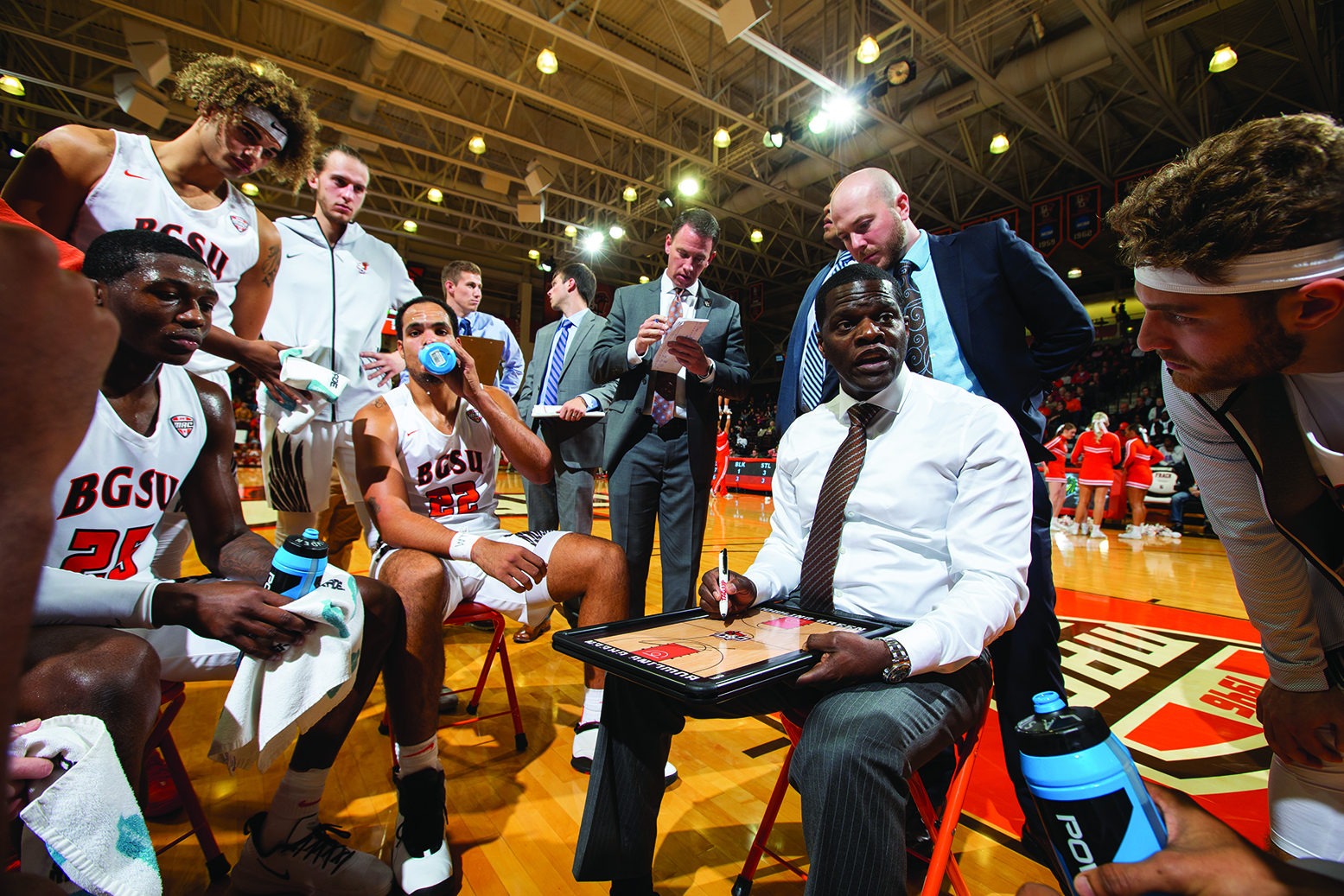 Falcon Men’s Basketball has moved. The team didn’t have to pack up the office furniture and uniforms, or fill out a change-of-address card, but in the 2019-20 season, this group is definitely residing in a new realm.

They now live in the land of high expectations.

Bowling Green, which entered the previous season picked last in the Mid-American Conference’s East Division, fought its way to a second-place finish and then advanced all the way to the championship game of the conference tournament for the first time in 17 years.

Based on last year’s impressive performance, and the fact the Falcons have the league’s best player in junior guard Justin Turner as one of 10 returning letter winners, BG is the favorite to win it all this time around.

“We definitely sense that this is an exciting time for Bowling Green basketball,” said Head Coach Michael Huger.

“We’ve seen the progress as the team has grown, and we feel like there’s been upward momentum with the program, but the guys also understand very well that predictions don’t mean anything. It never matters where they pick us — it’s how we finish that’s the only thing that matters.” 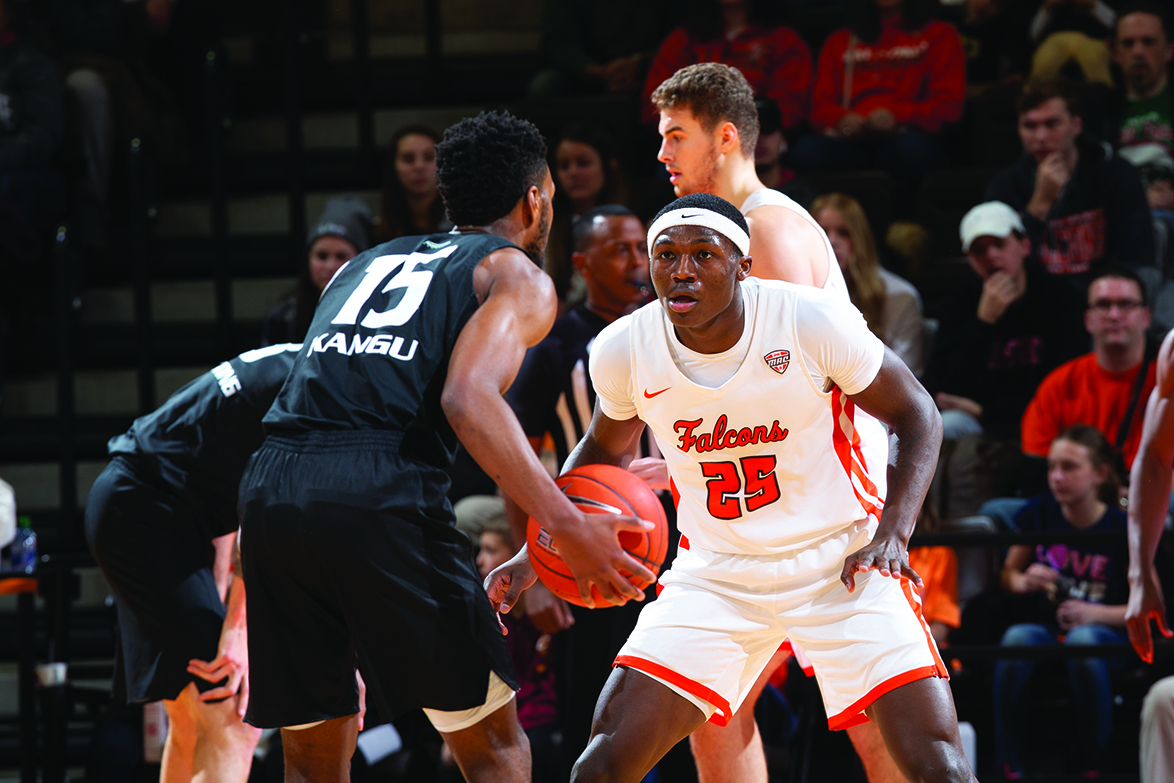 Huger, the 1994 graduate who led the Falcons to a pair of NIT appearances as a standout guard, has relied on staff continuity and an emphasis on hard work and tenacity from his players as he’s put his stamp on the program. The Falcons have moved up in the MAC East standings in each of Huger’s first four years at BG.

“You love to see the growth, but you approach every day and every practice knowing that you can always do even more,” he said. “I like to see the team gradually getting better, gaining more experience and constantly pushing to improve.” Huger also pointed to his team’s success in the classroom, with continuous improvement in the Falcons’ Academic Progress Rate an overarching theme during his tenure.

The Falcons, who went 22-12 overall and 12-6 in MAC play last season, are again led by Turner and senior guard Dylan Frye, who joined Turner on the pre-season All-MAC East squad. Bolstered by Turner’s 18.2 points per game and Frye’s 12.8 ppg. averages from last season, the Falcons have the luxury of returning almost 70 percent of their offensive punch.

Turner, the early leading candidate for MAC Player of the Year honors, led last year’s team in scoring, assists and steals — the first player to pull off that triple since Huger did it in the 1991-92 season. Turner became the first BG sophomore in nearly 50 years to receive First Team All-MAC honors and is the only returning First Team All-Conference player. He shares Huger’s guarded optimism, while pushing for even more production and a greater leadership role.

“I’ve always been a leader by example, but I wanted to come back this year and be more vocal,” Turner said. “We had a good season last year and now everybody’s paying a lot more attention to Bowling Green. We know what the challenge is coming into this season, and we’ve been pushing each other to do even more.”

Frye, who entered the 2019-20 season on pace to break the school record for three-point field goals made, said this edition of the Falcons is strong on depth, versatility, and collective mettle. Those qualities were all on display when the Falcons took down Cincinnati 91-84 in overtime in the semifinals of the Paradise Jam tournament in November.

“Sometimes it's so loud in there that I can't even hear my own thoughts. The energy in the arena is crazy … our crowd really brings life to us.” – Dylan Frye 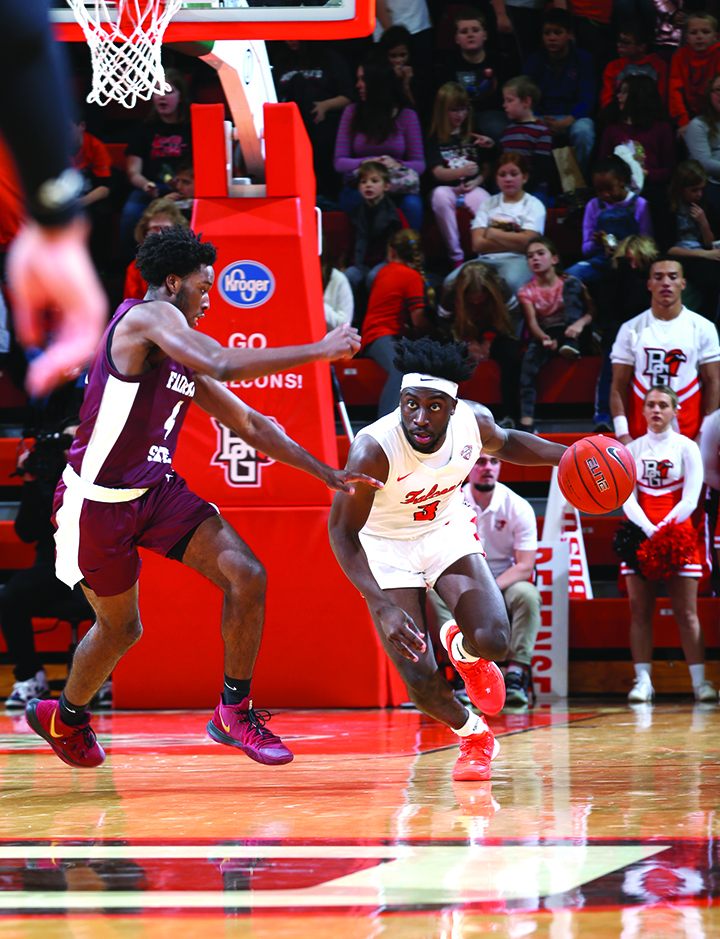 With Turner missing the entire second half due to an injury, the Falcons erased a 10-point deficit in just over three minutes at the end of regulation, Frye tied his career-high with 28 points, and newcomer Trey Diggs hit a triple with 28 seconds left to tie the game and force the overtime. A few nights later, Frye set a new career-high when he dropped 30 points in a home win over Dartmouth.

“We’ve gelled and we feed off each other’s energy,” Frye said. “All of our guards can play multiple positions in the offense, and it’s been awesome to see the improvement we’ve made. I want to be a better leader this season, be more vocal, and show the younger guys the importance of a strong work ethic.”

Huger credits the leadership from his veteran players, and the reliability of his top assistants — Mike Summey, Kevin Noon and Anthony Stacey, the Falcons’ career scoring leader, have all been with Huger since he returned to lead the program — with playing a major role in the steady improvement BG has made. Turner said the progress has been a collective effort that he expects will take Bowling Green to even greater heights.

“Each year we’ve seen the growth of the coaches, and the team,” the Detroit native said. “We really feel like we’re building something special here.”