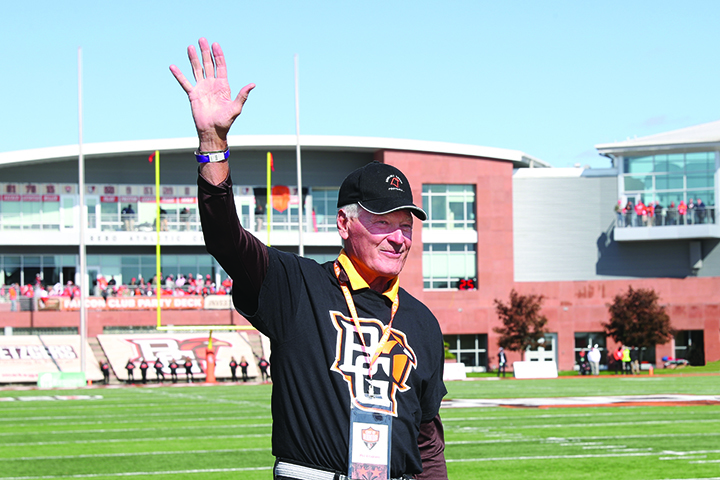 Phil Villapiano being inducted into BGSU Cast of Honor 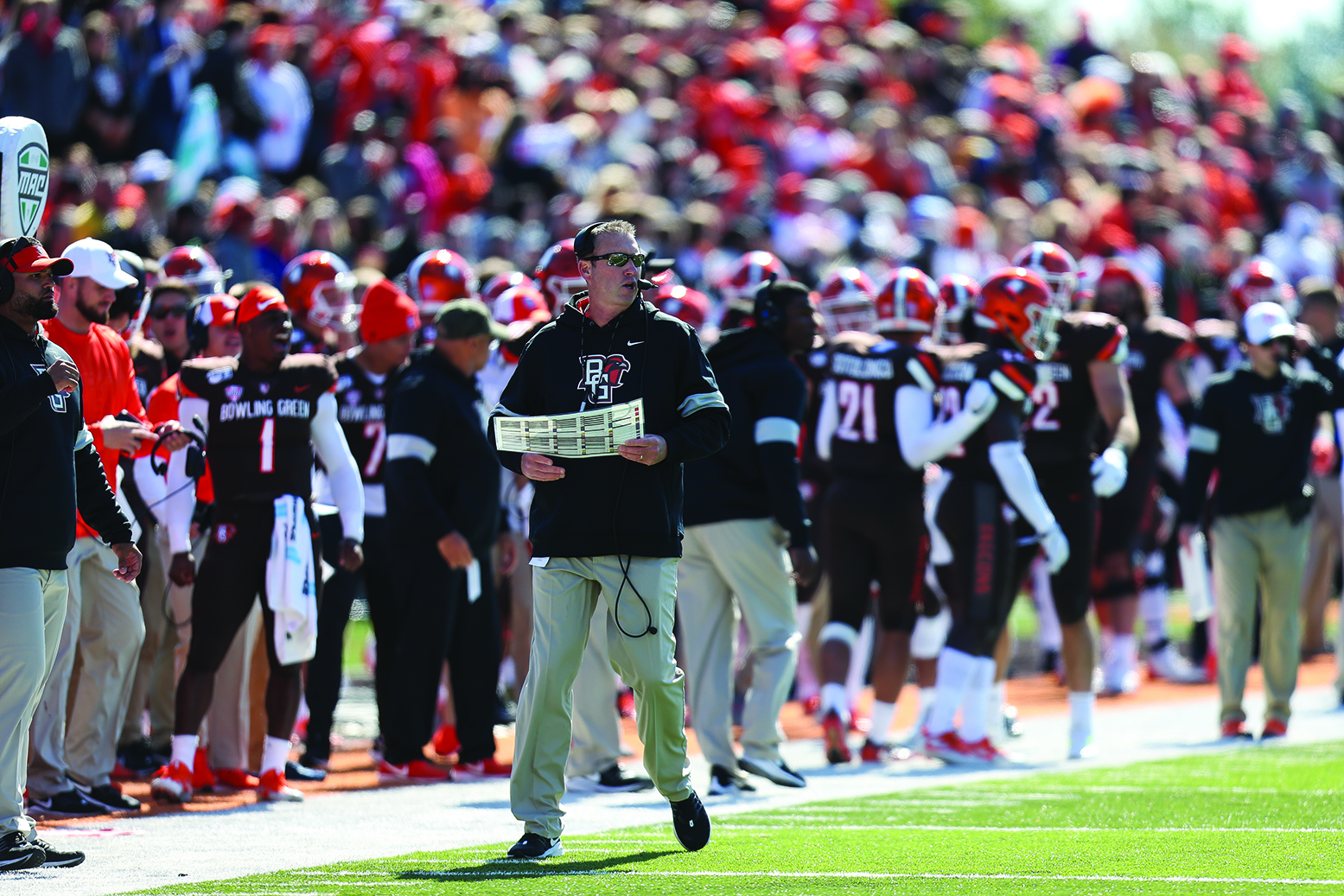 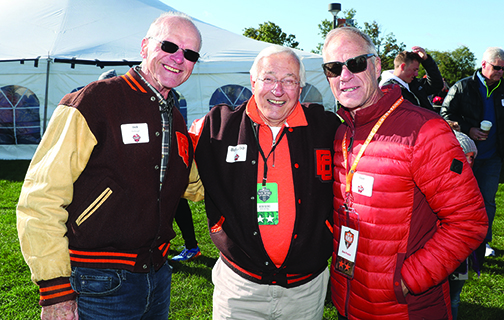 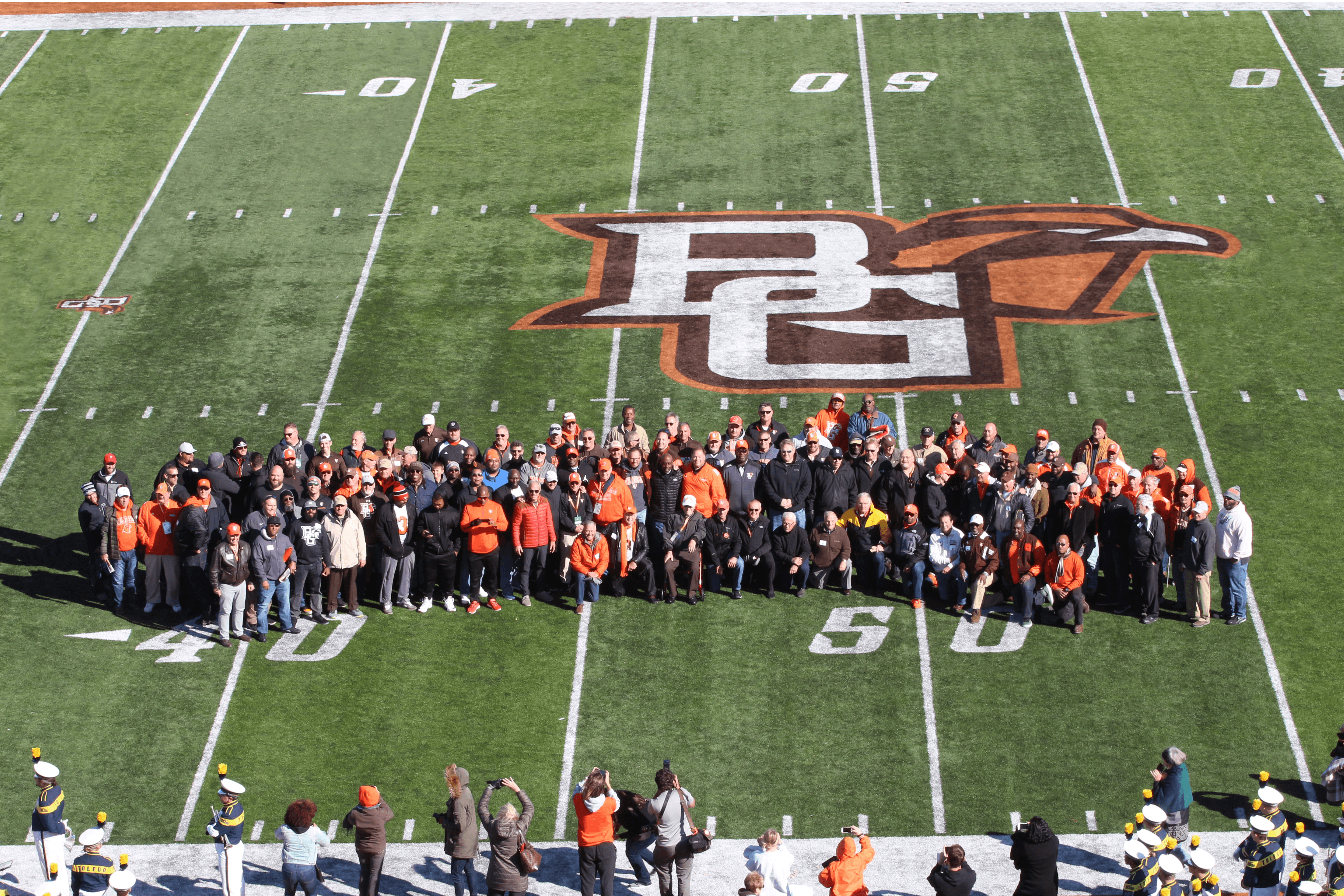 Falcon Football alumni gathered on field after the game 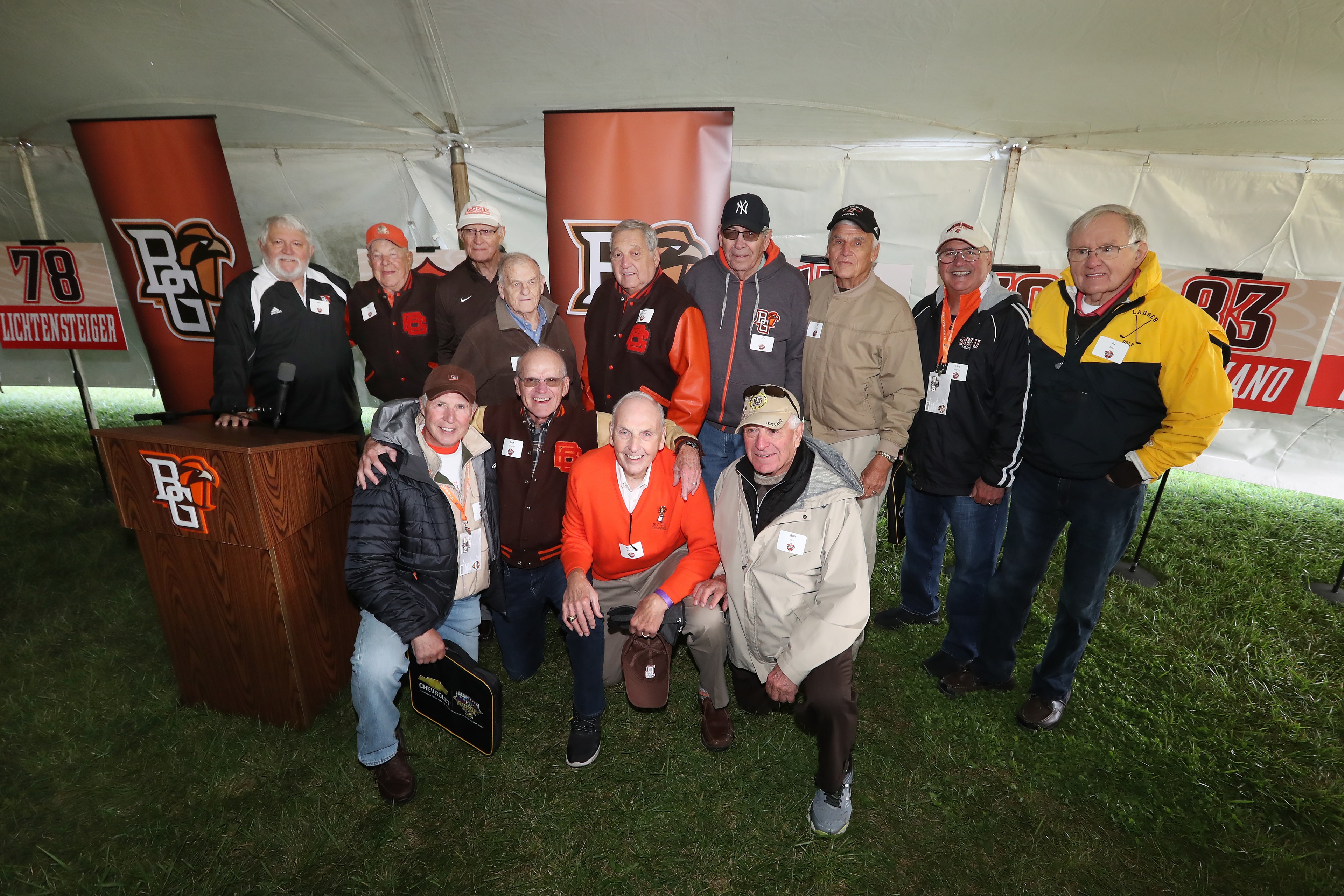 The rich 100-year history of Bowling Green Falcon Football was celebrated on an October day when the proud past merged unexpectedly with a remarkable event of the present, adding another chapter to the program’s lengthy list of momentous victories.

It was by design that the opponent for the game that would mark the first century of Falcon Football would be arch-rival Toledo, and that numerous former players and coaches would be on hand for the centennial celebration and to see a group of 10 stars of past Falcon teams inducted into the Cast of Honor.

What certainly could have been wished for, but not fully anticipated, was the fact that the Falcons, a nearly four-touchdown underdog, would shock the college football world by defeating Toledo 20-7. It was the best possible icing on the celebratory cake as the Falcon faithful honored past standout performers Phil Villapiano, Mark Miller, Bernie Casey, Kory Lichtensteiger, Josh Harris, Fred Durig, Jack Hecker, Vince Palko, Mike Weger and Bob Zimpfer.

“If you could draw up a perfect weekend, that was probably it,” said Miller, an All-American quarterback for Bowling Green (1974-77) who later coached at BG and then worked radio broadcasts of Falcon games. “The number of guys that came back was phenomenal, and they came from all over the country because they recognize the impact this place had on their lives.”

The special 100th Anniversary event also paid tribute to the members of the 1959 National Championship team, and recognized those players who made up the first BG football team in 1919. The significance of the victory over Toledo, coming on the same day that Bowling Green marked the 100 years its football program has been around, was evident to first-year Falcon head coach Scot Loeffler.

“Football is really important here, and I believe our players are excited about trying to get Bowling Green back to where it has been in the past,” he said. “They’ve left a legacy with this win, and that’s what college football is about — those special moments, those bonds with your teammates and that unity.”

Those close ties, cherished memories, and rich legacies are what made the newest additions to the Cast of Honor household names among knowledgeable BGSU Football fans.

"They are the best of the best,” BGSU Director of Athletics Bob Moosbrugger said. “This is an elite group representing BGSU at the highest level of achievement, both in competition and in life. We are very proud to hang their names and numbers at Doyt L. Perry Stadium so that fans for years to come can be reminded of the tremendous tradition of excellence we have at Bowling Green."

Harris, who holds a number of offensive records at BGSU, was humbled by the Cast of Honor recognition and used the opportunity to credit his teammates and coaches for having a huge role in his success on the football field.

“This is a huge honor,” Harris said. “As time goes by, it really lets you know that we are appreciated. I really learned how to play the game while I was at BG. I learned what it meant to be a really good teammate and a leader.”

Lichtensteiger, a two-time first team All-MAC pick and a two-time team MVP for the Falcons who went on to play eight years in the NFL, credited his BGSU foundation for playing a major role in his success.

“There are so many teammates and coaches who supported and pushed me along the way,” he said. “I am extremely honored to have my number hanging in the stadium where I spent many of those great moments.”

Miller said the reunions and camaraderie gave the event a very personal side, as the bond between the former players and BGSU was on full display throughout the weekend. The image of Falcon football alum Jack Harbaugh, a member of that 1959 team, leading the group in a raucous rendition of Ay Ziggy Zoomba was just one of the big takeaways.

“One of the coolest things is that no matter what heights guys reach in their careers, they always remember Bowling Green,” Miller said. “When our alumni letter winners get back together for events like this, we talk about how much we love the place and the people.”

Nearly 75 years ago, Gilbert Fox, an original SICSIC member, World War II veteran and musicologist wrote "Ay Ziggy Zoomba" and introduced the tune to Bowling Green. In 2013, the BGSU Undergraduate Student Government passed a resolution formally supporting the promotion of “Ay Ziggy Zoomba” to the status of an official fight song of the University.