directleft Back to Summer 2020 RollAlong! Inside Falcon Athletics Table of Contents 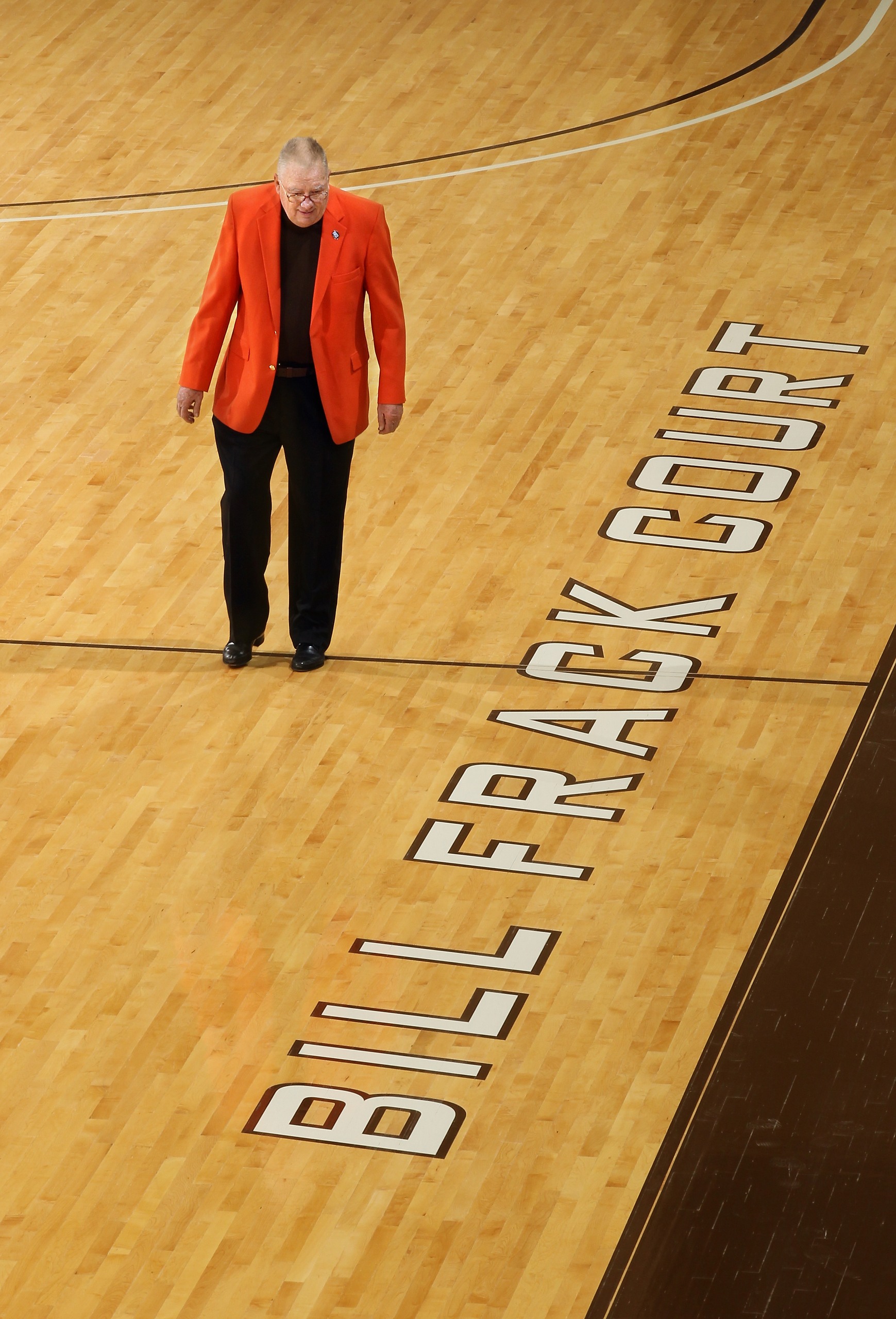 It doesn’t appear on the season-ending stat sheets and it never made the individual game box scores as the Falcon Men’s Basketball team put together back-to-back 20-win seasons for the first time in 50 years, challenged for a Mid-American Conference regular-season championship this year, and were poised to make a serious bid for the league’s tournament title.

But the team’s unquestionable assist leader did not wear the uniform, sit on the bench or hang out in the locker room. He was never in the stands as the Falcons fashioned a 21-10 record this season, nor was he there as Bowling Green went 13-2 at the Stroh Center after earlier scoring a signature win over powerhouse Cincinnati in the Virgin Islands Paradise Jam tournament.

In his absence, his legacy worked its intended magic.

Bill Frack, a dedicated supporter of Falcon Men’s Basketball for 60 years, heard his last rendition of Ay Ziggy Zoomba in 2014, but the major gift he presented to the BGSU program prior to his death has kept Frack a very active and integral part of the team.

“What Bill gave the University was much more than money,” said fellow Falcon backer Kerm Stroh. “More than anything, he was interested in building the image of Bowling Green basketball back up to what it was in the glory days. He really provided a foundation for that basketball team to build on, and then go do great things again.”

The 20-win seasons, an enhanced recruiting profile, and playing in front of large, energized crowds at the Stroh Center — those are just some of the elements Frack had in mind, according to Katherine Kreuchauf who oversees the distribution of Frack’s gift to BGSU basketball as president and CEO of the Findlay-Hancock County Community Foundation. She said Frack had a thorough understanding of the components necessary for a successful Division I basketball program, and he wanted to make sure those elements were addressed and adequately funded at BGSU.

“He wanted everything done in a very professional manner, and he wanted the players to see that they were appreciated, and their parents to know that their sons would be well taken care of,” she said. “What is taking place with the Bowling Green program, with the success they’ve had — this is absolutely what Bill had in mind. He would be so proud of what’s taken place.”

Bill Frack, who was so much more than the quiet gentleman seated courtside in that trademark orange sport coat, was planning for the future of BGSU Men’s Basketball. He envisioned that future would include such things as playing against major programs and eventually bringing some of them into that raucous Stroh Center environment, regular season-long contention for the MAC title, and ultimately taking the team to the doorstep of that next NCAA Tournament bid, and beyond.

“This is something you can point to and show how a commitment of this kind can bring about major change,” Kreuchauf said. “It is so exciting to see Bill’s legacy playing out.” 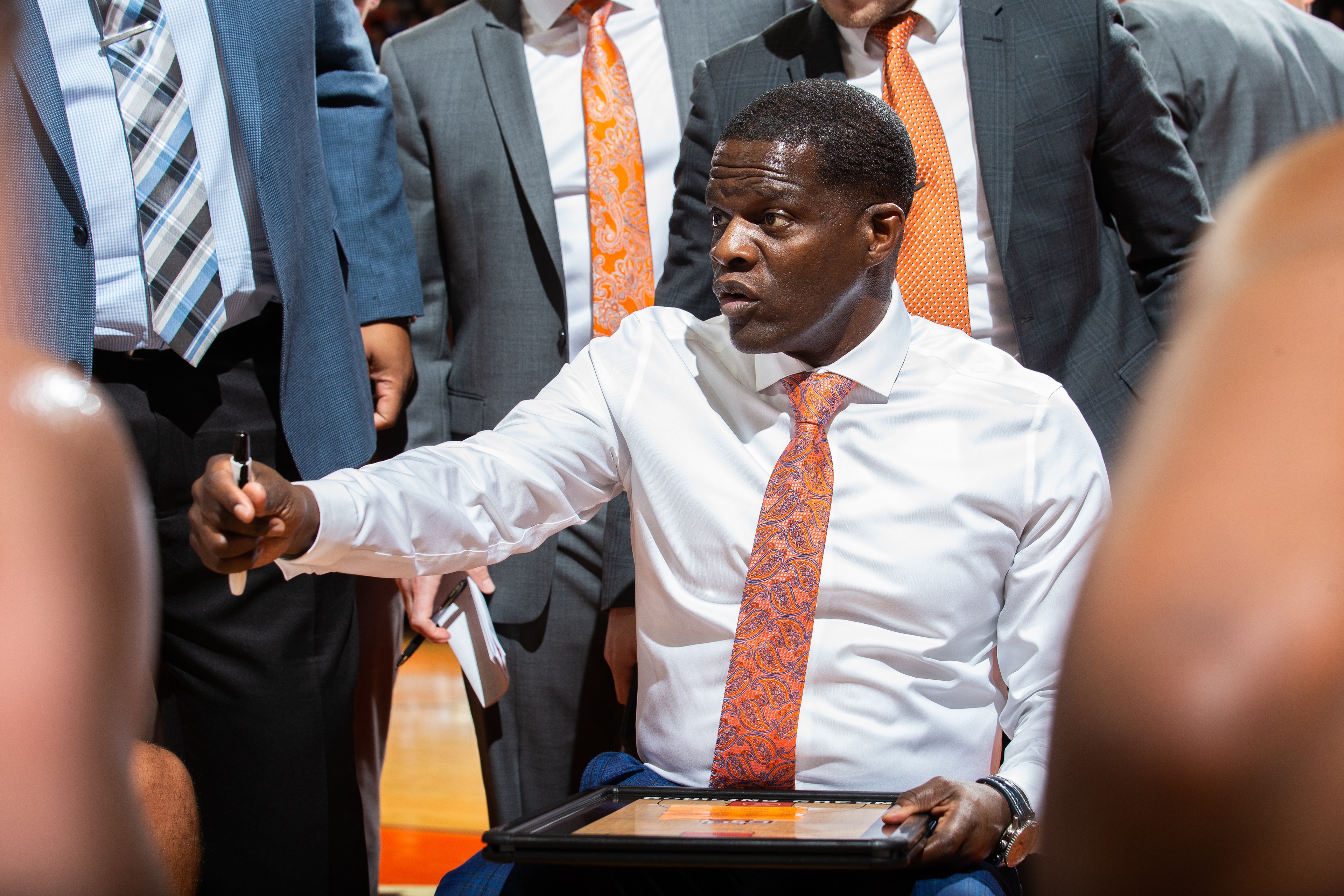 What his gift enabled the program and BG head coach Michael Huger to do was not a lot of little things —it was a lot of big things.

There are the significant benefits of staff continuity, with the financial capability of retaining talented assistant coaches while extending Huger’s contract through 2024. Maintaining stability and consistency — Huger and his top three assistants have all been together leading the Falcons since early 2015 — is a major asset and one that can be traced directly to the Frack gift.

“In Bill’s vision for BG basketball, they don’t have to take a back seat to anyone,” Stroh said, “because they will now have the wherewithal to build a program that is strong for the long haul.”

There have also been key upgrades on the academic support side with increased staffing and the ability to have tutors and other academic assistance personnel travel with the team for road games.

The locker room, uniforms, warmups and the accompanying swag —such an important element to the young players BG is recruiting to be future Falcons —can be updated more often and more options become viable. And the recruiting process itself has been elevated and expanded, with coach Huger and his staff now able to cover more of the country and see more prospective players in person.

Bowling Green’s achievements on the basketball court are directly linked to some recent recruiting successes, and the Frack gift was a key building block as that aspect of the program has been elevated.

There have been improvements in the equipment available for the players’ use for training, strength and conditioning, as well as enhancements in the nutrition program. Foreign trips are now a viable option and there is more latitude in scheduling since the program is no longer reliant on playing so many non-league games on the road.

Frack, who attended BGSU for a while before finishing his studies in his native Findlay, was baptized into Falcon basketball in the era of Nate Thurmond and Howard Komives when legendary coach Harold Anderson led Bowling Green to an historic win over national champion Loyola. Frack’s passion never waned, and he assisted with the funding of the Stroh Center while also structuring his gift so the basketball program would receive significant supplemental funds each year.

“BG Men’s Basketball was his passion and this was his family,” said Jane Myers Zwierlein, former assistant athletics director for development at the University who knew Frack for many years. “He wanted to know if they could be more successful if they had more resources, and the answer was yes, so Bill wanted to make certain they had what they needed. He was such a caring man, and I have to believe he is smiling now, with the success the team has had in recent years.”

The Falcons went 22-12 a season ago, advancing all the way to the MAC Tournament championship game. They are a combined 43-22 over the past two seasons, with a pair of second-place finishes in the MAC’s East Division. The back-to-back winning seasons are the first for the program since 2000-02.

“I think Bill knew what was needed to build a winning program, and he wanted to see that take place here,” said Larry Miles, whose major gift to the project helped fund the auxiliary gym at the Stroh Center. 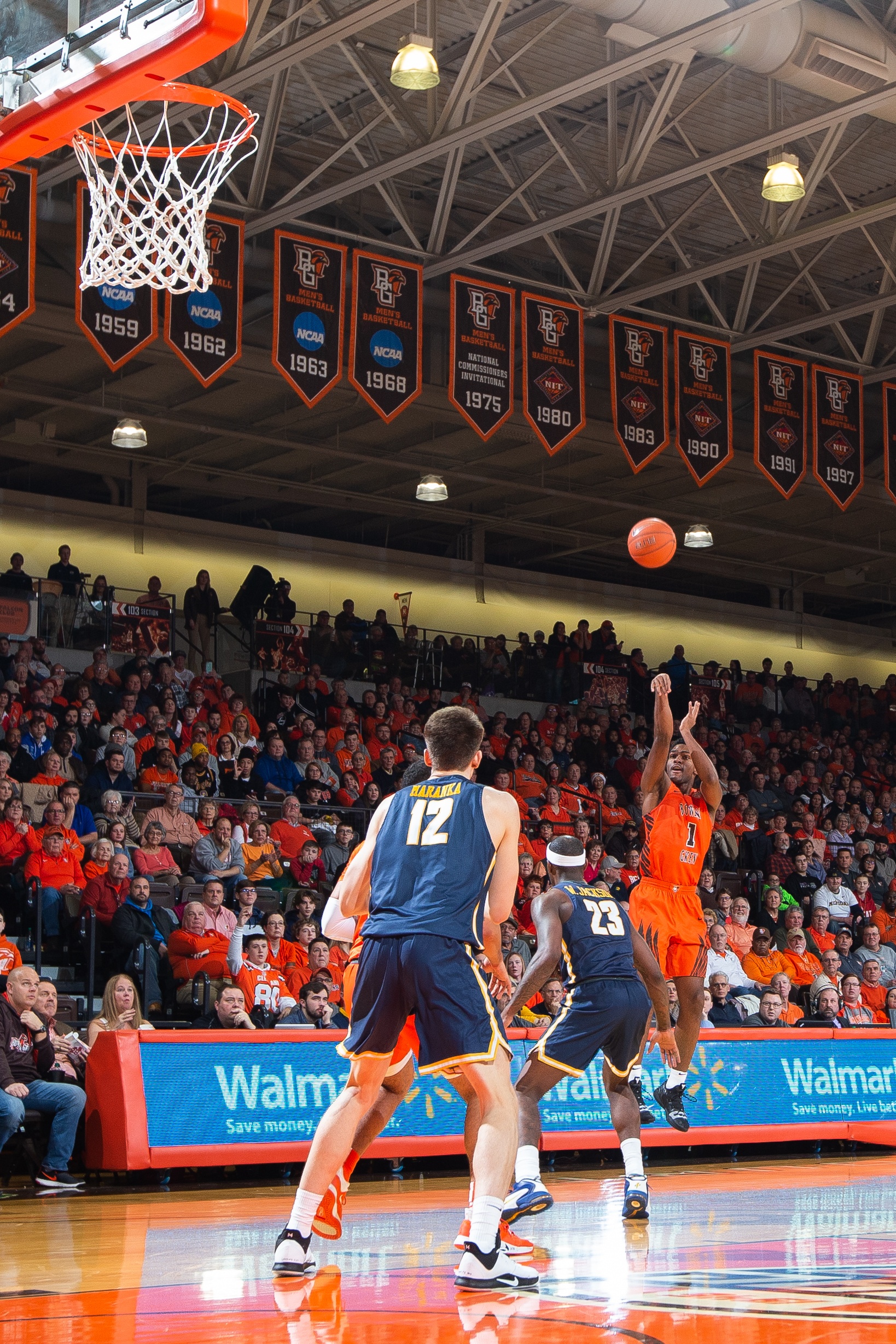 “When you have that kind of financial support behind the program, you can have more coaches and spread your recruiting out across the country. This thing is being built the right way and it is coming along perfectly. We’re at the threshold now of the place where we can really make some noise. That is the difference gifts like this can make.”

Coach Huger, a former Falcon player who has directed the team for five seasons, said he recalls seeing Frack at every home game during his playing days. Frack’s gift was in place when Huger took the BG job and it has allowed him to focus on those elements that create and sustain a strong program.

“His support has allowed me to concentrate on recruiting, developing our players, and making sure we do everything the right way,” Huger said. “I don’t have to be constantly concerned with raising money. Bill Frack completely changed the dynamic here at Bowling Green. His gift opened up so many opportunities — it literally changed everything.”

Justin Turner, an all-conference guard for the Falcons and a major part of their success the past two seasons, said the current players are very aware of Bill Frack’s role in the resurgence of the program, and that his shadow extends well beyond the main court at the Stroh Center that bears Frack’s name.

“For somebody to care that much and want to put Bowling Green student-athletes in the best situation to play the game they love — that tells us what type of man he was,” Turner said.

Multiple benefits of the Frack gift were on display late in the 2019 season when a record-breaking and standing-room only crowd of 5,000 fans packed the Stroh Center to watch the Falcons defeat 18th-ranked Buffalo 92-88. The fan frenzy continued this season when the team set an attendance record, a landmark achievement since packing the place on a regular basis was high on Bill Frack’s priority list. He had experienced the glory days of Falcon basketball in Anderson Arena many years ago and was committed to seeing that type of atmosphere reborn at the Stroh.

“You can tell it is a better environment,” said Turner, a rare, sought-after talent who was recruited by major programs but made BG his top choice. “And those things he did have helped get us to this point where we are confident and playing our best. It’s a privilege to be here and a blessing to see how generous and caring this man was.”

Although the 2019-20 campaign was cut short by the coronavirus pandemic, there is every indication that Falcon Men’s Basketball will be poised to contend for that conference title and chase that NCAA Tournament dream in the coming season. Bill Frack’s investment in that pursuit of excellence was clearly focused on providing long-term benefits.

“When I played, I knew him well. He was a guy who was passionate about Bowling Green basketball, but in a quiet, very humble way,” Huger said.

Bill Frack is not so quiet now.  His voice, encouragement and financial support have lifted the Falcon program to where he believed it belongs. Credit him with a major assist.