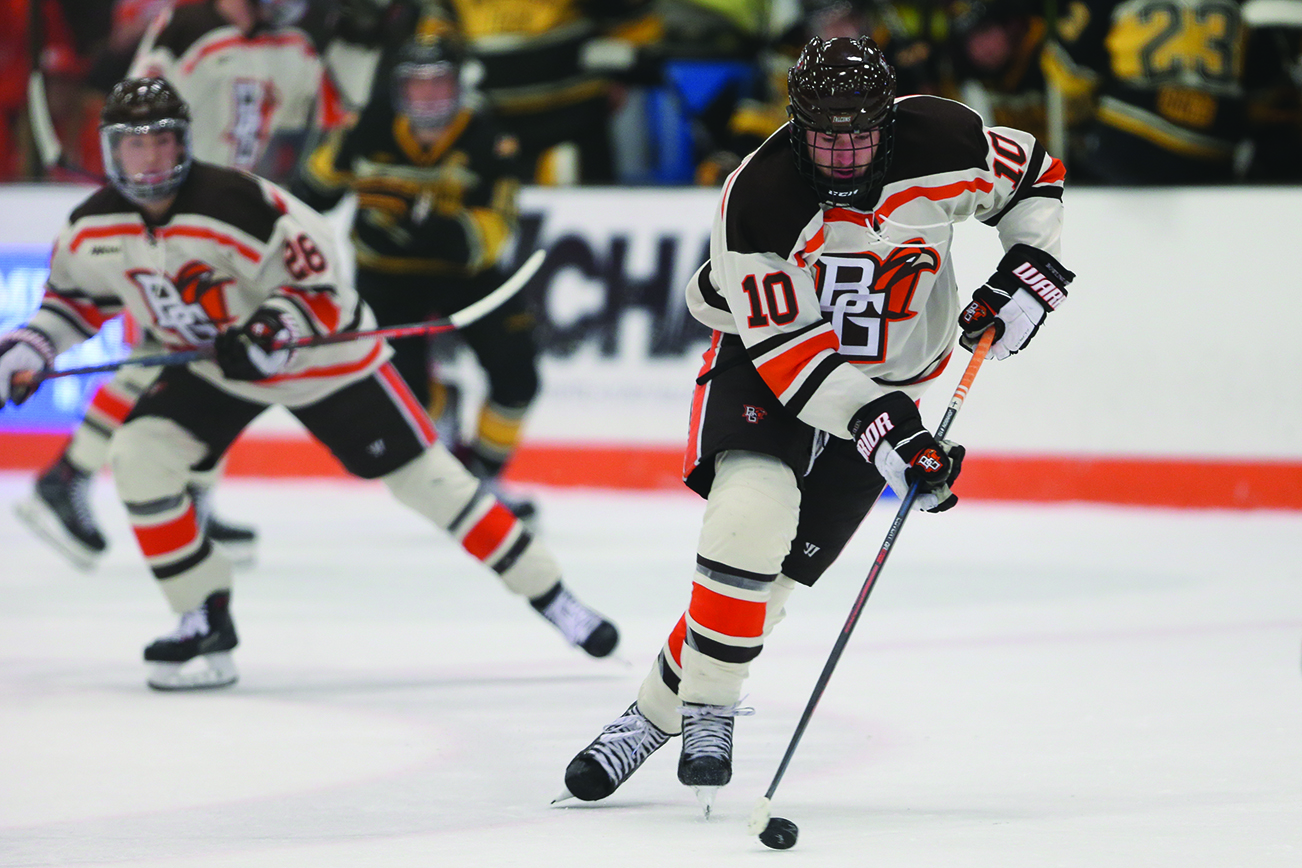 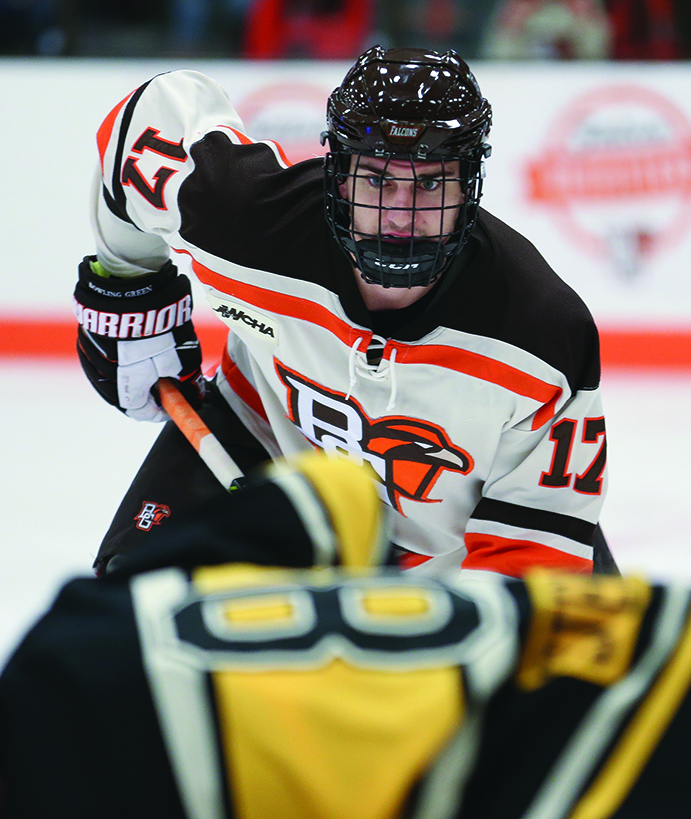 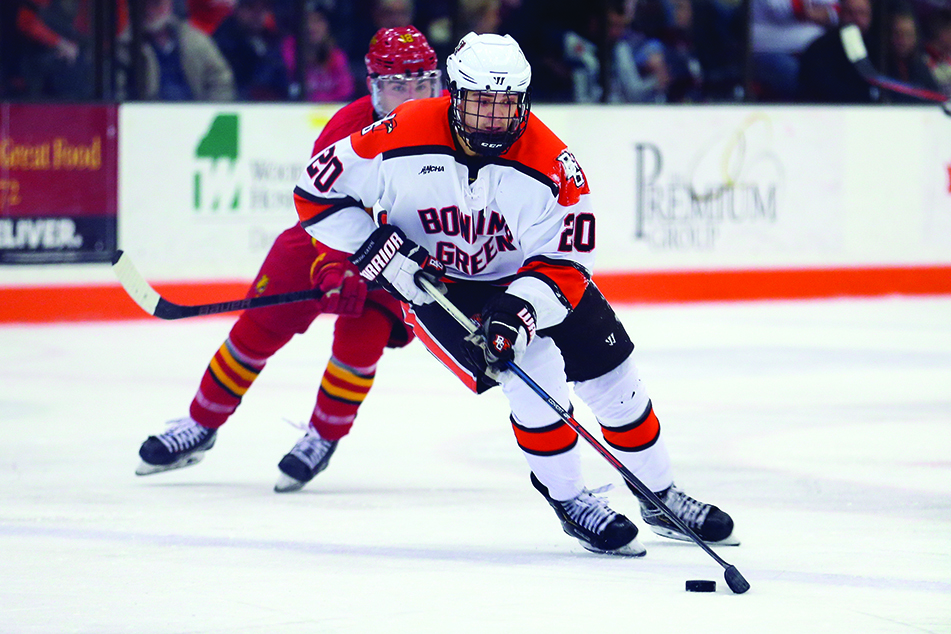 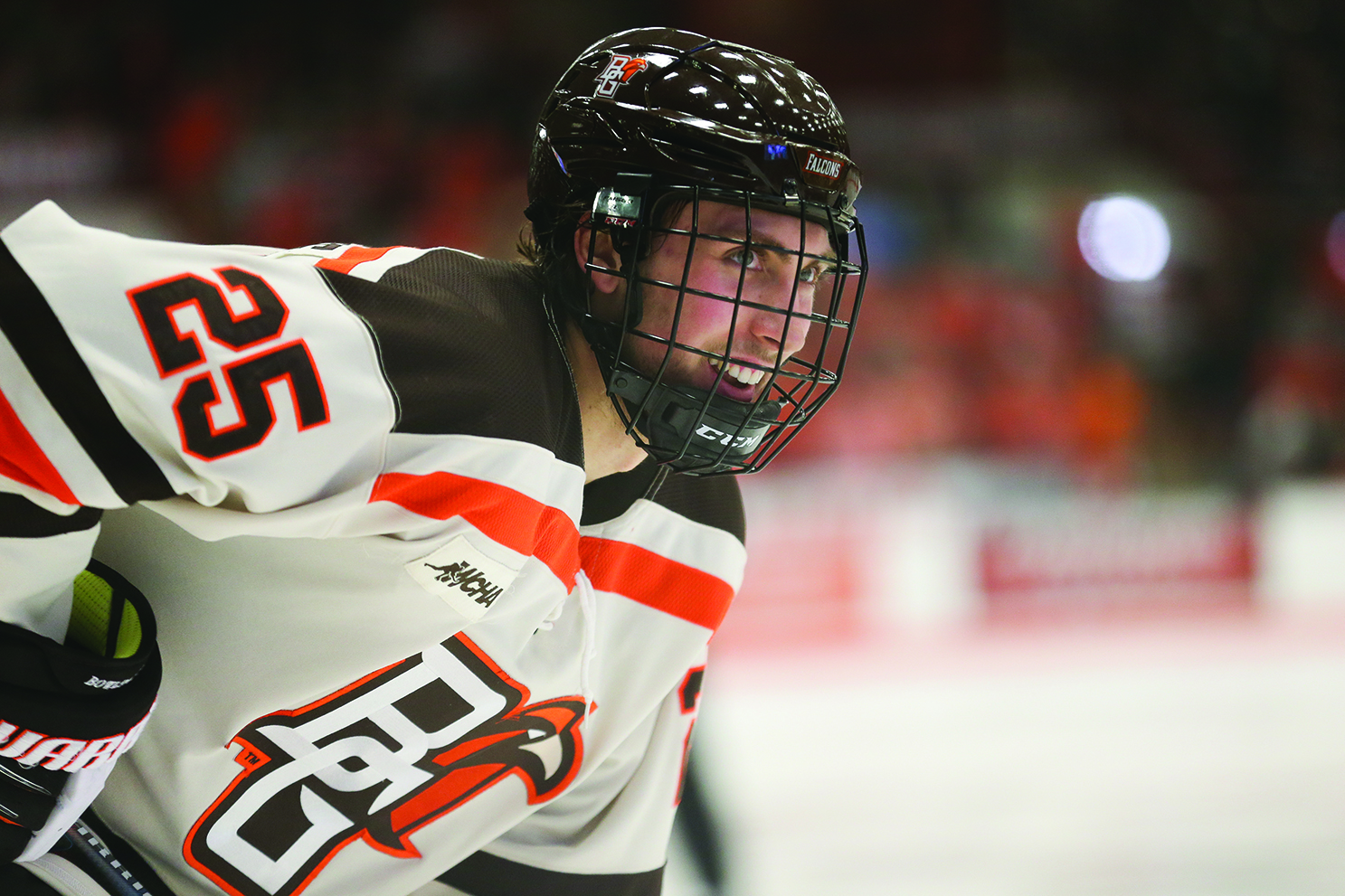 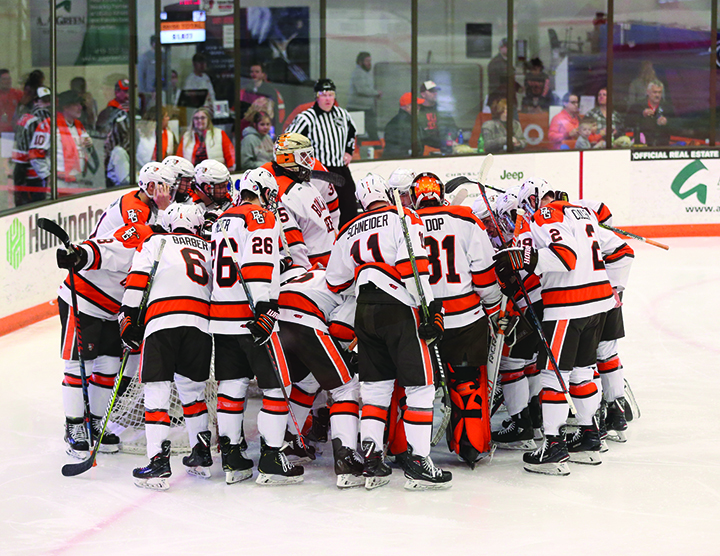 When the Bowling Green team took the ice in Allentown at the end of March, competing in the NCAA Tournament for the first time in nearly three decades, it was much more than another hockey game. For this proud program with such a rich history, a national championship banner hanging in its arena, and a legion of former players having moved on to success in the professional ranks, this was about reclaiming its place in the sport.

“Going to Allentown, as many people as we had there . . . it kind of gives you chills to see the great support the program has,” said Scott Slater, who has been a strong advocate for Falcon Hockey for more than three decades. “Bowling Green Hockey is an exciting thing again, and we look for it to get even better.”

The Falcons posted a 25-11-5 record in the 2018-19 season, winning more than 20 games for a fifth straight time, and registering their sixth consecutive winning season.

New BG head coach Ty Eigner is just as pleased as everyone else that the Falcons reached the NCAA Tournament in 2019, ending that lengthy absence, but he also wants to add some big-picture perspective to that celebration.

“What these players accomplished this past season is outstanding, and something everyone associated with this place should be extremely proud of,” he said, “but going forward, I don’t believe there is anyone involved in our program who feels like we’ve arrived and we’ve accomplished what we want to accomplish.”

Current team members echoed those sentiments. Sophomore Brandon Kruse, whose second-period goal gave Bowling Green a 1-0 lead in the NCAA matchup with Duluth, said the experience will be extremely valuable as the team looks ahead.

“Hopefully, we’ll be on the right side of things next year,” Kruse said. “We’ve played the best, and obviously we showed that we’re right up there with them.”

Kruse said reaching 25 wins in the 2018-19 season, advancing to the conference tournament final, and making the much-celebrated return to the NCAA field reinforces the positive trajectory for BG Hockey.

“The season was unbelievable and a real historic one for the program and the community,” he said. “The seniors are leaving this place better than they found it, and we’re determined to do the same thing, just keep making things better and better.”

Sophomore Max Johnson said the Falcon players understand the tradition at Bowling Green and the importance of aiming even higher in the coming years.

“With our season, we made history for the program and we’re so proud of that, and doing it for our community,” he said, “and we plan to come back next year, stronger and better.”

Eigner said he came away from the one-on-one post-season meetings with the players feeling very comfortable with the program’s culture.

“It was our responsibility to talk to them about the season, and what we felt they needed to do moving forward, and I can say that to a man, they are all incredibly excited about the future,” Eigner said.

“I’m thrilled to be the head coach at Bowling Green and to have the opportunity to lead these young men, but I can tell you that no matter who took over, they were going to take over a program that was in a good spot. And one that had been built the right way, and that’s a testament to the players that are here.”

Eigner said reaching the NCAA Tournament was the culmination of nine years of hard work and commitment by the players who have worn the brown and orange.

“They had a part in building the standard, and the standard is now in place,” he said. “They’ve elevated this to a program where the standard is 25 wins, playing for a league championship, and making the NCAA tournament. If we can continue to do everything we have been doing, then we can play anyone, anytime, and beat them.”

Slater said the accomplishments of the 2018-19 season, taken in context with the dramatic revival of the program over the past nine years, have put BG back on the map.

“I think the greater hockey community considers us relevant again, and that is very important,” he said. “I would say we are considered by many as one of the top 15 programs in the country again.”