directleft Back to Summer 2019 RollAlong! Inside Falcon Athletics Table of Contents

A Coach Who Loves to Teach 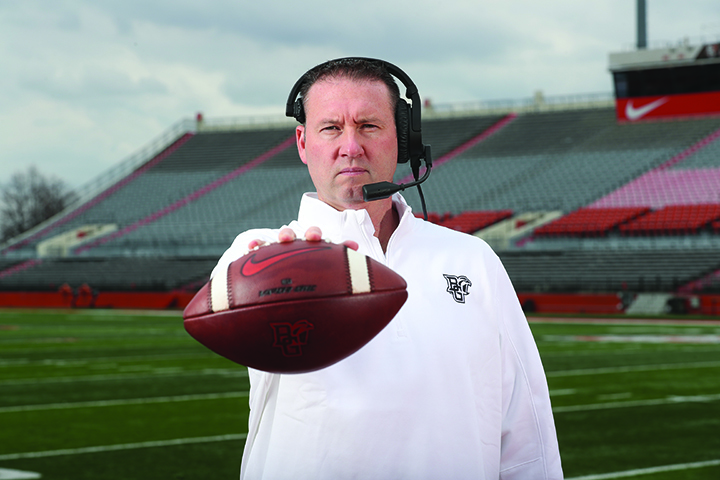 “Scot is a tremendous teacher who loves the game of football. His passion, attention to detail, and his leadership skills will enable him to run a championship program at Bowling Green.” 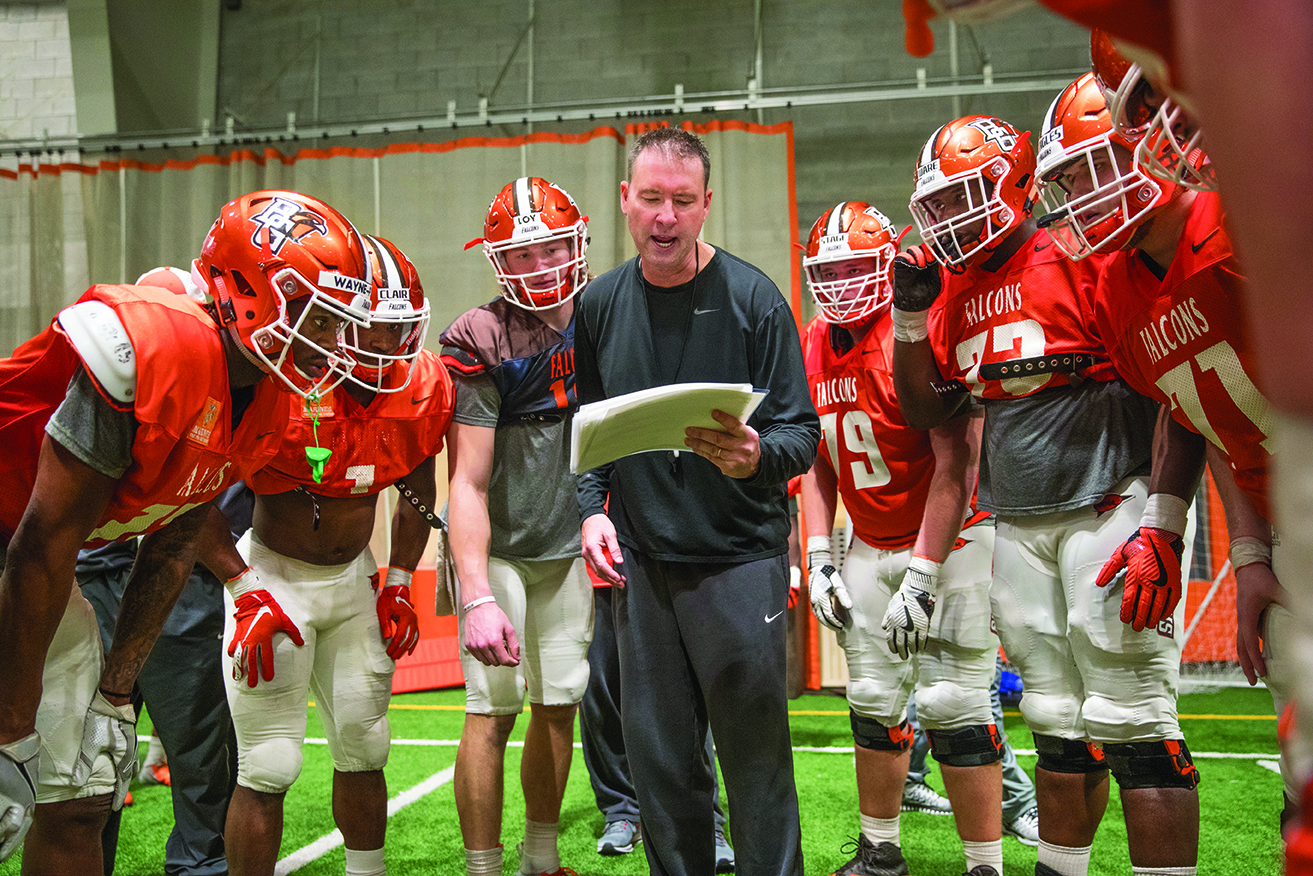 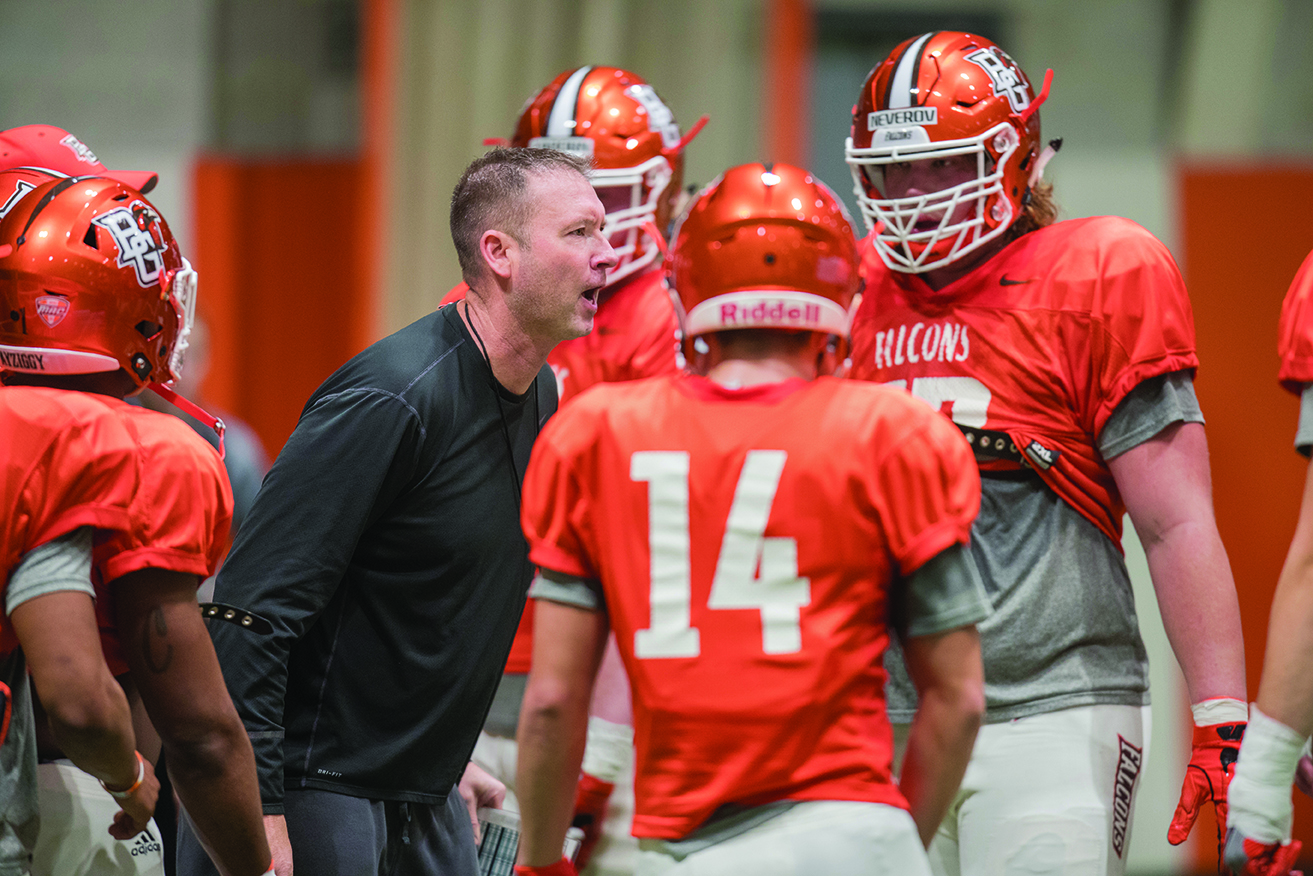 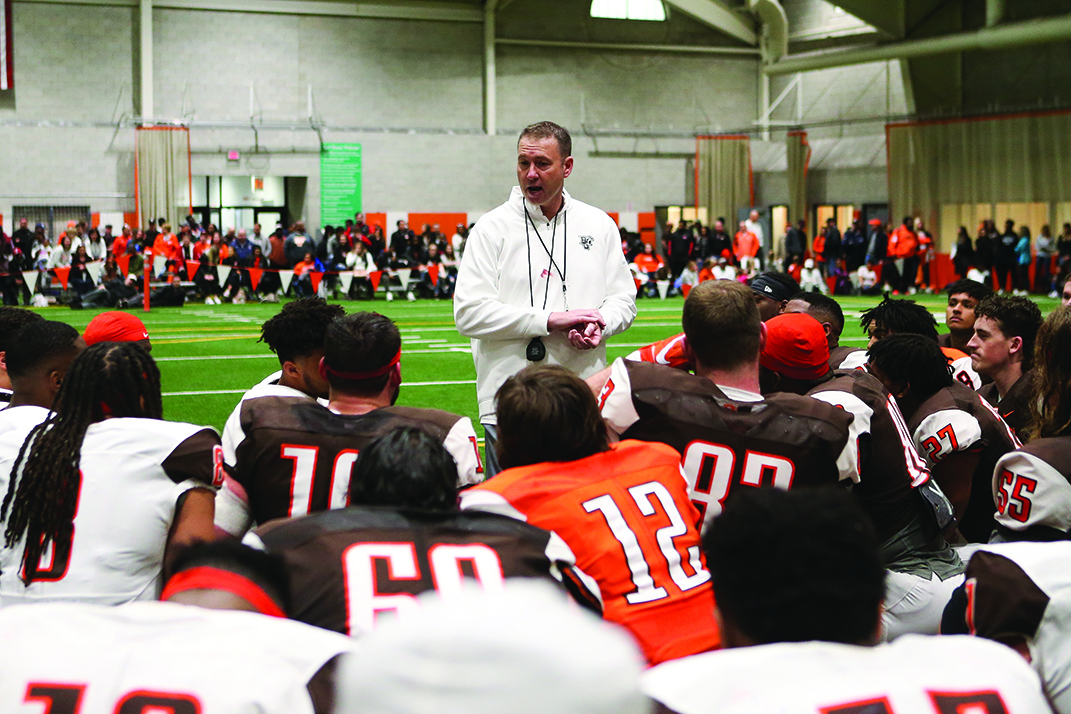 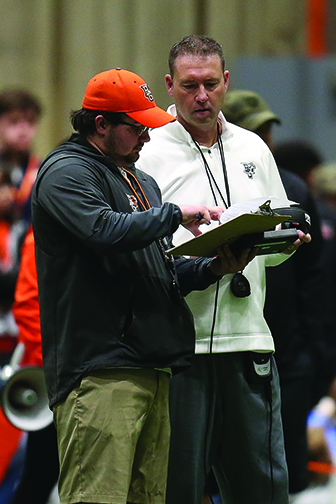 In one of his first practices with the Falcon Football team, Scot Loeffler wasn’t perched up on a platform, surveying the field as his players and staff worked on the various facets of the game below. And he wasn’t talking about the complexities of the offense, or mulling over an array of pass coverages.

The new head coach of the Falcons was down in the huddle, he was blowing his whistle, and he was explaining, pointing and teaching. Loeffler was engaged with his players at eye-to-eye level, demonstrating the subtle nuances of the game, including something as basic as proper football position.

Other head coaches might prefer to take the upper management role and do most of their work in the meeting room or in the big office above the stadium. Loeffler, who spent more than two decades in the college and pro ranks as an assistant coach and offensive coordinator, needs to teach.

“I understand the CEO part of the job, that there has to be one voice to set the message for the program, but I want to be very involved with the players and the coaches. That’s just who I am,” the former University of Michigan quarterback said about his hands-on, interactive coaching technique. He likes being on the field where the intensity of the effort is palpable.

“I feel very comfortable coaching that way. I think that’s the trend, to have a great staff around you, but to still be very involved.”

Loeffler’s coaching resume includes work at Michigan, Florida, Auburn, Virginia Tech, Boston College, Temple, Central Michigan and with the NFL’s Detroit Lions. His participatory instructional approach has been used with seven quarterbacks he coached who went on to the NFL, including Tom Brady, Tim Tebow and Brian Griese.

Brady, the winner of four Super Bowl MVP awards, strongly endorsed Loeffler’s proficiency with instruction and communication with his players.

“Scot is a tremendous teacher who loves the game of football,” Brady said. “His passion, attention to detail, and his leadership skills will enable him to run a championship program at Bowling Green.”

“Of all of my assistant coaches, Scot is one of the most intelligent and creative minds I have ever been around,” Beamer said. “When Scot spoke, I listened and valued what he had to say.”

Loeffler said he comes to the BG head coaching job as his own man with his distinct style, but credits much of his skill set to the people he has coached with, a group that includes former BG head coach Urban Meyer, the winner of three national championships.

“No doubt when I sit back and name the people I’ve worked for, they were absolutely instrumental in my career,” Loeffler said. “I’ve taken a little bit from each of them, and then formulated what we want to do here, and how we want to go about our business with this football program.”

An early step in that effort was spring practice, and as the Falcons concluded spring ball, Loeffler took note of the progress the team has made, and the considerable work in front of them.

“We started with some pretty fundamental things, but fundamentals are a point of emphasis at all times,” Loeffler said. “Besides that, we’ve put a lot on them, but we’ve had a good spring and it’s been a pleasure to watch these young men go from where they were, to where they are right now. We’ve still got a long way to go, but it’s a positive thing, how far they’ve come.”

Loeffler said he and his staff have been focusing their recruiting efforts on the abundance of talent within a four-hour drive of Bowling Green, territory the Ohio native finds very familiar.

“It’s comfortable, because I was born here, I played in the Midwest in college, and I’ve recruited this area all of my life,” he said. “I know the Mid-American Conference and know that it is very competitive and that you better be on top of your game every day.”

Loeffler said that when the job offer came from Bowling Green, the strong history and tradition here were evident, the timing was right, and the fact his wife Amie is a BG graduate certainly closed the deal.

“My wife and I were jumping up and down about coming to Bowling Green and being back in the Midwest,” he said. “We were both raised here and we’re so proud of that and the work ethic here. There’s no other spot in the United States like it.”