My primary care physician still marvels at my low cholesterol, low heart rate, low blood pressure, and other typical blood measures, calling them "exceptional, unlike virtually any other patient of his.I started on the path toward a mostly whole food, plant-based diet when I enrolled in 2005 in the WeightWatchers at Work program on campus. I lost 35 lbs. (approximately 25% of body weight) in about six months using WeightWatchers and my exercise regimen of swimming and biking. However, I was still having a number of health issues including BPH, prostate cancer, and ulcerative colitis (which required annual colonoscopies).

When Craig Zirbel loaned me a copy of The China Study in August of 2011, I found it fairly easy to switch to a completely plant-based protein diet (as also encouraged by the WellAware Eat Right for Life Program) because I already was eating relatively little meat as a result of WeightWatchers. For some reason, giving up dairy and eggs was not difficult either. I was surprised that my exercise performances started to improve almost immediately. The "myth" that athletes need extra animal protein to replace damaged muscle appears not to be true at all. For the first time in my life (after 47 years of competitive swimming), I actually earned a medal at the National Masters Swimming competition after 8 months on the whole food, plant-based life style (a term favored over "diet" by T. Colin Campbell, author of The China Study and the new book, Whole: Rethinking the Science of Nutrition, which I STRONGLY recommend!). 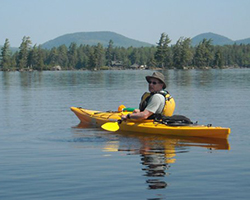 Last year, at my annual colonoscopy after approximately 18 months on the lifestyle, the gastroenterologist said that it appeared as if I had never suffered from colitis at all (which I had for over 25 years). Apparently, all the lesions, tissue scarring, and other evidence had disappeared completely. My primary care physician still marvels at my low cholesterol, low heart rate, low blood pressure, and other typical blood measures, calling them "exceptional, unlike virtually any other patient of his.