Staff recognized in three categories at the 2016 NIRSA Conference. 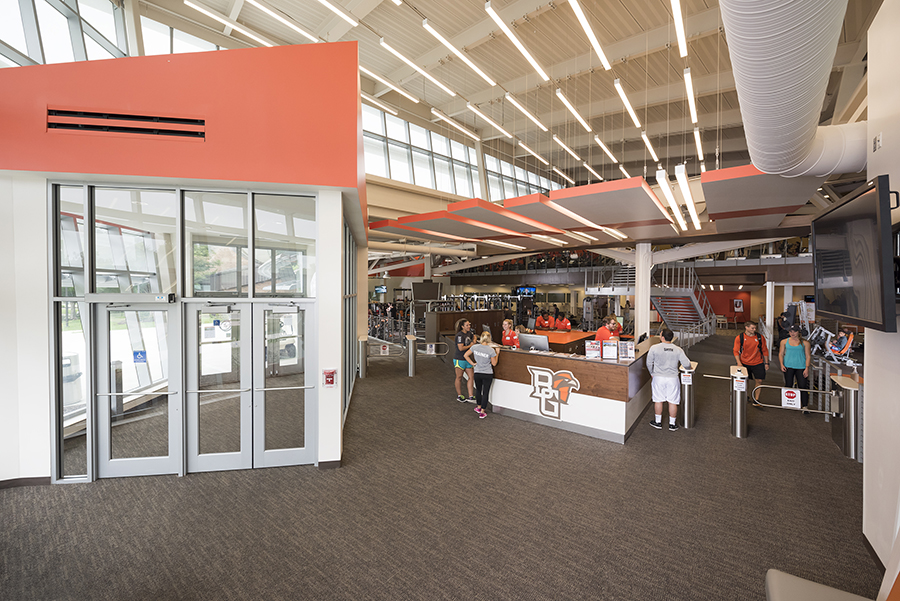 University Business Magazine featured the Student Recreation Center in the December 2014 issue, highlighting the "wow" factor of the newly renovated facility as well as the newly designed, welcoming front entrance. The judges also noted the increased accessibility to the upper and lower levels of the facility. 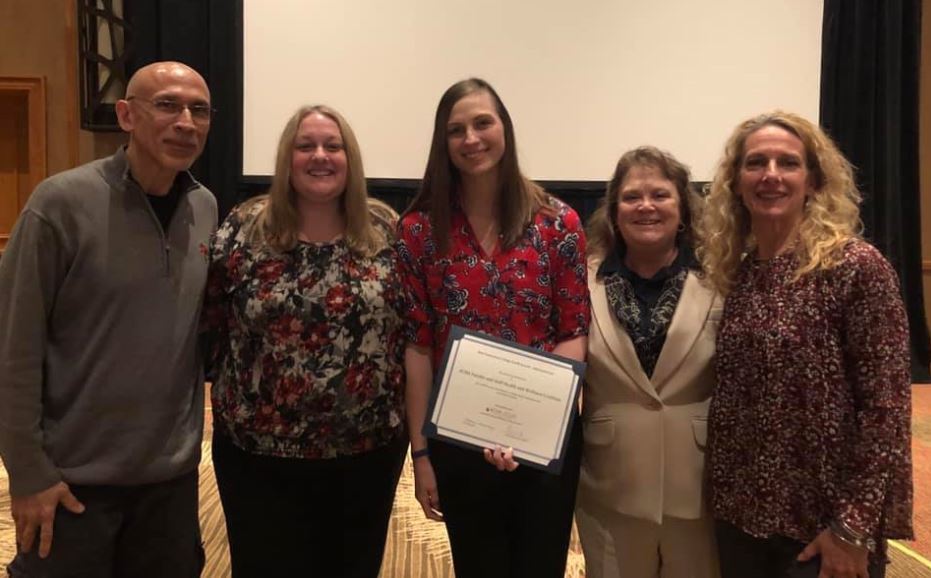 Presented to Faith DeNardo, Wellness Connection Director, and other colleagues from across the country who work with the coalition.

The HealthLead™ US Healthiest Accreditation Programs recognize organizations that demonstrate best practices in health management and well-being.  HealthLead™ is designed to set the standard for workplace and campus health management by expanding the definition and breadth of health to include integrated well-being support services and engagement and leadership in community health issues. HealthLead™ helps organizations learn and continue to improve the quality of delivered services.  www.ushealthiest.org

Find this article on Zoom News. 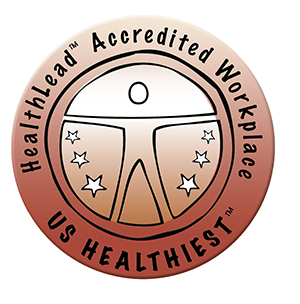 It's On Us Committee – 2015-16 Collaborative Effort Award

Be the Creed Peer Education Programming: 2018 BACCHUS Program of the Year 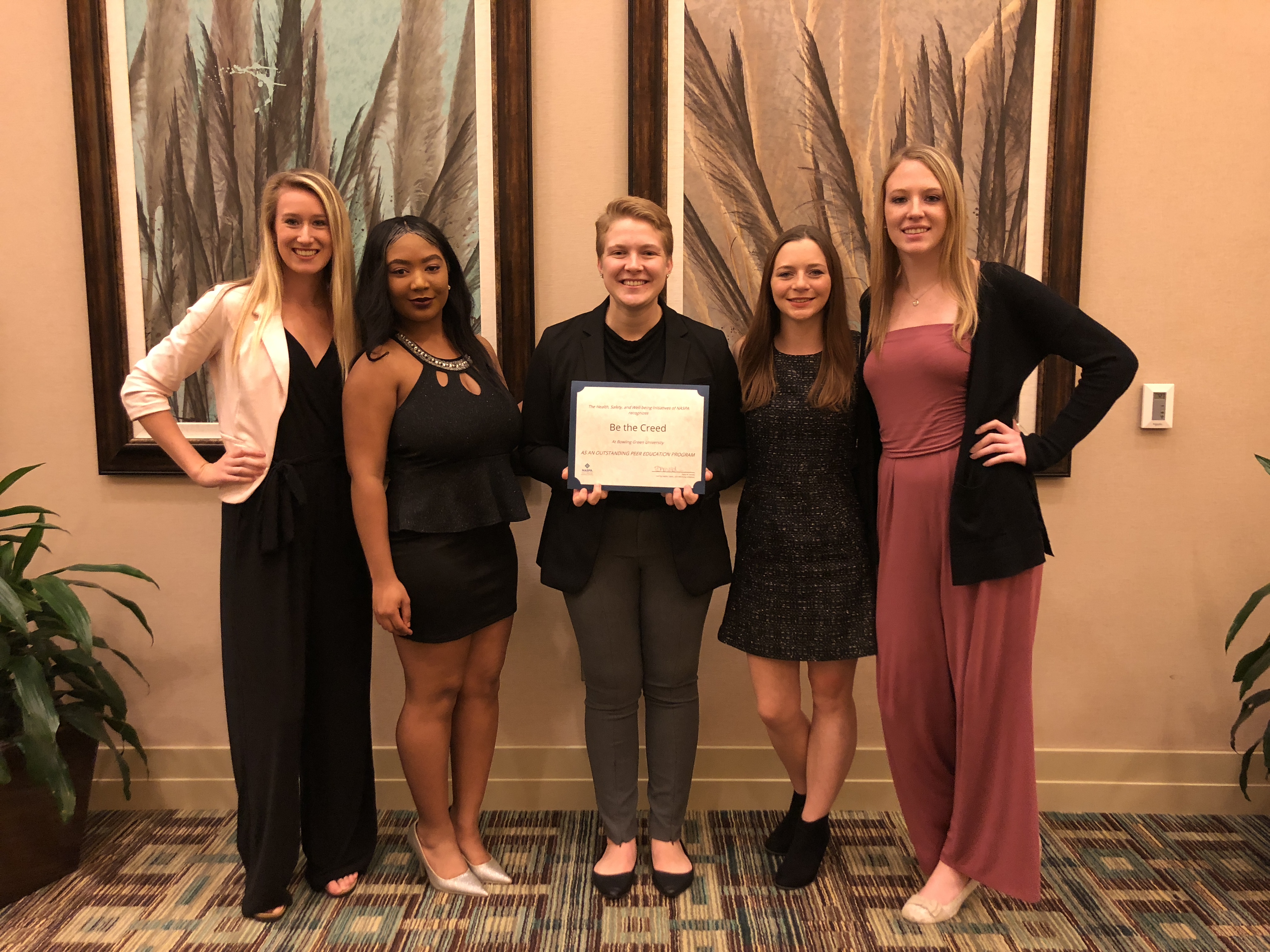 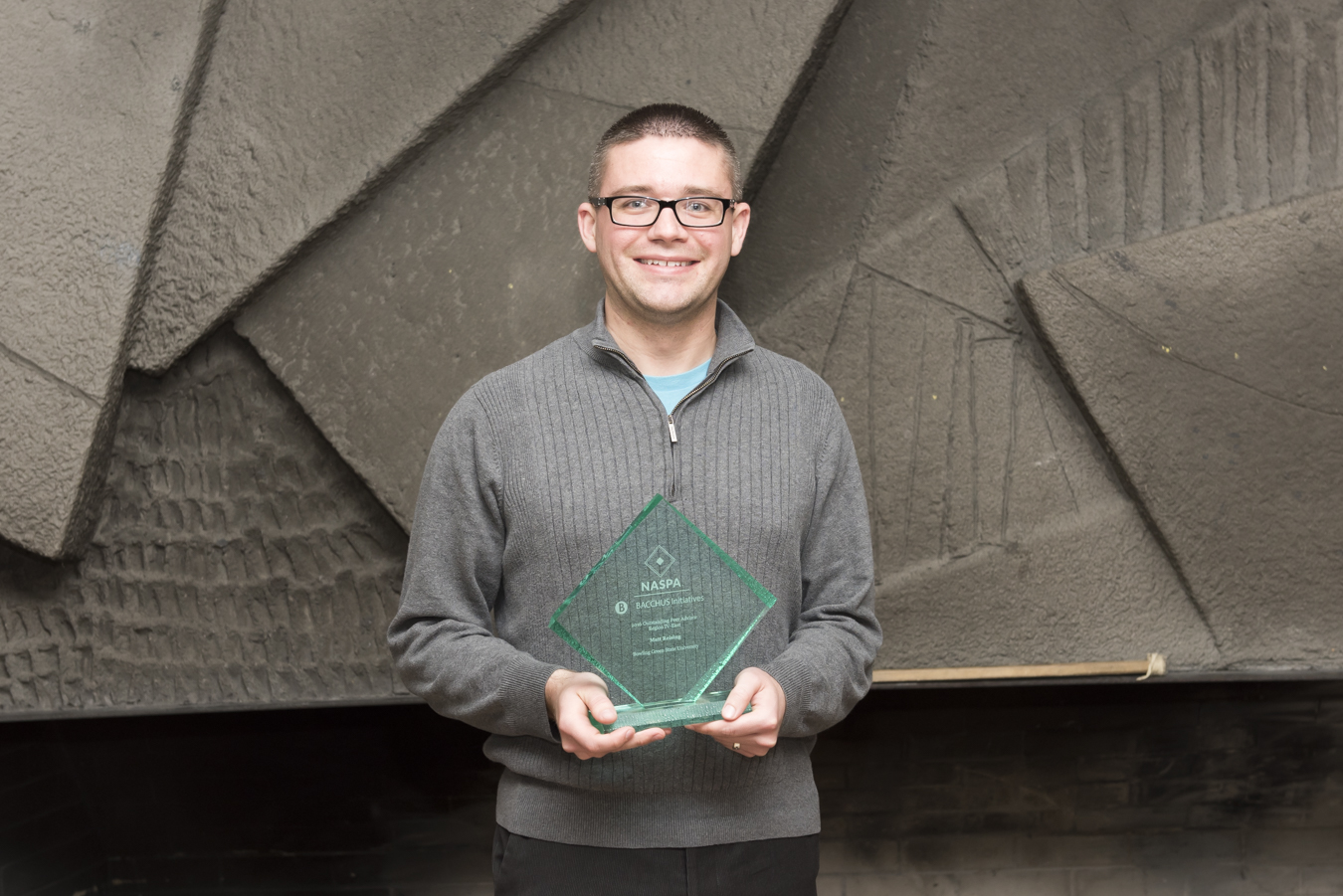 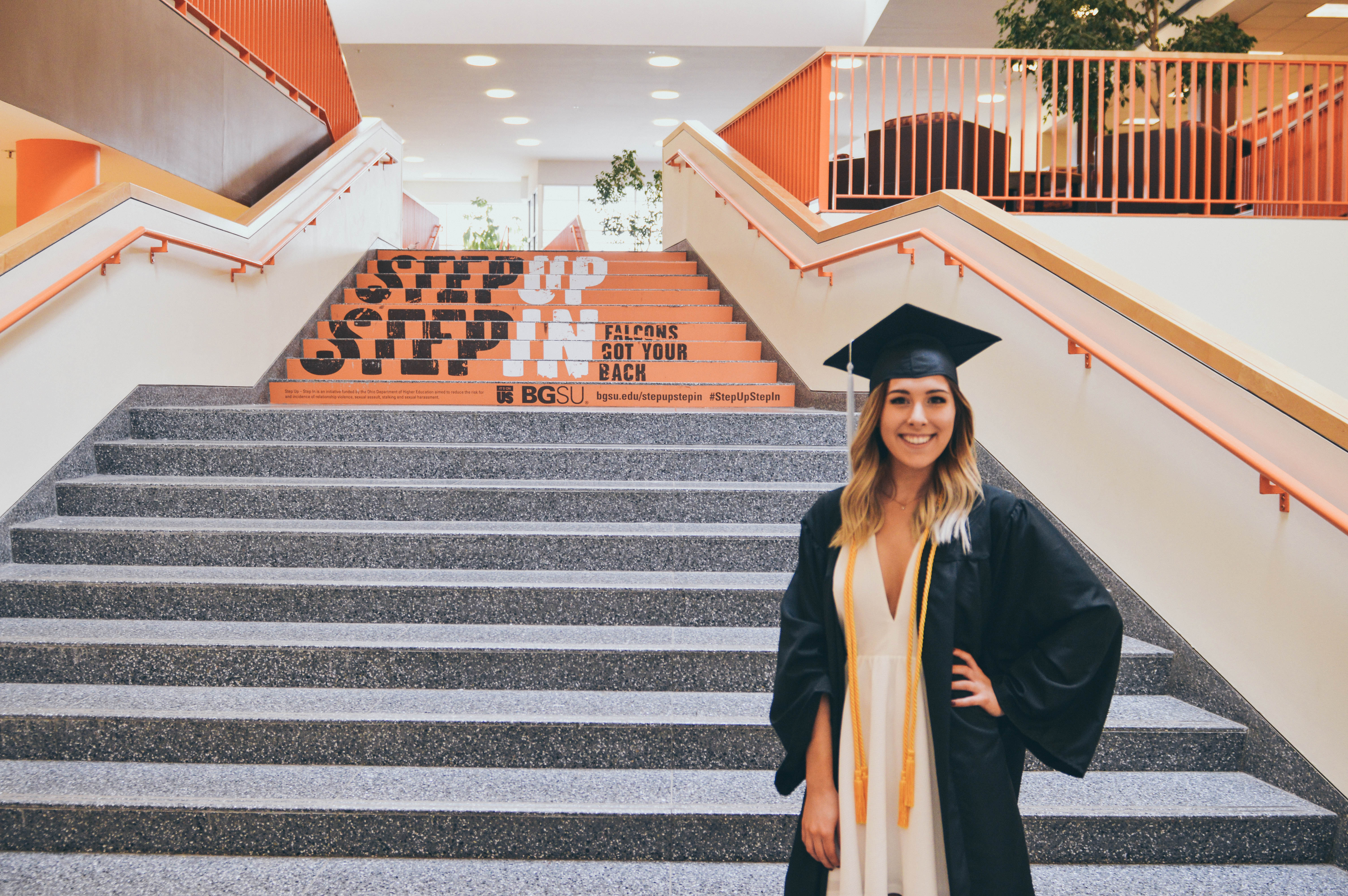 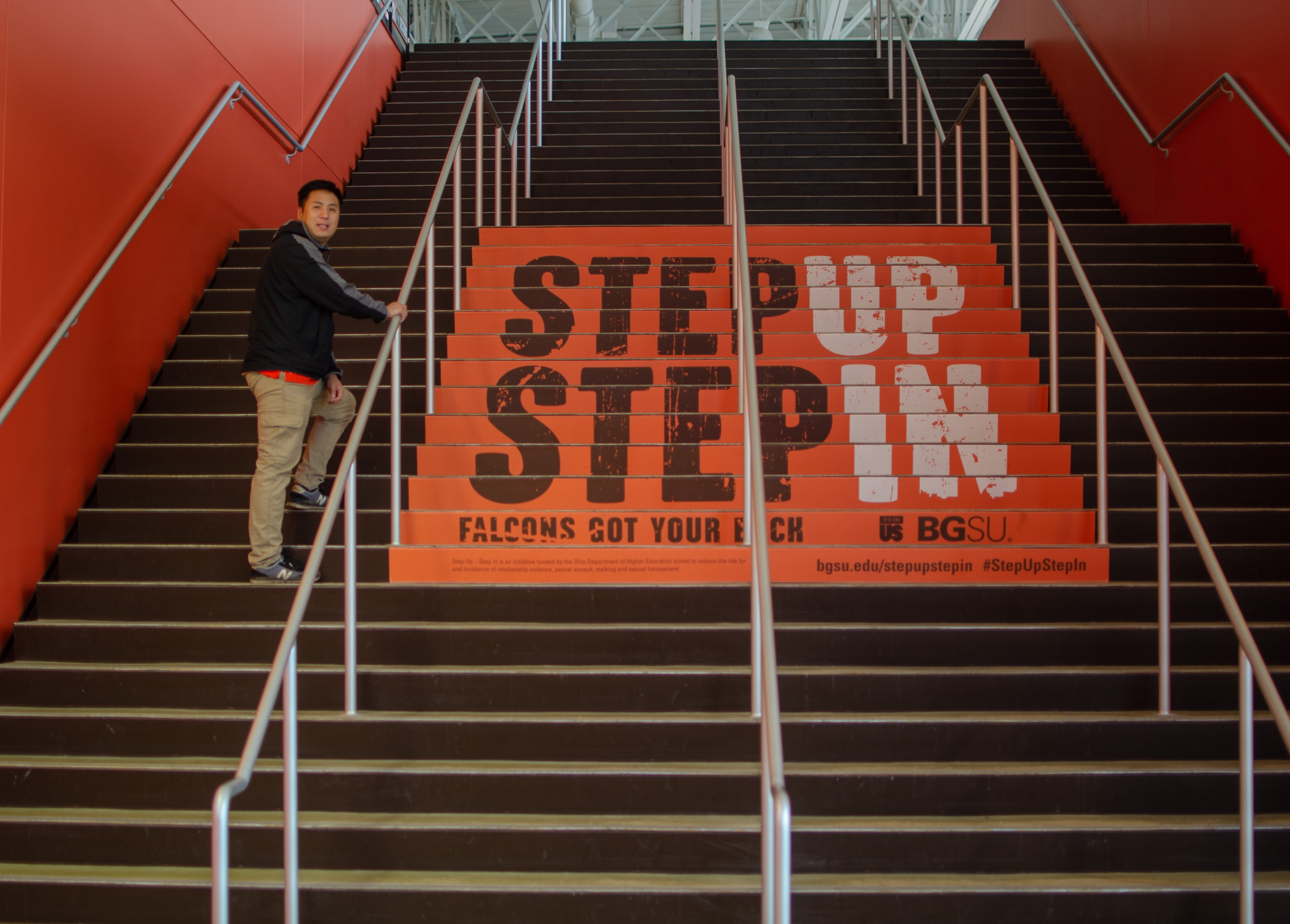 The BGSU Wellness Connection’s Interactive Installations submission was the “Step Up-Step In” campaign, whose messaging emphasizes bystander intervention strategies. The phrases “Step Up-Step In” and “Falcons got your back” were marketed to students, faculty and staff on T-shirts, flyers, social media, digital screens and other physical outreach formats. The overall purpose of the campaign was to encourage active participation in creating a culture of shared respect at BGSU.

The two phrases and installations were meant to “help make your residence hall, classrooms, activity spaces, and the entire community a place where others feel safe and protected. Let those who live, work, and learn here know that you’ve got their back,” according to Faith Denardo, wellness connection director and Title IX deputy coordinator.

The installations were inspired by Wellness Connection’s Bystander Intervention programming and It’s On Us initiative. The “Step Up-Step In” message calls students and the community to action to intervene and help prevent sexual violence. Funding for the installations came from a grant from the Ohio Department of Education for Changing Campus Culture received by Recreation and Wellness for the 2017-18 academic year.

The large-format graphics were placed throughout campus on staircases and murals, where they could be seen by anyone using the Bowen-Thompson Student Union grand staircase or Stroh Center south staircase, or visiting the Falcon Health Center, Student Recreation Center, Slater Family Ice Arena, Title IX Office and the Center for Women and Gender Equity. For maximum impact, they were designed and installed creatively to encourage interaction and support for the initiative. For example, willing participants were able to engage with the signs by physically stepping over the messaging and up a staircase located between the first and second floors of the Union.

“I’m most proud of the multiple collaborations that made the project possible in the first place,” said Lona Leck, assistant director of Recreation and Wellness. “And the volume of support our department has received from all divisions on campus and the level of involvement from so many students who believe in the message and in making a difference is humbling and inspiring.”

This Tiki-Toki timeline features a diverse selection of photos, videos, and personal stories throughout the history of the department. It is part of a modern marketing plan that honors the past, and celebrates the future.

The timeline was developed after uncovering several boxes in a storage room at the Student Recreation Center prior to the 2013-14 facility renovation. Photographs of staff from the past, artifacts from anniversary celebrations, old t-shirts, complete photo albums, and other items including meeting minutes, event agendas, programs, and numerous documentation were uncovered. The decision was made to develop an interactive digital timeline that would provide a long-term place where stories about the history of the department could be cataloged for readers to enjoy for years to come, and in which new stories could continuously be added as new items and information are uncovered. Over time the focus of the project expanded to encompass the history of recreation at BGSU from its founding in 1910 to present day. The target audience includes current BGSU students, faculty and staff, and community members as well as BGSU alumni who are provided the opportunity to contribute to the ever growing history and remember their time at BGSU as employees or participants in recreation programming.

Erica conducted much research in creating this timeline. Each photo or artifact told a story, but additional work was necessary to uncover the complete story. Individuals shown in photographs and referenced in various documents as well as long-term staff were contacted for interviews, and additional research was carried out at the BGSU Center for Archival Collections, the Wood County Courthouse, and online. All of the information was compiled and synthesized to create each story, and references were included for each source. Additionally, many photos were low quality or damaged from years of storage and were repaired in Photoshop.

The project was launched in January 2016 as part of the RecWell Rewind campaign, and content is circulated weekly on social media, the RecWell blog, campus closed circuit television screens, and on RecWell homepage banners. The help of practicum students, Alexia Chesbrough and Brent Darah, has been critical to the success of the campaign. 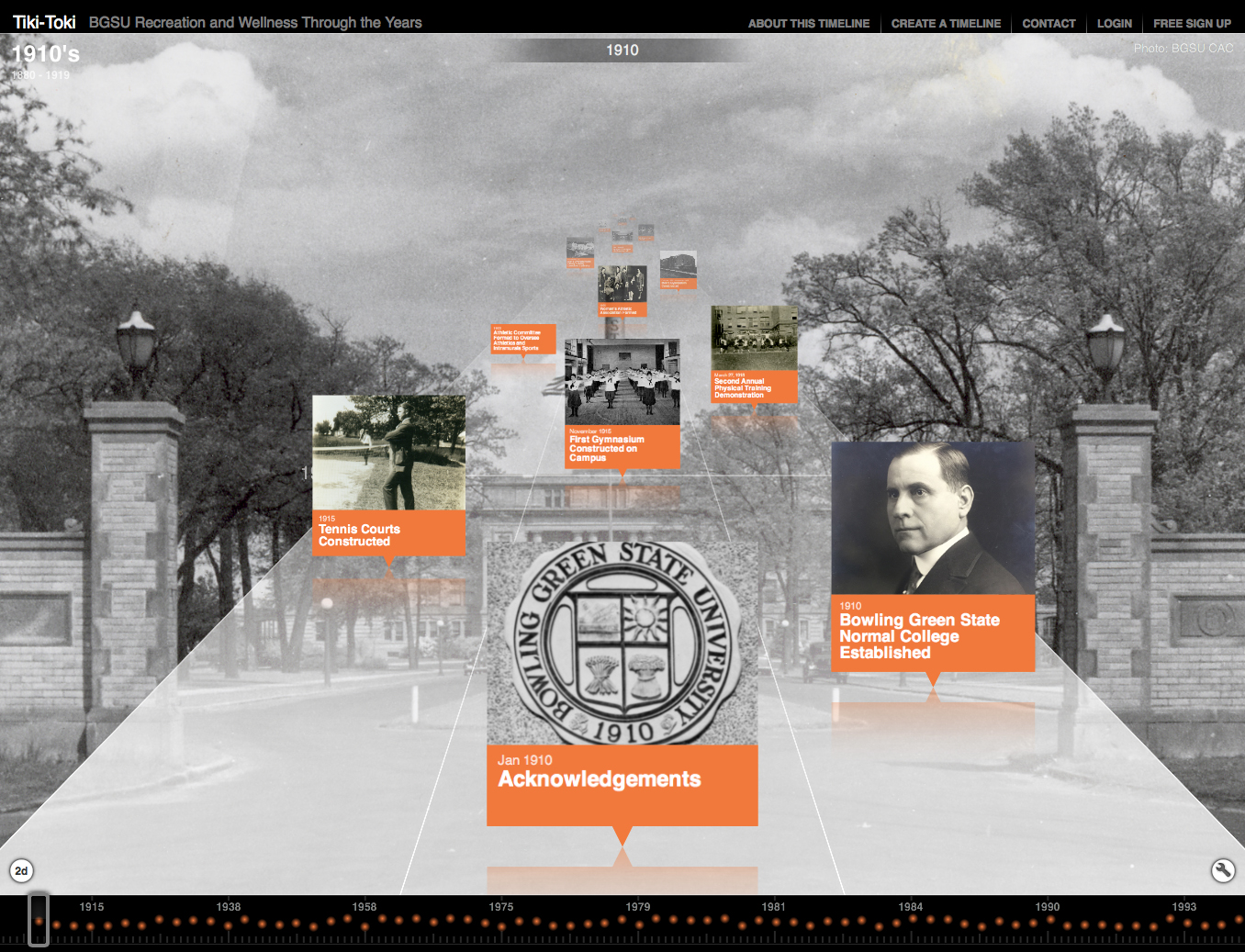 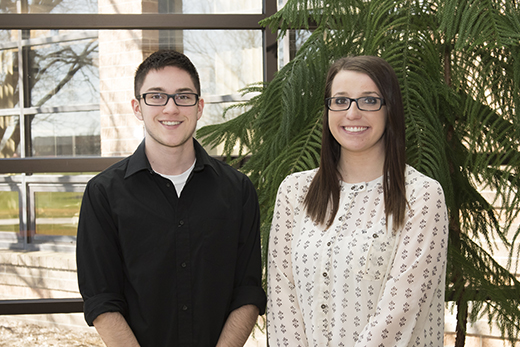 The Recreation and Wellness website was designed as the ultimate source of information about the department including programs, events, schedules, policies, and facilities for BGSU students, faculty and staff, and community members. The website was completely overhauled during the 2014-15 academic year during the transition from the Rhythmyx content management system to the Adobe AEM content management system. Project goals included improving the website's appearance, branding, and ease of navigation as well as to create a site that was memorable, beautiful, and useful to all audiences. 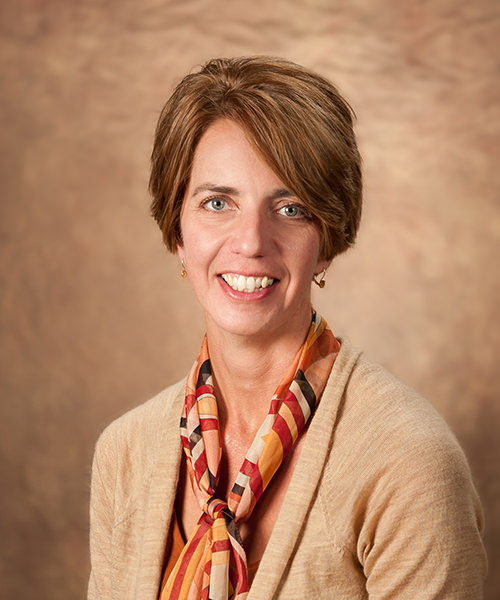 The birthday party coloring book was designed as a unique promotional product for distribution to children attending birthday parties hosted by Recreation and Wellness. The twenty-page booklet contained sixteen unique coloring pages featuring original artwork, a variety of children's activities, and prominently featuring the BGSU mascots and Recreation and Wellness branding. To include an educational component, each page also included the phrase "Happy Birthday" written in a variety of different languages. The booklets also contained information about birthday party packages and birthday party guidelines. 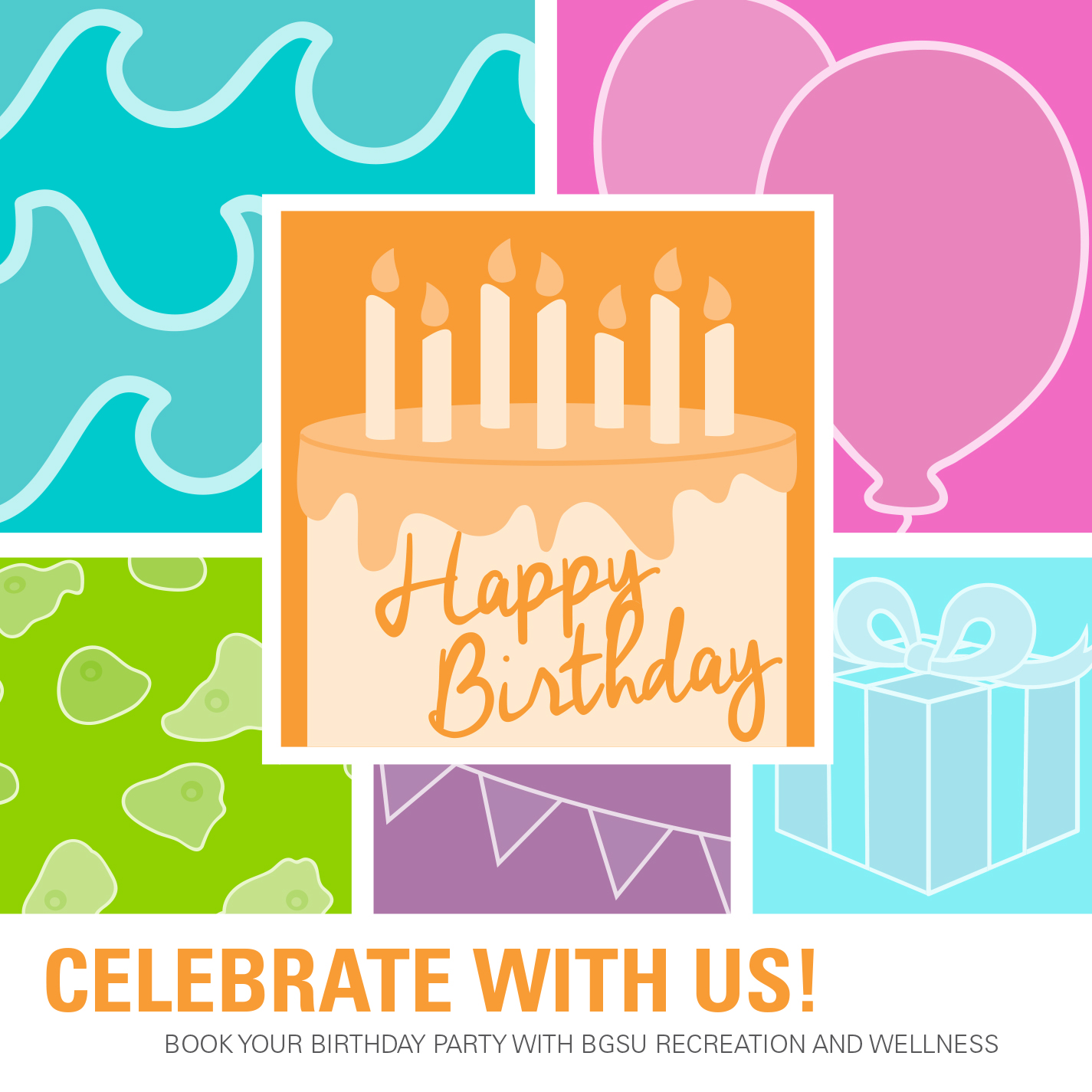 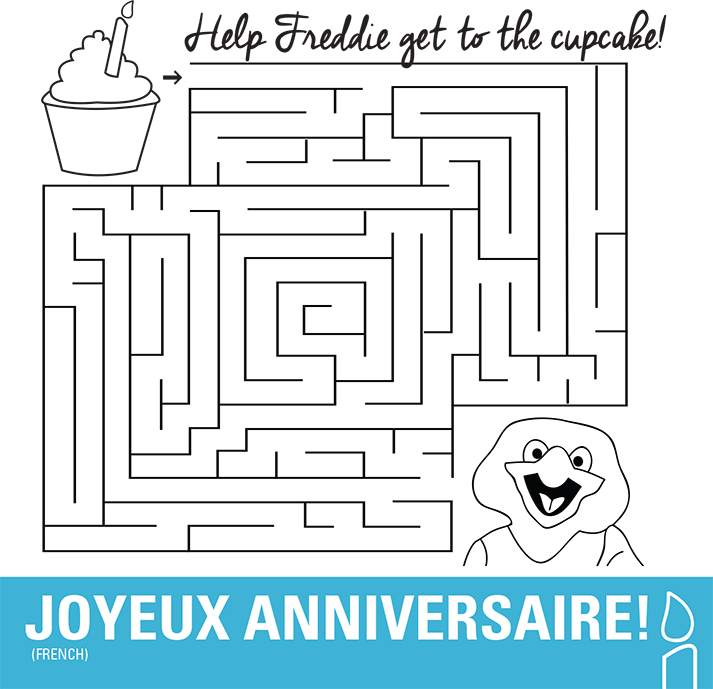 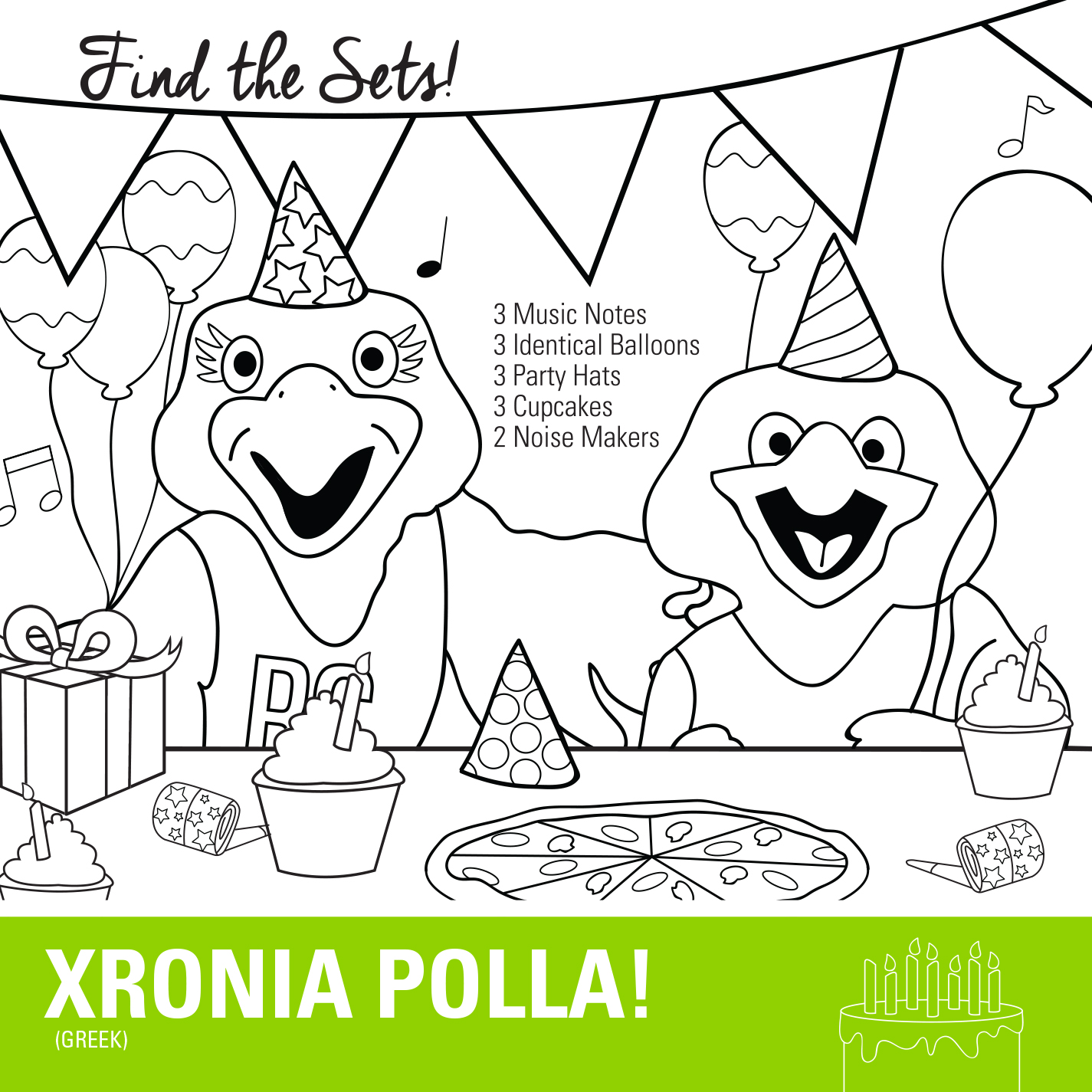 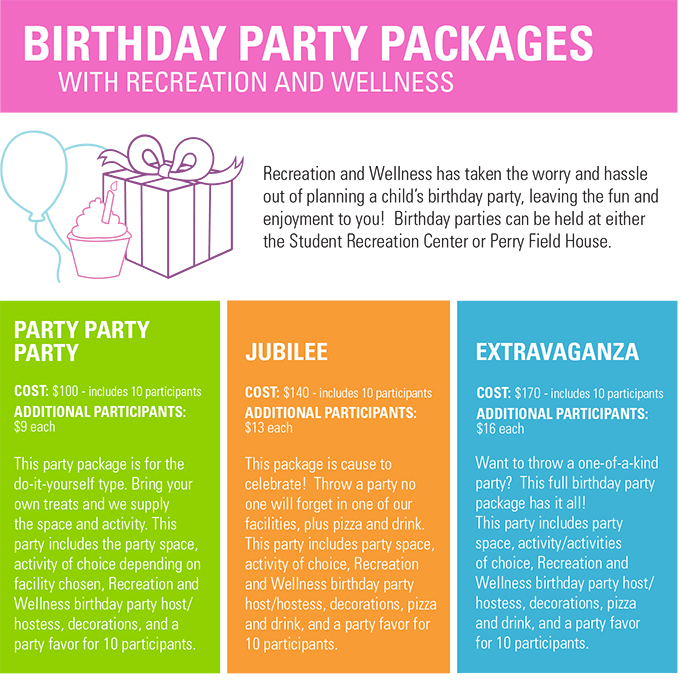 The Recreation and Wellness website was designed to be the ultimate source of information regarding facilities, programming, employment, and general information, and was designed to be interesting, entertaining, and informative. The target audience was BGSU students, faculty, and staff, and community members.

The purpose of the Alcohol Awareness pledge flyer was to raise awareness against drinking and driving, and it primarily targeted students at BGSU. Flyers were distributed to numerous students at the Bowling Green State University Recreation Center.

The brochure was designed to recruit prospective graduate students to BGSU Recreation and Wellness, and the target audience included juniors and seniors at colleges and universities throughout the country as well as others attending NIRSA or ORSA events. It was designed to be delivered to students by our professional staff at conferences and to be downloaded from the website. The goal of the piece was to briefly describe the graduate assistantships offered through the department; to outline the application process, deadline, and requirements; and to convince graduate students that an assistantship with Recreation and Wellness would be a fun, educative decision. The brochure was designed to look fun and mature, and to represent the next step in these students lives.

This video was designed to promote the department of Recreation and Wellness at BGSU and in the local community with the primary objective of informing viewers of the wide range of programs and facilities that the department offered students and the general public. The video was designed to capture and maintain the attention of its audience by using fast-paced, interesting, and exciting imagery coupled with the use of a clear, informative, and effective monologue.

This poster advertised the 2009 Monster Mash Wellness Bash Wellness Connection Late Night event to the campus community. The Monster Mash is a part of BGSU Late Night Events Programming, designed to give students alternative and healthy late-night entertainment options. Initially, the two-week project timeline was considered a limitation, but the designer had so much fun making it that it ceased to be a worry. The event was a huge success with over 500 students in attendance.

The newly redesigned web presence for BGSU Recreation and Wellness was a graphic representation of the re-branding that had taken place within the University beginning in the fall of 2009; uniting all departments with a distinct and consistent feel. The creative process for the 1000 + item redesign encompassed a six month period of time. The web developer and one student assistant conducted individual meetings with program coordinators for the nine distinct functional areas and the four facility directors resulting in a comprehensive list of updated information, documents, and files needed for the site. Challenged by the limitations in BGSU’s Content Management System, relationships were cultivated with the BGSU Office of Marketing and Brand Strategy and the BGSU Office of Web Development whose assistance was required for the changes and approval of unique and separate navigational necessities; a template all inclusive of left, sub, and right hand navigation. Beyond functionality, the developers personally shot and included over 400 new and unique images of patrons and staff and cultivated content and layout criteria including new web graphic standards, cascading style sheets, and other visual components. 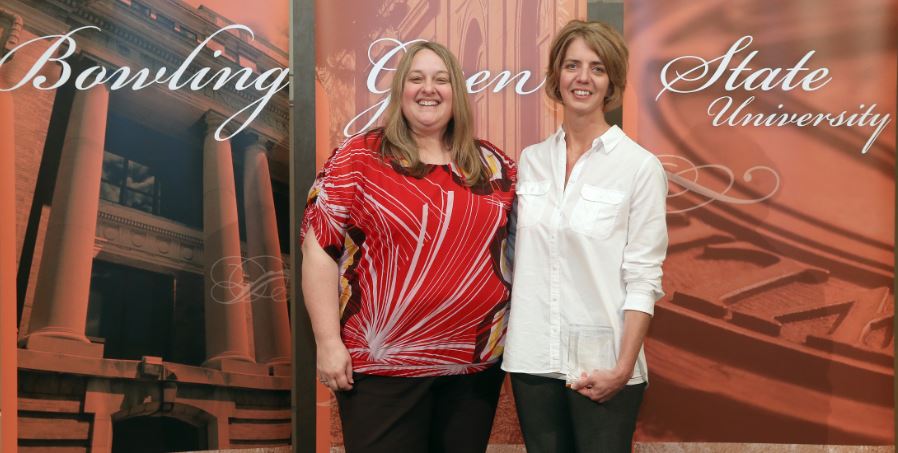