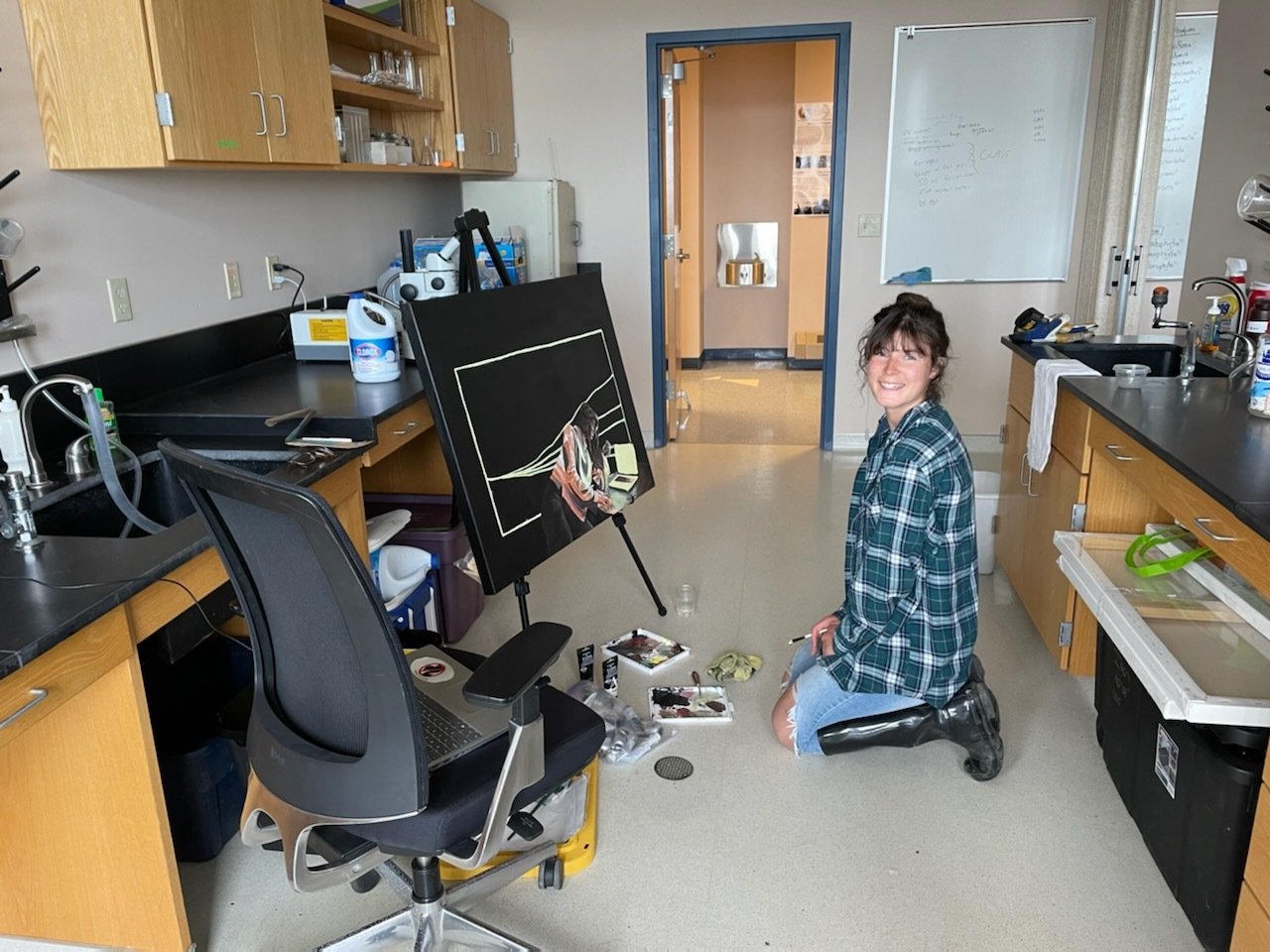 BGSU senior Kate Lochridge creating a visual representation of sea level rise projections as a part of her summer internship in Alaska.

Kate Lochridge, an Honors College student double majoring in marine and aquatic biology and fine arts, spent the summer in Alaska as a recipient of the Ernest F. Hollings scholarship through the National Oceanic and Atmospheric Administration

Kate Lochridge spent what she called an idyllic two months this summer exploring Southcentral Alaska near the Kenai Peninsula, carrying a sketchbook and drawing supplies.

She traversed the mountainous and wooded landscape, listened to glacier ice cracking and interviewed scientists - seeing the effect of sea level change in the region up close.

Lochridge, a Bowling Green State University senior and Honors College student, was in Alaska over the summer as part of an internship through the National Oceanic and Atmospheric Administration (NOAA) Ernest F. Hollings scholarship program. She was one of two students from universities in Ohio chosen for the scholarship among more than 120 students nationwide.

“The work Kate did brings people together who may never read or seek out a technical report on sea level change. Her ability to communicate through art to people who wouldn’t normally come across a topic like this is boundary-breaking.”

The experience allowed Lochridge to combine her interests in science and art to make complex scientific research on sea level change more accessible through visual representations of the topic. Lochridge is double majoring in marine and aquatic biology and fine arts in the College of Arts and Sciences at BGSU.

“Sea level change impacts everything from housing development to conservation to the economy,” she said. “What I’m doing with my art is taking the incredibly useful and important research that already exists and putting it into a new context so more people can access it.”

Dr. Nic Kinsman, Lochridge’s mentor, developed the project as a novel way to engage with the public on climate issues. Kinsman, Alaska regional geodetic advisor at NOAA, said she wanted to reach people outside of the scientific community.

“The work Kate did brings people together who may never read or seek out a technical report on sea level change,” she said. “They’re introduced to this science through a whole new pathway. Her ability to communicate through art to people who wouldn’t normally come across a topic like this is boundary-breaking.”

Lochridge spent six months researching the global impact of sea level change around the world before arriving in Alaska. Many of the examples she read about in scientific journals were evident in the Kenai Peninsula and Seldovia, Alaska, where she spent most of her time.

“You can read about things and conceptualize them in your brain, but it really makes a difference when you can connect them to real, physical examples,” Lochridge said. 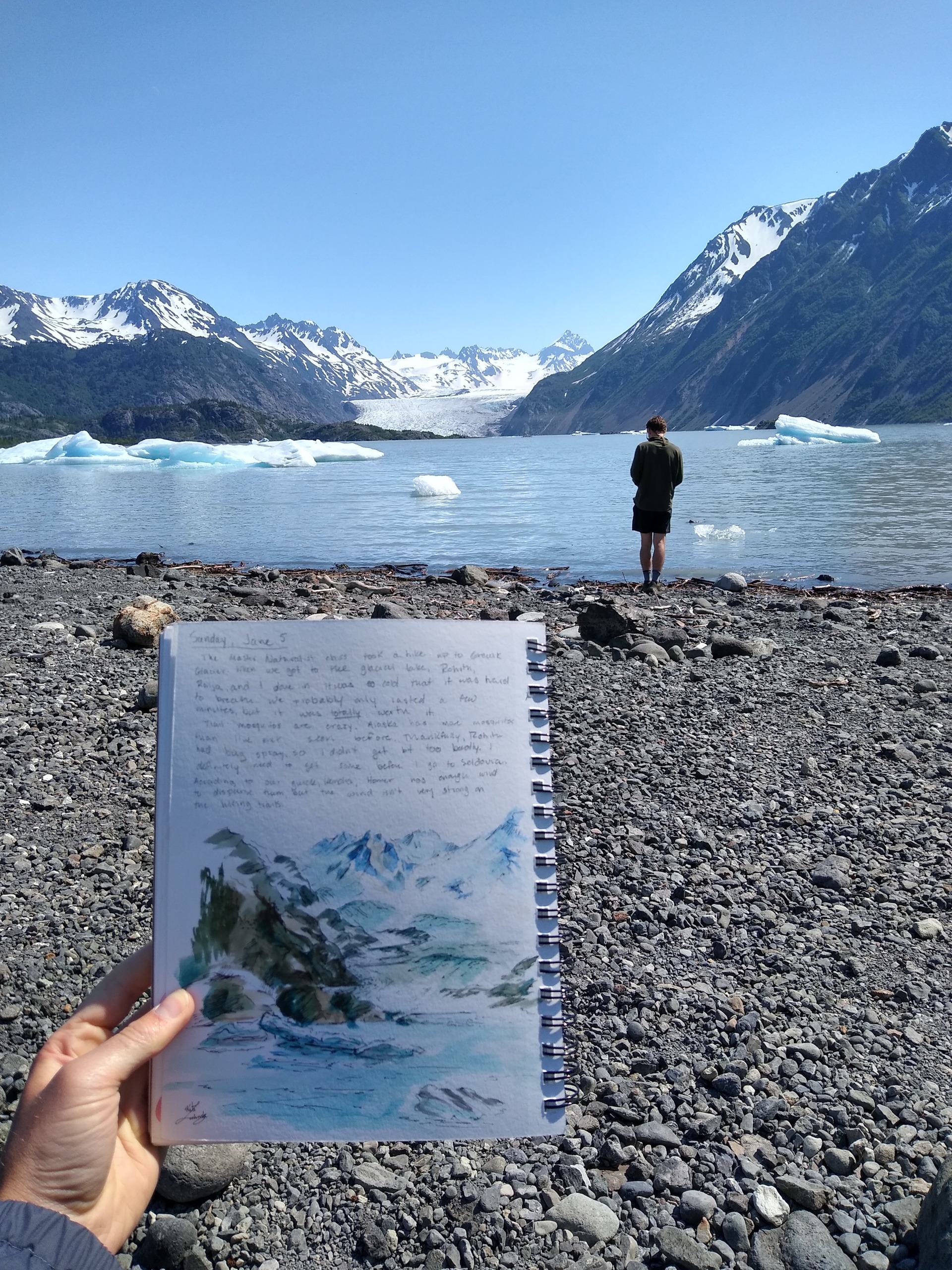 Kate Lochridge noted her surroundings and sketched a glacier near Homer, Alaska.

During the first few weeks of her internship, Lochridge sketched landscapes and noted how Alaskans interacted with their surroundings. She spent a lot of time exploring, including visiting a glacier near Homer, Alaska.

“I sat there for a few hours drawing the iceberg, the marks the glacier made as it was receding and all the sediment deposits,” Lochridge said. “I listened to the ice cracking and the different parts calving off and tried to incorporate those into a visual representation.”

As a part of her project, Lochridge also interviewed scientists, including some who have spent decades researching how glacial melt impacts animal and plant composition in Kachemak Bay. 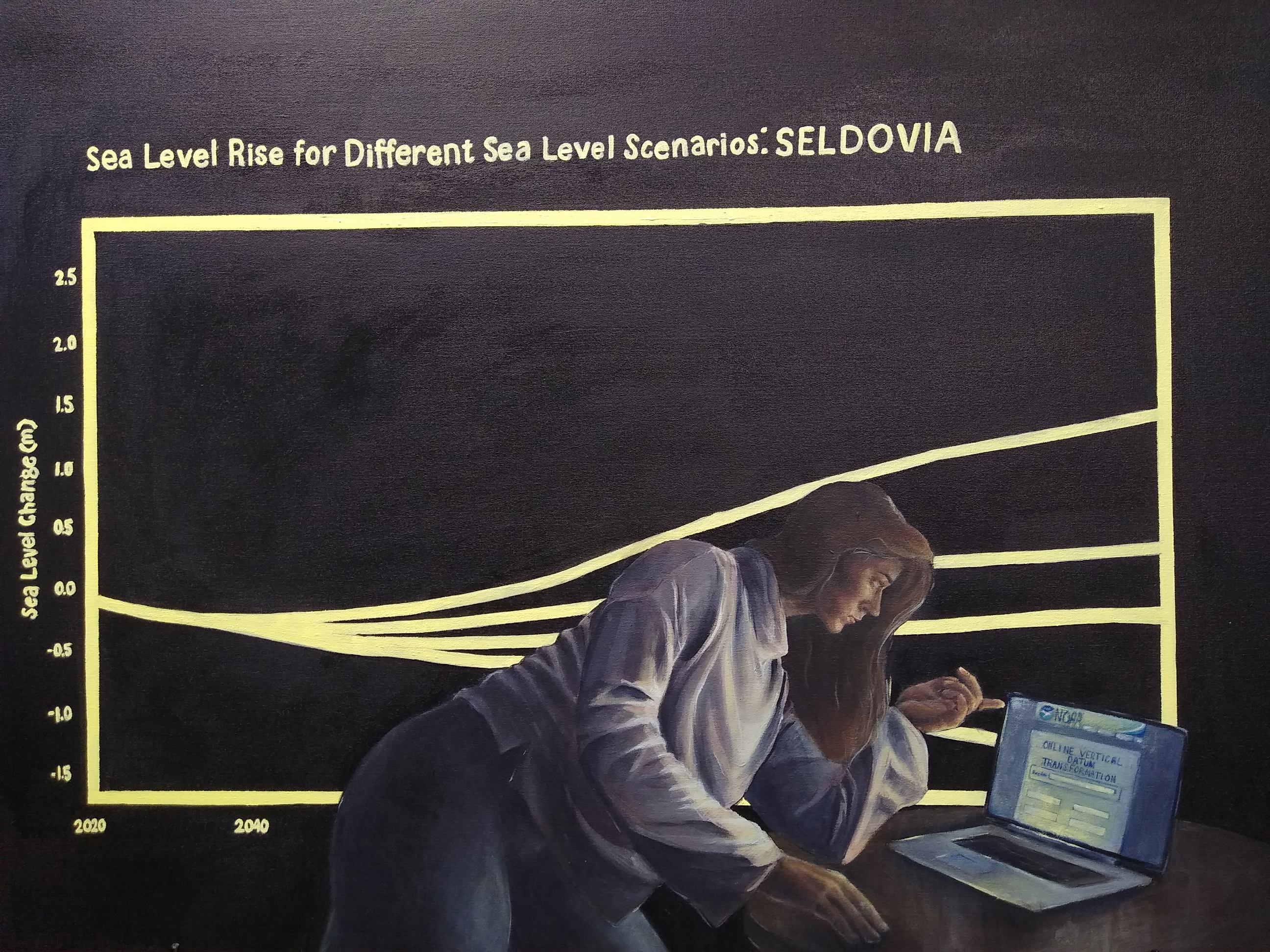 One of her pieces resembles a line chart to highlight the data collection and processing needed to provide sea level rise projections to the public. Lochridge said the land in Southcentral Alaska is rising faster than the ocean, decreasing sea levels in the region.

However, scientists predict the sea level will eventually surpass vertical land movement, which is critical information for regional planners and the community, she said. 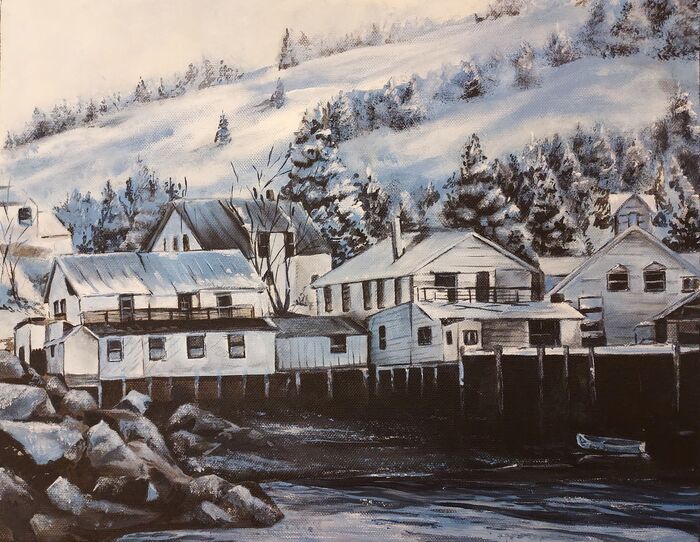 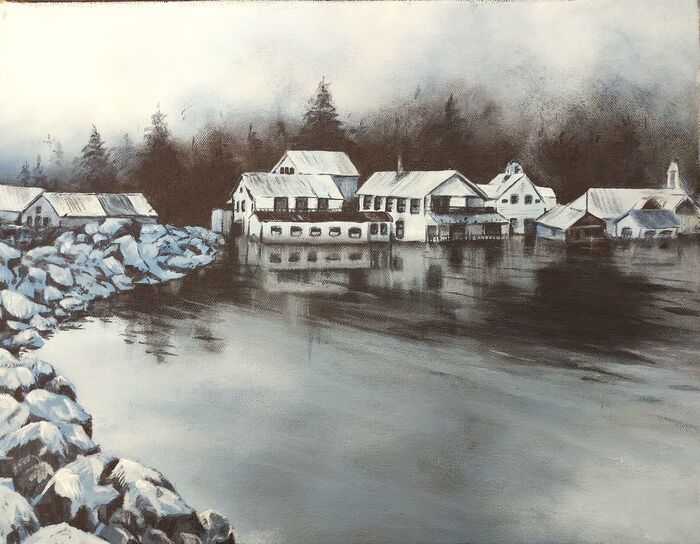 Two side-by-side paintings of the coastal town of Seldovia illustrate the landscape before and after a 9.2 magnitude earthquake in 1964. Through research, Lochridge learned the earthquake caused the land to subside four feet, which dropped the town below high tide, resulting in flooding.

Those pieces and several others were displayed during a free art show as a culmination of Lochridge's internship. Kinsman said the responses to the show validated to her the benefit art can offer the science community.

“It was incredible. You could feel the energy in the room,” Kinsman said. “People were really engaged, they were asking questions, and they were from all different parts of the local community.

“The sea level trends are confusing and difficult for the general public to wrap their heads around. Through this project, Kate truly showcased the value of fine arts in communicating science to the broader public.”

Lochridge presented her work at the American Geophysical Union conference in Chicago Dec. 12-16.