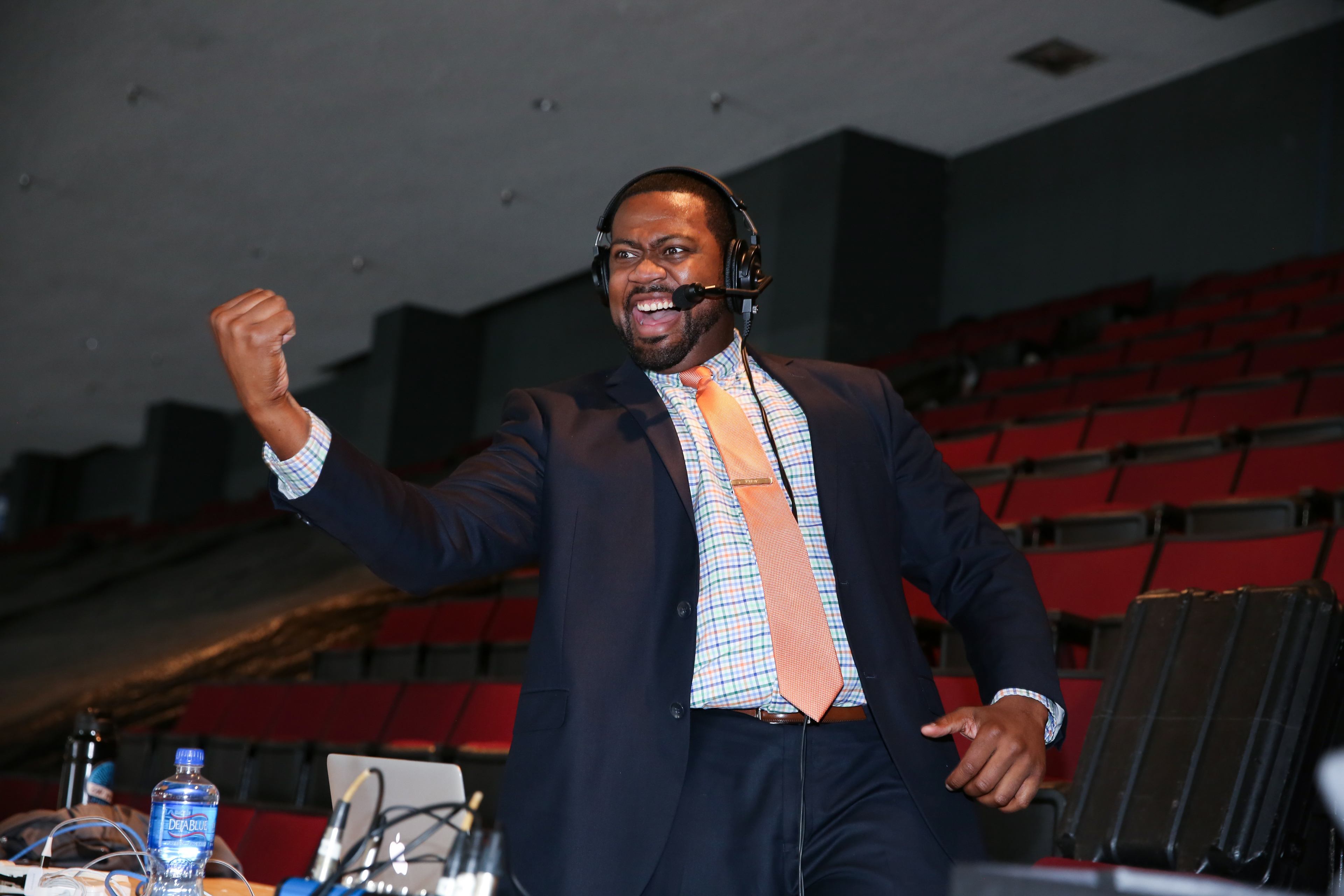 "You as Black kids, as historically underrepresented communities, belong within the game of hockey." @TheVoiceFitz and @JTBrown23 explain what it means for them to host the NHL's first all-Black TV broadcast tonight. pic.twitter.com/8yt28SNrGK

Congratulations to #BGSUAlum and pioneer, @TheVoiceFitz, the first Black announcer in the history of the @NHL! He is making history again with @JTBrown23, forming the first-ever all Black broadcast team in #NHL history. 👏 https://t.co/5x1FDIJ37b

For Bowling Green State University alumnus Everett Fitzhugh, this season has been nothing less than a dream.

The historical accolades that came with his job were an added bonus that he hopes will be part of continuing to grow hockey’s reach among underrepresented populations.

Fitzhugh ’11, who became the first Black announcer in NHL history when hired by the expansion Seattle Kraken as the club’s radio play-by-play broadcaster, recently made more league history when he became part of the first all-Black announcing team for the Kraken’s Feb. 17 game at Winnipeg.

While filling in for John Forslund on ROOT Sports’ Kraken television broadcast, Fitzhugh joined analyst and former player JT Brown to make NHL history, a night whose significance was not lost on the Detroit native who didn’t always see people who looked like him at the rink.

“You never expect the first of anything or set out to be the first of anything, but it has definitely been a cool experience,” Fitzhugh said. “It has been a little weird in that, as a PR guy, I’ve been mostly behind the scenes. I’m mostly the one doing the promoting, so it’s a little odd being the one who is being promoted like I’ve been, but I owe it to our culture, to our sport and to myself to be able to help lead that and show people there is a place for historically unrepresented populations within the game of hockey.”

It was a whirlwind few days, but Fitzhugh said he was blown away by the support he received dating all the way back to his days at Bowling Green.

“First and foremost, all the support from colleagues, friends and family was great,” he said. “Obviously without John Forslund giving his blessing, it wouldn’t have happened. I heard from a lot of people around the league, a lot of my old colleagues, a lot of my old friends from BG.

“It was really special just to hear from a lot of folks. That’s the one thing I’ve gotten in abundance since I took this job: People being so kind and warm and genuine with their support.”

Fitzhugh knew he wanted to work in sports for a career, and chose Bowling Green because it is one of the select few nationally that plays all four major sports at the Division I level.

While he was a student, Fitzhugh volunteered in the Athletics Department to help complete media guides, write releases and run news conferences, but from the first time he called a hockey game, he was hooked.

During his stops doing hockey play-by-play in Youngstown, Cinncinati and now Seattle, Fitzhugh said he has regularly used things he learned on the job as a BGSU student majoring in sports management and minoring in broadcast journalism.

“I tell folks this all the time, and it’s not just for a soundbite: Without Bowling Green, I’m not here, and I 1,000% believe that,” he said. “Bowling Green is the reason why I am where I am. It gave me that foundation and showed me that this is a career that is worth sacrificing for and is worth having.

“If you do it right, you’ll never work a day in your life, and I’ve never worked a day in my life, and it’s because of all the things I learned at Bowling Green.”

The experience of becoming part of the first all-Black broadcasting team was a special night, he said, because it helps show that sports – and hockey specifically – are for anyone.

Further, he said, there are more ways into to sports than just playing them, and part of his goal as the play-by-play announcer for an expansion team is to help grow the game for anyone who wants to experience what it’s like.

“To tell people and show people that there are so many more avenues than just playing that you go into to be involved in the game of hockey, that’s the big impact for me,” he said. “It’s about getting people involved in the game and trying to foster people's love of the game no matter what color, gender, sexual orientation. You are allowed to be true to yourself and still love this game.”