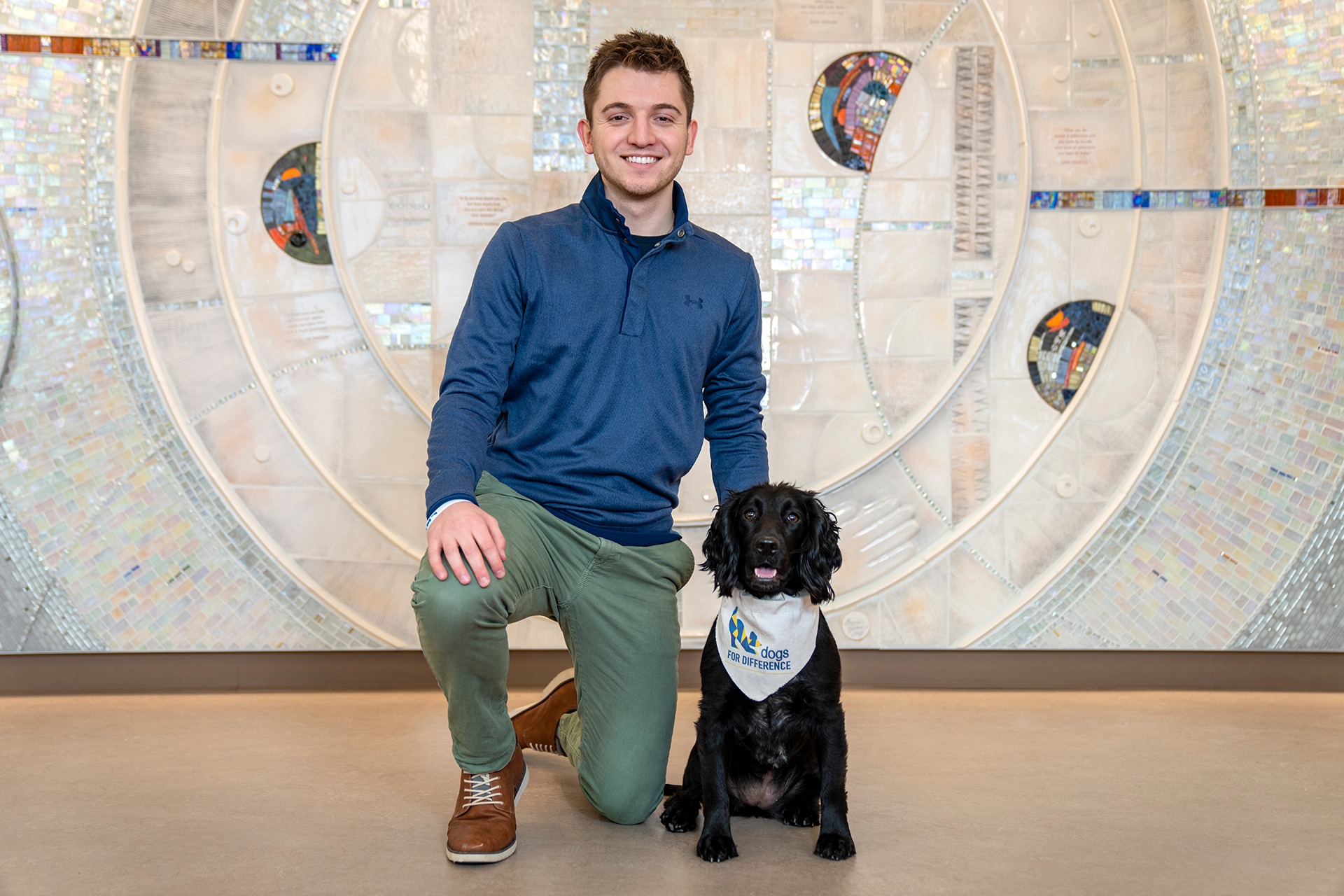 A simple idea for a fundraiser has turned into so much more for Bowling Green State University graduate student Aaron Witt.

When Witt was in high school, he was part of an organization that was brainstorming ideas for a reward during a school fundraiser. His family recently had adopted a puppy, so he proposed that the top-performing classes would win a dog visit.

The idea was a hit with both students and teachers. Now, it's the focus of Witt's successful non-profit, his academic research as a speech therapy master’s candidate in the BGSU Speech-Language Pathology program and the root of a $1,000 scholarship that he received from the Ohio School Speech Pathology Educational Audiology Coalition.

“From there, we saw the impact it had,” Witt said. “A lot of the other teachers were saying, ‘This would be great for my kids,’ and I’ve always been a huge dog person who has been around the speech and special education world, so it was really combining the two into a more structured idea.” 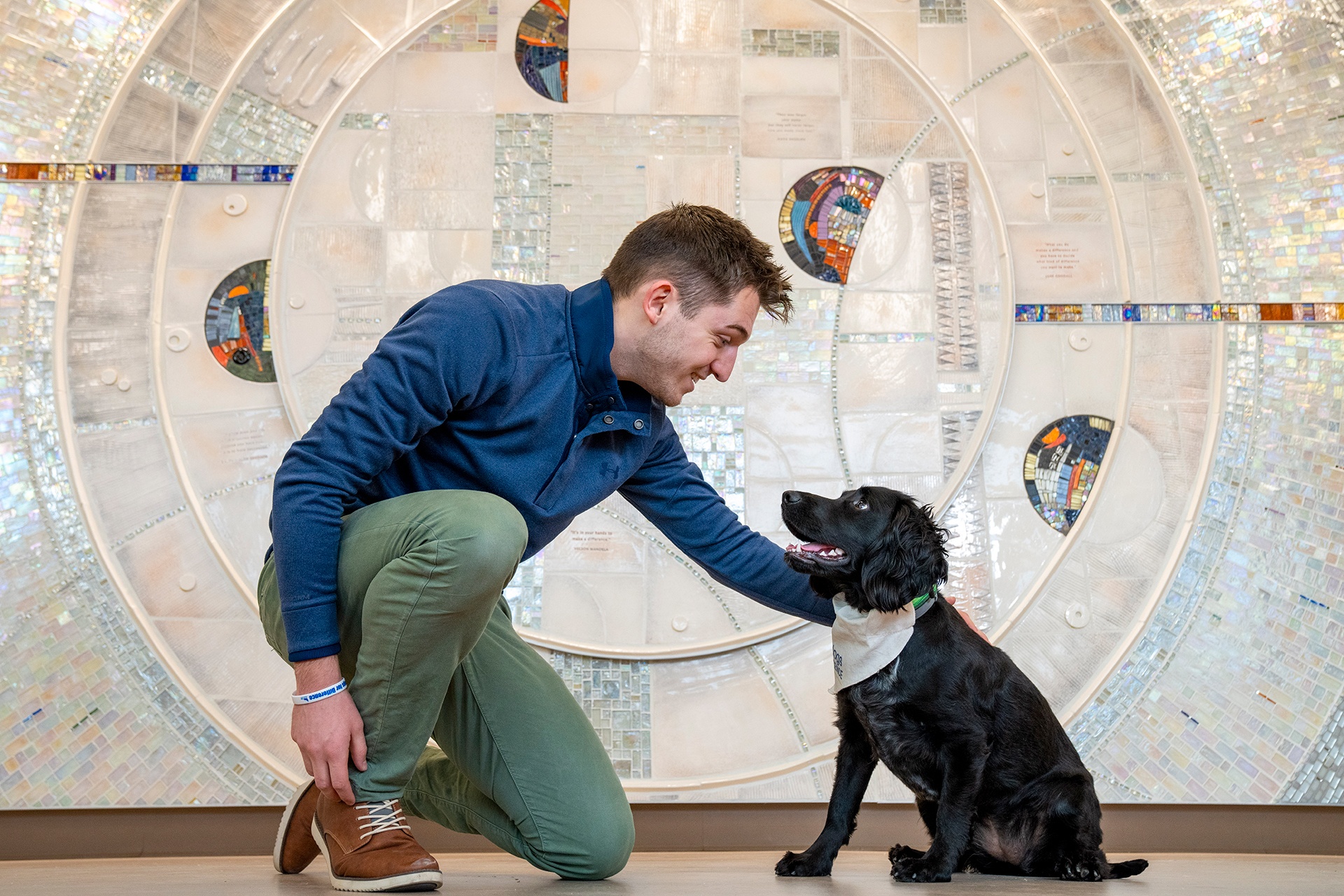 During his undergraduate studies, Witt began an organization called Dogs for Difference, which uses four-legged friends in a clinical setting with special education students. The organization, now a registered non-profit, continued into Witt’s time at BGSU, during which he has taken some of his anecdotal experience and turned it into quantifiable research.

Under the guidance of Dr. Tim Brackenbury, Witt turned the idea into a thesis titled, “Increasing Expressive Language of a Child with Autism Using Animal-Assisted Therapy,” a case study in which he measured speech during sessions with a student on the Autism spectrum in both the absence and presence of a dog.

Through his non-profit, Witt previously kept noticing that the presence of dogs really did make a difference for children, who almost always were excited to see the dog and earn rewards like giving treats or taking walks – inspiring Witt to apply the idea to speech therapy study.

“Through Dogs for Difference, I have really seen how dogs can impact kids in different ways, whether it’s emotional, social or mental,” Witt said. “It was anecdotal evidence, but you could see from week to week that these kids will talk more when there's a dog. I started thinking this would be a really good study and that it could give some factual evidence of what I was seeing, which was that the dogs could really impact the kids and help them talk more.”

Brackenbury said Witt came into the program with useful experience, but has shown an interest for widening his scope into research, allowing for more opportunities after graduation.

“There’s a lot you can do with this degree, so Aaron may stick with kids, but he may take animal-assisted therapy and try it with people who stutter or adults with other communication problems,” Brackenbury said. “Even though Aaron didn’t walk in with research expertise, he’s done a great job of learning, being open to learning and using what he’s learned in his research.”

Donna Colcord, the clinical director of the BGSU Communication Sciences and Disorders department, said Witt has shown the ability to work in a wide range of clinical settings.

“From the beginning, we identified Aaron as being someone who had experience working with people and exhibited the caring, attentive skills that are needed in our field,” Colcord said. “He has had numerous clinical assignments, so he’s worked with everyone from young pediatric clients to geriatrics.

“When he finishes his degree, he certainly can work as a speech language pathologist in any setting and with any age level, and he’ll do great. The background he has with using animal-assisted therapy when working with kids will allow him to be successful in any setting.”

Currently, Witt is working in a field placement with Maumee City Schools as part of his clinical experience at BGSU.

Though he is not totally set on what he will do after graduation, Witt said he likes the school setting, plans to continue the non-profit in some capacity and has been thankful for the experience he has had with the BGSU Speech-Language Pathology program.

“Everybody has been really encouraging, and Dr. Brackenbury has helped me figure it out from a speech therapy lens,” Witt said. “It’s been a really good experience because I’m really passionate about speech therapy and that part of my life, but the 501(c)(3) has been a big part of my life, too, so having support from both angles has been huge for me at BG.”