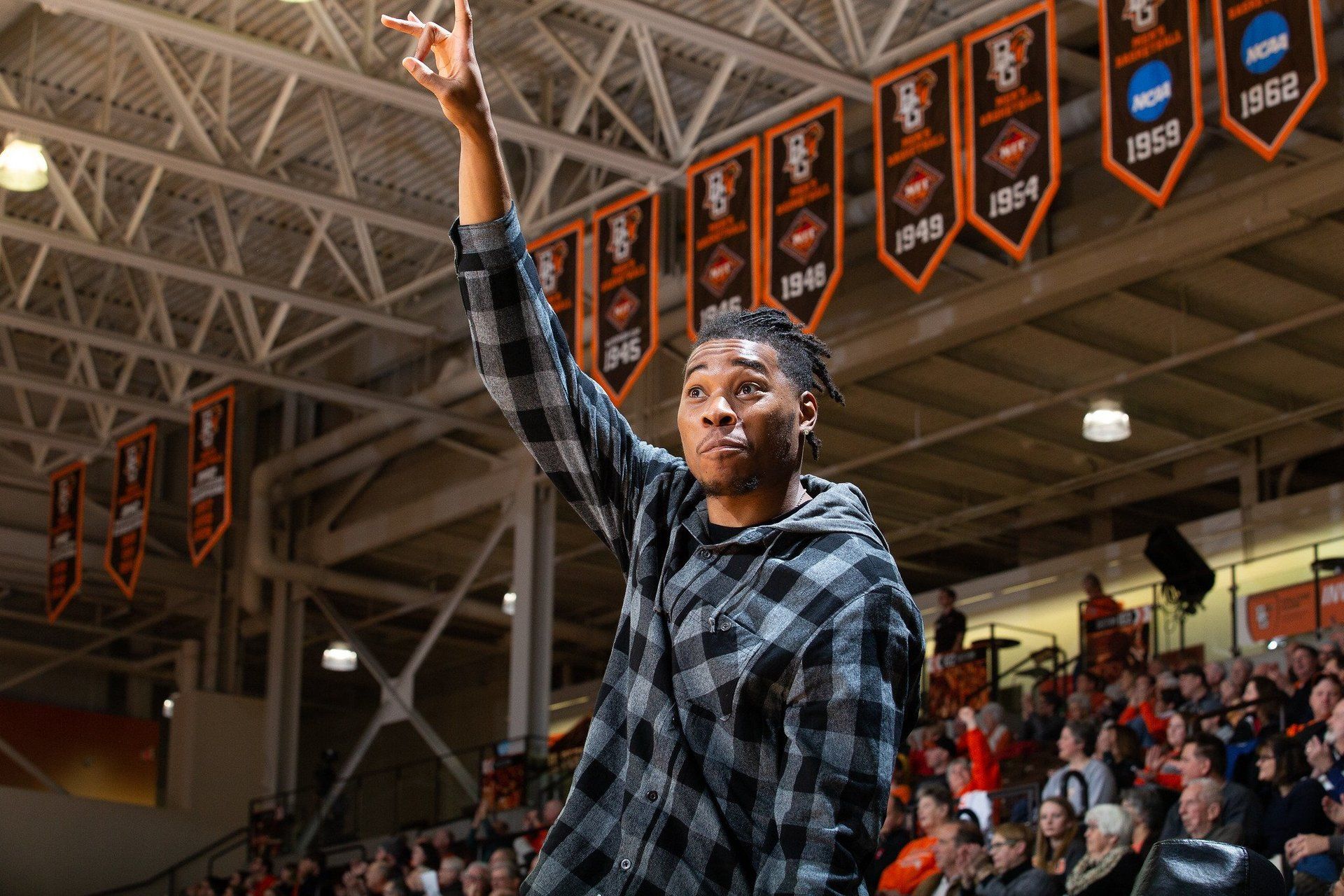 Richaun Holmes acknowledges the crowd at the Stroh Center on Jan. 21, 2020.

Richaun Holmes, a blossoming star in the NBA, attributes pro success to BGSU

Former Falcon in line for big payday in free agency 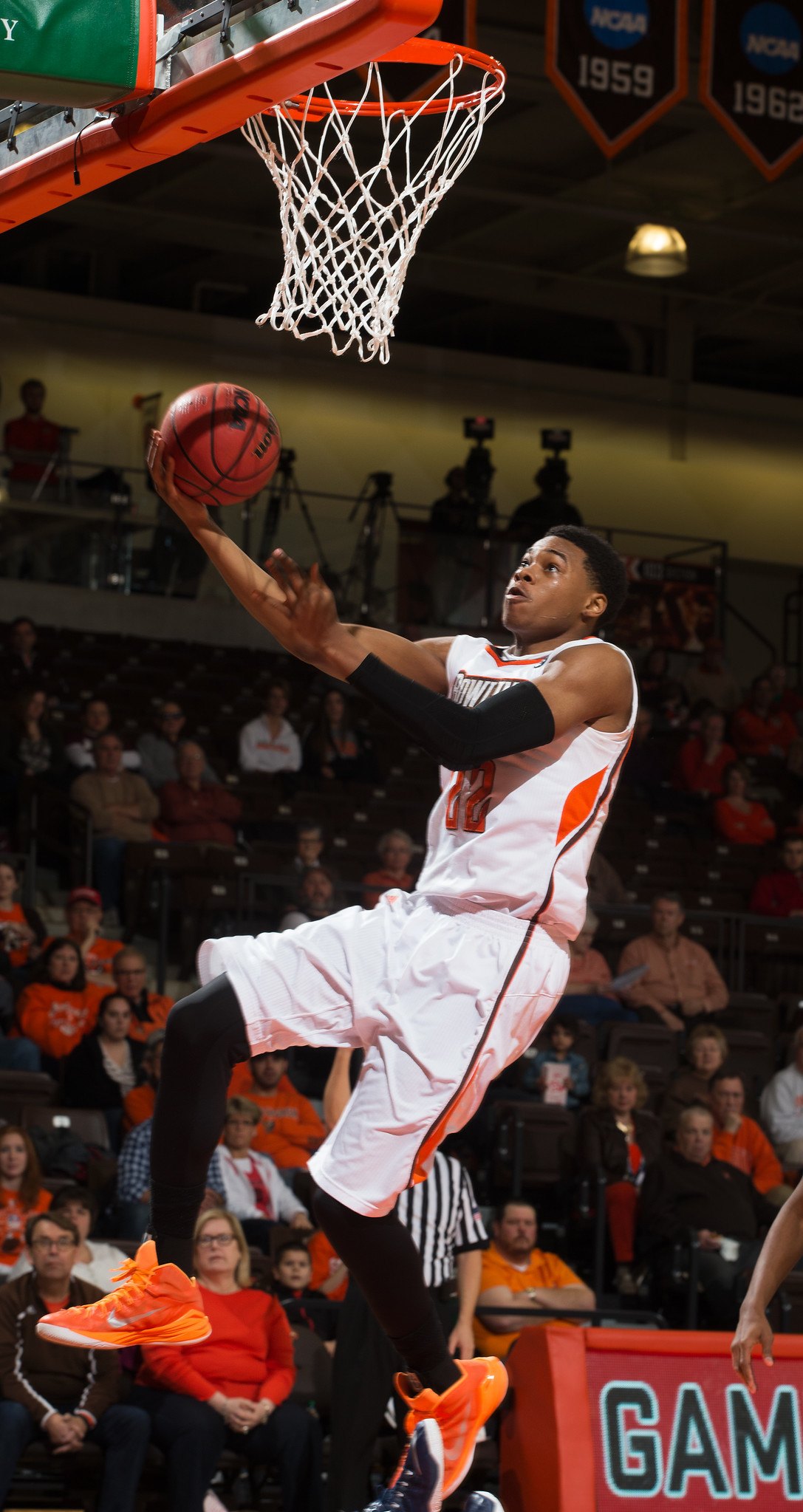 He attributes many of his achievements to the Falcon men’s basketball program and the Bowling Green community.

After not receiving any Division-IA offers out of high school until he shot up to 6-foot-10 from 6-2, he committed to play for Moraine Valley Community College near his hometown of Lockport, Illinois.

In his lone season in junior college, he averaged 19 points, nine rebounds and five blocks per game. He said that before he even started playing that season, former BGSU basketball coach Louis Orr already was actively recruiting him. This intense recruitment would ultimately be the reason that Holmes chose to attend BGSU at the conclusion of his junior college season.

“The main thing that made me commit was how aggressively Bowling Green wanted me,” said Holmes, who played for the Falcons from 2012-15. “Coach Orr came to all my scrimmages and games. I didn’t have that many offers in my first season at junior college. It meant a lot to me that they wanted me.”

As a BGSU senior in 2014-15, he was named the Defensive Player of the Year in the Mid-American Conference (MAC). Holmes averaged 14.7 points and 8.0 rebounds en route to earning first-team, All-Mac honors.

He is the only player in the history of the BGSU men's basketball program to post 1,000 career points, 600 career rebounds and 200 career blocks. Holmes is BGSU's all-time career blocks leader (244), and holds the BGSU single-season, blocks record with 88 in 2013-14.

Holmes enjoyed his time at Bowling Green. Some of his favorite things about the town was getting stuffed bread sticks at Campus Pollyeyes and hanging out with his teammates at other local spots. He also loved the basketball program, crediting the Falcons for his professional.

“Just being a part of the core of the community and the support the alumni give you is what made it great,” Holmes said. “They just show you great amounts of love and I enjoyed having that kind of support system.

"Coach Orr looked out for me, making sure I became a good man, and the program pushed me to my physical limits during my last year.”

“I was actually drafted during a commercial, I did not realize that I even got drafted until I got a call from a friend.” Holmes said. “Everyone was screaming and going crazy after I told them; it was the day best of my life.”

"Just being a part of the core of the community and the support the alumni give you is what made it great," Holmes said. "They just show you great amounts of love and I enjoyed having that kind of support system."

All of his hard work had paid off.

Holmes started in a minimal role for the 76ers as a second-round draft pick, averaging 5.6 points and nearly three rebounds while playing around 13 minutes per game during his rookie season, 2015-16.

His second season had its ups and down. He was sent to the NBA’s developmental league three times during the early portion of the season, and it wasn’t until the 76ers traded center Nerlens Noel that Holmes would become a part of the regular rotation. He played well, boosting his averages to 9.8 points and 5.4 rebounds while playing 21 minutes per game.

He described the jump from college basketball to the NBA as tough, mainly because of the number of games played in a season.

“The most games I played in a college season was 35, which isn’t even half of an entire NBA season,” Holmes said. “Learning how to take care of my body was key to preparing myself to play all those games.”

Every NBA rookie seems to have a “welcome to the NBA” moment. Holmes’ moment came during his time with the 76ers. He was assigned to guard NBA center Enes Kanter and was scored on five times in a row.

“I could not stop him; I don’t think I played in the next three games after that happened,” Holmes said.

Holmes has improved his game nearly every year that he has been in the NBA, saying that he spends countless hours in the gym working on his game. After he signed a two-year, $10 million contract with the Sacramento Kings in 2019, he improved his numbers to a career high 14.2 points per game this past season. He also averaged a career high in rebounds (8.3), assists (1.7) and blocks (1.6).

There was no offseason for him this year, as he has dedicated himself to improving in all areas as a player. He enlisted help from old coaches who had helped train him. He feels prepared for the upcoming season and everything that comes with it.

Holmes’ contract with the Kings ended after the season. He is a free agent for the first time in his career and is seeking a four-year deal worth $80 million, according to a published report. He said he is just going to sit back and see what happens, whether it is re-signing with the Kings or joining a new team via free agency.

There’s one thing he knows for sure.

“I wouldn’t be in this position if not for my time in Bowling Green,” Holmes said, “and playing for the Falcons.”