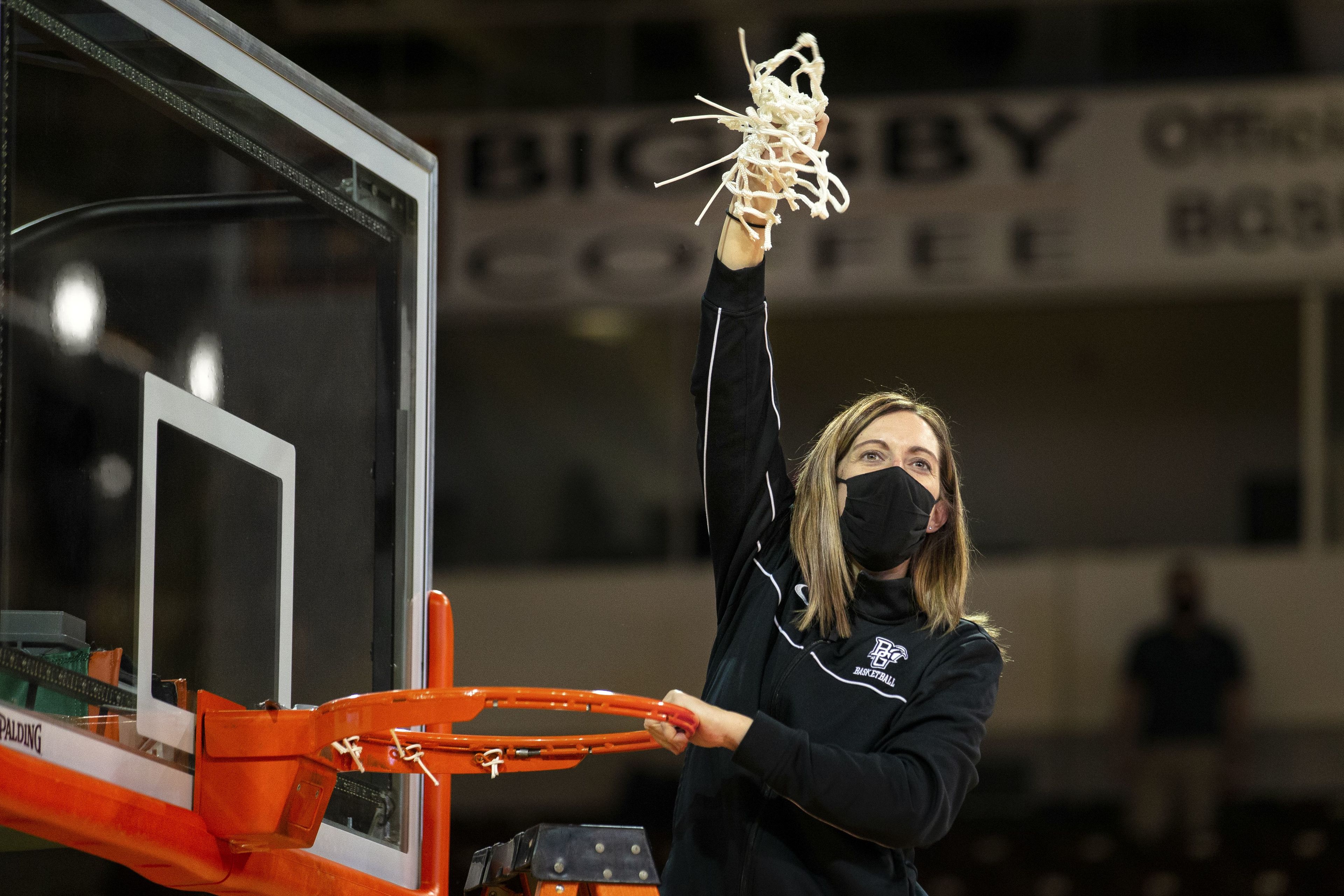 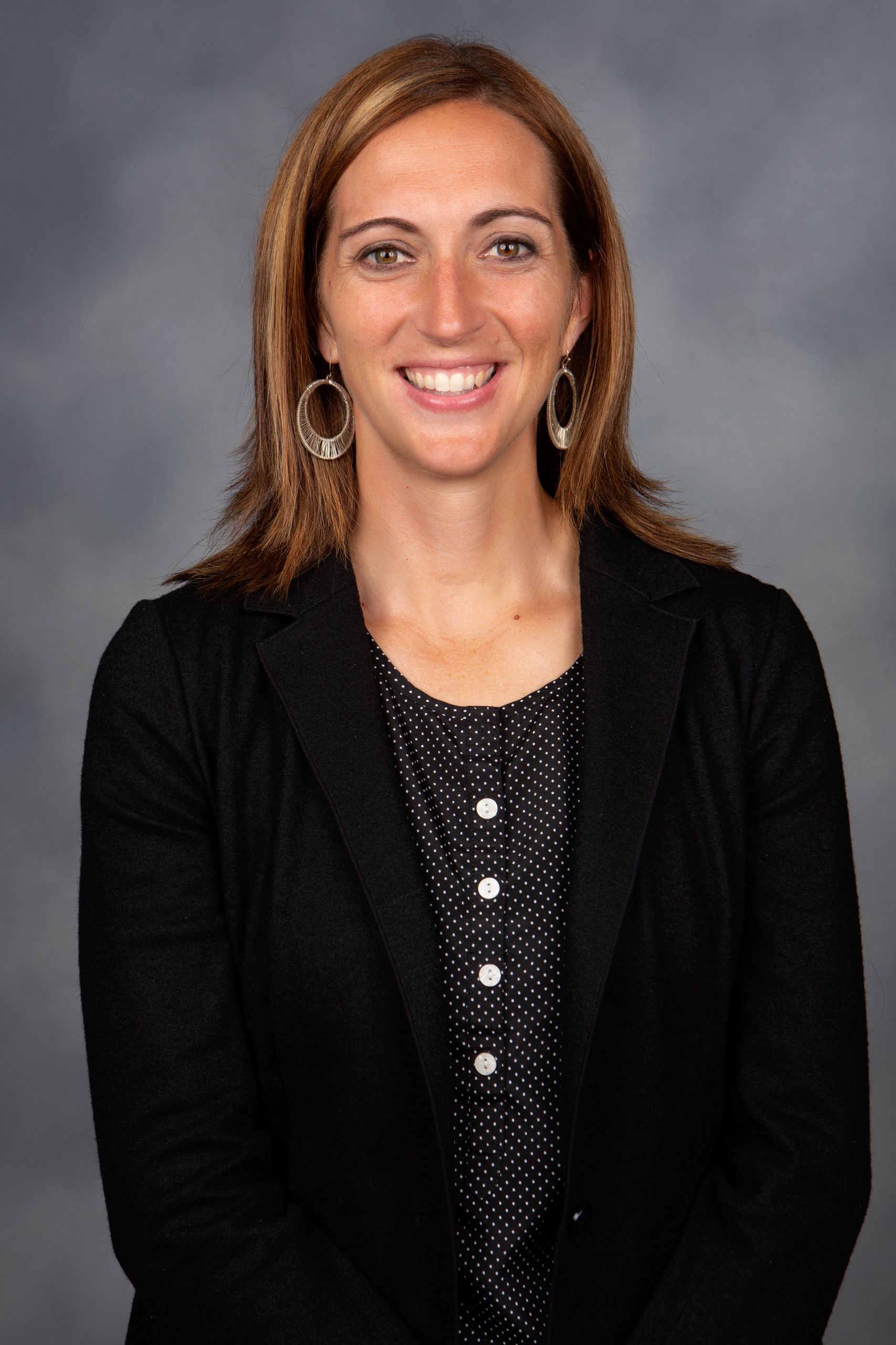 The core values are as follows: 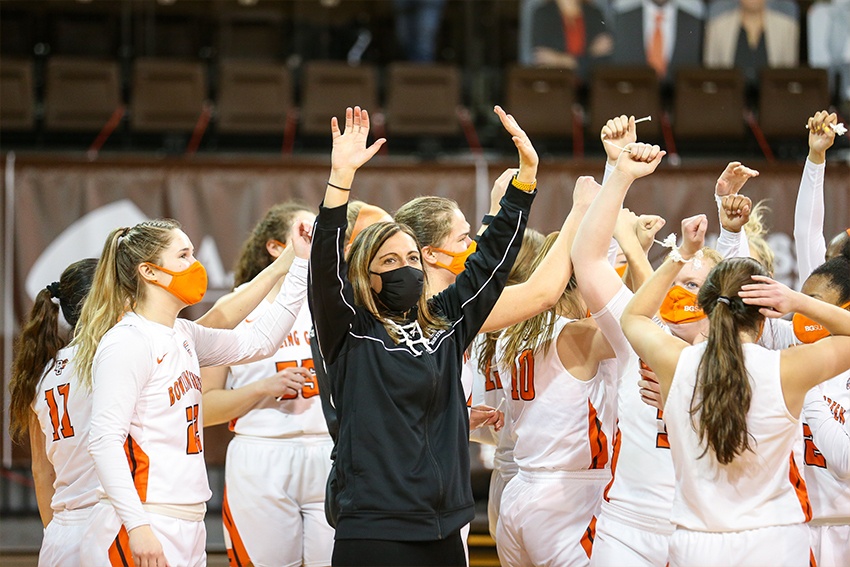 It’s easy to say that everything finally clicked for Coach Robyn Fralick and the Bowling Green State University women’s basketball team during the 2020-21 season.

After all, the Falcons had a 21-8 record, an 11-game improvement from the previous season, and were the Mid-American (MAC) regular season champions. Their success this past season would have seemed improbable after two seasons with a combined record of 19-42 and playing all of this past season’s games during a global pandemic.

That, however, isn’t the case, according to the team’s determined coach. For this season to have turned out like it did, that fundamental change started on Day 1 of the arrival of Fralick and her coaching staff in 2018.

“From the minute we got here, our process has remained consistent,” she said. “We were very culture driven. We talk about our core values every day. And I love to say culture isn’t built in a day — it’s built every day. Radical change is pretty uncommon because you're just limited by the minutes of a day. So, this change, in my opinion, has been happening every day since we got here.

“This season just had some real magic to it. This pandemic has been really tough on everyone across the world for a lot of reasons and especially student athletes this season. We just had this really cool combination of eager, enthusiastic and competitive young kids mixed with some upperclassmen who really play with a purpose and really believe in our program.”

Putting the past in the past

The Falcons, while starting three freshmen including MAC Freshman of the Year Lexi Fleming, got off to a fast start, reeling off 12 wins by Jan. 30 and set the stage for winning the conference.
“I think our staff and team did a really good job through COVID of being adaptable and staying in great communication. In some ways, that brought us closer together,” Fralick said, “because with COVID there are so many restrictions of who you can see and what you can do."

“We had our team in that space created by COVID and it became even more valuable because it was a space where things could feel normal because of basketball.”

“We had our team in that space created by COVID and it became even more valuable because it was a space where things could feel normal because of basketball.”

They swept their two-game series with their rival, the University of Toledo, and finished the regular season with an 18-5 record, winning the conference title and earning the top seed for the MAC Tournament.

“This great combination came together of experience and maturity in our program,” Fralick said. “I actually was enjoying it while it was happening. And, you know, in coaching, I can get lost during a season of enjoying it while it's happening because you're always ready preparing for the next thing. But this group, every day working with them was great. We really just had a very cohesive, hardworking team that continued every day to elevate the expectations of the program.”

The Falcons were picked to finish next to last in the 2020-21 MAC preseason poll. After they compiled a 14-4 conference record and earned the No. 1 seed in the MAC Tournament, Fralick was named the MAC Coach of the Year.

She credited her team’s excellent play and talented coaching staff in receiving the personal accolade.

“Any time those sorts of things happen, when you're involved in team sports, any sort of individual recognition, in my opinion, is always a reflection of the team's success and teamwork,” Fralick said. “All of those things have been a reflection of the hard work and the togetherness of our team and of my staff. I feel really fortunate that I have an incredible staff that is all in and they wholeheartedly love our players. I think just all of those factors coming together were the reasons we were successful.”

The University announced a three-year contract extension for Fralick on March 16. Her contract now runs through the 2026-27 season.

"Robyn Fralick has built a tremendous team culture within the BGSU women's basketball program," said Bob Moosbrugger, BGSU director of athletics, recreation and wellness. "She and her staff have elevated our program to a championship level in just three short years with the added challenge of a pandemic. The student-athlete experience in our women's basketball program is first class, and we look forward to continued growth under Coach Fralick's leadership for years to come."

Fralick hopes to reward the fans’ support when things might return closer to normal next season.

“We love our fans,” she said. “I think something that makes our program so special is the support for women's basketball that has stayed steady through the good years and through the tough years. We feel so fortunate to be able to play at the Stroh Center. We feel like where we get to play is just spectacular and our fans' support is spectacular too. We'll be excited to hopefully have them back next season.”

With Fralick’s guidance, BGSU has continued to perform well in the classroom too. In August 2020, the Falcons were ranked sixth in the country in the 2019-20 Women's Basketball Coaches Association (WBCA) Academic Top 25 Team Honor Roll.

“I think the great thing about the game of basketball is that if you use it the right way, if you see it the right way, it's transformative,” she said. “And that's just not only how you transform as a player, but how it can transform your life. In our program, that's something we're always in pursuit of, is seeing our kids transform both on and off the court.”

‘Always been drawn’ to the game of basketball

When Fralick finished her playing career at Davidson College in 2004, she wasn’t sure what her next step in her career would be.

“What I did know was that I absolutely loved the game of basketball, and I always had since I was little,” she said. “I have always been drawn to it, captivated by it and so I found my way back to it as a coach.”

She said she feels the same competitive fire on the sidelines as she did when she played at Okemos (Michigan) High School and Davidson.

“Coaching definitely fills the competitive side of you that maybe you don’t realize is such a part of you when you're growing up playing sports all the time,” Fralick said. “You still get that in the coaching world and it's really great that we still have that avenue of competition.”

After being an assistant coach at Ashland University from 2008-2015, she was the head coach from 2015-2018. During that time, the Eagles had a combined record of 104-3 and won a national championship.

Her goal since being hired at BGSU has been to continue on a similar path of success.