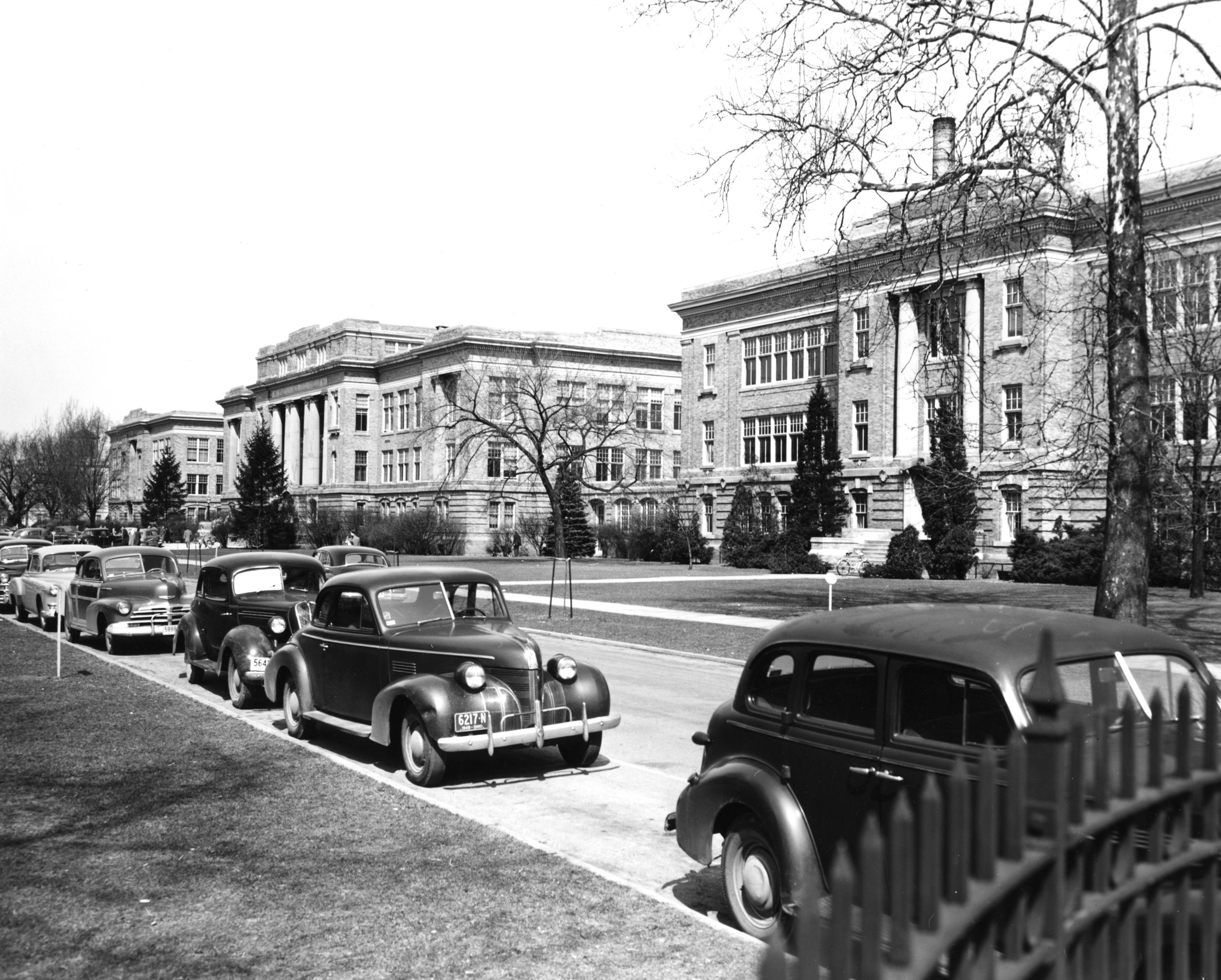 A look back at the history of Hanna Hall

Bowling Green State University’s Hanna Hall and the new Maurer Center are steeped in a tradition of providing students real-world experiences, then and now.

With the University’s deep roots in preparing students to become teachers, some of the early cohorts of education students observed classes and did student teaching in the building first known as the Elementary School Building and later Hanna Hall.

The building was planned in 1916, when administrators determined that a building dedicated to teacher education was essential to creating a top-quality education for future teachers. Material shortages in the aftermath of World War I and bankruptcy of the contractor delayed the opening until 1921.

The original intent for the building was to serve as an elementary school where students could hone their skills while working in an actual classroom. During those early years, the ability to observe and practice working with children was vital to the curriculum. Instead of student teaching at the end of a four-year curriculum, as education students currently do, first-year students observed and second year students were student teachers, allowing them to enter full-time teaching after their sophomore years or complete two additional years for their liberal arts education.

The elementary school program was set up for children in first through sixth grades from the city of Bowling Green. A kindergarten classroom was added in 1922. The best teachers that could be found were recruited as critic teachers for the training school. They held demonstrations on Tuesdays and Thursdays to augment material taught in professional courses, particularly educational psychology and principles of teaching.

During the 1940s and early ’50s, the building also became a gathering place for countless student organizations. From spring formals and socials for organizations such as the Newman Club and Delta Epsilon to meeting spaces for such groups as the Promenaders Square Dance Club, the Psychology Club and the Off-Campus Club.

BGSU and the Bowling Green City Schools decided in 1952 that the building had become inadequate to provide the necessary number of observations and student teaching opportunities. A contract was approved that allowed the Bowling Green City Schools to serve as the laboratory school system for University students. The change allowed teachers in the city schools to provide classroom instruction for pupils in the schools and also to serve as critic teachers for University students observing and student teaching in their classrooms.

By 1958, the Elementary School Building was no longer needed as a teaching school, and the College of Education disbanded the elementary school model. Within the next year, the building was renovated to house university classrooms, offices and a large, ramped lecture hall.

At the same time as the building was being remodeled, the board of trustees agreed to rename the building. According to an article in the November 1959 issue of the BGSU Alumni Magazine, the board met Sept. 11, 1959, and renamed the Elementary School Building. They chose to honor Myrna Reese Hanna, the first woman from Wood County to serve as state representative in the Ohio General Assembly. At the time, the board decided that rather than designate the buildings by their functions it would be suitable to honor outstanding Ohioans who contributed to the development of northwest Ohio or the University.

The woman, the legislator

The work of Myrna Reese Hanna, the first woman from Wood County to be elected to the Ohio General Assembly, forever changed the course of education at Bowling Green.

Hanna joined Sen. Van Everett D. Emmons as a sponsor of the state legislation that moved Bowling Green’s (and Kent’s) status as a normal school for teacher education to a college with a liberal arts curriculum. The bill gave BG and Kent the authority to grant bachelor’s degrees. The bill passed 104 to 7. She and Emmons were called “tireless workers” on behalf of the bill, according to a 1929 Sentinel-Tribune news article.

Hanna served in the 88th and 89th sessions of the legislature from 1929 to 1932. She wasn’t the first woman in Ohio to be elected to the state legislature, but she was the first in Wood County. She was widely known to the Wood County Republicans for her involvement in the party since women won the right of suffrage in 1920. A 1928 news article described her as “keenly alive to the problems of the day” with “an engaging personality.”

She believed in public service and good government and promoted laws that were the best for the people in Wood County and across the state.

During her two terms in office, Hanna advocated not only for the university but also for Fort Meigs, a park system along the Maumee River, the state’s roadways and protecting the rights of rural counties like Wood. She helped secure funds to complete work needed to free the village of Grand Rapids of flood peril by extending fill to replace the break in the guard bank below the Grand Rapids dam.

She also was interested in legislation protecting women and children. One bill she introduced

provided state support of annual exhibits of junior club work (4-H, FFA, scouts) in counties where there was no county fair.

When she was running for re-election in 1930, a Sentinel Tribune column stated:

“She is the kind of a woman who does things. She has demonstrated by her dealings in the General Assembly that she stands for the general upbuilding of the whole state and especially Wood County. Those matters which are for her to decide and interview, she does so only after deep consideration and with the needs of her home county at heart.”

The Pennsylvania native attended Oberlin College for a year before she moved to Wood County to teach at Liberty Township Schools. She met her husband Martin Hanna and assisted him for 20 years at a Rudolph general store before they moved to Bowling Green with their only child, Lester Martin Hanna, who grew up to be a prominent Bowling Green attorney.

She died Feb. 1, 1955, four years before BGSU voted to name the Elementary School Building in her honor. Her son, Martin Hanna, and her grandchildren helped unveil the portrait of Myrna Reese Hanna during the building’s official dedication in June 1960.

Grandson Drew Hanna, who continues the Hanna and Hanna law practice in Bowling Green, remembered his grandmother as “a talkative, extremely affable woman who was a born organizer and leader. She was very active in civic causes. She’d get an idea about something that needed to be done, organize the backers and get the job done.”

Beyond the education curriculum

Various departments, beyond the College of Education and Human Development, resided in Hanna Hall over the years, including geology, a curriculum laboratory, counseling and reading centers, the instructional aids laboratory, the BG News and Key yearbook offices, the Women’s Center and the Dorothy and Lillian Gish Film Theater.

The film theater, the labor of love of Dr. Ralph Haven Wolfe, was officially named by the board of trustees in April 1976 and dedicated in June of that year. The theater space was renovated and expanded in the late 1980s and 1990s, to include new padded seats, a large screen video projector, and space dedicated for the display of the Gish sisters’ and film memorabilia. In 2010, the Ralph H. Wolfe Viewing Center was opened.

Preparing for the new College of Business

Talk of a major renovation to Hanna Hall started in about 2016, when the University planned to relocate the College of Business to the space. A Dec. 6, 2016 BG News article reported plans for Hanna Hall were “to design the building to support the curriculum that is truly designed for collaboration,” state-of-the-art instruction and learning.

A $5 million leadership gift from Robert ’65 and Patricia Maurer of Bowling Green was announced in 2017 to move the college to Hanna Hall and add the Maurer name to the building. The Board of Trustees approved funds in October 2017 to move ahead with the architecture/engineering and preconstruction advisor services.

In February 2018, the board approved $28.5 million of future long-term debt and $16 million from private donor support to continue work on the building, including renovation of Hanna Hall and a significant expansion of the building footprint.

Work was completed and prior to the start of the 2020-21 academic year, the University announced the $15 million transformational gift of Allen W. and Carol M. Schmidthorst to name the college. When classes started on Aug. 26, 2020, the college officially was housed in the building. A formal dedication will be held Sept. 11, 2020.

The Elementary School was the backdrop for a group photo in the 1920s.

In the early years, cars could park on the street in front of the Traditions Buildings. 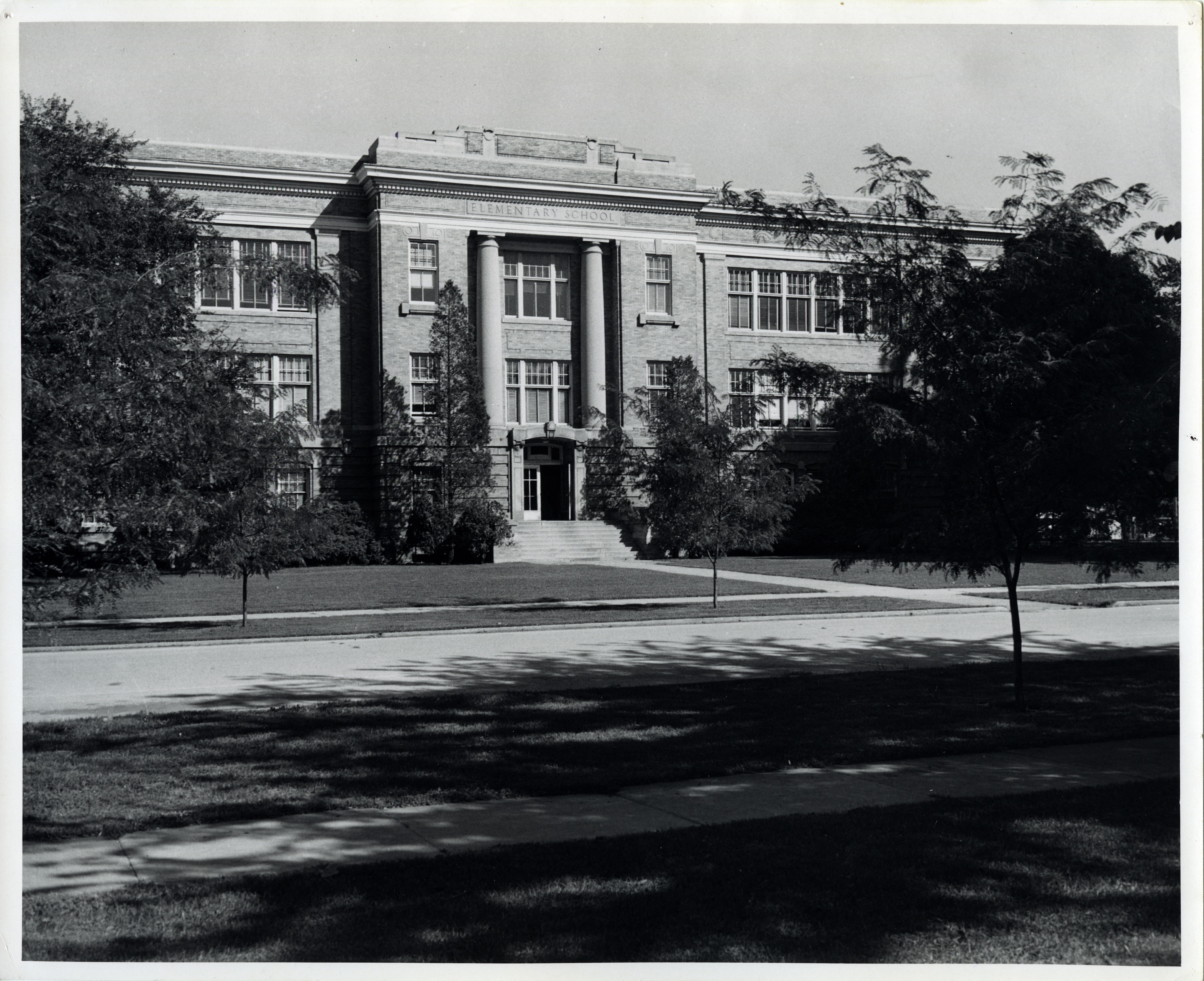 Iconic campus photo of the Elementary School along the once tree-lined street. 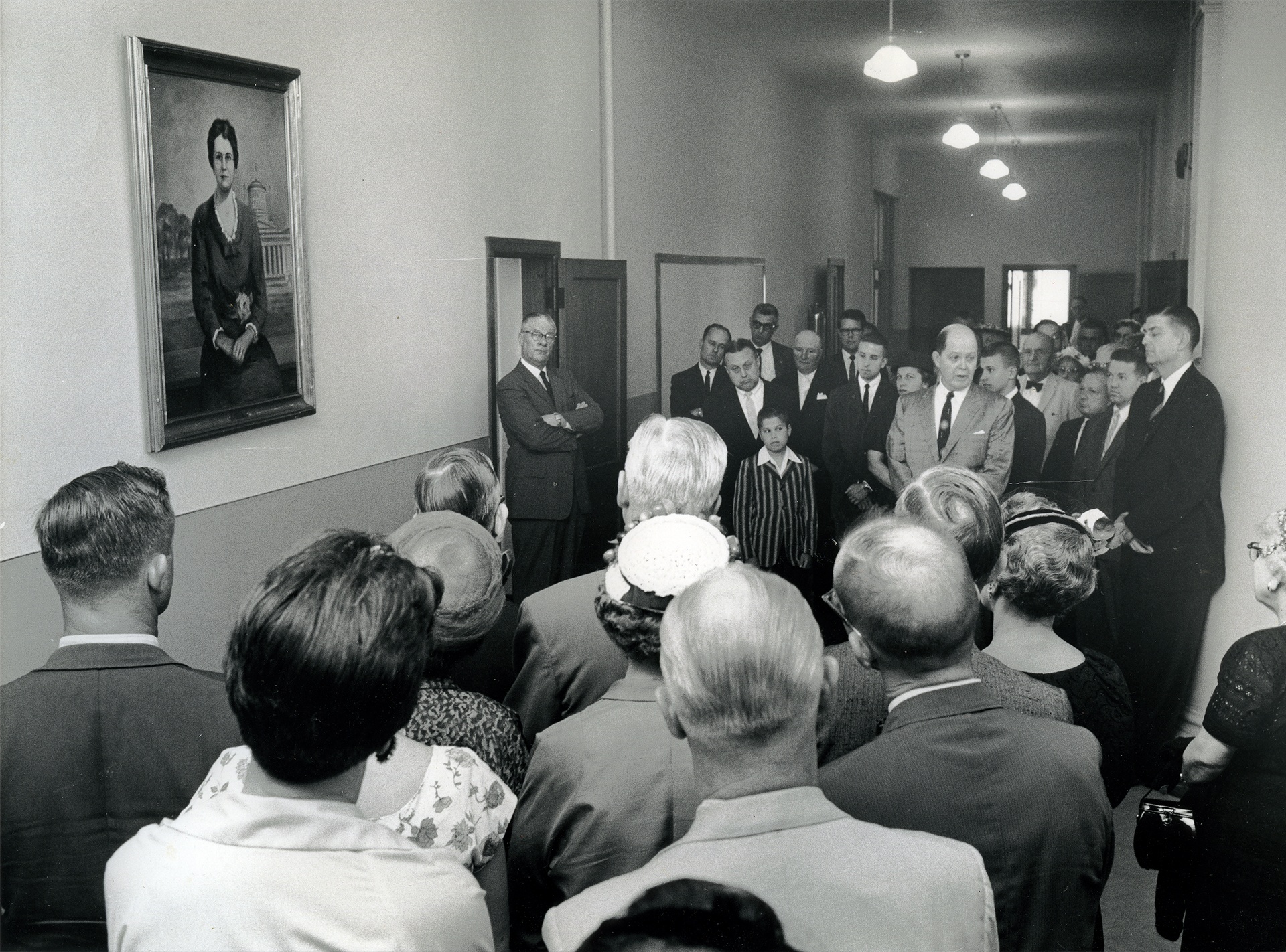 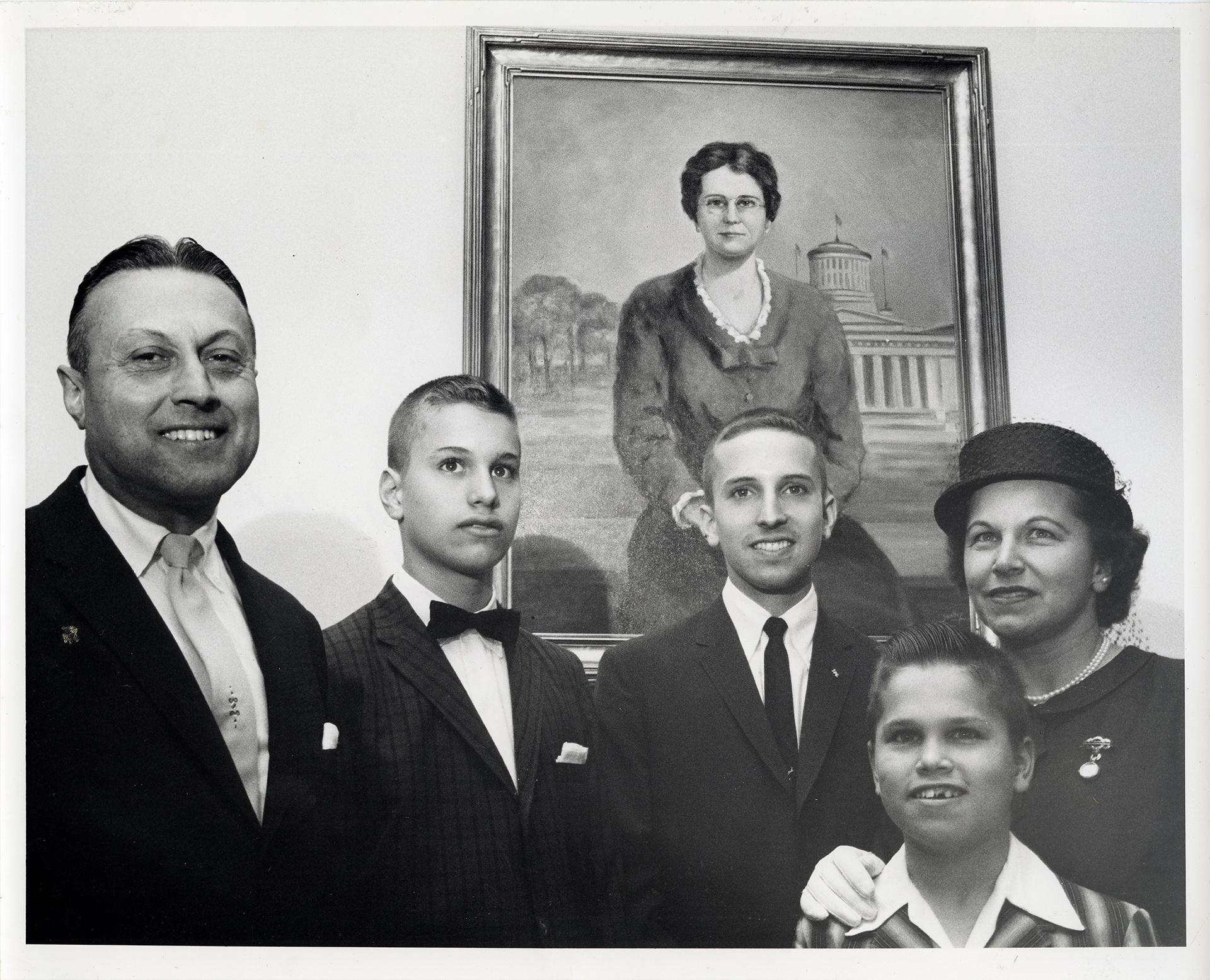 Martin Hanna, son of Myrna Reese Hanna, stands with his family in front of her portrait in June 1960. 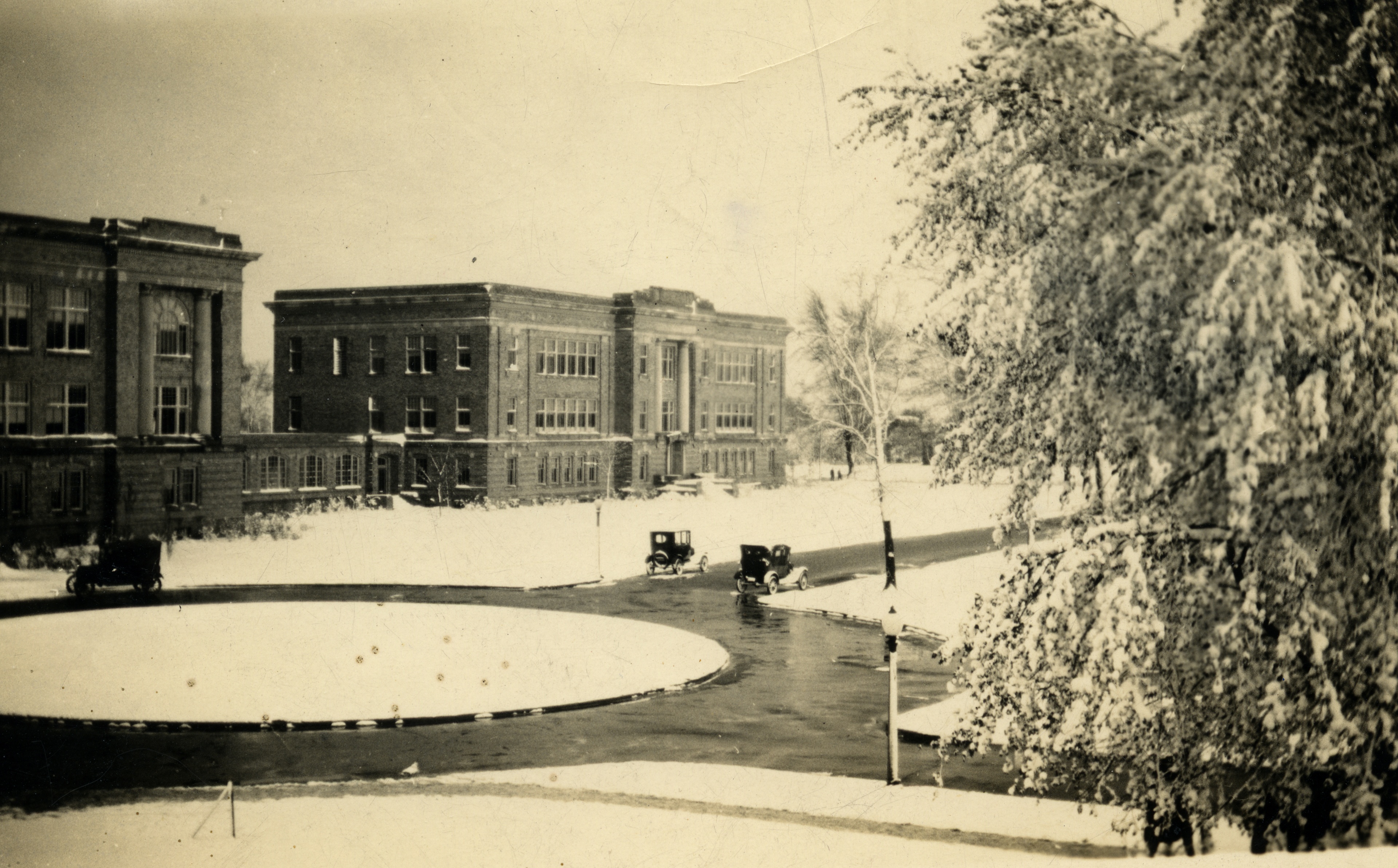 Snowy winters have been a long-time staple of a BGSU experience. 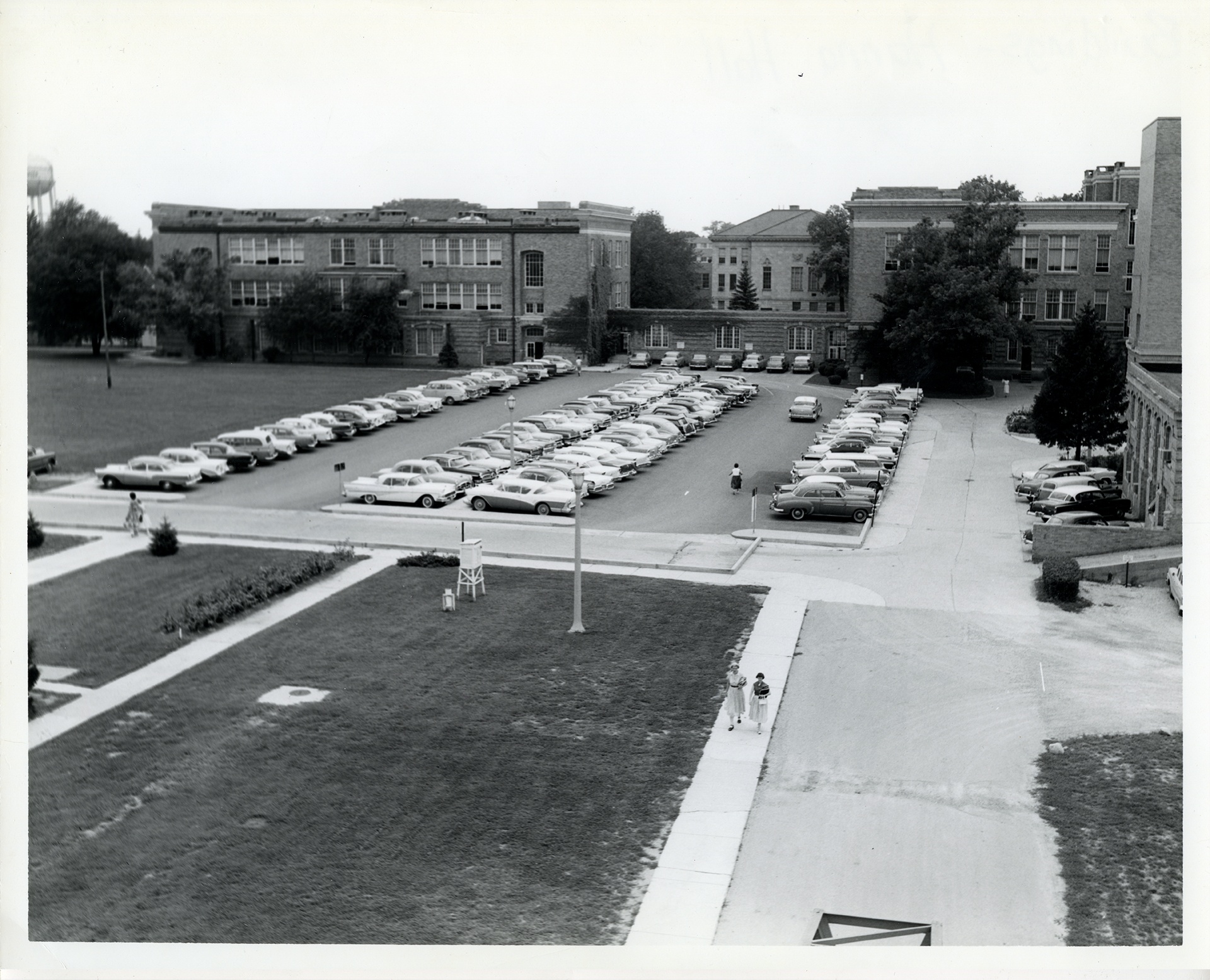 A view from the parking lot on the back (east side) of Hanna Hall. 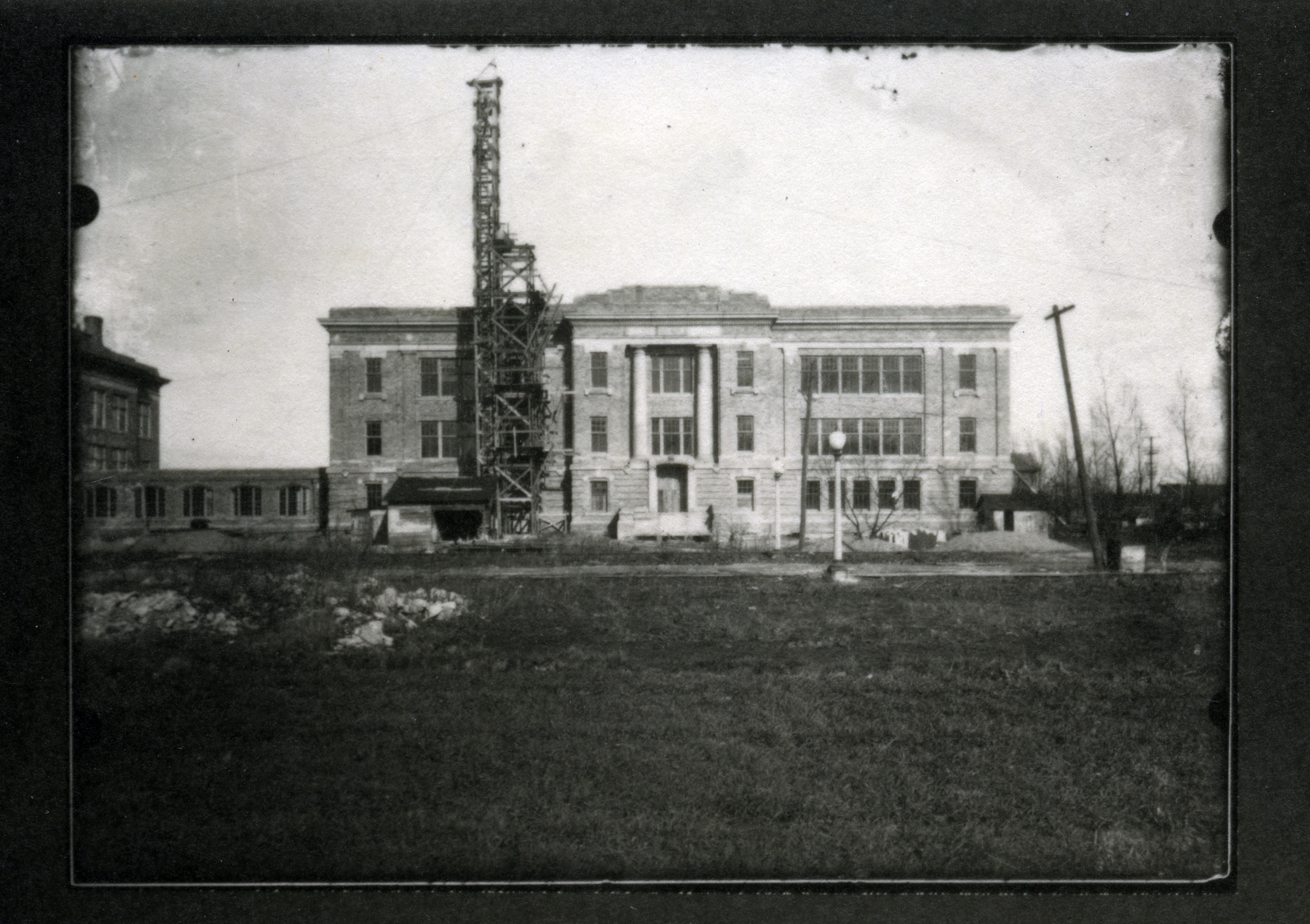 Early construction of the building was halted due to material shortages after World War I. 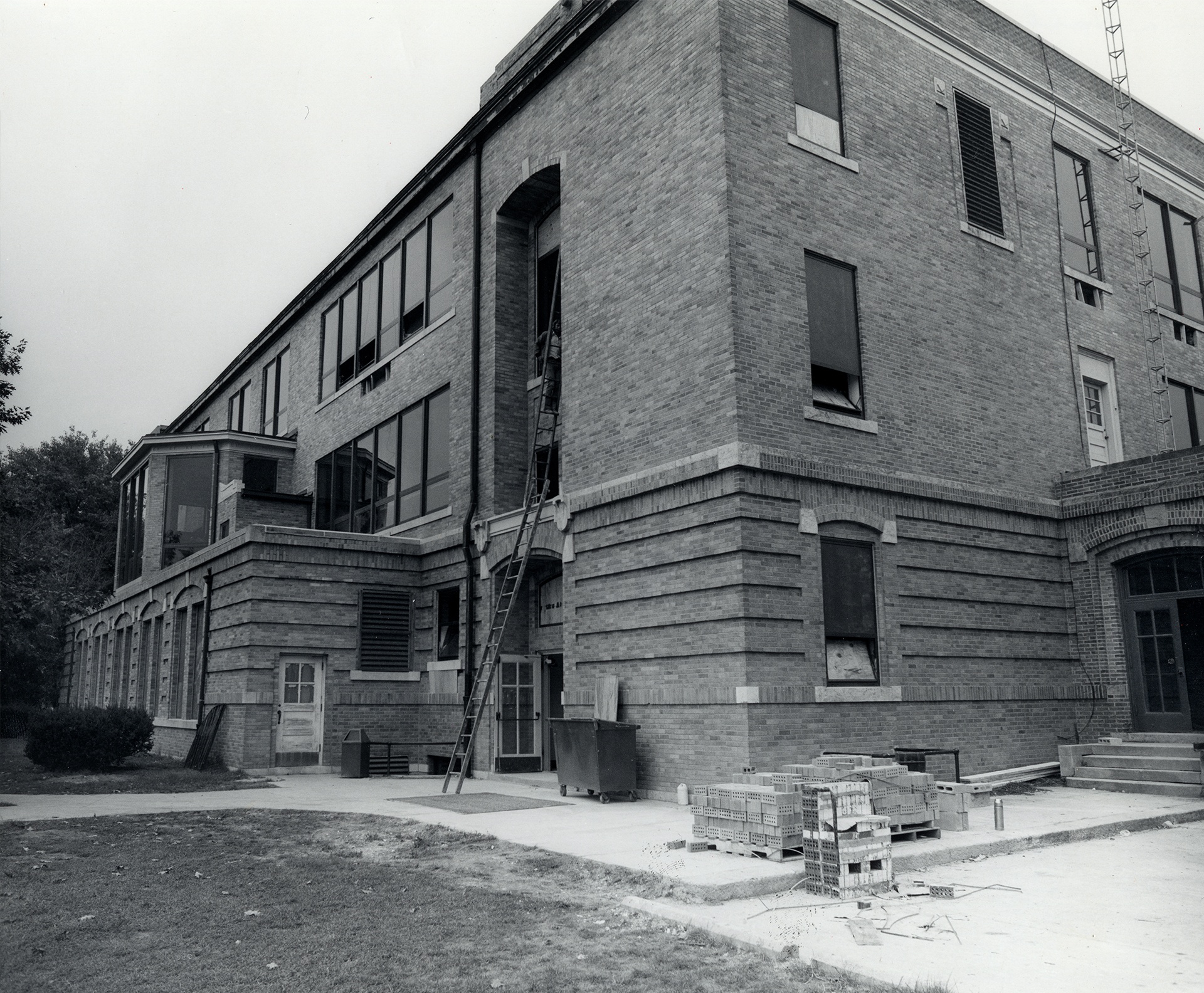 One of the many times renovations were made to the building over the past 100 years. 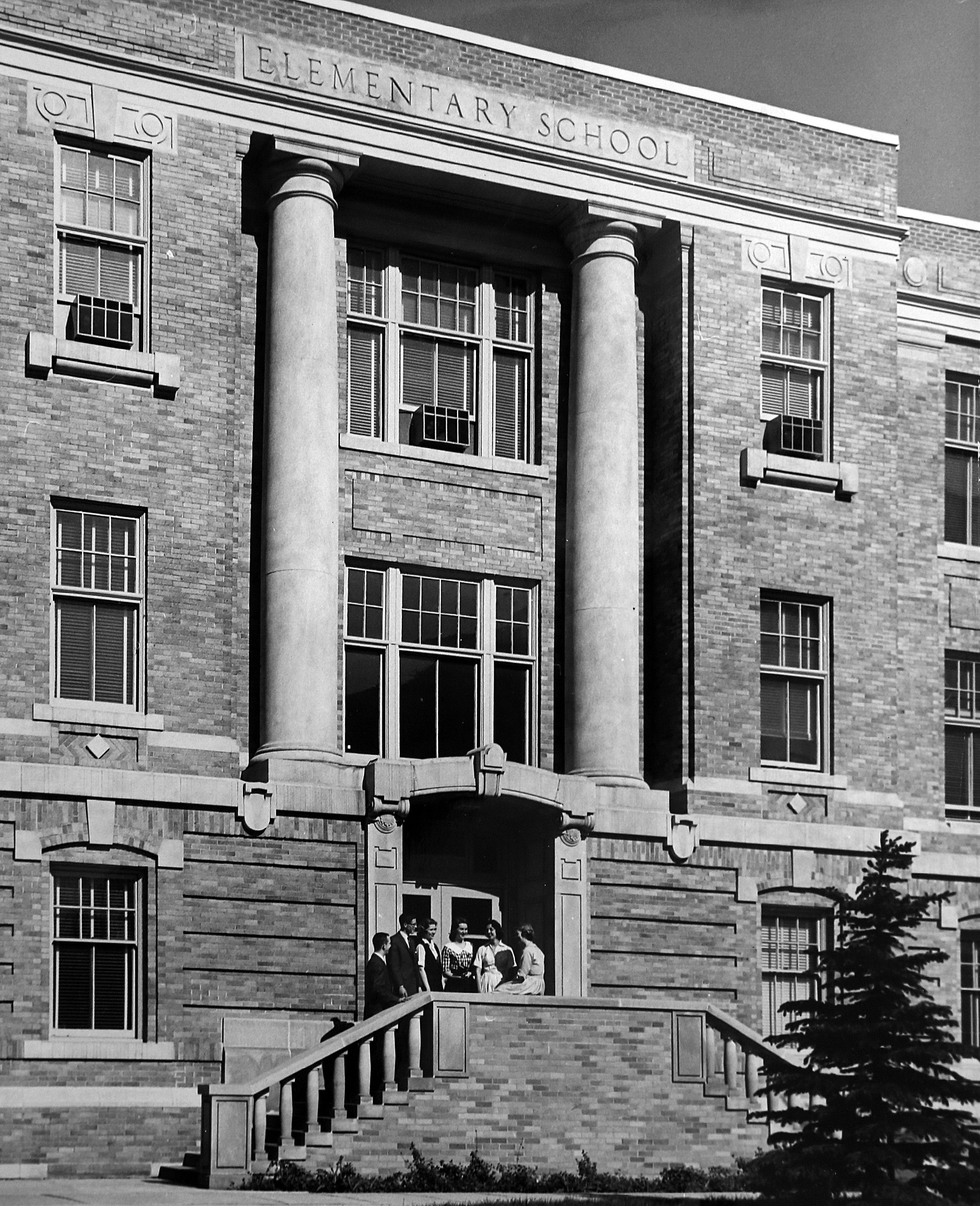 Students meet on the steps of the Elementary School. 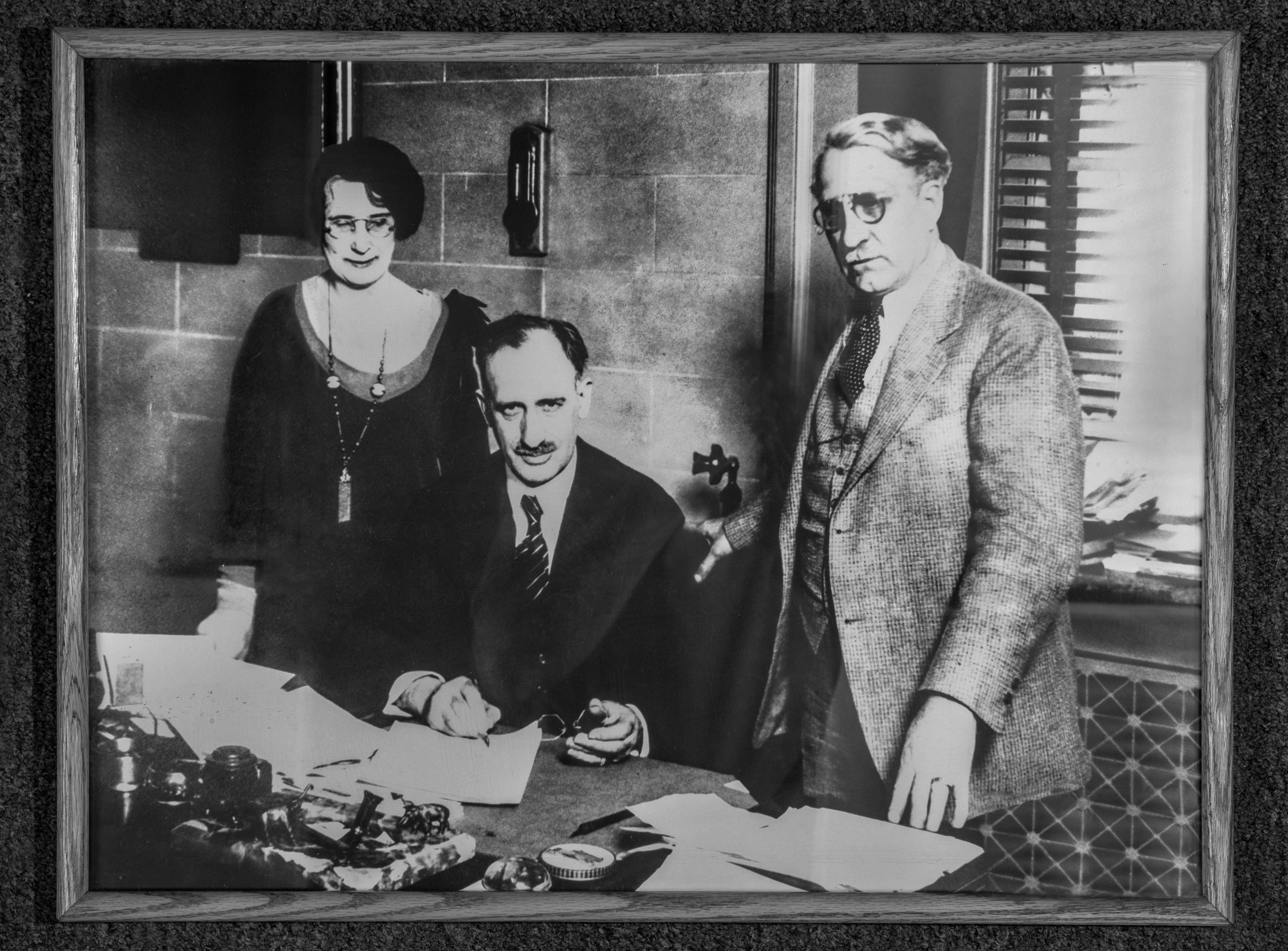 Myrna Hanna joins Gov. Myers Cooper and Sen. Van Everett D. Emmons for the signing of the Emmons-Hanna Bill in 1929. 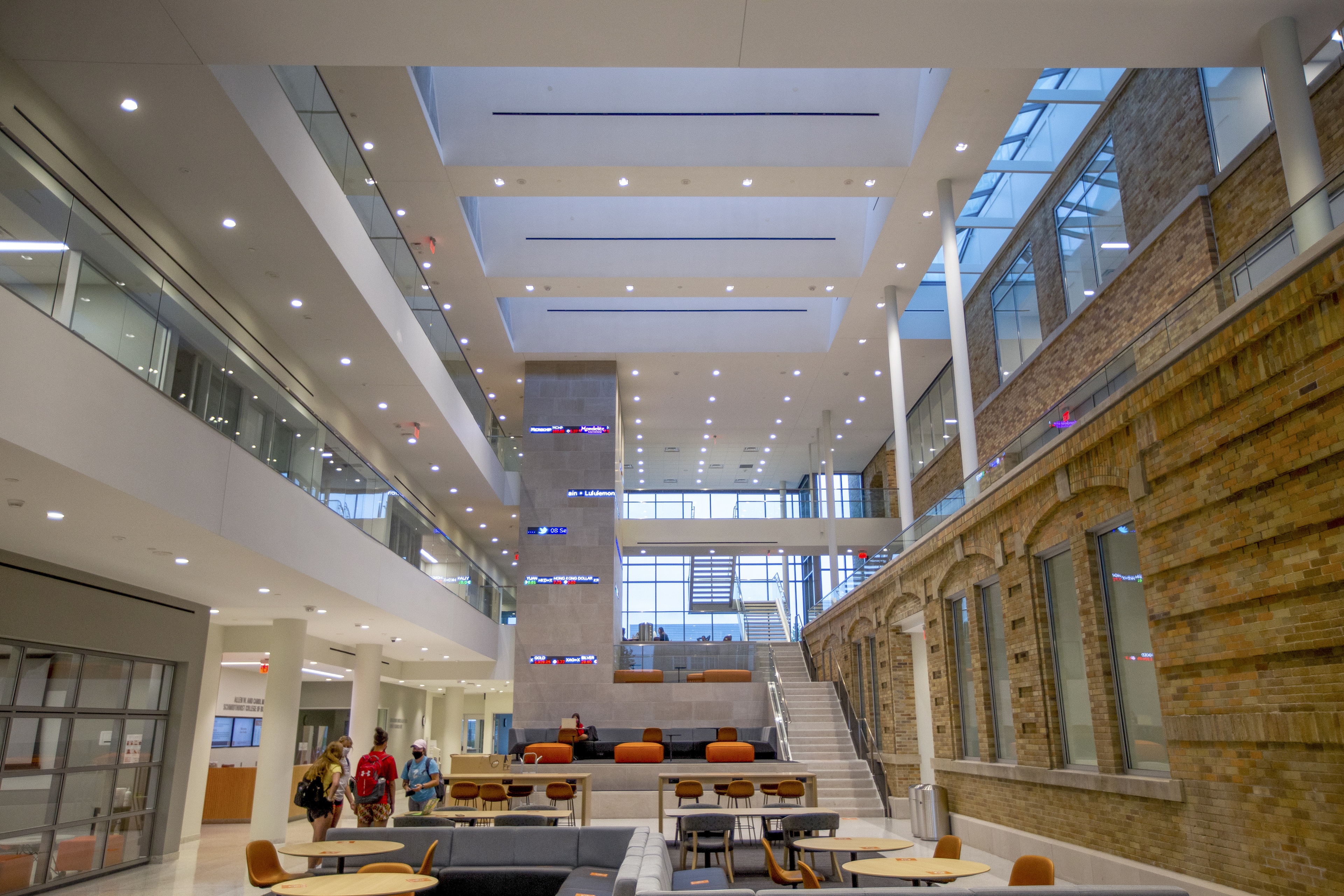 Renovations in 2020 successfully combine the historic feel of Hanna Hall and a modern-day environment for the home of the Schmidthorst College of Business.