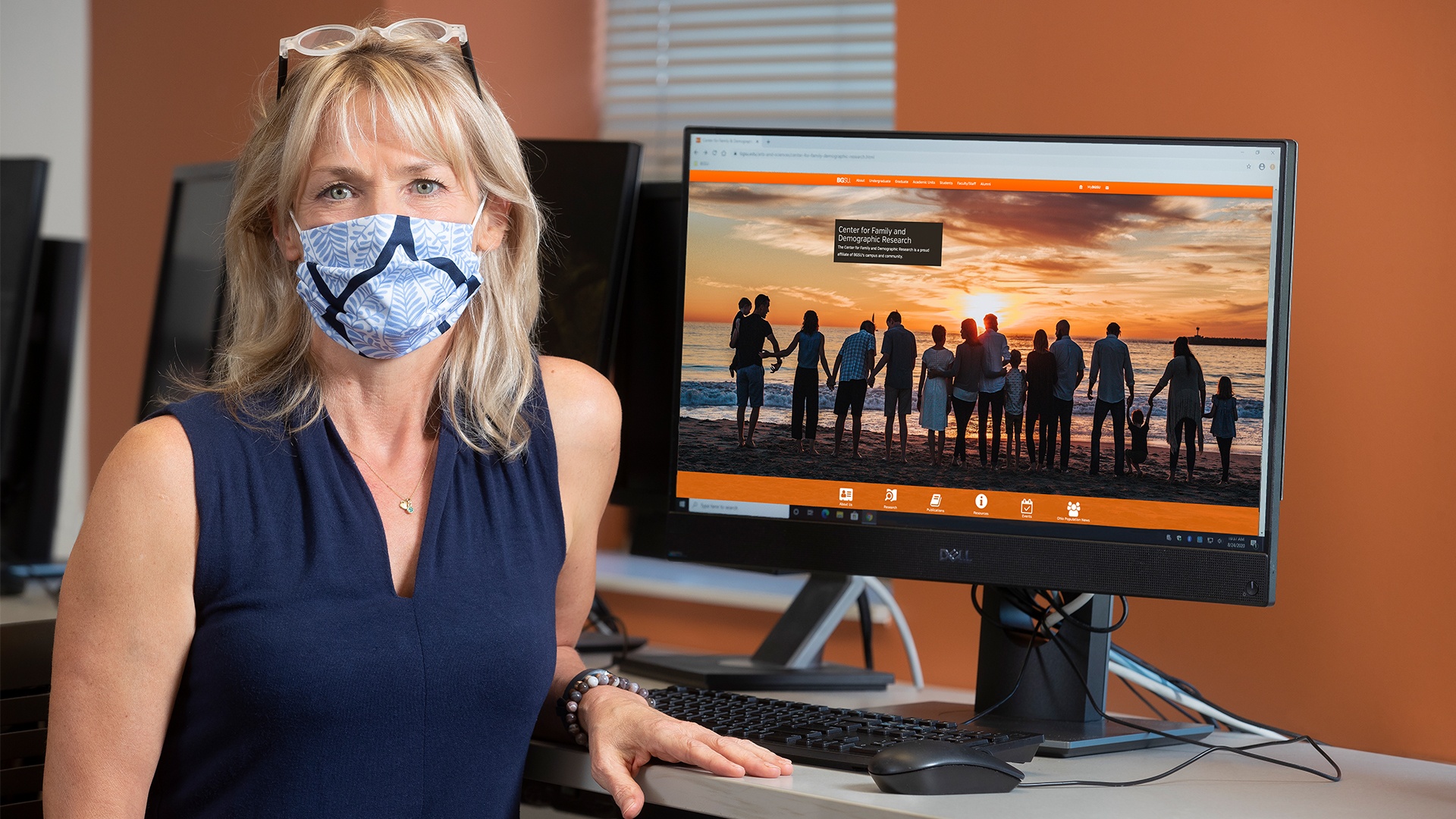 A Bowling Green State University researcher helps Ohio health agencies make informed decisions about health care programs for Ohioans. Dr. Kelly Stamper Balistreri, an associate professor of sociology, finds joy and purpose as she delves into statistics such as income, education, employment, prevalence of illness and disease in her work as a population scientist.

As a member of the executive committee for the Ohio Medicaid Assessment Survey, she helps develop survey questions, plan the field work to ask the questions and analyze the collected data.

“The survey, which started in 1997, asks a series of questions every few years via phone, in person and online to thousands of residents of all ages, ethnicities, incomes and educational levels,” she said.

The Ohio Department of Medicaid and many additional agencies that deal with minority health, mental health and addiction services, developmental disabilities and aging are always eager to review the survey results, Balistreri said. They use the results to identify health services and system gaps, and to assist in developing strategies for improving health services to Ohio’s population. The data also provide rich statistics for grant applications, academic publications and presentations, health initiatives and philanthropic activities.

Balistreri, who is also the interim associate director of BGSU’s Center for Family and Demographic Research (CFDR), got involved with the survey when she received one of the competitive grants to work with the data. After several years of receiving the grants, she was asked to be one of the 40-member executive committee that administers the surveys.

“It’s a joint effort of academics from around the state working with representatives from the agencies to improve the health of Ohio,” she said. And while the survey name references Medicaid, the data benefits many agencies, researchers and communities across the state.

With data that was finalized just before COVID hit, her work will focus on two projects: Women’s Health in Ohio and Social Determinants of Health in Ohio.

The women’s health study “will examine women in different stages of the life course,” she said. “We will look at their unmet health needs, what might be some of the challenges or barriers they face to obtaining health care and what are their health behaviors such as weight status, smoking behavior and drinking behaviors.”

Social determinants have become an important focus when studying health.

“Health doesn’t just happen by our behaviors - what we eat, whether we smoke and exercise,” she said. “It’s formed from where we’re born, where we grow up, how we live where we live.

“There’s a lot of interest right now trying to understand how poverty or education or housing conditions influence your health behaviors and your health outcomes.”

There are most likely many examples about how the survey has helped agencies and decision makers improve the health services for Ohioans. One of the most notable during Balistreri’s tenure thus far involved the expansion of the Medicaid program in Ohio.

One of the projects she was hired for was to examine, at the population level, what impact expanding Medicaid could have on Ohioans. She looked at data about the people who were not covered by Medicaid at the time and what kind of problems they had?

In order to be eligible for the state-sponsored Medicaid health care at the time, recipients had to be considered low income and have a child at home.

“The questions I posed were, ‘Who else needs health care and isn’t getting it; what kind of health care behaviors do they have, and what are their health care needs?’”

In her analysis, she discovered two main groups that were left out: young adults with lower incomes and no children, and who often had risky behaviors, and women of low income who were between 50 and 64 years old and without a child in the household.

“With both groups there were a lot of unmet needs for mental health care and drug treatment,” she said. When the decision was being considered whether to expand Medicaid in Ohio, then-Gov. John Kasich looked at the OMAS results as part of his decision making. As of January 2014, eligibility for Medicaid coverage was extended to low-income adults; they no longer needed to have a child at home to be eligible.

“Dr. Balistreri’s work on the Ohio Medicaid Assessment Survey is a terrific example of how the research conducted by population scientists at BGSU advances the public good,” said Dr. Susan L. Brown, chair of the sociology department.

It’s about the decision-making

As an applied demographer, Balistreri’s job is to use the data to help ensure there is informed decision making.

“I like working with the people from these organizations, because I feel like they’re really using the results of this survey to solve some problems," she said.

The process is interesting, she said. “These agencies say ‘these are our concerns, here’s what we’re seeing from our programs,’ so they come to the table with these concerns and ask, ‘how can we learn more about this perspective with respect to Ohioans?’”

When setting up the survey questions, the OMAS teams try to hone in and make each question count. “Because we only have so much time (with the people being interviewed), we want to make sure each question gives us some piece of information that we can use to really help agencies plan and understand what’s going on.”

“The work is very tangible and has very real applications,” she said. “Helping the agencies and decision makers make informed decisions for Ohioans’ health is at the heart of it,” she said.