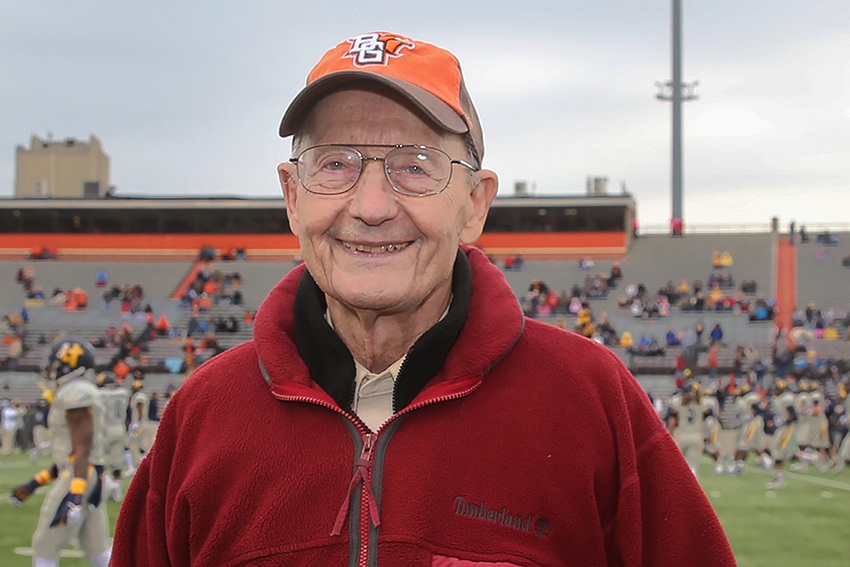 In 1948, Bohrnstedt, a BGSU assistant professor of music, composed the Forward Falcons music and Sidney L. Freeman, a graduate assistant in English at the time, wrote the words. The song premiered at the Oct. 16, 1948 football game between the Falcons and the Golden Eagles of Morris Harvey College (now University of Charleston).

Bohrnstedt taught music composition at BGSU from 1947-1953. He moved to Redlands, California, in 1953 where he taught at the University of Redlands until he retired as professor emeritus of music in 1993.

BGSU honored him on Oct. 26, 2013, which was declared Dr. Wayne Bohrnstedt Day. He was welcomed back to campus and recognized during the Falcon Marching Band Pre-Game Concert and at halftime of the football game. The day celebrated the 65th anniversary of the song’s introduction.

Bohrnstedt's obituary details his many other accomplishments..

Show our spirit,
make them fear it,
Fight for dear Bee Gee.

Hold up the fame of our mighty name, and win for
Bowling Green