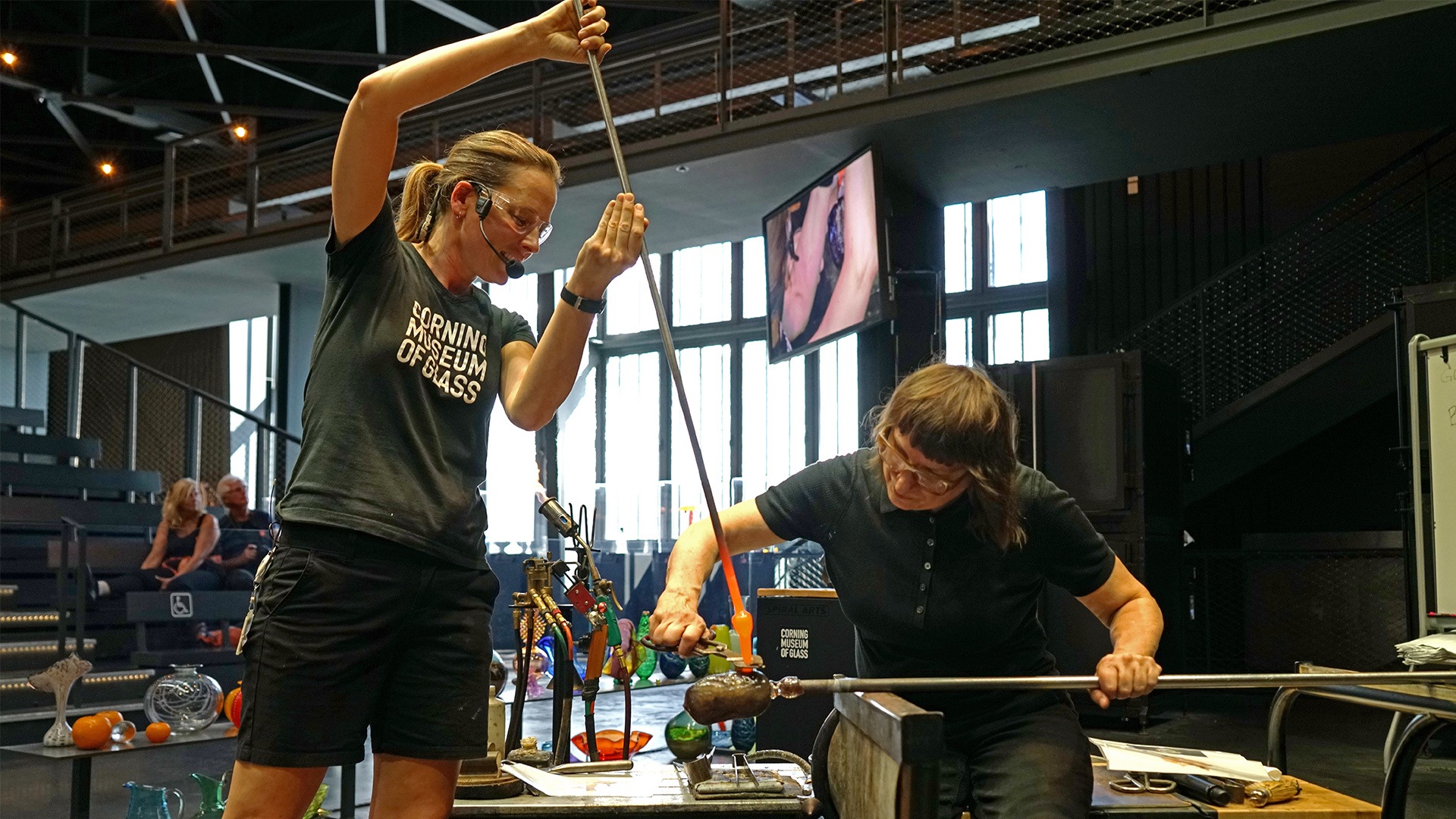 Behind the scenes of Netflix hit show ‘Blown Away’ 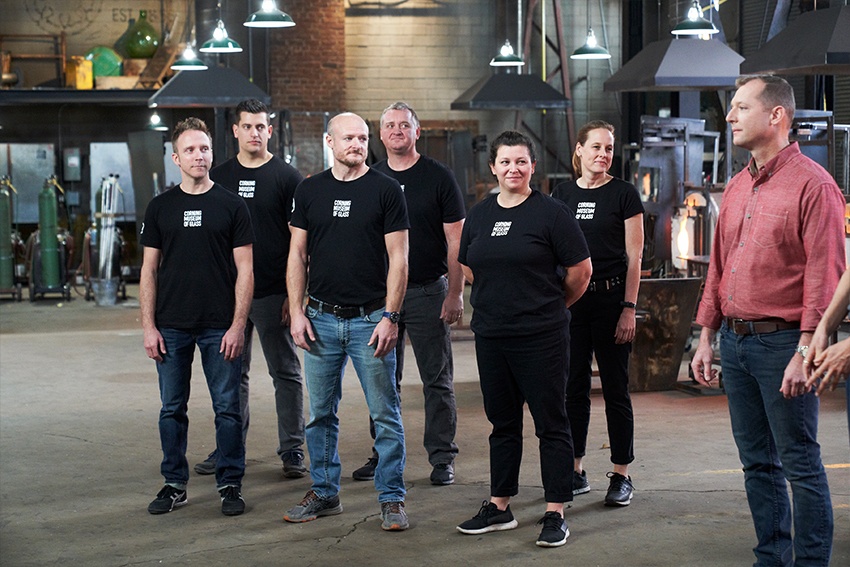 Eric Meek '96, far right, and the glass artists from the Corning Museum of Glass, including Tegeler, back row, right. 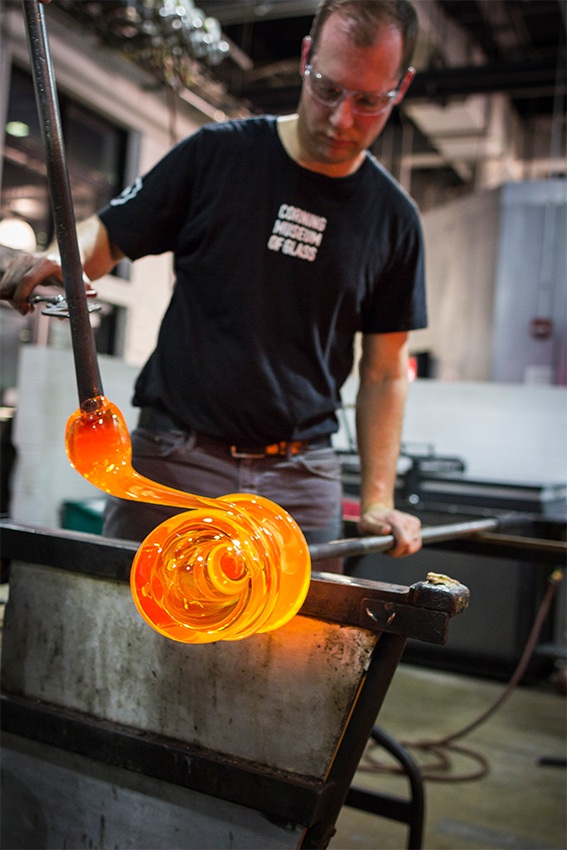 Meek is the senior manager of Hot Glass Programs at the Corning Museum of Glass. 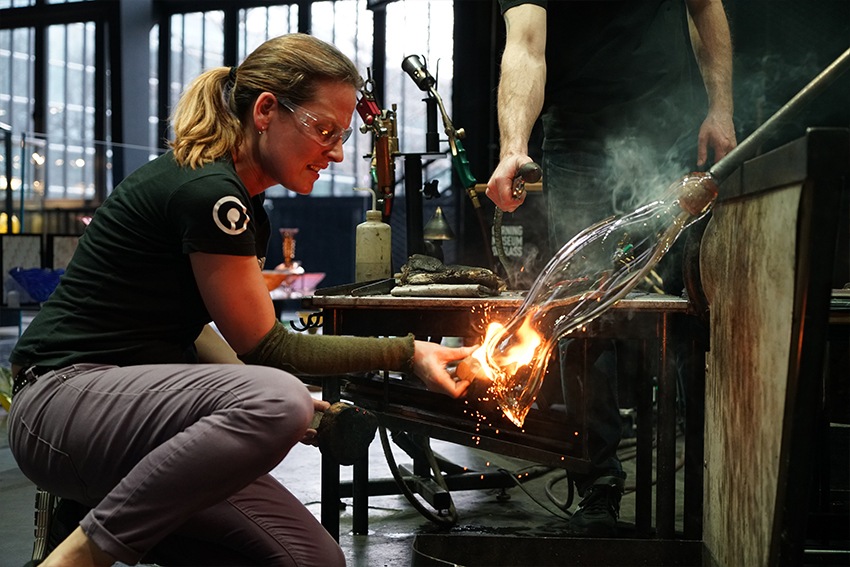 Tegeler started working as a glass artist at Corning in 2011.

If, like many of us, you’ve binge-watched a series or two during the COVID-19 pandemic, you may have come across the hit competition show “Blown Away” on Netflix.

“Blown Away” is a show that follows a group of 10 highly skilled glassmakers who, over the course of 10 episodes, make beautiful works of art that are assessed by a panel of expert judges. One artist is eliminated in each 30-minute episode until a winner is announced in the final episode.

The Corning Museum of Glass, which houses the world’s most comprehensive collection of glass, the library of record on glass, and one of the top glassmaking schools in the world, served as a key consulting partner on the series.

Eric Meek ’96, senior manager of Hot Glass Programs at Corning, served as a guest evaluator for the series finale, helping to select the winner of the competition. Also, involved in that episode were six of the museum’s expert glassmakers, including Helen Tegeler ’97, who assisted the two finalists in realizing their last challenge.

The winner of “Blown Away” was awarded the title of “Best in Blow” and a prize package valued at $60,000, which included a week-long guest artist appearance at Corning.

“The Corning Museum of Glass inspires people to see glass in a new light,” Meek said. “’Blown Away’ is a global platform, and it’s exciting to think about how the show has broadened glassmaking’s level of exposure.”

The series was filmed in the largest glassblowing studio ever built in North America, designed specifically for the scope and scale of the competition. The space allows 10 artists to work simultaneously, using two large glass-melting furnaces, 10 reheating furnaces and 10 individual work stations.

Meek grew up in Jewell, Ohio, just east of Defiance. After graduating from Tinora High School, he attended Bowling Green State University and double-majored in environmental science and German, but he also wanted to take some art elective classes.

“I was undecided in the beginning and I wanted to take an art elective,” Meek said. “By the time I decided to take a drawing class, it was full. So, I signed up for glassblowing because it sounded like fun.”

He took glassmaking classes with the late professor Bud Hurlstone, and he was hooked.

Tegeler, who earned a Bachelor of Fine Arts with a specialization in glassmaking from the University, had a similar introduction to glassmaking at BGSU.

She arrived at Bowling Green from Troy, Ohio, set on becoming a graphic artist, but after taking her first glassmaking class as a freshman, she “fell in love with it immediately.”

Now, she has been a glass artist for more than 25 years.

“To be honest, I didn’t know anything about glass before I went to Bowling Green and they had a glass program that was offered as part of the art department,” Tegeler said. “I kept taking classes and I ended up with that degree, but it really wasn’t until I got jobs once I left college that it really sunk in it that I could do it as a career. Most of my employment since I left Bowling Green has been glass related. I feel very fortunate.”

Adding a ‘level of professionalism’ to the show

Tegeler, who started working at Corning in 2011, is a full-time gaffer at the museum. In her words, she “blows glass and narrates, basically demonstrating glassmaking for the public.”

Glassblowing, in general, she said, requires the help of at least of one assistant. Throughout the course of “Blown Away,” the contestants were given one student each from Sheridan College in Toronto to assist them for the first nine episodes, but in the final episode — when it came down to the final two contestants — Tegeler and her coworkers assisted the finalists.

“It was a way of adding people and a level of professionalism,” she said. “Not that the Sheridan students weren’t great, but we were able to assist those final contestants in making much more complicated and immersive work.”

Meek started working at Corning as a seasonal glassmaker in 1999.

“The museum typically hires a lot of glassmakers in the summer to do demonstrations for the public,” he said. “I was seasonal help and that eventually evolved into a career here as a glassmaker and now I manage the glassmaking program. I basically organize an eight-person team (that includes Tegeler and another BGSU alumnus, Jeff Mack ’96) that demonstrates glassmaking at the museum. We do hundreds of demonstrations a year.”

After graduating from BGSU, rather than start a career in environmental science, a glassmaking opportunity at the Henry Ford Museum in Dearborn, Michigan, came his way.

“I thought at that time, I really enjoy blowing glass, so I’ll go to the Henry Ford Museum blow glass for a few years and hang out at a museum and then I’ll get into my career,” he said, laughing. “I wound up working at Henry Ford for a couple years and I found out that working at museums was something that I really enjoyed.”

Taking the show from concept to reality

Meek had to vet the production of “Blown Away,” from the hosts to who the contestants were going to be, making sure it was a good partnership for the museum. Also, Meek said, “by sending our crew from the museum to the show — glassmakers with decades of experience — it was a game-changer for the competitors.”

On the final episode, Meek had the unique challenge of evaluating the final product and helping pick the winner of the first season. He didn’t feel the pressure until he was there with the competitors.

“We found when we got there that these competitors had been away from their homes and families for a month to be a part of this really creative and competitive environment,” Meek said. “When you get there, it’s like, wow, none of the drama on the show is fabricated, it’s real drama. These artists are really pouring their heart into this; they really want to win. It was really difficult to do what I was there to do, which was help pick a winner. Your heart went out to both of them because they both poured all of their energy into it.”

‘Blown Away’ put spotlight on Corning

“Blown Away” proved to be really popular on Netflix and with the media.

“It’s been fantastic,” Meek said. “There was really great press about the show. It was written up in the New Yorker, New York Times, Wall Street Journal, Washington Post and Esquire. Some people thought it was a quirky novelty, which was about the most negative that was written. A lot of people thought it was a really fascinating glimpse into this niche thing people don’t think about very much.”

For the museum, it’s resulted in increased visitation, he said, both in person and virtually.

“Hits on our website went up something like 150 percent when the show came out,” Meek said. “It’s had real results for us as an institution. We also have some of the work of the competitors on display at the museum and fans of the show want to see what they saw on TV, so many have come specifically to see that.”

“To me, glassmaking is a beautiful process,” he said. “Glass is an amazing material to coax into a form, and I fell in love with the process at Bowling Green. I grew up a tiny town and farming community where everybody does things with their hands by themselves. Coming from that background and taking this material I was unfamiliar with by putting that work ethic behind it to create objects, that process has always been fascinating to me.

“At a museum, that process is celebrated. The objects are celebrated but the process is also celebrated. To me, that was always more important than the product. I don’t have this personal, artistic vision that I have to share with the world, but I’m really happy working in a place that does have that artistic voice and is willing to express it — and to be around people who also love the process.

Being able to be around the glassmaking craft at Corning and to share with the public what they do is a “tremendously satisfying career,” Meek said.

“I do owe a debt of gratitude to Bowling Green for having a variety of offerings. I loved my time of glassmaking at Bowling Green. I also value incredibly the lessons I learned through the study abroad program and the German department — all of that sort of wove together to create the person I am today and I’m really grateful that Bowling Green gave me those opportunities.”