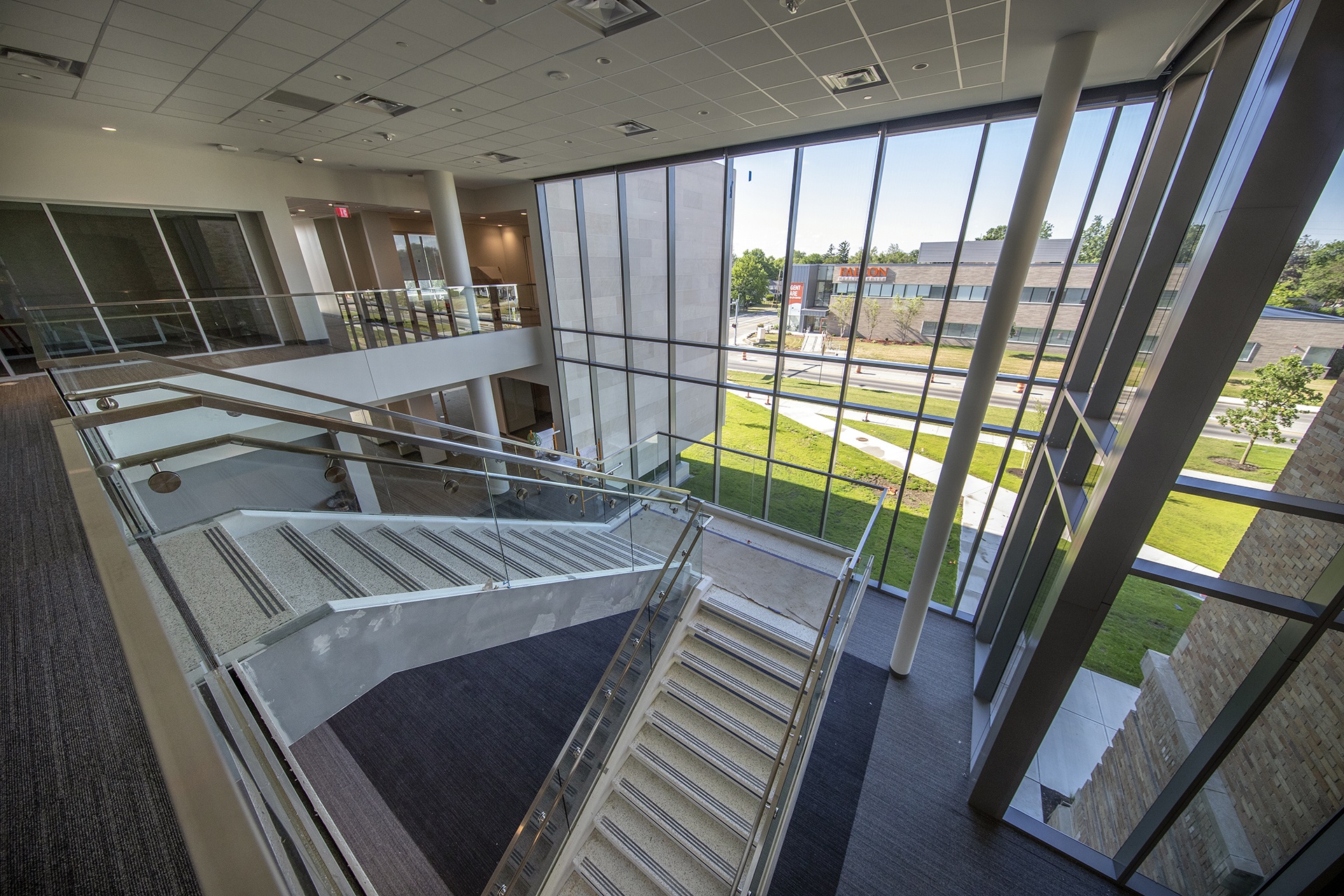 BGSU Board of Trustees approves donor-named spaces at Maurer Center

Over the last two years, the Robert W. and Patricia A. Maurer Center has risen over Wooster Street to become a gleaming gateway to the Bowling Green campus.

The building’s story, however, began long before its groundbreaking, with the support of donors who recognized how the facility would provide a transformative educational experience for the students who would learn within its walls.

As the new home of Bowling Green State University's College of Business nears completion, philanthropic support has not waned as the Maurer Center prepares to open its doors to students this fall.

BGSU’s Board of Trustees recently approved a number of donor-named spaces recognizing the support of friends and alumni who are committed to the center’s cutting-edge vision through their financial gifts:

Jim and Karen Adams Career Accelerator Suite – This first-floor space designed for career resources is named for alumni Jim ’92 and Karen ‘91 Adams, who earned their degrees in accounting and education, respectively. Jim Adams is the vice president of strategy and performance management for O-I. The couple have supported BGSU through many gifts to the College of Business and College of Education and Human Development, including several scholarship funds.

Gary D. Benz Family Collaboration Space – This second-floor meeting room is named for Gary Benz ’81, who earned his bachelor’s in journalism and political science from BGSU and serves as senior vice president of strategy for FirstEnergy Corp. Benz and his wife, Betsy Karetnick, have supported BGSU previously with gifts to the College of Business and the Alumni Fund.

Joseph V. and Judith M. Conda Foyer – With their support of the Maurer Center and many other programs at BGSU, it’s fitting that the building’s entryway will honor Joseph and Judith Conda. Joseph Conda, who retired in 2018 as president of TripleFin LLC, is a member of the Paul J. Hooker Center for Entrepreneurial Leadership Advisory Board. Judith Conda worked as a special educator and behavior consultant with Perrysburg and Rossford schools, retiring in 2003. She serves on the College of Education and Human Development Leadership Council.

They have supported a number of initiatives at BGSU within the College of Business and College of Education and Human Development, including funding a student awareness campaign for the Counseling Center, as well as gifts to Literacy in the Park, the Higher Education and Student Affairs Fund and Women for Philanthropy, among many others.

Conda-Maurer Terrace – In addition to the significant commitment of Robert and Patricia Maurer to support the construction of the new home of the College of Business, they made a second gift to challenge and encourage other donors to contribute to the project. Their longtime friends, Joseph and Judith Conda, met that challenge, and the terrace on the third floor of the Maurer Center will be named in both their honors.

Their most recent gift to support the Marketing Department Suite on the second floor caps many years of support for both the College of Business and the College of Education and Human Development. They have previously established the Jones Family Nursing Scholarship and the Jones Family Business Scholarship, as well as supporting the Football Enhancement Fund and The Excellence Fund for BGSU.

Rick and Alicia Kappel Faculty Office – Richard Kappel Jr. ‘69 earned a bachelor’s degree in business from BGSU and now works as an independent management consultant after retiring as president of Advanced Computer Systems. He and his wife, Alicia, have supported BGSU through gifts to the College of Business Student Ambassadors Fund, the Thompson Working Families Scholarship Fund and the Phi Delta Theta Chapter Ohio Kappa Greek Village House Fund. They also have supported BGSU student-athletes through the Athletic Fitness and Weight Room, Football Enhancement Fund and the Falcon Club Scholarship and Success Fund.

Lucy Keil Budget Administration Office – The budget administrator office on the second floor will be named after an impactful professor who helped foster an interest in accounting for 1979 alumna Diane Tymiak. A member of the International Business Board in the College of Business, Tymiak is the vice president and chief financial officer for Glasstech Inc. Tymiak has also supported the Stroh Convocation Center Fund, the Women’s Basketball Enhancement Fund, the BGSU Foundation Board Challenge Fund, The Excellence Fund for BGSU, and the Falcon Club Scholarship and Success Fund.

Edward W. and Lynn J. Limbach Collaboration Space – A 1961 graduate of BGSU, Edward Limbach retired as vice president of the American Water Works Co. Edward and Lynn Limbach previously established an Alumni Laureate Scholarship in their name, as well as supporting the Stroh Convocation Center Fund, the Alumni Fund for the Student Union Capital Improvement Endowment Fund and The Excellence Fund for BGSU.

JM Focus Room – Jianing Min earned a master’s degree in business in 2012 and a second master’s in applied statistics in 2014. She is a data analyst for the Ford Motor Co. In addition to this gift, she has supported the College of Business, the Applied Statistics and Operations Research Fund and the Student Emergency Fund.

Gregory and Karen Stefani Office – This faculty office on the second floor is named in honor of Gregory and Karen Stefani. Gregory Stefani, vice president and chief operating officer of the Federal Reserve Bank of Cleveland, is a three-time alumnus of BGSU, earning his bachelor’s degree in finance in 1983 followed by a master’s in accountancy in 1986 and a master’s in business in 1993. He was recognized in 2015 with the College of Business Alumni Award and also serves on the college’s Leadership Council. He and his wife, Karen, have supported BGSU previously through gifts to the College of Business and the Finance and Insurance Department.

The Maurer Center will open to students in Fall 2020. A grand opening celebration will be planned for later this year.