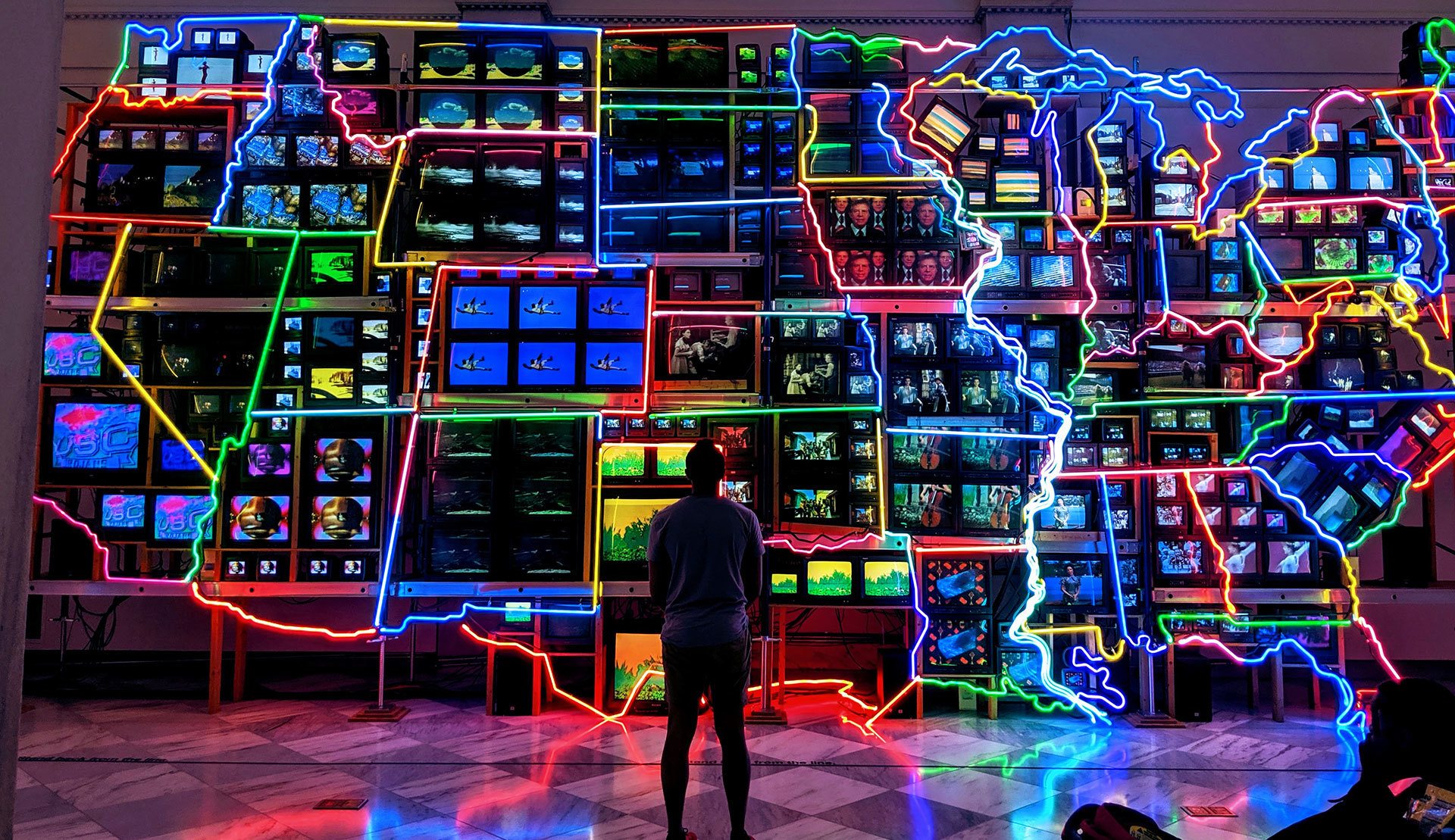 Past to present: A musical journey to African-American string band tradition 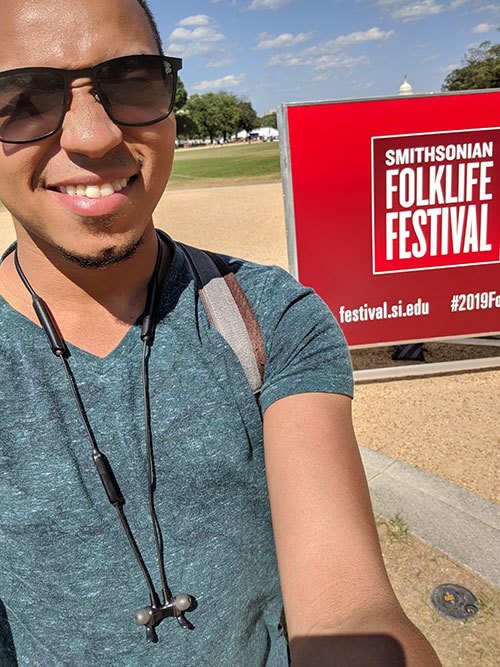 Growing up in Xenia, Ohio, there was always music in my house. From my father practicing piano for church and my mother’s singing every morning, music was a part of my life from as early as I can remember. In my black musical family, I have grown up listening to gospel music, but was also exposed to a variety of styles throughout my life. I also heard stories from my grandmother about her life growing up in Asheville, North Carolina, and the types of music that she heard as a child. Through the troubled history of slavery, Jim Crow and the Civil Rights Era, black music in the United States has gone through many changes and adaptations over time. While a student at Xenia High School, I decided to study music in college and I take up the instrument of my father and his father before him — the saxophone

Through my studies here at Bowling Green State University, I was introduced to the world of music through my classical education. As I had a deep-rooted desire to learn about the musical diversity of the world, I came across a group of artists who were rather unexpected. In a world music class, I was introduced to a band called the Carolina Chocolate Drops, led by Rhiannon Giddens. This Appalachian string band consisted of four black musicians playing instruments such as the banjo, fiddle, bones, washboard, and guitar. This was initially unsettling to me, but for some reason, I felt an instant connection with the work that they were doing. Upon further research, I discovered that there has been a long tradition of people of color playing folk music like this as well as evidence that the banjo is an instrument that came from West Africa. BGSU gave me the opportunity to connect with this living music community and access to an internship at the Smithsonian Institute through the Stuart R. Givens Memorial Fellowship this summer.

As a saxophone performance major here at BG, picking up a string instrument for the first time has been a learning experience all in itself. Many of my peers have appeared to be confused when I tell them that I am picking up the banjo — surely not a standard instrument for doubling in my situation. The most difficult part of the new instrument would surely be the concept of plucking or strumming a string instead of blowing air to make sound. Once I leaped that hurdle, it became apparent that I had to begin to understand how to both accompany and play melodic passages at the same time. 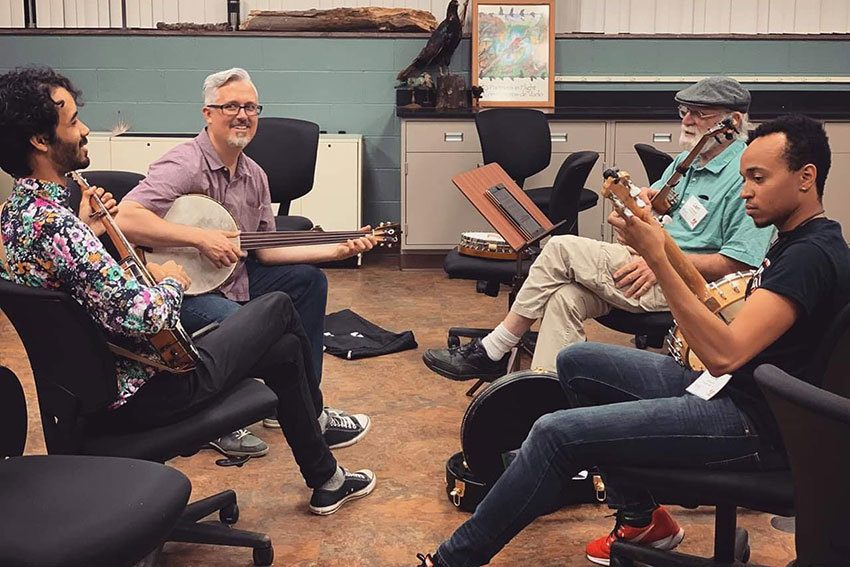 These skills are issues that I am still working through, as well as new finger patterns with each hand. The theory and aural skills courses that I took my freshman and sophomore years became my saving grace as it became easier to listen for correct chords and figuring out the melodies. However, I noticed that at most of the jam sessions that I attended this summer, a number of people were struggling with the same issues. This made me much less self-conscious of my playing as I was able to strum chords in the back of the group with others in the same place technically. I am currently continuing my practicing and hope to get better now that one of my professors has started an old-time jam this semester on campus. I hope to use this year to hone my skills and find a private teacher for Skype lessons now that I know more clawhammer banjo players!

The Stuart R. Givens Memorial Fellowship allows students to enhance their educational experience by designing unique learning experiences outside of regular academic programming. I could not say that my experience was shaped by one thing in particular, but by a combination of the people I met, the music I learned, and the document research I was able to conduct.

At the Midwest Banjo Camp at Olivet College in Michigan, I met and befriended a number of Appalachian old-time musicians. I bonded with another black man who was teaching a class on black minstrel banjo music. Though he was traveling the country throughout my experience, he was able to help connect me with a number of old-time jams and concerts during my time in Washington, D.C. We bonded on our common experiences as queer people of color in the old-time community. In addition to meeting Jake, I was also introduced to a number of notable old-time musicians and was given the opportunity to participate in their various classes and workshops throughout the camp. The Midwest Banjo Camp also brought in a number of guest artists and staff musicians such as Special Consensus and Robert Winans.

Another person I met at the camp was Gregory Adams, with whom I had corresponded previously. Working at the Smithsonian Folkways, he was a valuable resource when I arrived in Washington because he provided me mentorship as I furthered my research and connected me with other academics in similar fields of study.

When I traveled to Washington, D.C. for the second part of my experience, I had the pleasure of interning in the Smithsonian Office of Fellowships and Internships. As part of this, I wrote blogs about events, people and resources at the institution and facilitated communications between the other interns and our office. On top of this, I had access to the Smithsonian Libraries to do independent research on folk music and my family’s heritage. I was able to see where my family lived in the Carolinas and the official jobs they held post-slavery. It was wonderful to find this information about my family’s roots at the National Museum of African American History and Culture (NMAAHC). In addition, I gained access to the Smithsonian Institution Libraries and some of the archives at the Smithsonian Folkways Recordings.

There was a great deal of unexpected construction at the facilities, so much of the archives were difficult to access. However, many of the items held by the folkways section, I realized, were also housed at the Library of Congress. Therefore, I spent a great deal of my time in the stacks at the library, assisted by a number of wonderful master librarians in the American Folklife Center. While there, I was also made aware of a public jam that Dom Flemons of the Carolina Chocolate Drops was hosting. Therefore, on my last Sunday afternoon, I had the opportunity to participate in a jam session with him and learn parts of his songs.

In addition to my internship and research, I had many opportunities to participate in the old-time community. Through friends that I had made, I was introduced to a number of old-time jams in the area that I could participate in. The atmosphere of jam sessions was very lively and welcoming; my performance anxiety melted away when one woman named Susie stood next to me on the outer circle and we bonded over our struggle to keep up with the other, more seasoned musicians. Through these jam sessions, I was introduced to more jams, concerts and community events that I was able to participate in. It became very exciting after the first few weeks as I began to see the same people at many of the events and activities I attended throughout the week. It really is a strong, vibrant community of caring people who genuinely enjoy the act of music making together.

The Smithsonian Folkways also hosted the Smithsonian Folklife Festival, which was a great weekend of traditional music and arts on the National Mall. The theme of this year’s festival was focused on the social power of music. Therefore, there were a number of interactive exhibits. I participated in communal drum circles, pop-up choirs, and even in an impromptu old-time jam. They also brought in GrandMaster Flash to DJ a set during the festival’s last day.

One friend I had met at the Takoma Park jam session also introduced me to a game shop called Labyrinth Games. Having a love of board games brought us together to this shop that hosts regular open board gaming nights. This was yet another way that I was able to connect with a great group of people with similar interests to mine.

While I was in the city, I also had the opportunity to see a number of notable artists both in folk music and blues. As the Carolina Chocolate Drops had broken up, Rhiannon Giddens started a new group called Our Native Daughters. Consisting of four black female banjo players, the new band is the most important project of the year in folk music. My friend Jake made it back to town in time for their tour date at NMAAHC and was able to get our names put on the guest list as a friend of Giddens. This was incredible because I was given the opportunity to sit in the front row of the concert and meet her and the rest of the band.

Later that week, I saw the Taj Mahal quartet playing at The Birchmere in Alexandria, Virginia. I also was connected with a group called Hamlin Street Diner who were known for doing regular house concerts at the Public Option pub on Rhode Island Avenue. This was another great way to see more folk artists throughout my time there.

Through meeting a number of musicians, scholars and gamers alike, I quickly felt right at home in Washington, D.C., and I was very sad when my time had ended there. Through communal musicianship, the doors for my musicological research and further participation in this world have been opened wide. Many of the professionals I met introduced me to opportunities that I plan to pursue as I further my studies, and I am looking forward to the next time I will get to see all of my new friends, mentors and colleagues!

Now that I am back in Ohio, I hope to use my experience to further the conversations surrounding people of color in the folk music community and issues with LGBTQ inclusionary practices. I am also excited to be helping form an old-time music ensemble here at the College of Musical Arts to spread folk music among the student body here. My experience of participating in this music culture has intensified my desire to further public understanding of black musicians in American folk music, and help highlight the joys of being part of such a vibrant tradition.