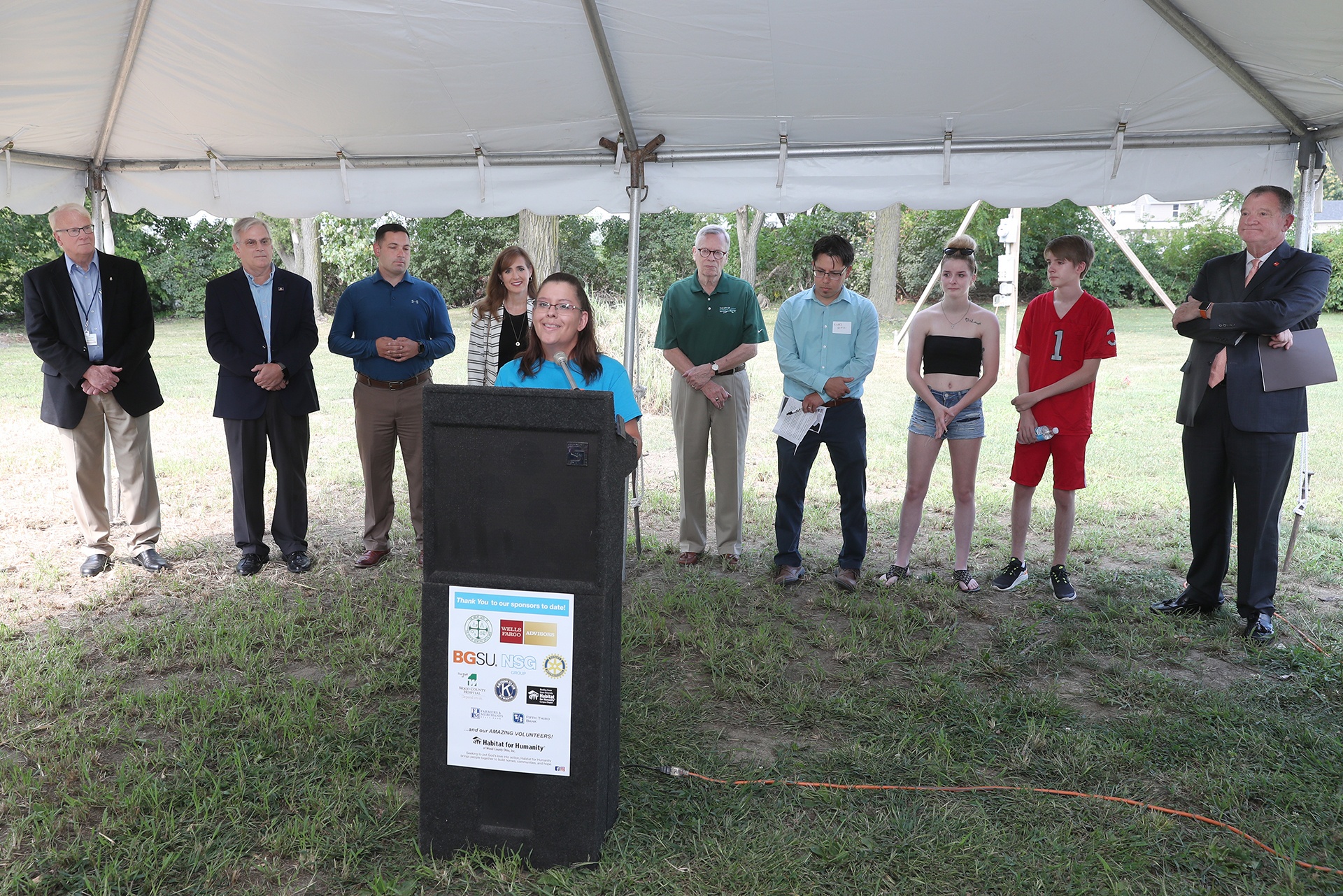 Future homeowner Amy Olea and her children were bathed in community support on the sunny morning of August 15 when a group gathered to break ground on the second Habitat for Humanity house in Bowling Green — a home that had long seemed only a dream, especially to Olea’s son, Ryan. Soon the site of the former water tower at Clough Street and Manville Avenue will boast two Habitat homes.

Olea spoke of the reminders she has that she is achieving her dream of becoming a homeowner and having a stable place for her family. She thinks of the smile on her face after the Habitat committee visited to tell her they had been selected, Ryan’s ongoing feeling of being in a dream since they learned they had been chosen and the tears of joy her daughter, Kerrie, shed upon hearing the news.

Thanking all those from Habitat and elsewhere who have helped, she said, “This is a blessing for me.”

As they had with the first Habitat house, BGSU students will be there to help with the build, the second in the “Build Three in BG” initiative.

“It should come as no surprise that the house will be so close to Bowling Green State University,” said Ohio Rep. Haraz Ghanbari (R., Bowling Green). “BGSU has been a true anchor in our community, investing in generations of students and people in the community. There’s always been a strong bond and collaboration.”

“This is a blessing for me.”

BGSU President Rodney Rogers welcomed the Olea family to the neighborhood and said the students’ participation in the Habitat build was an expression of what it means to be a public university for the public good.

“We’re happy to be able to leverage the power of our students to help someone in the community,” he said.

Paul Valdez, associate director of BGSU’s Center for Civic and Community Engagement, and Dr. Brett Holden, director of University learning communities, helped mobilize and coordinate the students who pitched in to help build the first house. They were on hand to congratulate the future homeowners and share in their happiness.

Habitat for Humanity Executive Director Mark Ohashi said Habitat believes everyone deserves decent and affordable housing and is based in the spirit of doing for others as you would like done for you. In that spirit, Olea worked on three other Habitat builds for other families, and now will work to build her own family’s home — what the organization calls “sweat equity.”

In addition to helping with other families’ homes, Habitat home owners must take responsibility for the low-interest mortgage on their house, said Cindy Fuller, a retired BGSU employee, homeowner selection committee member and former Habitat board member. They must have a consistent, stable income of some type and participate in a thorough process that involves education in home ownership and money management.

“They are full partners in their homes,” she said.