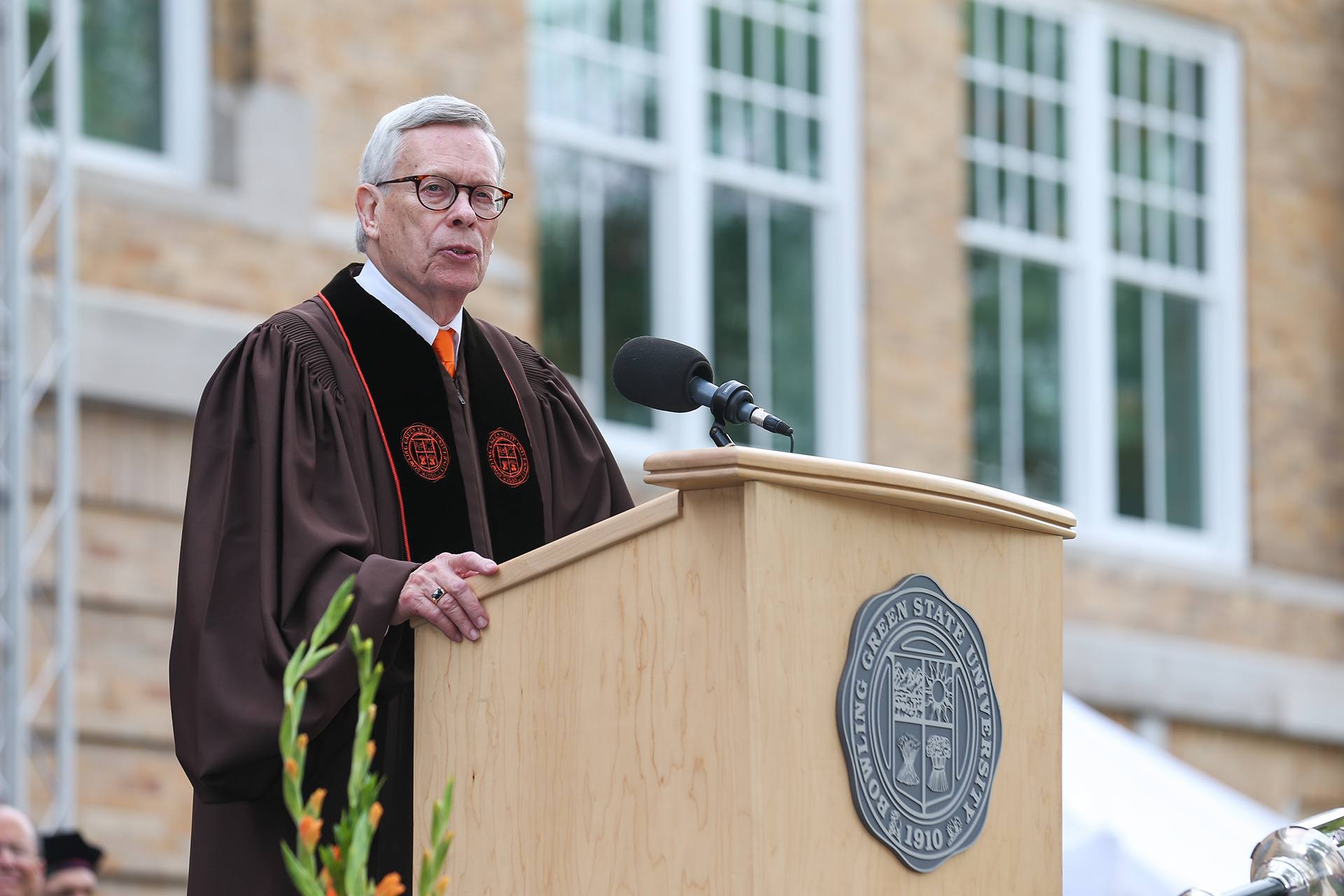 Bowling Green Mayor Richard Edwards addressed summer commencement graduates and their friends and families Aug. 17 on the historic lawn in the center of campus, now named the Bowen-Thompson Quadrangle.

"In a very real physical sense, this is where the BGSU story really began, beginning in 1910 and the first building in 1913," Edwards said. "And right from the start there was an inextricable, unmistakable linkage between the 'town and the gown.'"

Now in his second term as mayor, Edwards embodies those dual identities, having served BGSU as executive assistant to the president, vice president for University relations and adjunct journalism faculty member from 1971-84. After moving on to positions at Wright State University, East Carolina University and COSI in Columbus, he returned to Bowling Green as Wood County Administrator from 1994-2000. He was first elected mayor in 2012.

Before offering advice based on his years of experience to the graduating class, Edwards spoke a bit about his job and the history of the University.

"The life of a mayor in a university town is never dull or uninteresting," he said. "Often I find myself in the role of official greeter. So, for all of you out-of-towners, may I simply say, welcome to BG, one of the most energy-sustainable cities in Ohio."

Recounting the University's founders' efforts to make sure Bowling Green was chosen as the site of the new school to be established in northwest Ohio, "What we see and find in the BG of today is an affirmation of what was envisioned by those citizens and elected officials way back in the beginning. They 'moved mountains,' so to speak, and worked every political angle to give birth to the land of Ay Ziggy Zoomba.

"That's why my continuing enthusiasm for and belief in BGSU as a 'public university for the public good' is unbridled and unrestrained. That's why I wholeheartedly embrace the University's emphasis on diversity and inclusion, collaboration, creativity and excellence in our community. Good town-gown relations are an absolute must. It's imperative that we work together."

After his long and varied career, he offered the graduating class five short "life lessons" gained from his experiences, many good but some "bad and ugly."

First, he said, "Regardless of your professional journey and degrees and whether you will become a teacher, a health care specialist, a scientist or technologist, an accountant, a business executive or whatever, consider your audience and be considerate. Shape a message that is designed to elicit feedback. In short, practice Communication 160. Be empathetic. I applaud what is being demanded of today's physicians in training. Speak clearly and then listen to your patients."

Second, "Don't be afraid to take the 'road less traveled.' So many times over the years I have advised students to guard against what I often refer to as the 'blinder effect.' That is being too narrowly focused about a specific career track and thus missing and constraining other opportunities and challenges."

As the parent of three daughters with his wife of nearly 61 years, Nadine, Edwards said he has always loved learning from children's stories such as "Charlotte's Web" and from the teachings and writings of the late Fred Rogers, who was awarded an honorary doctorate from BGSU in the 1980s.

"One of my all-time favorites is a lesson taken from the 'gospel' of Winnie the Pooh. Consider, if you will, this bit of dialogue between Rabbit and Pooh from the 'House of Pooh Corner.'

"'I don't see much sense in that," said Rabbit. 'No,' said Pooh humbly, 'there isn't. But there was going to be when I began it. It's just that something happened to it on the way.'

"How often our intended pathways are diverted and, in retrospect, that's not entirely all bad. But most importantly, love what you do. Thank you, Fred Rogers."

Third, Edwards told the graduates, "Thanks to a reminder from my wife, I carry with me each and every day a quote from our 33rd U.S. President, Harry S. Truman. It's a simple but telling thought that works as follows: 'It's amazing what you can accomplish if you don't care who gets the credit.'

"It speaks for itself. Tuck in your ego."

Lesson four is to stay in shape. As a saxophonist, Edwards said, it means keeping your musical "chops" up, but in the larger sense it's to "age gracefully and actively. Prepare for the long run. Life is not a dash. How are you preparing yourself for a life well lived?"

He also reminded the audience to celebrate victories. "I was confronted with the horrible 'uglies' associated with cancer in 2001 and celebrated my remission a year later by walking more than 200 miles along the path of the River Thames from its source in England to near the North Sea with a Brit and BGSU grad, Class of 1968.

"The 'road of life' is often curvy, bumpy and fast, so prepare for the road ahead. In golf terminology, it's all right to 'play forward.' Just keep playing."

And last, he said, "Don't be afraid to unplug and hit the 'shut down' button on your computer. Give yourself a periodic holiday from all the noise in the environment, including the never-ending babble from Washington. Tune out, if even for 15 minutes a day. I embrace the theology of silence and a week ago I went an entire week at Ohio's Chautauqua, Lakeside, without viewing the TV. What a blessing."

Edwards closed with an expression in honor of his maternal grandparents, who immigrated to Cleveland from the Highlands of Scotland: Lang Mae Ye Lum Reek! (Long May Your Chimney Smoke.) "And, yes, long may you remember and cherish your association with Bowling Green State University. Honor your alma mater, its traditions and strengths as a university. Be an active alumnus. Be an active, informed member of your community."