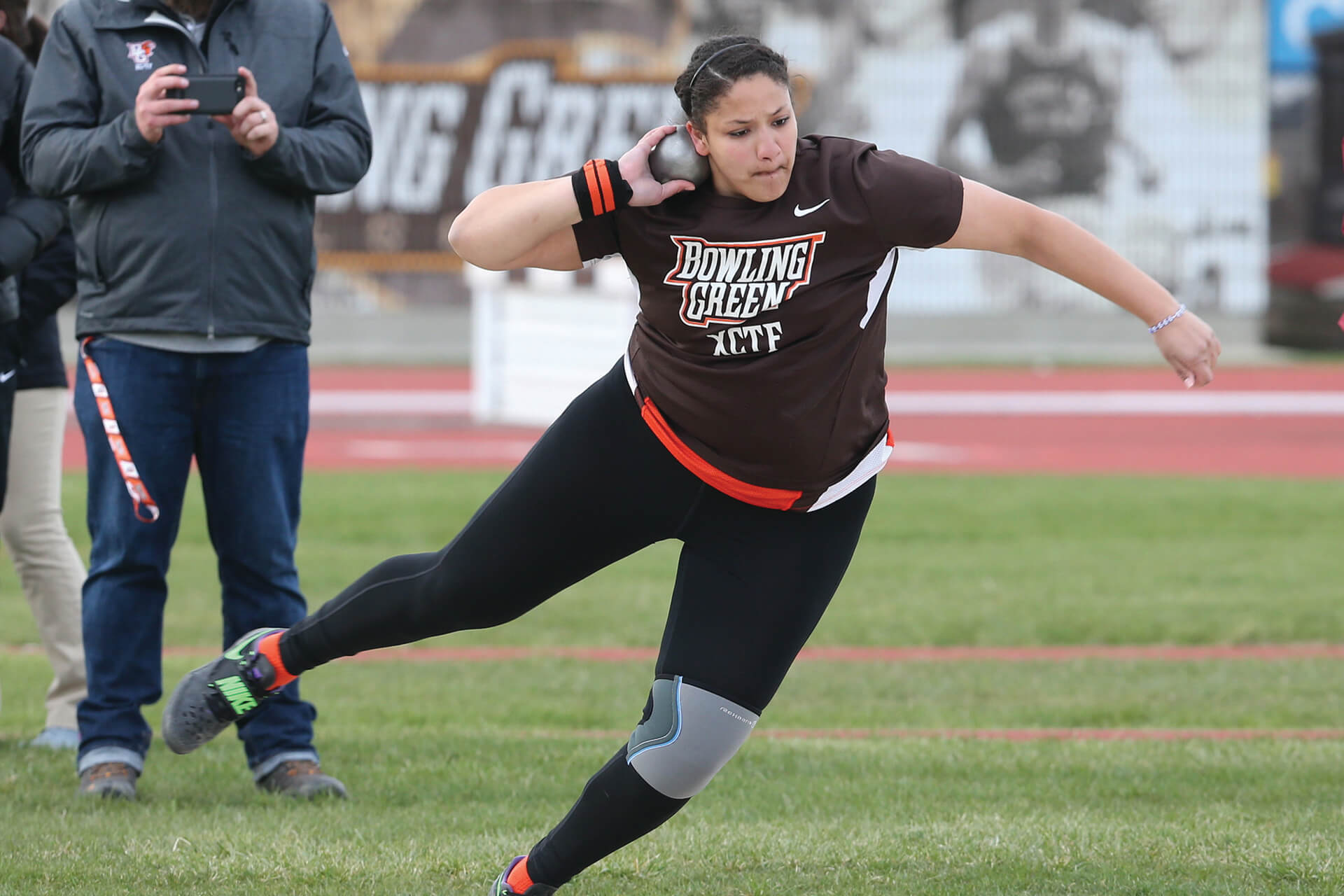 Perseverance pays off for All-American track and field star

Aliyah Gustafson ’17, ’19 has been instrumental in making BGSU one of the nation’s top places to compete in the hammer throw, shot put and discus. In fact, Bowling Green ranks as just one of two schools to be among the top 15 nationally in each of those three throws.

Gustafson is concluding one of the most impressive careers in BGSU Track and Field history, breaking the school record in the shot put multiple times and also scoring the top weight throw in program history. In addition, she ranks second in discus and third in hammer throw. She has won six MAC Championships and was a first-team All-American in the shot put during the 2019 indoor season.

On May 25, she competed at the NCAA East Region preliminary round at Hodges Stadium on the campus of the University of North Florida, using every opportunity she had to make a return trip to the NCAA Division I Outdoor Track and Field National Championships, for her fifth trip as a national qualifier. She threw the shot put 55-feet-3.5 (16.85m) on her third and final attempt.

She will join teammate Kaila Butler, a redshirt sophomore, at the National Championships in Austin, Texas, on Thursday, June 6. Bowling Green is the only MAC school to qualify a pair of throwers to nationals.

Gustafson has continued to build a long list of competitive successes throughout her career as a Falcon. But, according to Assistant Track and Field Coach Derrick Vicars, her positive impact on Falcon Athletics and the University community goes far beyond her accomplishments in the ring.

She placed second in the state in the shot put and fourth in the discus as a high school senior, getting the attention of BGSU’s Track and Field program. Thanks to the generosity of Falcon Club donors, Gustafson came to BGSU on an athletic scholarship.

After Gustafson was redshirted for the 2013-14 indoor and outdoor seasons, she began competing in 2014 but suffered a season-ending ACL injury. Her efforts and the expert support of BGSU’s Sport Medicine team in coming back to compete the following year led to a momentous turning point.

“Coming back to win my first outdoor MAC Championship in 2016 was certainly one of the most special moments in my career here,” recalled Gustafson. “I worked hard, was patient and trusted the process, and it just all came together. It was a big blessing for me in terms of patience and taking every opportunity to maximize the situation.”

It was a life-changing lesson that has informed her approach to both athletic competition and her academic career at BGSU.

Bowling Green is the only MAC school to qualify a pair of throwers to nationals.

According to her academic advisor, Dr. Lynn Darby, a professor in the School of Human Movement, Sport and Leisure Studies (HMSLS), Gustafson has truly excelled on the field and in the classroom while remaining empathetic and kind to others through all of her awards and recognitions.

“Aliyah has exemplified the true meaning of student-athlete,” Darby  said. “Her performances have been outstanding, both academically and athletically in her undergraduate as well as graduate studies, all while training and competing. What sets Aliyah apart from others is how humble and unassuming she is about her talents and accomplishments.”

Gustafson has earned her Master of Education degree with a specialization in kinesiology through HMSLS in the College of Education and Human Development. Cardiac rehab is her key area of interest, and she plans to work with individuals who have had some sort of heart event. But before she moves forward with her vocation, she has some unfinished business with her passion in sport.

After this month’s NCAA Outdoor National Championships, Gustafson plans to stay in Bowling Green and train for the USA Track & Field Outdoor Championships, which will be held in her home state of Iowa at the end of July. Beyond that, her plans to continue competing are uncertain.

“I haven’t decided if I’m going to train all the way through the Olympic trials,” Gustafson said. “That’s coming up next year and would involve the top 24 in the country, so I would have to keep training and drilling to be a part of that.”

For now, Gustafson’s focus is on the more immediate post-season competition. She is deeply appreciative of all the support she has received from her coaches, instructors and advisers, along with the broader community.

“For me, the sense of community coming here and being a part of something bigger than myself has had the largest and most positive impact,” she said. “I know that I have a lot of people behind me, whether that be on the athletic side, academic side or as part of this great community. The people here in BG really care … they want us to be the best and are definitely rooting for us whether they know us or not.”

Gustafson wanted to express special thanks to Darby for her assistance throughout her academic career and especially for helping facilitate her master’s project. And, of course, she appreciates the superlative work of Vicars, who helped her to “build my confidence and showed me how to get to that next level I’ve always strived for.”

According to Vicars, that level of accomplishment will stand the test of time: “Aliyah has set the standard for every present and future BGSU Track and Field athlete, and I couldn’t be prouder of the legacy that she will leave behind!”