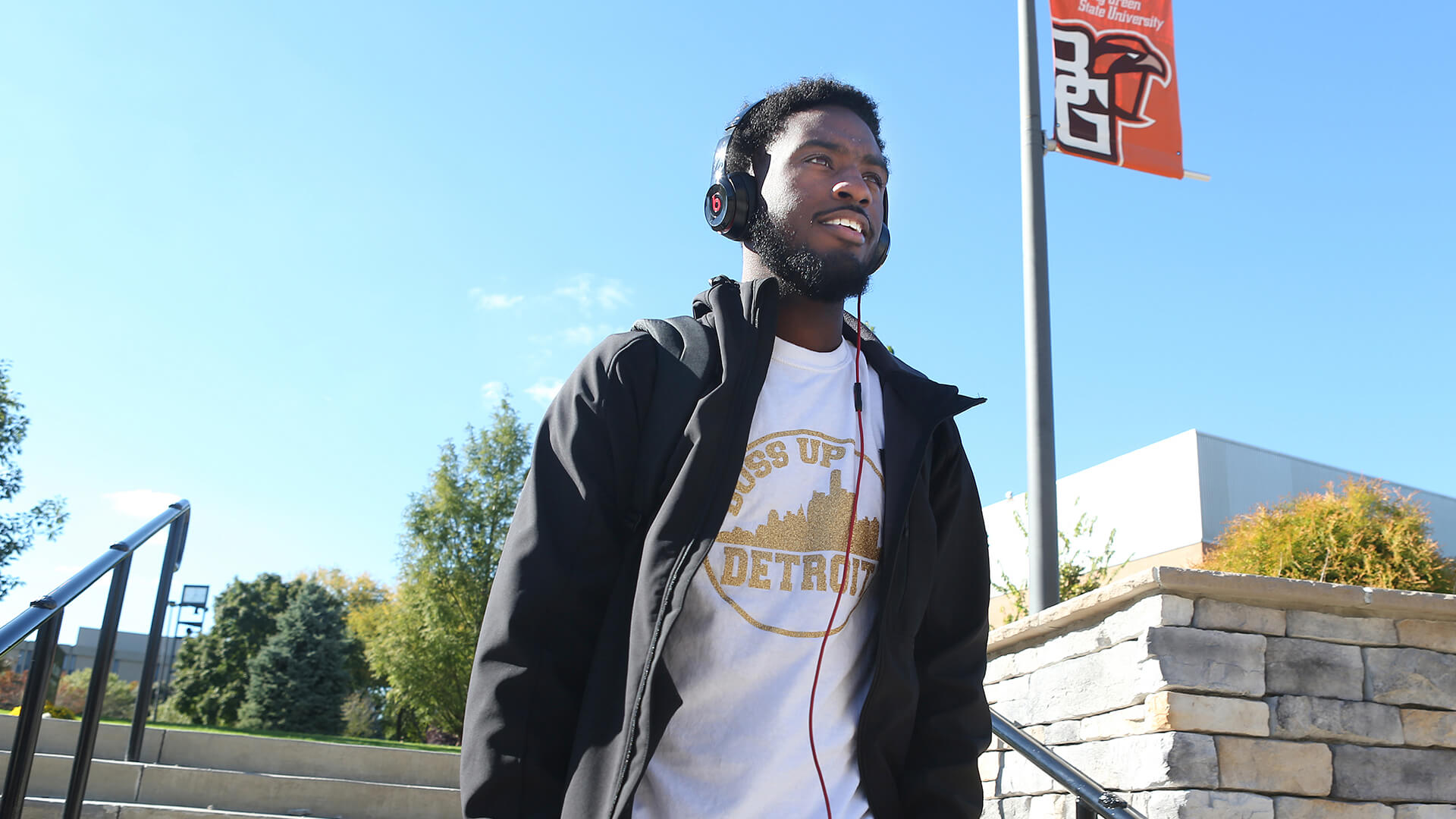 Jauntez Bates is a servant leader

Jauntez Bates is ready to return to his hometown of Detroit and give back to the community that means so much to him.

The Bowling Green State University College of Arts and Sciences August 2018 graduate will take his political science major and sociology minor to work in youth development in the city that defines him in many ways.

He is deeply dedicated to cultivating a culture and community that supports young people, especially young black males. Bates knows all too well how easy it is to slip through the cracks and head down a path that is not productive.

He was in that negative space for a while, but with the help of some positive and supportive influencers, he persevered and came away from his BGSU experience as a young man with focus, determination and vision. 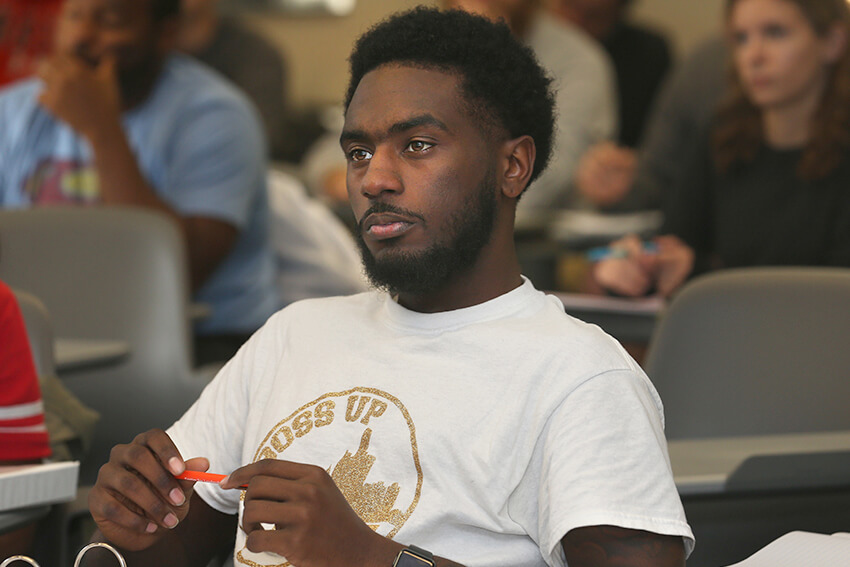 At the core of his support is family. His mother, who was a single mom, sacrificed a lot by working several jobs to support her family. Because of her work schedule, his great-grandparents raised him during his early years and taught him about love, compassion, faith and the value of a strong work ethic.

“My great-grandparents came to Detroit from Arkansas with 13 children. My great-grandfather had a bricklaying company and showed me the value of hard work; and my great-grandmother was a nurse, a chef and was always full of love and compassion,” Bates said.

“All along I’ve had people who prayed for me and did everything they could to provide a lifestyle for me before they passed away,” he said, “How could I not do everything possible to reciprocate the love they showed me by working hard and striving to succeed?

“That’s a strong conviction and I’m going to keep it, even though it has been hard."

He was shuffled around to other relatives after his great-grandparents died and found himself in a rough patch, afraid that people in his life were temporary, and believing that he wasn’t smart. He was given the opportunity to attend the University Preparatory High School in Detroit, where he had an adviser who “channeled a place of understanding and challenged me to control my thinking and feel more confident.”

Serendipitously, the donors who gave him the opportunity to attend the University Preparatory High School were the same donors who helped him four years later to be able to attend Bowling Green State University. BGSU Alumni Robert ’55 and Ellen ’54 Thompson decision to support Detroit area schools put him on a good path in high school. Little did he know when he met the Thompsons at his high school that they would be a force in his life again. Their support of the BGSU President's Leadership Academy (PLA) provided the key to him attending BGSU, a university he wasn’t familiar with until a PLA pamphlet landed in his hands, offering full tuition and room and board to promising young leaders. 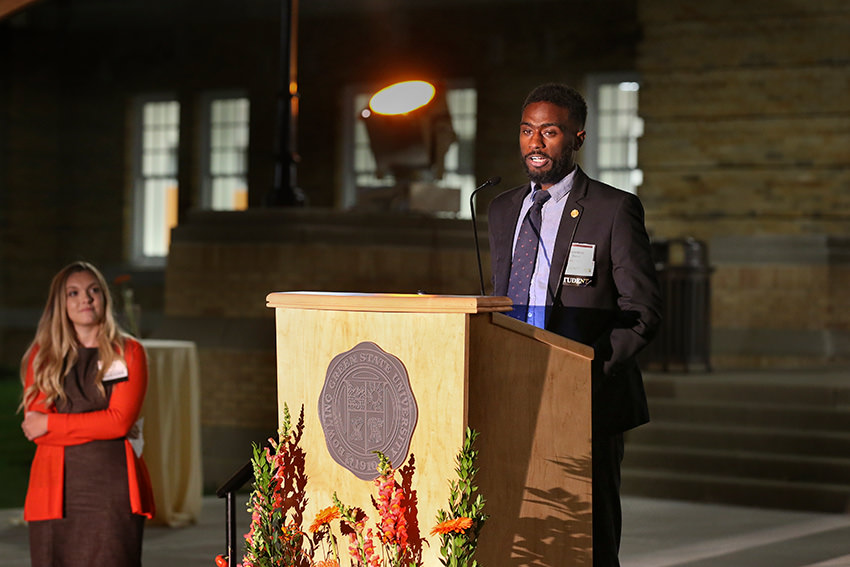 The 2014 PLA cohort, which is the first cohort to boast 100 percent retention of its members, gave him a strong foundation. He admitted he got off to a rocky start, but decided he was not going to be a statistic — a black male who doesn’t finish his degree. Right away, Bates became active in the Black Student Union, serving as public relations chair and then as president. His goal was to generate as much change as possible. He stood up for the black perspective and proved his leadership by participating in many organizations and activities across campus and the community.

He was a Student Leadership Assistant in the Center for Leadership, where he learned to facilitate workshops and conversations rooted in inclusion, purpose, global citizenship and integrity. He and two of his colleagues — Brendan Foulks and Dion Brooks — started a clothing line, #BossUpClothing,  as a way to make some money, but also to help them make connections and build relationships.

“Being student leaders on campus enabled us to be strategic in our advertising,” he said.

In 2017, Bates was elected vice president of the Undergraduate Student Government (USG), which increased his visibility and participation in such committee as the USG Drug and Alcohol Task Force and the University Task Force on Sexual Assault. He was proud to have been an active participant in those committees that had significant impact on campus.

Last summer, he interned in the Office of the Detroit mayor, and this summer he was accepted into the Detroit Technology Exchange, designed for students and recent graduates to explore entrepreneurial potential.

His active participation in and exemplary contributions to the black and campus community earned him the Black Excellence Award, presented at the Black Issues Conference. He also was a valued member of the National Pan-Hellenic Council and his fraternity Omega Psi Phi.

Walking across the stage at commencement will be a significant validation of the effort he has put in during the past four years.

“This is a special award that I dedicate to my mother and my family members who assisted along the way,” Bates said.

And as he does he admits, “I am fully aware if not for the Thompsons, I wouldn’t be here.”

He wants his legacy to be servant leader, much like the Detroit area couple who are known as generous benefactors to many important programs.

“That motivates me to want to go back and be a force in my community like the Thompsons were in Detroit.”