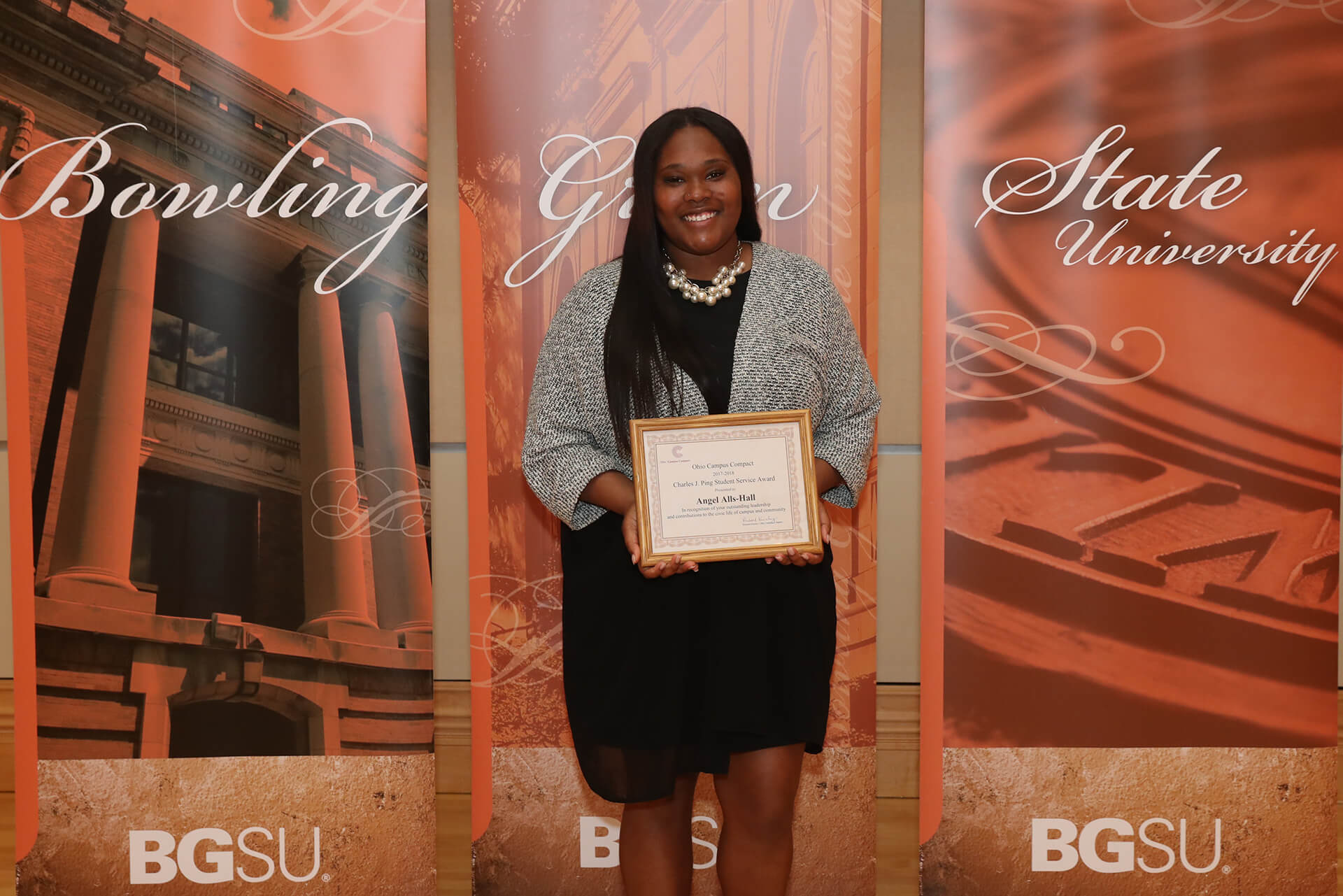 Wherever she is and whatever she’s doing, Angel Alls-Hall is engaged and assisting her community.

A senior Honors College student majoring in international business, Alls-Hall has served as a Bowling Green State University Civic Action Leader for the past three years, connecting thousands of students to community partners and helping make it possible for them to serve their communities and develop their civic skills, knowledge and values.

Alls-Hall was one of 12 Ohio students selected this year as recipients of the annual Charles J. Ping Student Service Award. The award recognizes and honors outstanding leadership and contributions to community service or service-learning on students’ campuses and within their communities. It is given by Ohio Campus Compact, part of a national organization committed to furthering the civic purposes of higher education, and identifies recipients as examples of civic leadership.

“These students represent the next generation of civic leaders and problem solvers,” the announcement of the winners said. The award is named in honor of Charles J. Ping, who served as president of Ohio University from 1975-94. An early supporter and board member of Ohio Campus Compact, Ping has been a tireless advocate for campus-community partnerships and increased opportunities for students to become active and engaged citizens.

She was nominated by BGSU President Rogers Rogers, with support from the Center for Civic and Community Engagement, home of the Civic Actions Leaders program.

“Whether as a Civic Action Leader, the community service chair for her academic fraternity, or as a committed volunteer in her home community of Detroit, Angel has been an active student leader, an excellent mobilizer, and she has helped BGSU build more capacity for community engagement,” Rogers said.

Although the Civic Action Leaders’ behind-the-scenes work often goes unrecognized, it is “crucial for creating a positive campus culture of community engagement,” Rogers said. “Angel has worked tirelessly to expand her knowledge about critical community issues and has developed multiple processes to help streamline and make community engagement opportunities easy for students and faculty members to pursue.”

Alls-Hall provided insight into the need for deeper engagement on the part of students volunteering in community service. She improved the retention and participation of site leaders for the annual Martin Luther King Day of Service Challenge by overhauling the training process and involving them more in the overall coordination of the event, creating better-trained and more highly committed student leaders.

“Angel is an outstanding example of a student who cares deeply about others and takes initiative to put those values into action,” Rogers said. “Student leaders such as Angel help to build strong community connections and demonstrate the power of colleges and universities to contribute to the vitality of our communities.”