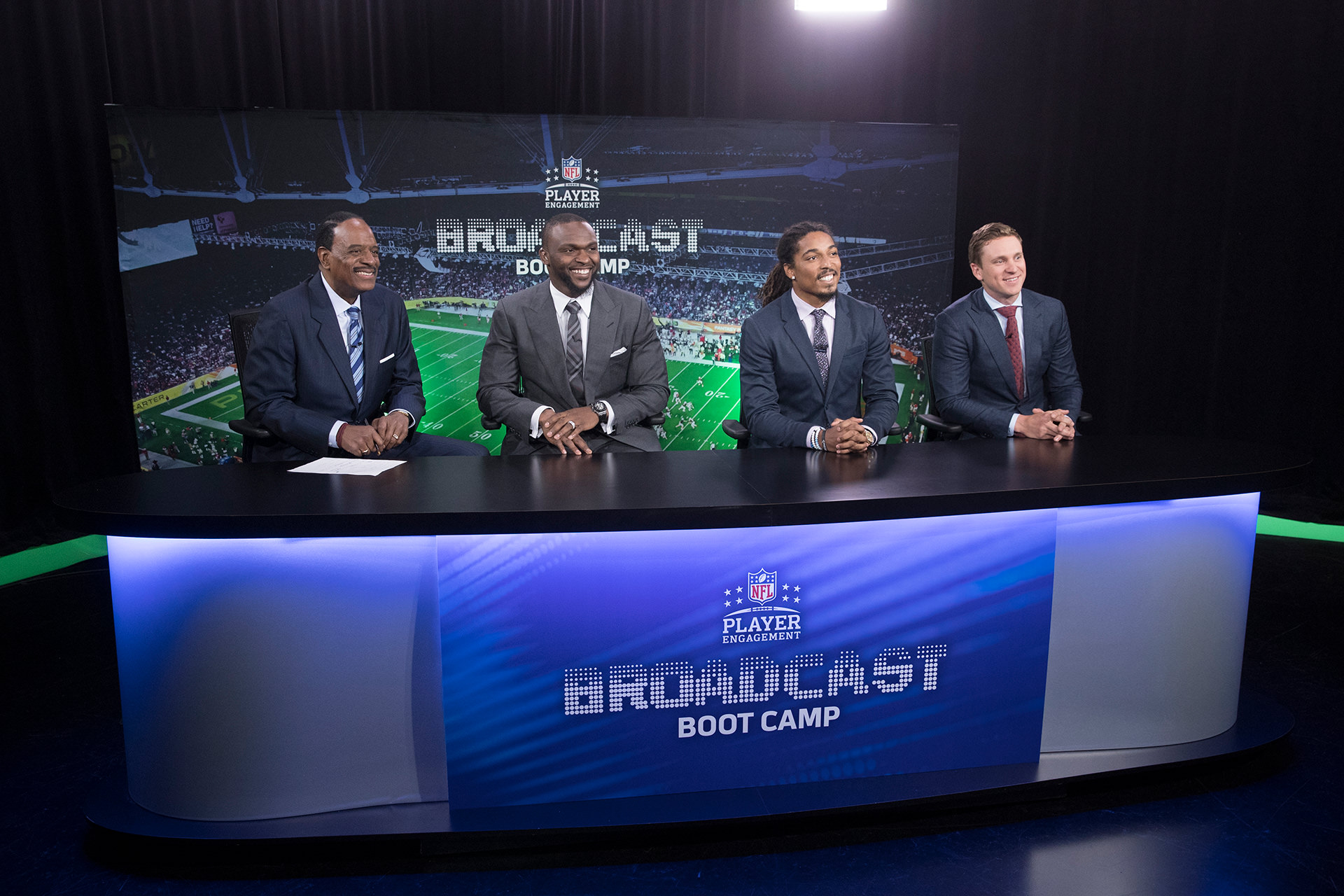 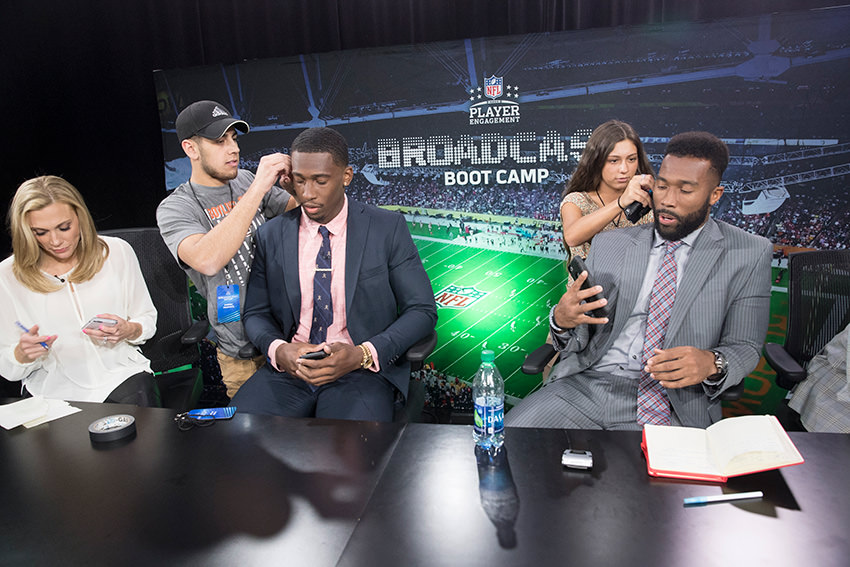 Bowling Green State University played host to the NFL's 12th annual Broadcast Boot Camp from April 9-11. There were 35 participants from the NFL, including 14 current players, who took part in a program that focused on show preparation, radio production and field reporting.

Until this year, the broadcast boot camp had been held at NFL Films in New Jersey. BGSU, which had hosted the Sports Media NFL Boot Camp for the past five years, was well suited to step in and host the long-running educational program.

"In January, when we were informed that NFL Films could not host this year's NFL Broadcast Boot Camp, those of us associated with the program considered several options for 2018," said Dick Maxwell, who coordinated the event. "It didn't talk long to recognize that BGSU could provide a turn-key support system we certainly needed. However, the over-riding factor in deciding on BGSU was the Kuhlin Center. It simply offers the latest in broadcast media facilities just about anywhere. Kuhlin, BGSU's home of the School of Media and Communication, combines the perfect balance between a teaching and a practice environment."

Maxwell, a 1970 alumnus of BGSU, worked for the NFL for 36 years, including 29 seasons in the league office, and was the NFL's senior director of broadcasting when he retired in 2006. He founded the Maxwell Center for Sports Media at BGSU to assist students in the sport management and media and communication programs.

James Brown, the studio host of “The NFL Today” on CBS Sports, has hosted the event every year since its inception. He told the players to take full advantage of the media panelists, who included BGSU executive-in-residence Jay Crawford ’87 and University faculty who were at the camp to offer guidance as the players embark on broadcast careers.

“The NFL has done a sensational job in pooling together all their partners: radio, TV and audio,” Brown said. “What does it take to get into the business? I stress character and integrity being the foundation of whatever they do. Look, they bring insight of all those years having played and they know what hard work is all about. They get all of that; it’s not new to them. In a studio show, the players help me to understand by giving me insight into a given game or the game as a whole, so they are great ambassadors for the game of football.” 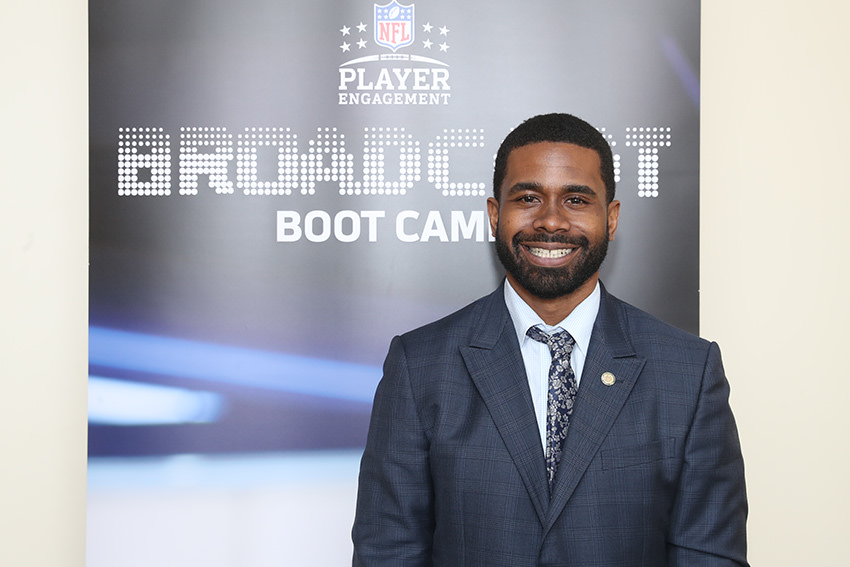 One of the players at the camp was Toledo native Nate Washington, who starred with the Pittsburgh Steelers while playing for two Super Bowl-winning teams.

“We’ve had 45-minute breakout sessions, and each one of those sessions particularly pertains to an aspect of media, whether that’s podcasts, broadcasting, radio, social media, terminology — we’ve been learning every aspect of the media in those sessions,” said Washington, who was a record-setting receiver at nearby Tiffin University. “I played football for so long that’s it’s second nature to me. I thought I could just go and tell someone about the game, but, honestly, to come in here and understand the whole aspect of the media side of football has been very important for me.

“I think the things I did in my career kind of speak for themselves, but at the same time I don’t want my experience to be the only reason why I build a career in the media.”

Brown was impressed with what BGSU had to offer the players during the camp, both in facilities and faculty advisers.

“This is the premier professional broadcast camp in all of sports, bar none,” said Brown, who has been a sportscaster for more than 30 years. “This is the standard by which all others are measured. Dick Maxwell was able to make it happen at BGSU. The television studio is perfectly situated with state-of-the-art equipment and with enough rooms set up that the players can go into a room right off of the main studio for critique purposes. The guys get immediate feedback with the monitors to see what they can do better. BGSU is a perfect place to hold this boot camp.”

Not only does the camp offer broadcasting talent from Westwood One radio, Fox Sports, CBS, ABC and ESPN, Brown said, but BGSU has an additional element the players can’t get elsewhere: academic experts.

“Even a dinosaur like me, I’m sitting there listening to Dr. Rentner’s presentation on social media, and I’m like, ‘I’ve got to do it,’” Brown said. “That academic layer at BGSU has only augmented what the guys are hearing.”

Rentner sees a future for many of the players who attended the camp.

“In addition to teaching players the skills they need to succeed in sports broadcasting, we help them develop their brand,” she said. “We encourage them to really show their personality, coupled with the expertise they bring to the booth as NFL players. They come prepared to work hard, and we don't disappoint. The camp provides an excellent balance of classroom preparation and hands-on learning.

“It won’t be long before you'll hear many of these players on radio or see them on TV.”

Liggett is proud that the NFL event returns to BGSU year after year.

“I’m fortunate that this was my sixth year of involvement in the NFL Boot Camp at BGSU,” Liggett said.  “Something that always impresses me is how well its coordinated and produced by the people who work for the NFL Player Engagement division as well as our own Conference and Event Services staff. All those involved make it a highly professional and memorable experience for both the players and faculty.” 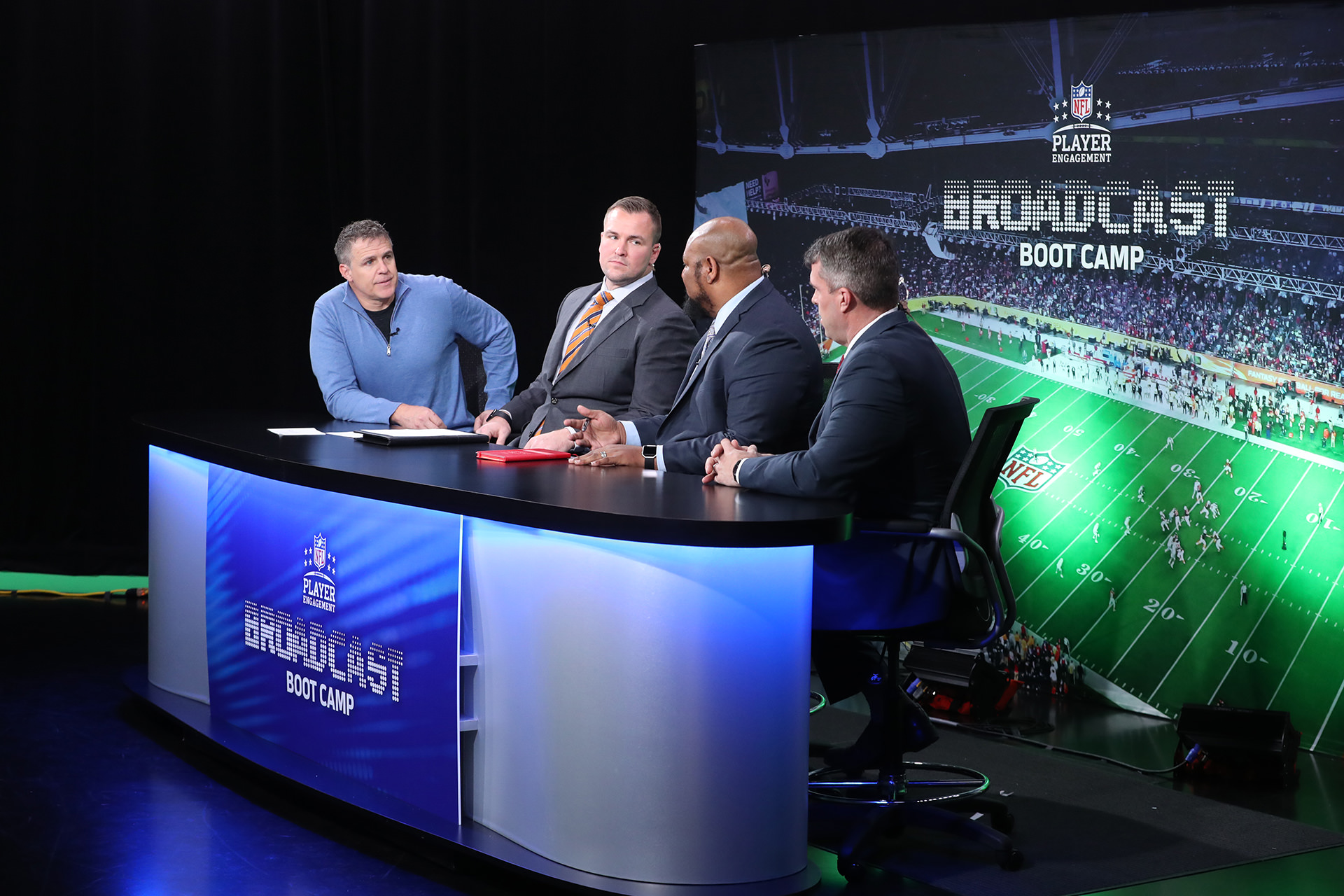