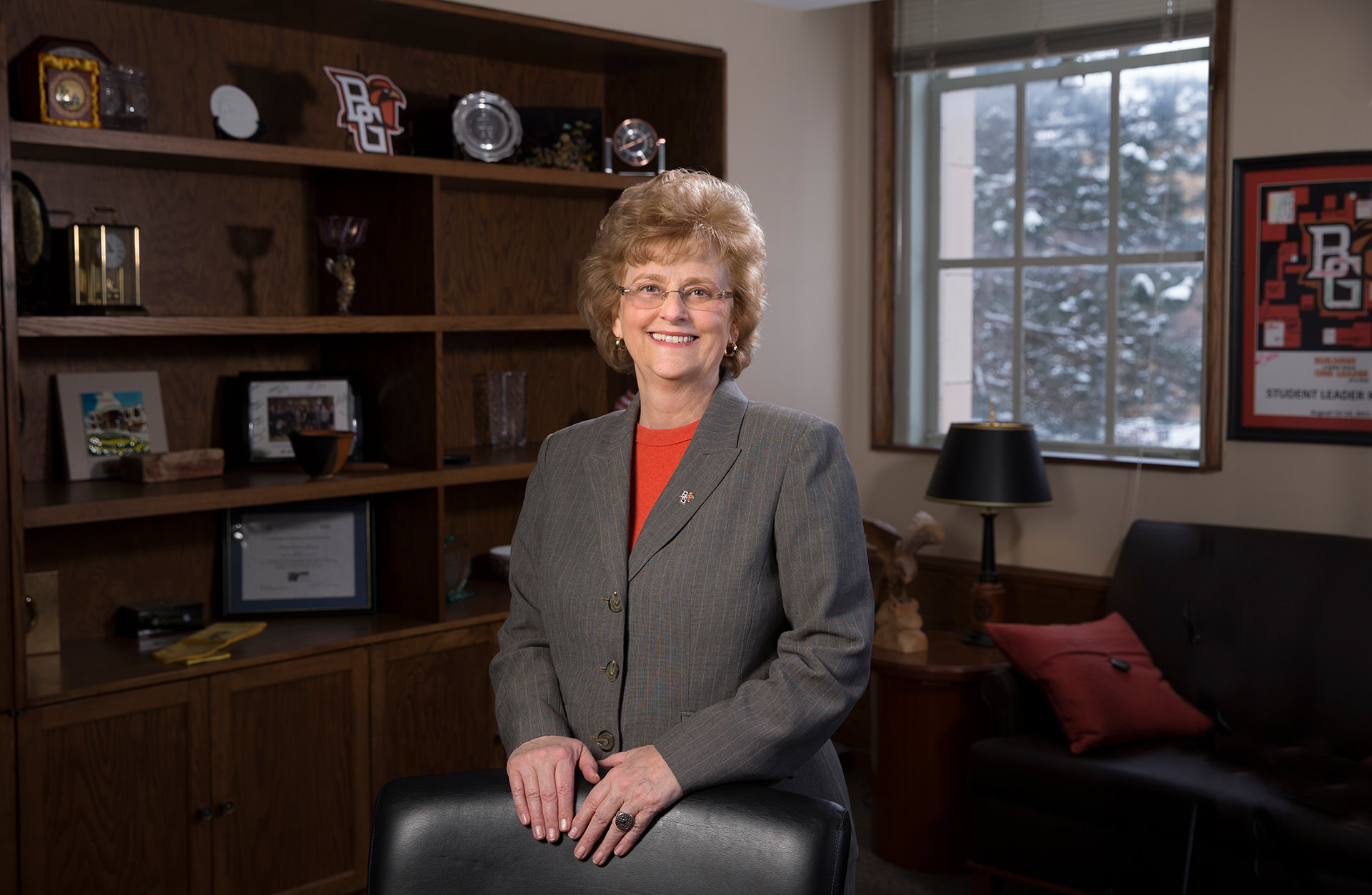 President announces her next chapter

Bowling Green State University President Mary Ellen Mazey has announced that she will be stepping down as president on Dec. 31. She will continue to assist with the University's comprehensive fundraising campaign and help with the transition to her successor.

"It's been an absolute joy to lead this great University. I'll be watching with interest to see what's next for BGSU," Mazey said. "While I look forward to this new chapter of my life, I will miss the members of our University family, especially our students. They will always be in my heart."

According to Megan Newlove, chair of the University's Board of Trustees, BGSU underwent a renaissance during President Mazey's tenure.

"Dr. Mazey has been an outstanding leader," Newlove said. "Thanks to her passion and vision we've made tremendous progress across the University. Enrollment has grown. Our classrooms and facilities have improved. Private funding has increased. She has expanded and strengthened our community partnerships, raised our global and national profile, and greatly improved student and alumni engagement. She leaves BGSU a far better place."

In recognition of her contributions to the University, the Board of Trustees voted to grant her the title of President Emeritus at its Dec. 8 board meeting.

During her tenure at BGSU, enrollment climbed significantly along with the academic profile of the student body. This fall, the University welcomed the best academically prepared class in its history for the fifth year in a row and student four-year graduation rates improved to record levels.

"President Mazey often talks about developing and nurturing a spirit of innovation. She has instilled that at Bowling Green through her leadership," said Dr. Rodney Rogers, provost and senior vice president. "Over the past six years we've introduced new academic programs like forensic science, software engineering and mechatronics. We've launched unique initiatives like the Falcon Internship Guarantee to ensure our students gain critical experience through internships and co-ops. And we've also enhanced our research efforts with significant gains in external funding. The spirit of innovation will be her legacy."

As president, Mazey oversaw more than $500 million in infrastructure improvements on the University's two campuses – the largest building and renovation program in BGSU history.

The capital improvements included significant investments made by private companies and other public entities through innovative partnerships with the University. Partnerships with Wood County Hospital, North Star Aviation and the Ohio Attorney General's Office resulted in the Falcon Health Center, the Falcon Flight Center for aviation, and the Ohio Bureau of Criminal Investigation's on-campus crime lab.

"That kind of out-of-the box thinking and partnership development is a hallmark of Mary Ellen's leadership," said David Levey, former chair of the Board of Trustees. "She is all about collaboration and finding new ways to fund facilities and programs to better serve our students."

Another critical initiative launched under Mazey's tenure is the Changing Lives for the World Campaign. The University's comprehensive fundraising campaign has four priorities: scholarships to support students in all majors, endowed faculty and staff positions to recruit and retain outstanding educators and coaches, creating state-of-the-art facilities, and named academic programs and units. To date the campaign has raised $110 million of its $200 million goal.

"Dr. Mazey has been a tireless fundraiser and has re-energized and re-engaged our alumni," said Mike Kuhlin, a donor and chair-elect of the BGSU Foundation Board. "Our donors have seen her passion for our students and the University, and that has made all the difference in the world. We'll be forever grateful for her leadership. The leadership team that she has put in place will continue to build on her successes."

For students, Mazey may be best remembered for her commitment to their success. More students than ever are engaging in important activities like undergraduate research, learning communities and study abroad.

"President Mazey has been a tremendous role model and mentor to me. She cares deeply for our students," said senior Meg Burrell, a former student trustee. "I will never forget the impact she has had on me and our campus."

The Board of Trustees announced that it has named Rogers interim president. The board expects to begin the search process to recruit BGSU's 12th president this spring.

"Dr. Mazey leaves behind a strong leadership team that she assembled," Newlove said. "Thanks to those efforts, the University is well positioned to continue moving forward and building upon her legacy."