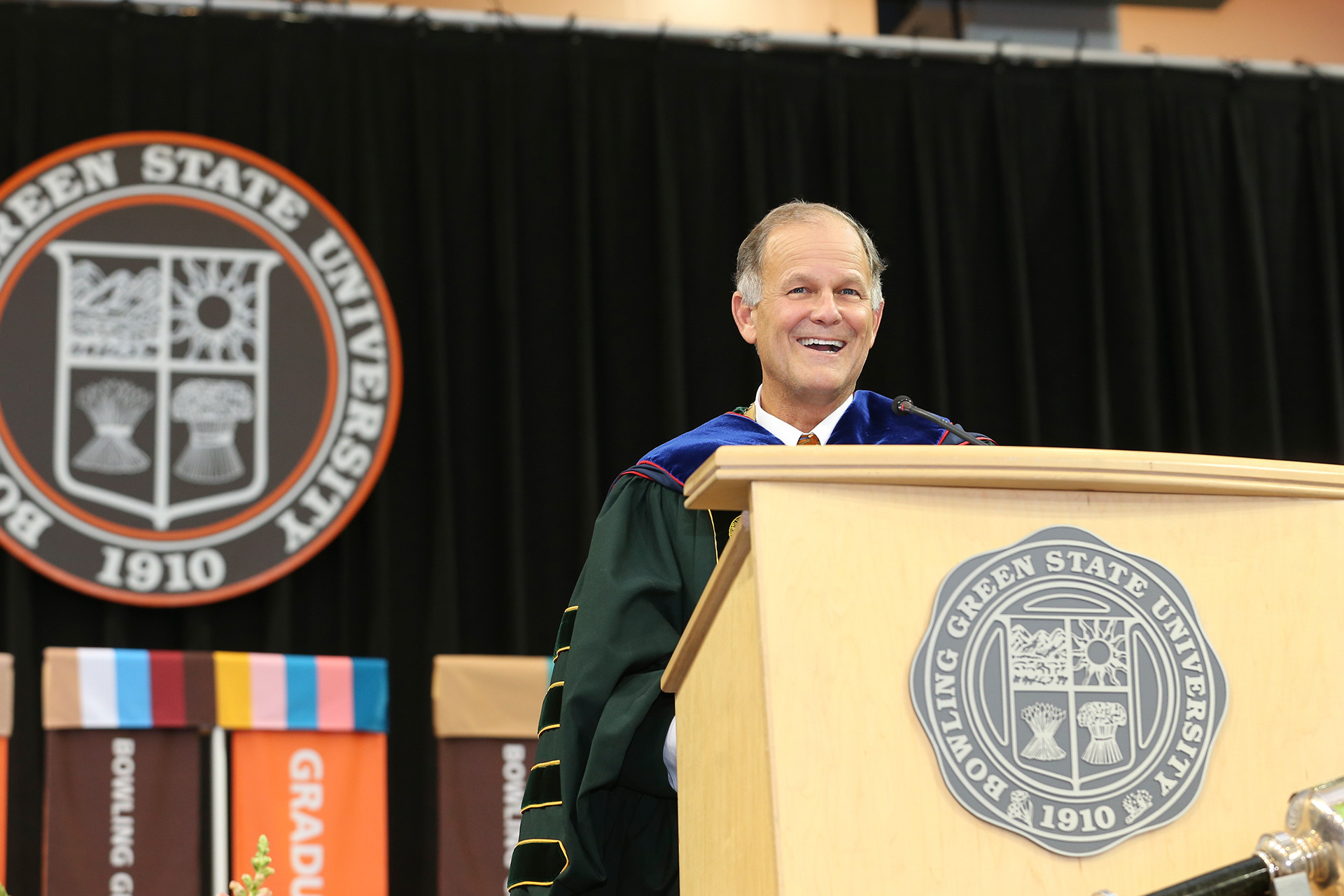 BGSU was a launching pad for university president

When Dr. Dean Bresciani graduated from Bowling Green State University 31 years ago, he never imagined that one day he would be giving a commencement speech to a new class of Falcon alumni. But on May 6, the 14th president of North Dakota State University (NDSU) had the opportunity to do just that.

“Bowling Green has been a big part of preparing me for the opportunity to work in higher education my entire career, now as the president of a top-100 ranked research university,” he told graduates. “The 30-second version of my words today are to, just for a minute, stop and think about the launching pad this place can be for you.”

Bresciani received a Master of Arts degree in college student personnel from BGSU in 1985; he then received his doctorate in higher education finance from the University of Arizona. Graduates from the Graduate College and the colleges of Health and Human Services; Musical Arts; and Technology, Architecture and Applied Engineering were in attendance Friday as he shared memories of Bowling Green – including the National Tractor Pulling Championships, fireflies and hockey.

“BGSU is the perfect balance,” he said. “Small enough to be comfortable, but big enough to give you opportunities. It’s a wonderful niche students have fallen into by coming here.”

He remembers the passion faculty and staff had for what they were teaching and learning, sharing that the intense academic environment, balanced with the collegiate environment, was inspiring.

“You may not know it, but you have been given, accepted and benefited from a gift that will grow with time and become one of the most important things that will ever happen to you for the rest of your life. … You have been given the gift of knowledge.”

“Being back, I see so much that is the same and so much that is different,” he said, recalling how he would sit on the steps outside the Education Building, talking with other students while waiting for classes to start. “I’m still in touch with those classmates today.”

He also shared words of advice.

“I want to share with you something I might not have fully grasped as I sat in your seats some 30 years ago,” he said. “You may not know it, but you have been given, accepted and benefited from a gift that will grow with time and become one of the most important things that will ever happen to you for the rest of your life. … You have been given the gift of knowledge.”

He called knowledge a competitive advantage that very few people in the world have.

He then advised graduates to apply their knowledge to productive ends, focusing on what impacts the quality of their lives and the lives of those around them. Part of this, he said, is to be the most thoughtful – not the first – before saying or doing something.

Bresciani closed his speech by talking to the students about integrity.

A native of Napa Valley, Calif., Bresciani is known for his dedication to students and advancement of scholarly activities, as well as being well regarded for his thoughtfulness, energy and integrity. He brings to NDSU the knowledge and experience of more than 30 years in higher education and has developed a broad leadership base in the academic, administrative and political aspects of university leadership. Before joining NDSU, he held a vice president role at Texas A&M University from 2004 to 2008, and was a full professor there in the Department of Educational Administration through 2010. He served in similar roles at the University of North Carolina at Chapel Hill from 1998 to 2004.