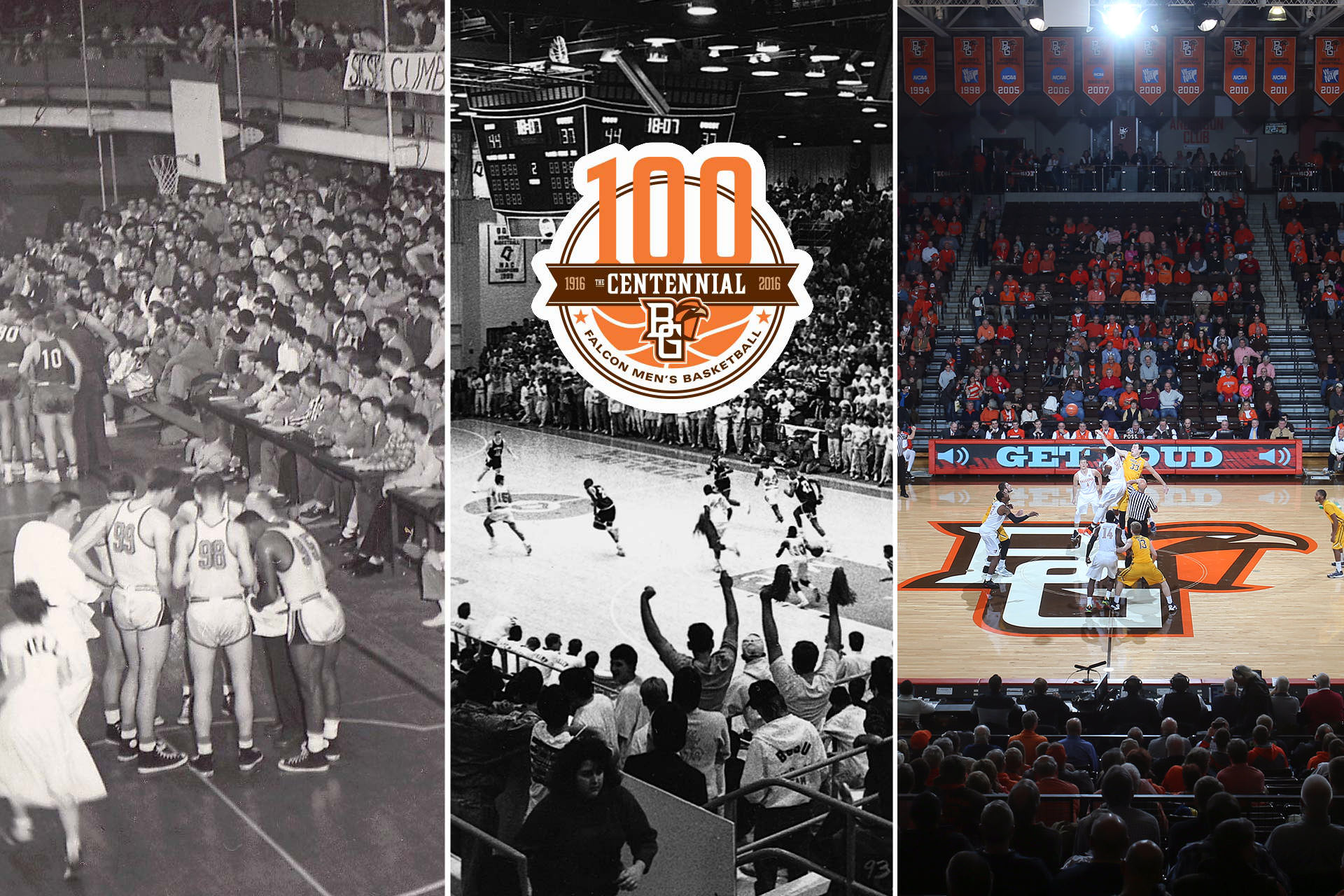 A century on the court

Excerpted from a series by Kevin Davis

The 2015-16 season marks the 100th year of intercollegiate men’s basketball in Bowling Green. As we continue to celebrate this landmark during the second half of conference play, we take this opportunity to remember the outstanding coaches, players and fans who have made Falcon Basketball great through the years.

The following is excerpted from a series of articles that the Department of Athletics published earlier in the season. Links to the unabridged articles — organized by decade — are included for those who are interested in greater detail. 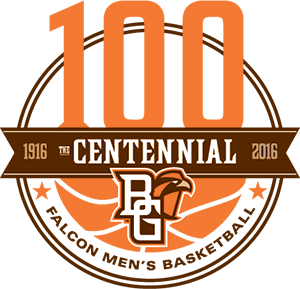 Sponsoring a men's basketball team for the first time in 1915-16, Bowling Green Normal College played its first game on Jan. 8, 1916, versus what is now Eastern Michigan University. The Normals, or Teachers — the Falcons' nickname until 1927 — lost the game 33-15. However, BGSU, who was coached by F.G. Beyerman and led by team captain Charles Branigan, would go on to win its first home game five days later on Jan. 13 with a 26-10 win over Defiance. The Normals or Teachers went on to go 3-8 overall in that inaugural season.

BGSU Hall of Famers from this era include Claitus Stough and Carl Bachman, who played from 1922-25. Bachman earned 13 varsity letters across five sports. 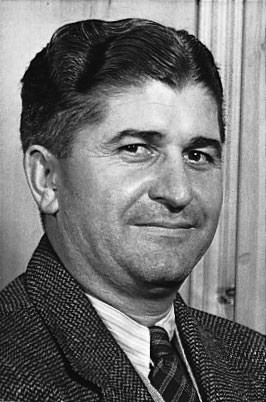 The second decade of men's basketball saw one big change during the 10-year period, as the Normals or Teachers changed their nickname to the Falcons in 1927. Ivan Lake (Class of 1923) suggested the nickname after reading an article on falconry. Lake, the managing editor and sports editor of the Sentinel-Tribune in Bowling Green at the time, proposed the name change because it fit headline space and because falcons were "the most powerful bird for their size and often attacked birds two or three times their size."

The period from 1925-35 on the court was one of consistency as Paul Landis took over the program in the 1925-26 season. He remained at the helm of the program for the next 17 years. BGSU registered six winning seasons from 1925-35 and tallied double digit wins four times, including a program-high 12 wins in 1926-27.

The era also saw a number of future BGSU Hall of Famers take the court in Howard Filiere, John Hartman, Fred Marsh, Hayden Olds, Doyt Perry and Frankin Skibbie. Coach Landis wrapped up his time on the sidelines in 1941-42 and was inducted into the BGSU Hall of Fame in 1966. 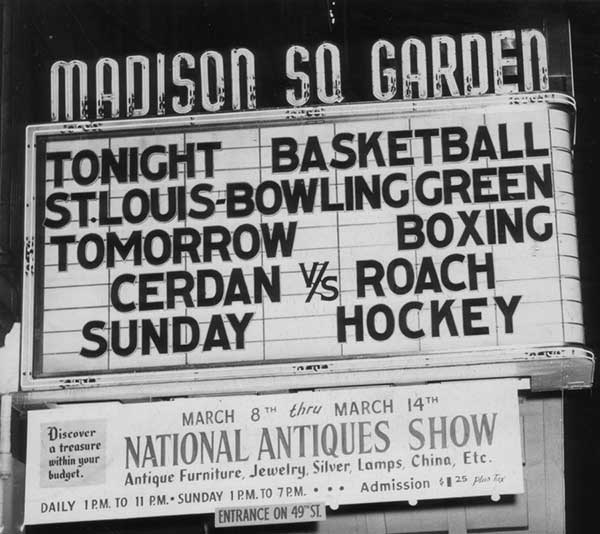 The 1935-45 decade of BGSU men's basketball was an era of firsts for the Falcons. BGSU made its first national postseason appearance in the National Invitation Tournament (NIT) in 1943-44 and then again in 1944-45, while the Falcons' also had their first ever All-American in Wyndol Gray in 1944-45. Gray was inducted into the BGSU Hall of Fame in 1964.

The men's basketball program also had a transition on the sidelines with two of the winningest coaches in BGSU history, as Landis gave way to Harold Anderson in 1942-43. Anderson posted a record of 18-5 over his first season at the helm. 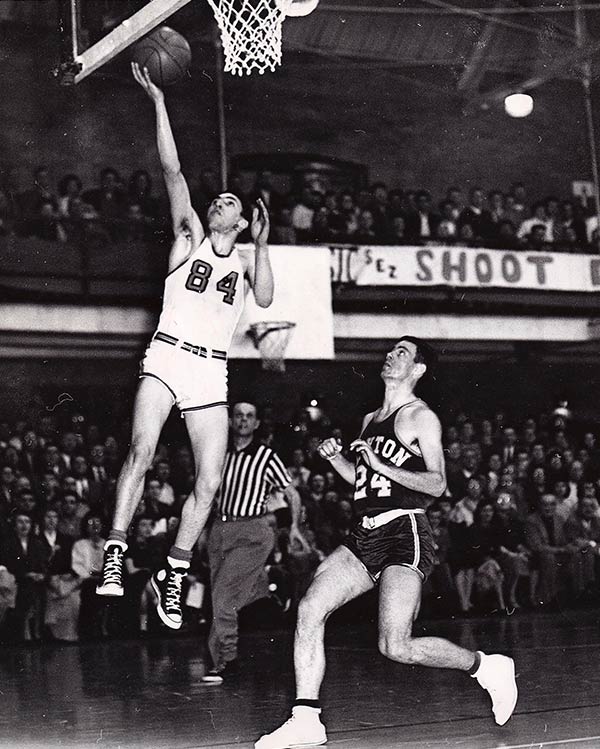 BGSU joined the Mid-American Conference (MAC) in 1953-54, a season in which the Falcons went 10-3 in league play to finish second overall. 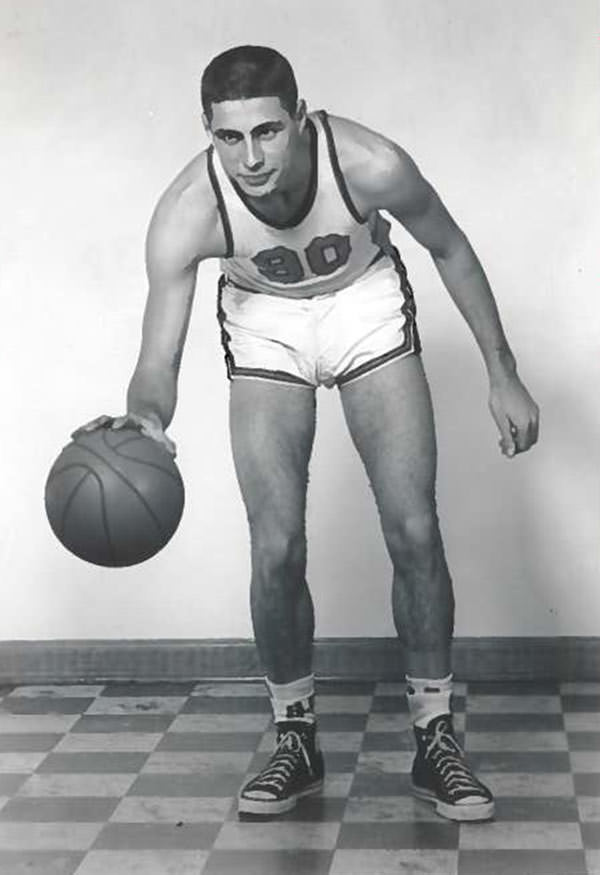 Perhaps the largest number of BGSU Hall of Famers came from the 1945-55 era, with a total of 13 Falcon men’s basketball players inducted from this time period.

Anderson, who coached the Falcons for 21 years from 1942-63, was inducted into the BGSU Athletics Hall of Fame in 1966, after finishing his career as the all-time wins leader in BGSU history with a record of 362-185 overall.

Other men’s basketball inductees from this era include

Championships and the NCAA Tournament – 1955-65 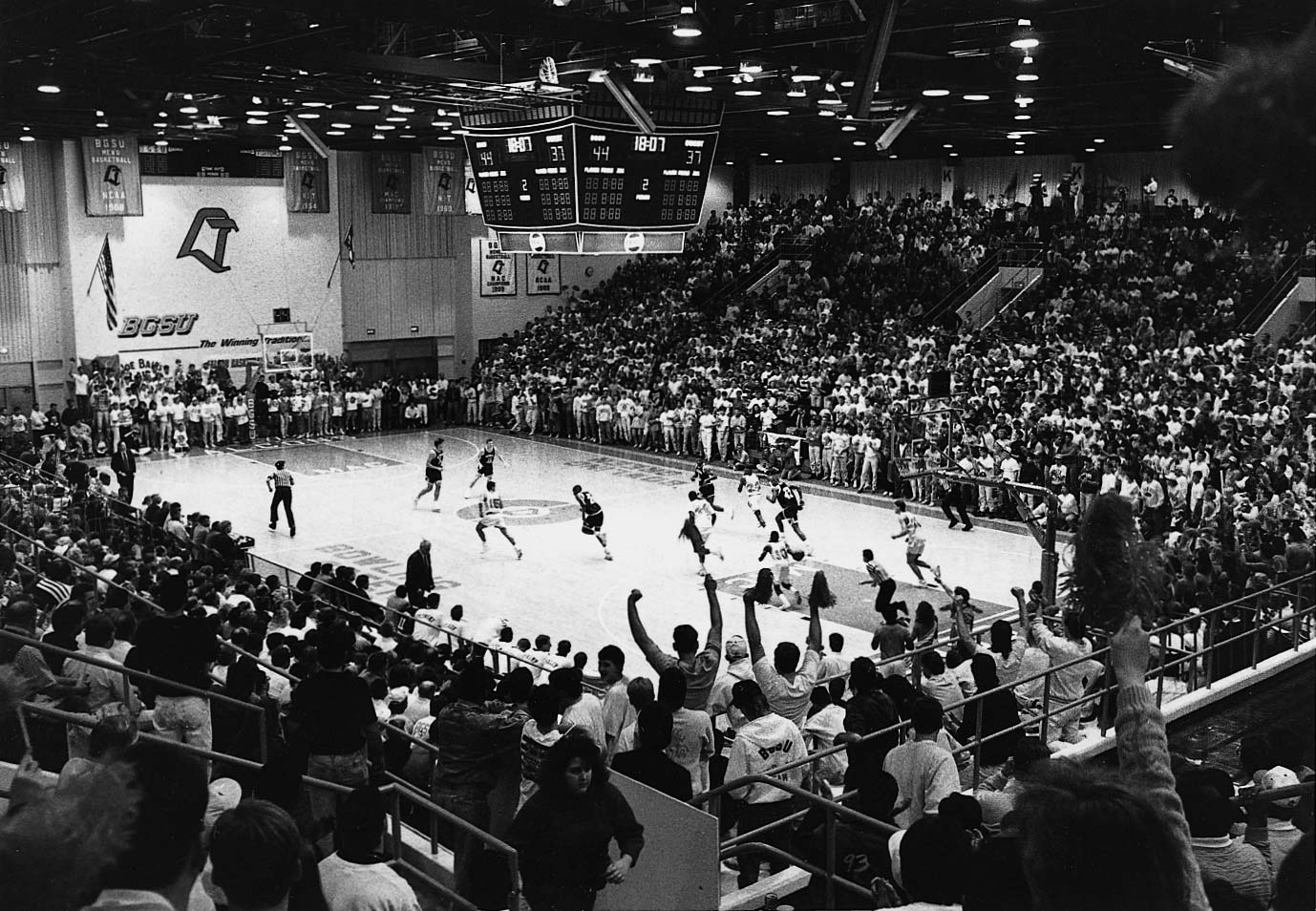 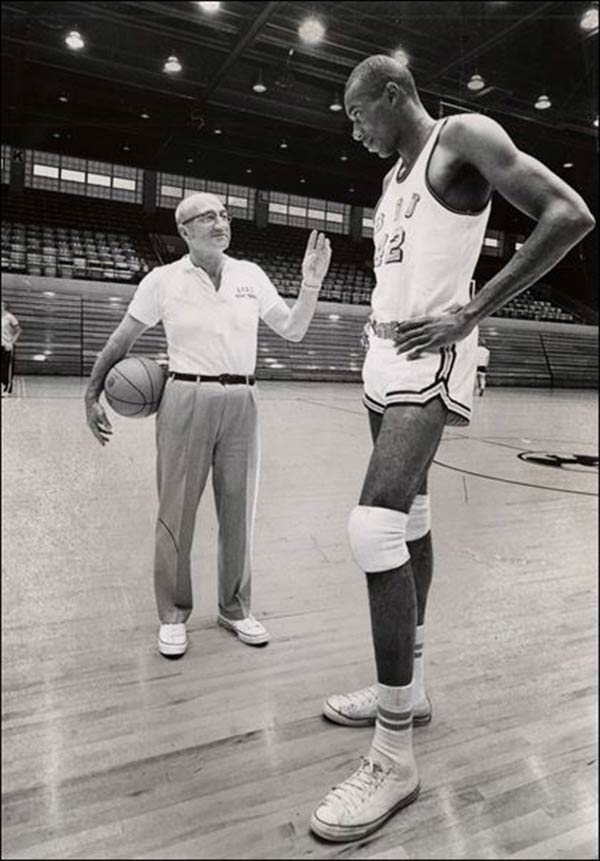 With all of BGSU's success from 1955-65, a trio of players was named All-Americans in Jim Darrow, Nate Thurmond and Howard Komives.

Passing of the Whistle

Coach Anderson transitioned from the sidelines to administration after the 1962-63 season, as he continued to serve as the athletic director. Anderson ended his 21-year coaching career at BGSU with an overall 362-185 record from 1942-63. His teams won three MAC Championships over his final five seasons on the sidelines, including back-to-back conference championships in his final two years in 1961-62 and 1962-63. Anderson had three teams go to the NCAA Tournament and led six different squads to the NIT Tournament during his time as the Falcons' head coach. His 1944-45 team finished second in the NIT, while his 1948-49 team finished third.

Headlining the Hall of Famers during this time was the duo of Anderson and Thurmond, who were also both elected into the National Basketball Hall of Fame in July, 1985.

Thurmond was an All-American center on two MAC Championship basketball teams at Bowling Green, and went on to be named one of the top 50 players in NBA history.

Other men’s basketball inductees from this era include: 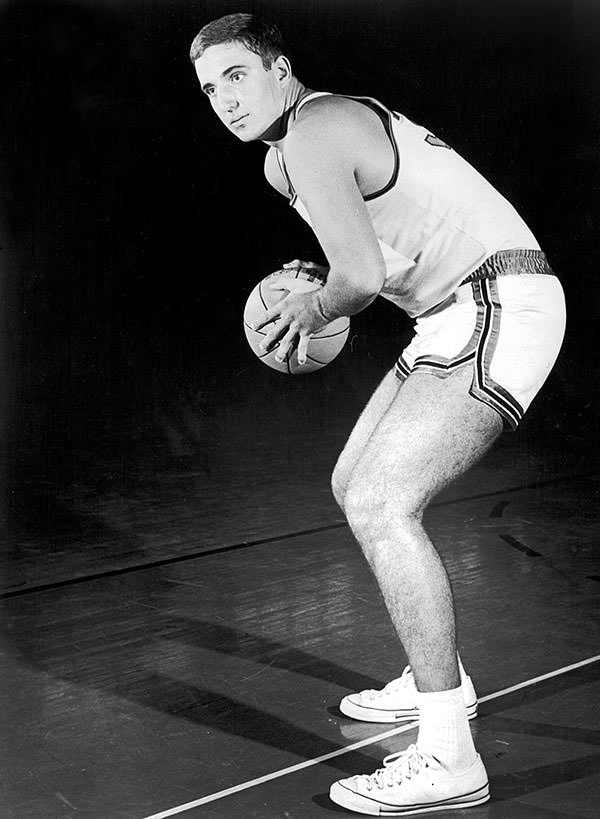 Bowling Green picked up its fourth MAC title in 1967-78 and made the postseason twice from 1965-75, including the NCAA National Championship Tournament in 1968. BGSU also competed in the National Commissioners Invitational Tournament (NCIT) in 1975.

Headlined by BGSU's first-ever MAC Player of the Year in Jim Penix in 1969-70, a number of Falcons received MAC honors throughout the 1965-75 era, with Piatkowski and Cornelius Cash receiving all-conference recognition three times apiece.

After Anderson's 21-year run as the leader of the BGSU men's basketball program ended with his retirement in 1962-63, the 1965-75 decade of Falcons' basketball saw four different coaches in Warren Scholler, Bill Fitch, Bob Conibear and Pat Haley.

BGSU had four future BGSU Athletics Hall of Famers at BGSU during 1965-75 in Piatkowski, Cash, Rich Walker, and most recently, Jim Lessig.

Centennial Season Look Back: – A Decade of Future Draft Picks- 1965-75 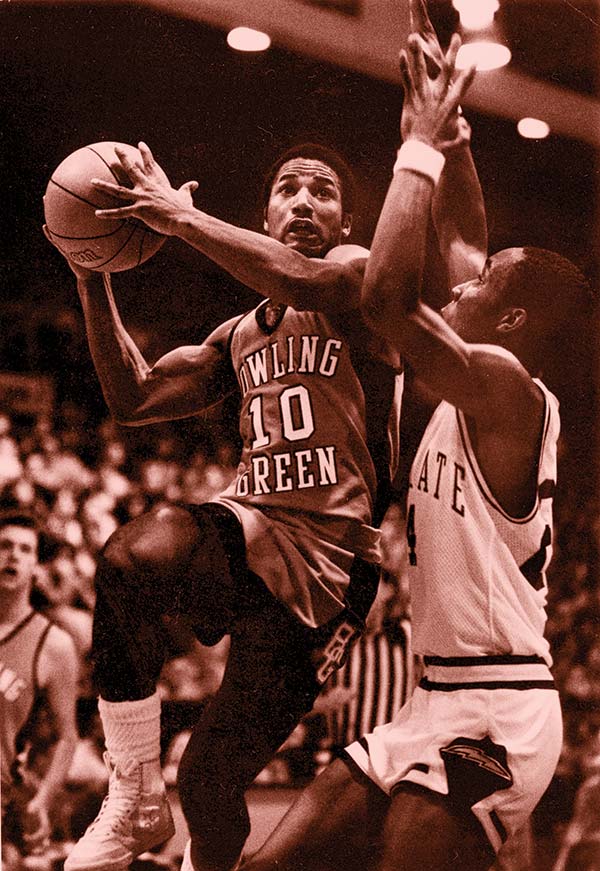 With a total of three coaches from 1963-1971 after the retirement of Anderson, the decade of BGSU men's basketball from 1975-85 saw just two head coaches lead the program with Haley passing the torch on to John Weinert.

The Bowling Green State University men's basketball team picked up their fifth and sixth MAC Championship titles during the 1975-85 decade, earning the conference crown in both 1980-81 and 1982-83. The Falcons also returned to the NIT twice during this period, earning bids to the national postseason event in both 1980 and 1983.

Led by David Jenkins’ Associate Press (AP) All-American Honorable Mention honors in 1983-84, a trio of Falcons were recognized nationally during the 1975-85 era of BGSU men's' basketball.

David Greer is the lone Falcon from 1975-85 who has been selected into the BGSU Athletics Hall of Fame, inducted as part of the Class of 1999.

Centennial Season Look Back: Falcons Give the Reins to Weinert – 1975-85 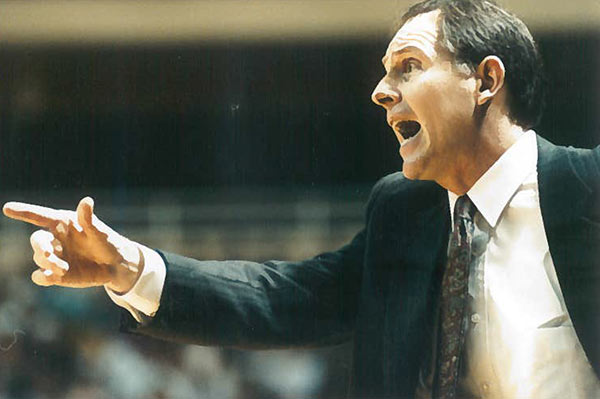 Weinert retired to end his career at BGSU with an overall record of 146-133 over 10 seasons in Bowling Green. Then, new head coach Jim Larrañaga was hired and made an immediate turnaround in his first season, leading the Falcons to a 15-14 overall record in 1986-87. Coach Larrañaga would lead the program for a total of 11 years, posting an overall record of 170-144 from 1986-97. His 170 wins at BGSU are second only to Anderson, who recorded 362 wins over 21 seasons at BGSU from 1942-63.

Headlined by two Falcons earning MAC Freshman of the Year recognition in Shane Kline-Ruminski in 1992 and Antonio Daniels in 1994, a total of 20 Falcons received All-MAC accolades during this decade, while Steve Martenet and Jay Larrañaga earned Academic All-MAC honors. Current men’s basketball head coach Michael Huger was a two-time All-MAC selection, named to the second-team in 1991-92 and then earning a spot on the first-team in 1992-93.

A total of two Falcons that played for BGSU from 1985-95 have been inducted into the BGSU Athletics Hall of Fame in Kline-Ruminski and Daniels. 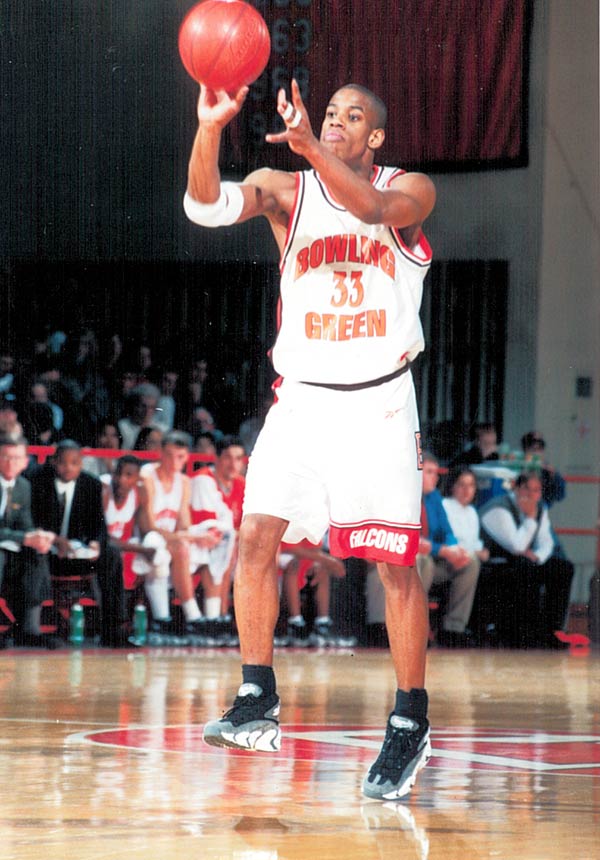 From Larrañaga to Dakich

With an overall record of 170-144, eight winning seasons, including the last four at BGSU, and three postseason tournament appearances in the National Invitation Tournament in 1990, 1991 and 1997, Larrañaga moved on to George Mason after being named the MAC Coach of the Year in 1997, in which the Falcons went 22-10 overall and won the MAC Championship in 1996-97.

Dan Dakich, a former player and assistant coach under Bobby Knight at Indiana University from 1981-97, took over the reins in 1997-98. Under Dakich the Falcons made NIT appearances in 2000 and 2002, and his 156 career wins at Bowling Green are tied for the third most all-time for a head coach at BGSU with Landis who coached 17 seasons from 1925-42.

Two Falcons that played for BGSU from 1995-2005 have been inducted into the BGSU Athletics Hall of Fame in Daniels and Stacey. 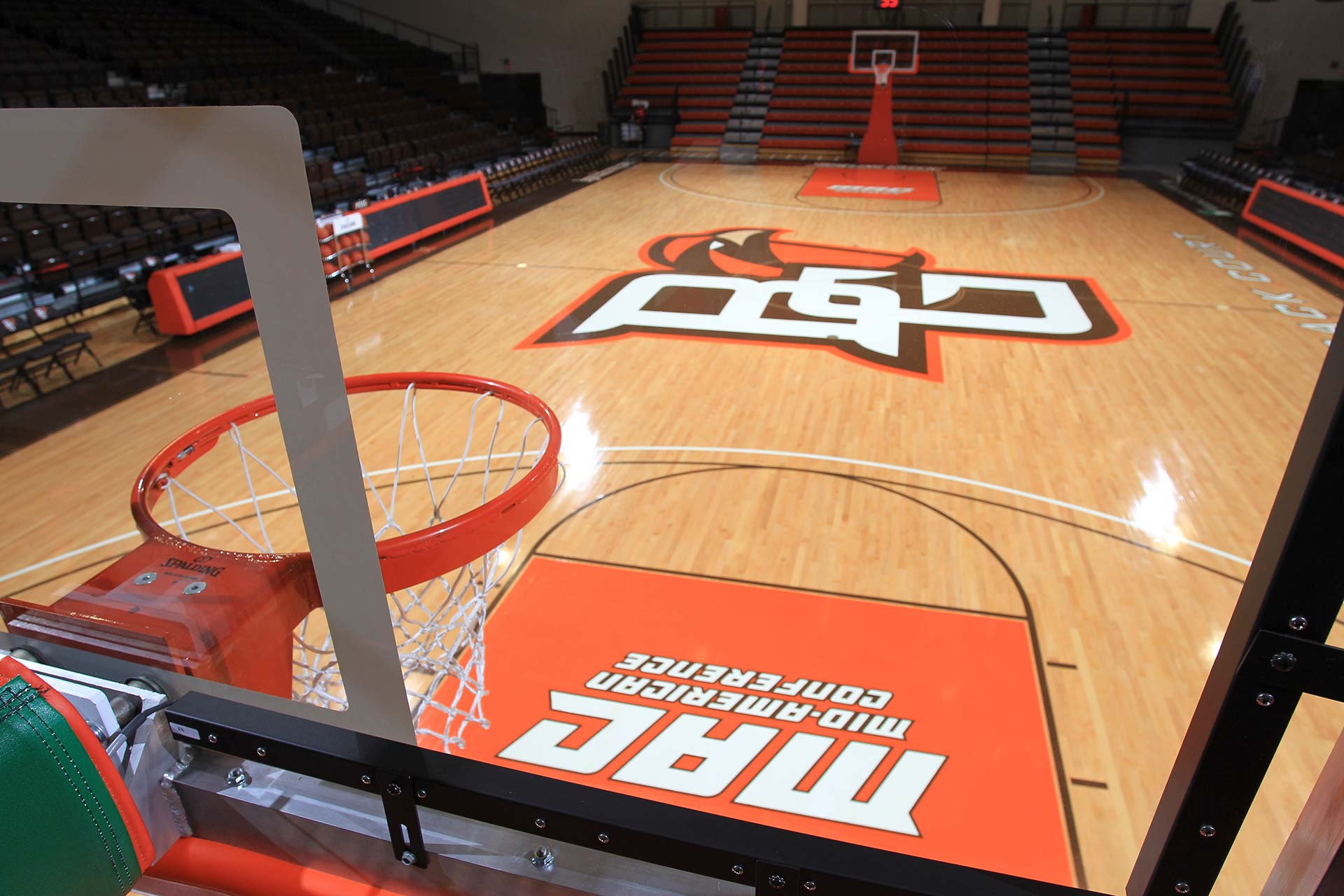 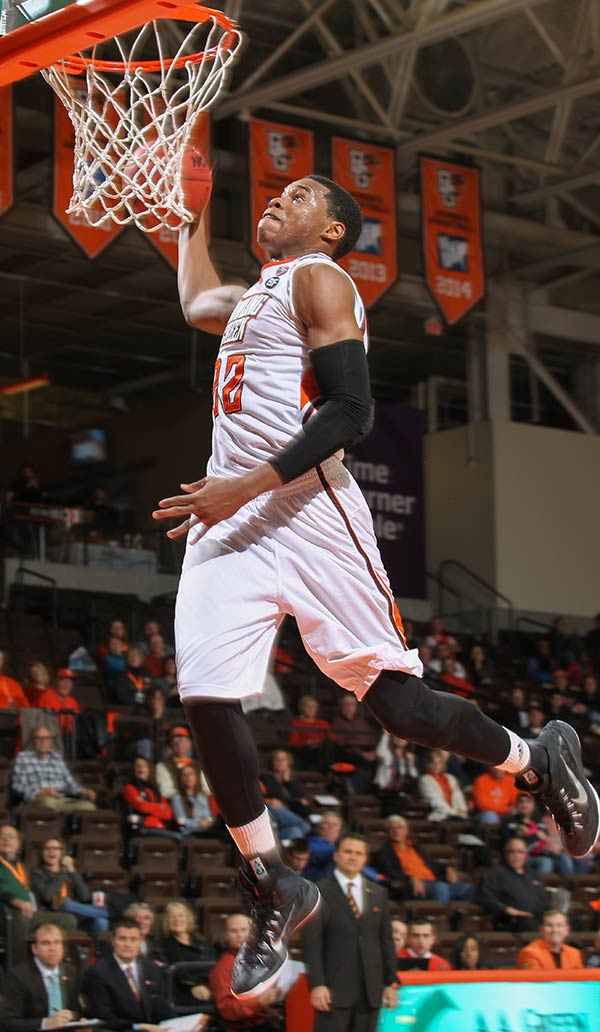 From Anderson to the Stroh

The Stroh Center also serves as the home for the Falcon men's and women's basketball and volleyball programs. The facility was named for Kermit F. and Mary Lu Stroh of Wapakoneta, Ohio, who donated $8 million.

In January 2011, Bill Frack gave a $10 million endowment earmarked for the men's basketball program. At the time, it was the largest one-time gift ever given to a Mid-American Conference basketball program and is still to this day.

The Falcons picked up their ninth MAC Championship in 2008-09 under head coach Louis Orr. A trio of teams went on to play in the postseason with the 2008-09 team playing in the NIT and both the 2011-12 and the 2014-15 team advancing to play in the CollegeInsider.com Tournament (CIT). 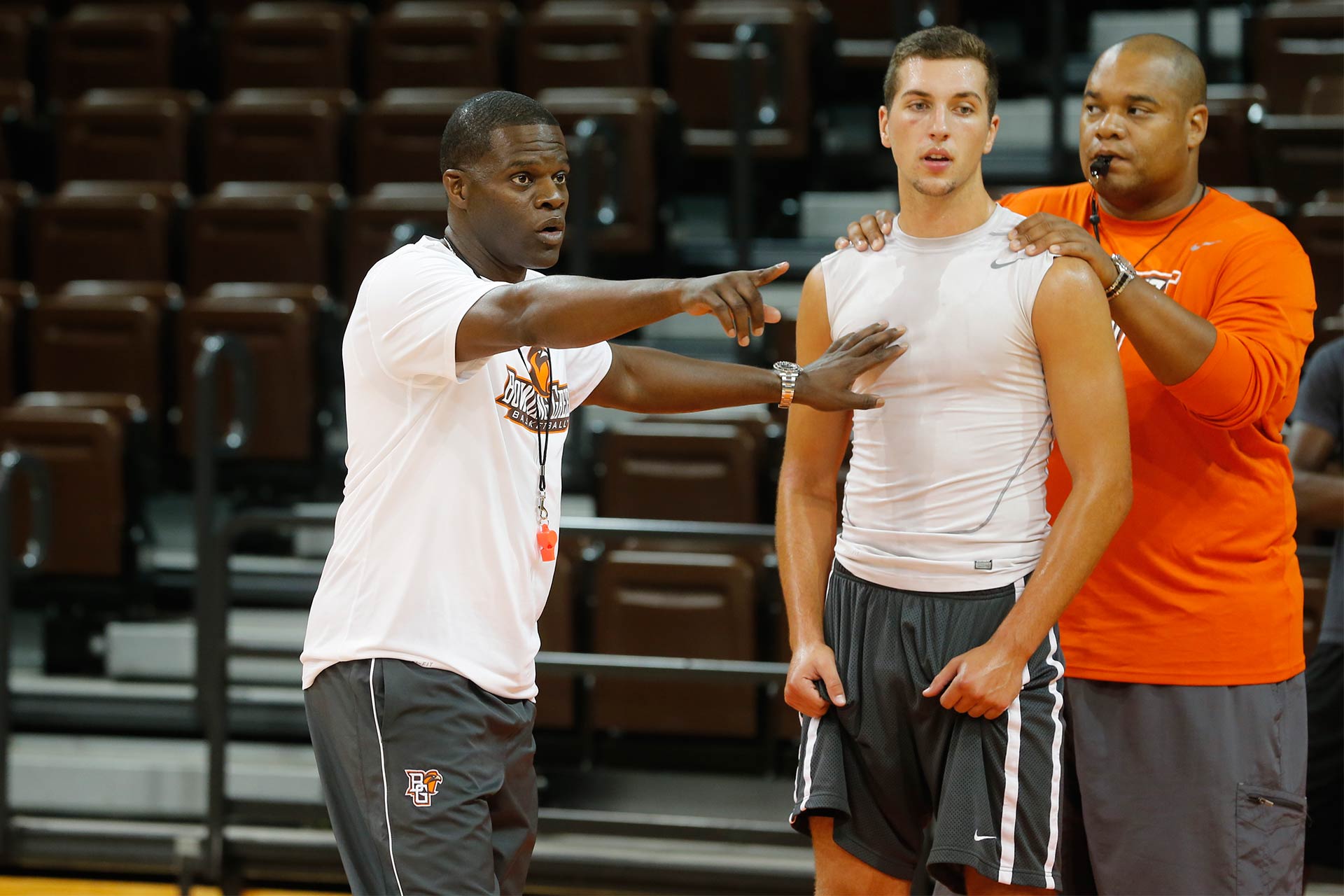 Just last season, in 2014-15, Richaun Holmes was tabbed the MAC Defensive Player of the Year, becoming only the second Falcon ever to receive this honor — joining DeMar Moore who won the award in 1996-97.

Coaches Over the Last Decade

Dakich guided the Falcons into their most recent decade of play, as the former Hoosier coached the Falcons in both 2005-06 and 2006-07. Orr took over the reins in 2007-08 and made an immediate impact by guiding the Falcons to a MAC Championship in 2008-09. Orr coached for seven seasons at BGSU from 2007-14. BGSU recorded a record of 21-12 in 2014-15 under head coach Chris Jans and went on to play in the CIT postseason tournament, recording the program's first national postseason tournament win since 1975. A standout player for the Falcons from 1989-93, Michael Huger was named the 17th head men’s basketball coach on April 17, 2015.