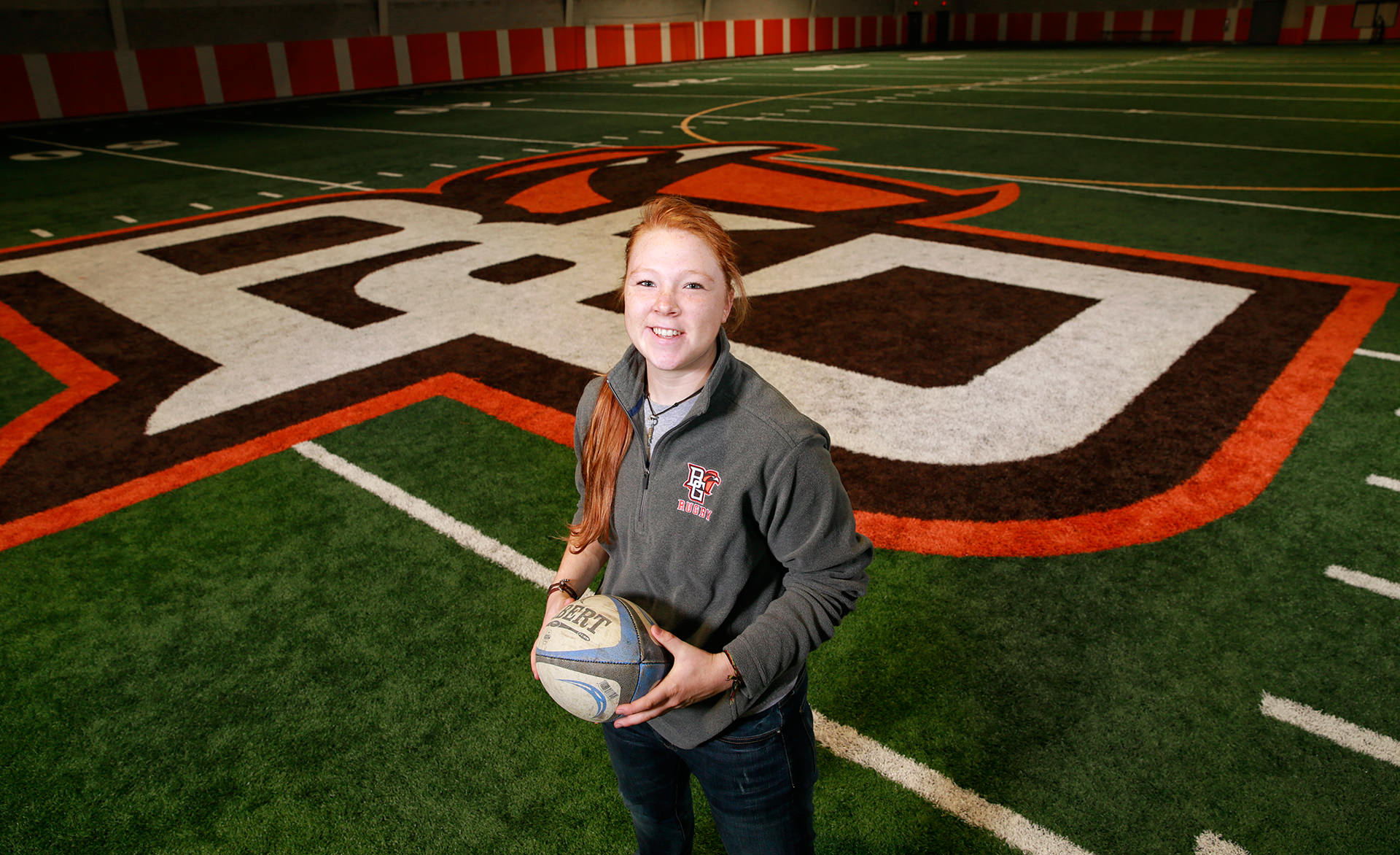 Kayla Tesmer is no stranger to adversity. The Barberton, Ohio, native has overcome multiple hardships in her short 23 years, giving her a level of maturity and balance well beyond her years. As a first generation college student and the first of her siblings to traditionally graduate from high school (one of her sister's received her GED), she came to Bowling Green State University on a mission to succeed.

“My parents never pushed me to go to college, but they were so excited when I told them I wanted to go,” Tesmer said. “They were so emotional when I received my high school diploma I knew that succeeding in college was bigger than just me.”

Navigating the college landscape was difficult for the first generation college student. “I had no idea what to do,” she said. “From filling out the FAFSA, to getting loans and signing up for housing, everything was new to us and we did the best we could.”

Tesmer knew she would have to support herself through college so, with the help of her mother, she filled out close to 20 scholarship applications and was awarded close to $10,000 in aid.

While most of her high school class decided on Kent State or the University of Akron, Tesmer created her own path and decided to come to BGSU. When she arrived on campus in the fall of 2011 she did not know a single person, but by the end of her freshman year she joined the women’s club basketball team and the women's club rugby team, secured a job at Bob Evans (which she still has) and took on a second job in the intramural office.

Tesmer credits her work ethic mostly to her parents, but also, to everything she endured as a child. At the young age of 11 she was diagnosed with Type 1 diabetes. As the only member in her family with the disease, this news came as quite a shock. However, she took it with a smile and started administering shots to herself and counting her carbohydrates in order to manage her disease.

“The year after I was diagnosed with diabetes, the doctor told me I also had chronic thyroid disease, which can be a side effect,” Tesmer said. “That same year I contracted a staph infection in my leg and the infection started to spread. The doctor informed us they might have to amputate my leg.”

Much to her relief, the infection stopped spreading and doctors were able to treat her leg. Tesmer was an active child, into sports and other activities, and the news of a possible amputation was overwhelming. Still, she maintained a positive attitude through everything and her love of sports grew even more. So much so that she decided to major in sport management when she arrived at BGSU.

“My education also made it easier for me take on a leadership role with the rugby program and help it to reach its fullest potential.”

She put her education to use during her sophomore year when she took on an elevated role within the club rugby program. Within two years she became an administrator and was named captain for the program. Club sports are very different from varsity sports and intramurals at the college level.  Very few teams are fortunate to have coaches that are not on the team. Most of the time, the team is responsible for creating lineups, fundraising, scheduling, budgeting, ordering uniforms and other operational details. Tesmer credits her ability to step into an administrative role to her sport management classes, professors and veteran teammates.

“My professors really care about their students,” she said. “Dr. Schneider, specifically, was always available to answer questions or talk about an issue that came up in class. My education also made it easier for me take on a leadership role with the rugby program and help it to reach its fullest potential.”

There is no doubt that Tesmer is extremely passionate about the club rugby program. During her senior season, she began connecting with alumnae of the program and started an alumnae weekend. The weekend was a huge success. Falcons from decades past returned to campus for a weekend of activities and they donated close to $1,000 to the program.

Tesmer saw this as a success, and even though her playing days might be numbered, she presented the team with a manual that she put together so younger generations can continue to grow the program.

“Club rugby was a huge part of my experience at BGSU,” she said. “I met some of my best friends, girls that will someday be in my wedding, and learned so much about myself. I can’t wait to come back and play in the alumni game.”

“College is all about the experience...I loved that I was challenged and held accountable. I went to college with the mindset that I was here to learn and going to class and paying attention is how I made the most of my opportunity.”

Tesmer admits she was nervous about graduating and getting a job over the past summer, therefore, she decided to explore the country before she returned for her final semester.

With $700 in hand, she traveled to 20 states and five national parks, hiked the Grand Canyon and went on an RV trip through Maine with her father where she ate lobster for the first time.

“College is all about the experience,” she summarized. “I loved that I was challenged and held accountable. I went to college with the mindset that I was here to learn and going to class and paying attention is how I made the most of my opportunity.”

On Saturday, Dec. 19, Tesmer will proudly walk across the stage representing her family and receive her diploma. She created a new path as a first generation college student and will leave as a college graduate, leader, friend, explorer and pioneer.