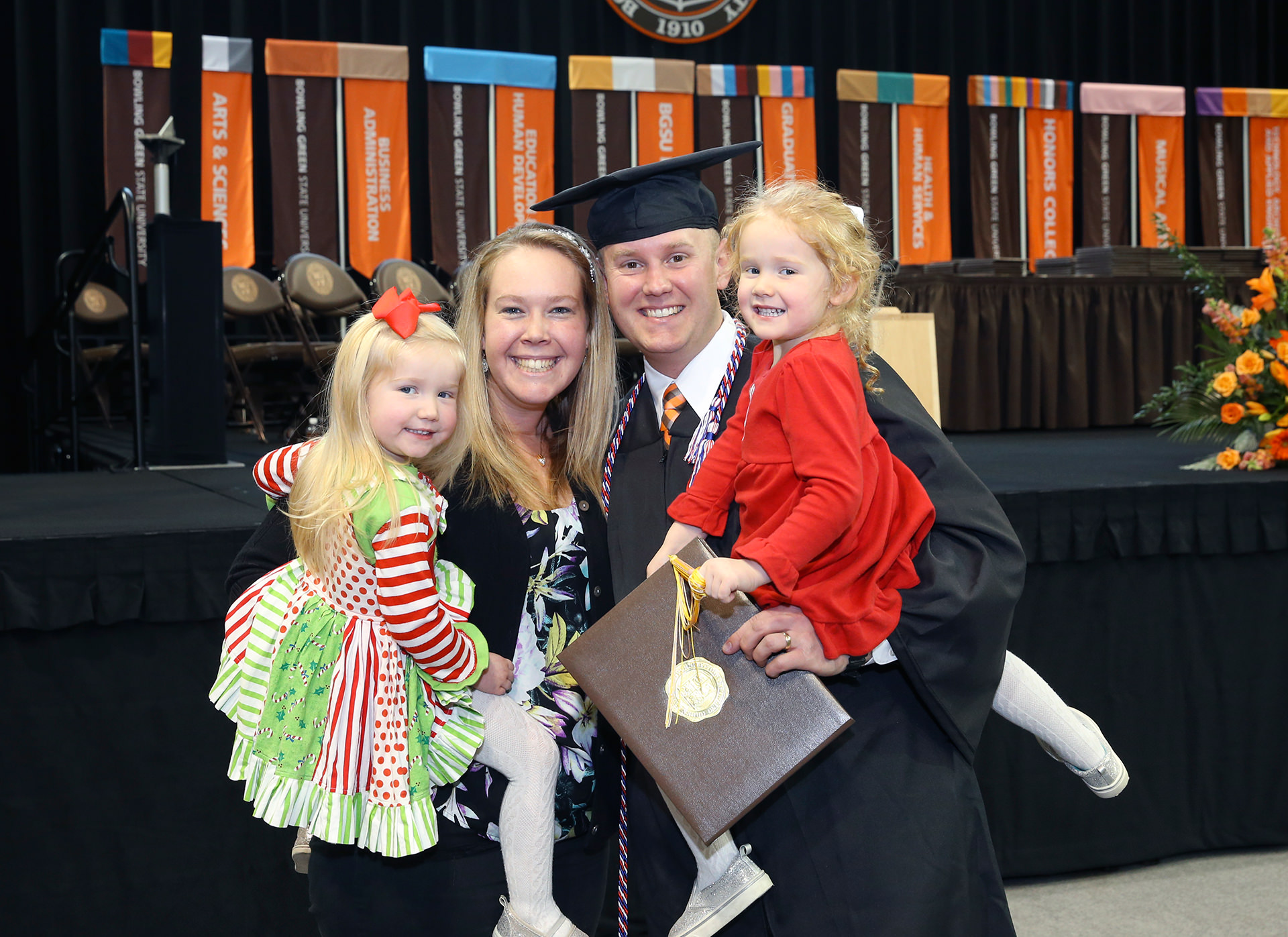 On his first day at BGSU, Derrick Loy got an extensive tour of campus usually reserved for prospective students, followed by a reminder to not be late for his graduation. That’s right, Loy received his degree on Dec. 18, the same day he stepped foot on the Bowling Green State University campus for the first time.

Loy, a 30-year-old who is in his 11th year of active duty service in the U.S. Air Force, received a degree in learning design and technology and currently lives in Colorado Springs, Colo.

He's been on an extended educational journey that includes his unique connection to BGSU—a knowledge pathway that has spanned more than 1,000 miles, leaped the Mississippi River, flirted with the Continental Divide and jumped across two time zones.

“I’ve watched BGSU football games on television, I’ve seen lots of pictures of the place, and I’ve been in regular contact with my advisers and my professors,” Loy said about his days as a student. “But it was nice to see them in person for the first time and take that long walk around the campus.”

Loy, who is originally from Arkansas, joined the Air Force right out of high school, intent on seeing the world and getting an education. He has been taking classes at various institutions for more than a decade, chipping away incrementally while maintaining his myriad commitments in the service, where he works on satellites and early warning missile defense as a technical sergeant and space systems operator.

“Throughout the process, I was looking for a strong, traditional brick and mortar school where I could earn my degree and I had heard good things about Bowling Green,” Loy said. “I knew they were legit, so I took my first class at BGSU in 2011 and never looked back.”

Loy said distance learning is quite common in the military, where assignments, transfers and deployments make it very difficult to attend college in a traditional format. He researched his options before connecting with BGSU.

“I had talked to a number of folks in the military who had done this with other schools, and many of them were disappointed in the experience and felt like they ended up with a degree that wasn’t worth the paper it was printed on,” he said. “My experience at BG was the exact opposite. It’s been a full four years, and it has been everything I had hoped for.”

Loy said the distance learning option and the phenomenal support he said he received from both educators and advisers at BGSU allowed him to maintain his connection, despite his changing circumstances and surroundings.

“Logistically, I was able to take classes from all over the world,” he said. “While I was deployed in Baghdad, I took several courses from Bowling Green. I’d work my 12-hour day, and then take my classes. It’s amazing to think about, but with programs like this, you can get an education while you’re in a war zone. There is no way, shape or form I would have been able to do this without the online schooling option.”

Loy cited Dr. Gary Benjamin, a lecturer in learning design and technology, and eCampus Associate Director Sherri Orwick Ogden as being especially helpful during his schooling. He also was very grateful for the assistance he received from academic adviser Dr. Bur Shilling and from technology instructor Dr. Cori Zuppo.

“Really, the whole College of Technology bent over backwards to help accommodate me. Being a student while in the military is not the easiest thing to do because you really have to work at the scheduling side of it,” he said.

“Everyone went above and beyond what could be expected. I had heard nightmare stories about the experiences fellow servicemen had at other institutions and how they had to struggle to get help, but that was never the case with me. Everyone at BG was awesome.”

With that kind of support network behind him, plus his drive to complete his studies, Loy was certain his BGSU graduation day would arrive.

“It was a very important goal, because I’m the first generation on my father’s side of the family to get a degree and that was a big motivation,” Loy said. “Plus, if you don’t have a relevant degree in this day and age, regardless of the experience you have, it will be harder to get a job on the outside and even within the military. I had a fire in my belly to finish my degree.”

Loy said his BGSU degree will put him on the path to officer training school. He intends to continue his education at another institution and earn a master's degree in operations management, and once he leaves the military Loy hopes to remain in the defense industry.

"The love and support of my wife, Carla, and our two daughters, Norha and Charli, truly helped make my degree a possibility."