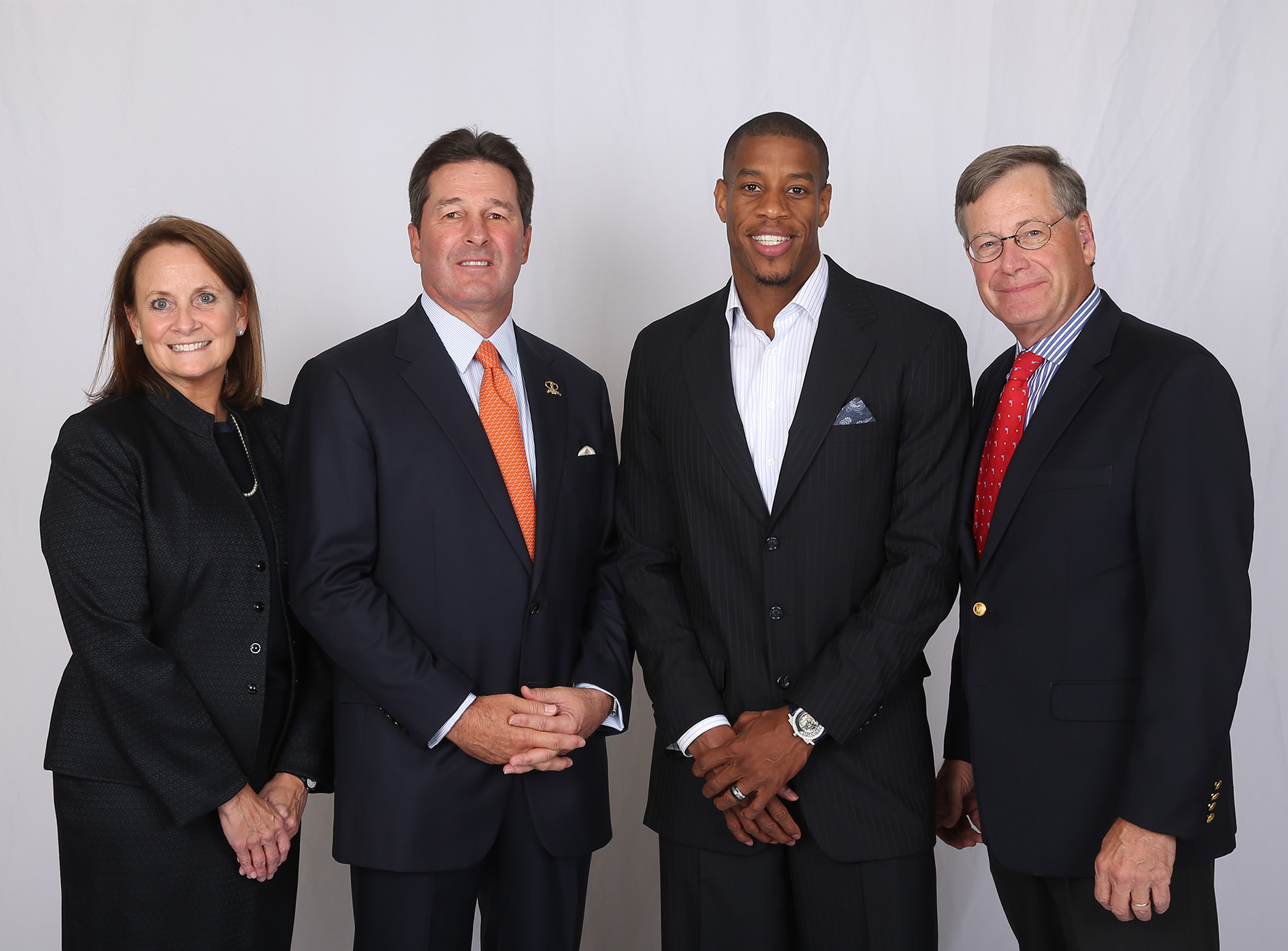 Award is the highest honor bestowed by Alumni Association

The  Academy of Distinguished Alumni was created in 2011 by Bowling Green State University and its Alumni Association. The award is the highest honor bestowed by the Alumni Association and was established to recognize the extraordinary accomplishments of alumni who have made significant  contributions to their chosen professional field and/or through their community involvement. The University is proud to honor those alumni who have inspired their country, state, community and BGSU.

The  2015 Academy of Distinguished Alumni ceremony was held on Oct. 15 in the Lenhart Grand Ballroom of the Bowen-Thompson Student Union. The inductees were Pamela Beall ’84 , Antonio Daniels ’97, Peter Engelhart  ’75 and John Mitchell ’78.

Pamela Beall is director and president of MPLX LP, a master limited partnership sponsored by Marathon Petroleum Corporation, and senior vice president for corporate planning, government and public affairs at Marathon Petroleum. She serves on the board of trustees of The University of Findlay and is a member of The Ohio Society of CPAs.

She began her career with Marathon in 1978 as an auditor and held positions with the corporate risk and environmental affairs and domestic funds organizations before transferring to USX Corporation as general manager for treasury services in 1985. She was vice president and treasurer of NationsRent Inc. and OHM Corporation, and served on the boards of directors of System One Services Inc. and Boyle Engineering.

Beall graduated from The University of Findlay with a bachelor's degree in accounting in 1978. In 1984, she received her master's degree in business administration from Bowling Green State University. She was licensed as a certified public accountant in Ohio in 1984.

Antonio Daniels is the third-highest draft pick in Falcon basketball history, being selected No. 4 overall by the Vancouver Grizzlies in 1997. That came on the heels of a senior season in which he averaged 24 points per game and led Bowling Green to a share of the MAC regular season crown. He is fourth in career scoring at Bowling Green with 1,789 points, second in career assists with 563 and seventh in career steals with 162. Daniels was an AP Honorable Mention All-American in 1997 as well. He was selected to the BGSU Athletics Hall of Fame in his first year of  eligibility in 2007 and won an NBA crown with the San Antonio Spurs in 1999.

After 13 seasons in the NBA and two more in the D-league, Daniels turned his attention to success in another arena with the Daniels Family  Foundation. With his wife, Sonia, he combines his three key passions in life – faith, family and fitness – to improve the lives of children and families in San Antonio and across the country.

Antonio and Sonia met in 2002 through an introduction from a mutual friend. Although it took some time for Antonio to muster the courage to ask, the two shared a first date at a local 24-hour diner. A short courtship later, the couple wed in 2004 and now have two daughters, Jada and Jordyn. Faith and fitness have proved to be the cornerstone of their marriage and family life, so they have dedicated themselves to sharing the message of healthy lifestyles and relationships with as many people as possible through the Daniels Family Foundation.

The  foundation provides opportunities to improve fitness, develop  faith-based practices and foster healthy families, and to attend low-cost summer basketball camps. The Daniels' also serve as  spokespeople for San Antonio Parks and Recreation. In addition, Antonio is a personality on the San Antonio ESPN Radio Show. He was named the 2015 San Antonio Magazine Radio Personality of the Year.

Peter Englehart’s career as an entrepreneur and investor began upon his graduation from BGSU in 1975 where he earned a Bachelor of Science degree in journalism, later to be followed by a MBA from the Harvard Business School. He started his professional career as a publicist for the Professional Bowlers Tour, and two years thereafter began as a production assistant at ABC Sports. This began a 25-year career in the sports television business where he earned six Emmy Awards at ABC Sports and ESPN. Among his production credits were assignments at four Olympic Games, the America’s Cup, French and Australian Open tennis championships, NCAA College Football, NASCAR and various other telecasts on ABC’s venerable series, Wide World of Sports. After more than eight years at ABC, Englehart accepted a position as ESPN’s director of program planning where he oversaw strategic planning and acquisitions for all network programming and led the launch of ESPN2.

In 1995, Englehart founded the Outdoor Life Network (nee NBC Sports Channel), along with the Speedvision Cable Network. In this role, he was responsible for all creative and financial aspects of the network's programming and production. He developed properties such as the Tour de France and Professional Bull Riders into the network's line-up. After Outdoor Life Network reached nearly 60 million U.S. households in distribution, he helped successfully sell the network to the Comcast  Corporation.

In 2007 he founded and became president and CEO of the Competitor Group, the world’s largest endurance sports (marathons, triathlons and cycling) company. He expanded the company’s trademark Rock 'n Roll Marathon Series brand into 34 worldwide locations and controlled media properties in the endurance sector though ownership of five magazines and multiple digital properties. He successfully sold the company in December 2012.

He is currently involved in multiple enterprises and investments. He is chairman of the Board of TEN: The Enthusiast Network. TEN is a network of enthusiast brands such as Motor Trend, Automobile, Hot Rod, Surfer, Powder and Grind TV. With more than 50 publications, 60 websites, and 1,000 branded products, the world’s largest automotive video channel and world’s largest action/outdoor sports media platform, TEN connects companies with their most passionate audiences. He also serves as executive chairman of Javo Coffee Beverages, one of the country’s  premier providers of ready-to-serve coffee to restaurants and convenience stores. Additionally, Englehart is the executive producer of VStar Entertainment, where he oversees various national family entertainment tours such as “Sesame Street LIVE,” “Discover the Dinosaurs” and the Pro Football Hall of Fame “Honor the Heroes” Tour.

At BGSU he was voted Outstanding Senior Man and was president of the Undergraduate Alumni Association. He received the University's Presidential Distinguished Service Award, was voted ROTC Cadet of the year, was a member of Omicron Delta Kappa and earned three varsity letters in lacrosse.

John Mitchell is the global practice managing partner of the health care and life sciences practice at Heidrick and Struggles, an executive search firm. He is also a core member of the CEO and board of directors practice.

Before joining Heidrick and Struggles, he led the global private equity practice at a leading executive search firm. Previously, he was the firm’s life sciences practice leader for the Americas and a core member of its CEO and Board practice. He also served as the managing partner of another international search firm’s life sciences practice. He was elected to this firm’s board of directors.

A graduate of the BGSU College of Business Administration, Mitchell has nearly 30 years of experience in executive search, working at the senior executive and board levels, primarily advising companies in health care and life sciences, including global conglomerates, emerging firms, private equity-backed companies and start-ups. He has worked with firms operating in a broad range of investment areas from mega deals to venture capital and the middle-market arena.