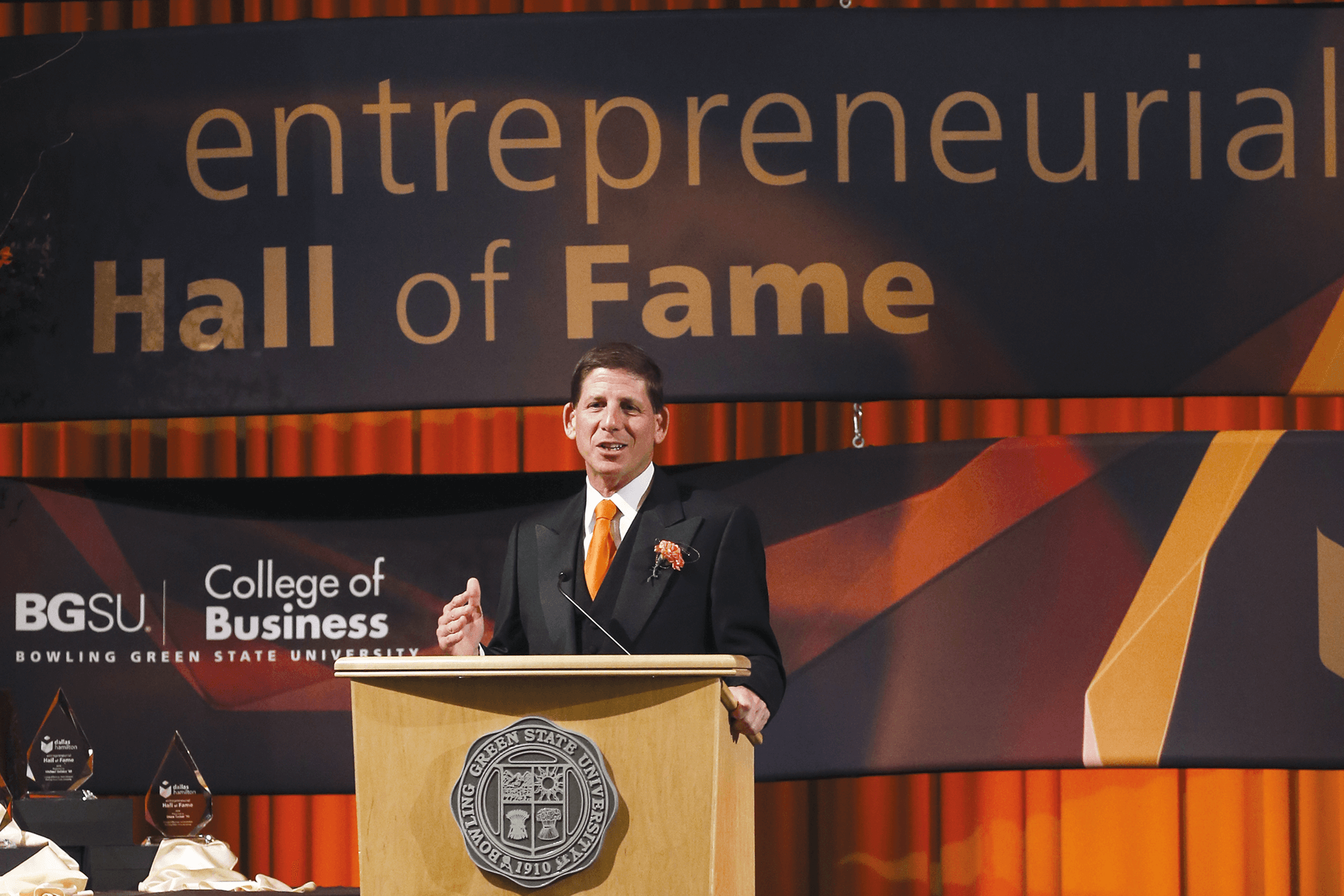 The Spirit of Innovation

Dr. Larry Benz ’84 recalls in great detail brainstorming sessions with his Delta Tau Delta fraternity brothers, and the way they were always looking for the opportunity to pool their resources, harness their collective energy, and then work together to do something innovative and productive.

“We tried to find new ways we could maximize our funds and do some crazy things on as low a budget as possible,” the 1984 graduate said. “Through that fun, camaraderie and constantly trying to one-up one another came a lot of surprisingly innovative ideas.”

Whether it was a charity fundraiser, a project to enhance the sound system at the house, or a promotional campaign for a campus event, their zeal, creativity and passion for their goal often led to thinking well outside the box. On other occasions, it involved tearing the box apart and then building a new box, a better box.

For Benz, those days on campus several decades ago are not that far removed. He still does his best work while dwelling outside the established norms or the customary way of doing business. Benz is the president and CEO of Confluent Health, a consortium of companies in the physical therapy field. His companies have more than 110 outlets around the country, and Benz is nationally recognized for his expertise in private practice physical therapy and occupational medicine.

“At the time I was there, Bowling Green had a lot of first-generation college students, and I remember learning that there were so many different opinions and different ways to do things,” he said. “It was an eye-opening experience, and one that my company utilizes today. We never stop looking for a better way.”

Benz, a Cleveland native, lives in Louisville, Kentucky, is the co-developer of the website physicaltherapist.com and was named Ernst Young’s Entrepreneur of the Year for his region. His foundation is the co-developer of Jacmel Rehabilitation in Haiti. From 1984 through 1989, he served in the U.S. Army as a captain in the Army Medical Specialists Corps, where he received the Meritorious Service Medal.

The names of some of his companies offer a clear view of the philosophy Benz adheres to in the operation of his clinics – Evidence In Motion, NeuroRecovery Training Institute, Fit For Work, Breakthrough Physical Therapy. He still regards innovation as his most productive business partner and a constant companion.

“A vast majority of the patients we see are folks who are trying to get back to work or get back to their lives,” he said. “In order to identify the best ways to do that, we are innovating all of the time. We are out there trying to disrupt the normal or accepted ways and breaking things all of the time. We are constantly looking for tool kits that might precede research or find research that has never been applied to our profession. There has been some good disruptive work taking place in health care, and I believe you have to do that in order to find out what resonates with your customer.” 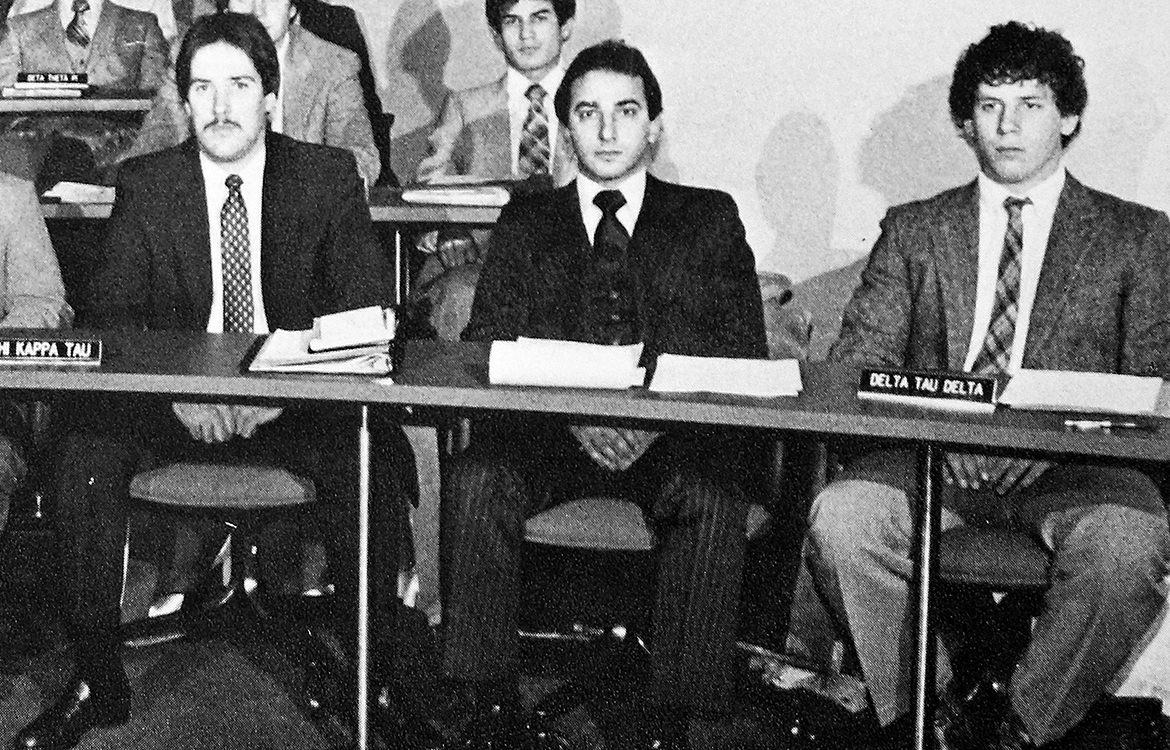 The creativity and innovation Dr. Larry Benz (right) experienced as a member of Delta Tau Delta fraternity and Panhellenic Council formed the foundation for his success as president and CEO of Confluent Health.

Benz said his experience at BGSU helped prepare him for his life as an entrepreneur and an evangelist for innovation.

“At BGSU, we were encouraged to take risks and make our own way, and you never forget an undergrad experience like that,” he said. “In the health sciences, we had external experiences and went out and field tested in nursing homes and other facilities. Outside the classroom, we got to observe small owner-operated businesses and really see how they performed. It was a very valuable immersion.”

Benz also lauded the work of BGSU faculty members, such as Dr. Lee Meserve, Distinguished Teaching Professor Emeritus of Biological Sciences and a member of the current committee that is the driving force behind the largest comprehensive fundraising campaign in BGSU history, and one that Benz is enthusiastically supporting as campaign co-chair.

During Benz’s time on campus as an undergraduate student, he got to experience the 1984 hockey national championship, the Motown music on Monday nights downtown, guarding “The Rock,” and getting a taste of governance experience while serving on the Interfraternity Council.

Benz has found that the outstanding aspects of the University have made him very comfortable sending his son, who will be a junior in the fall of 2017, to BGSU.

“There is definitely something special there,” he said. His involvement in the capital campaign is rooted in two primary areas, he added. 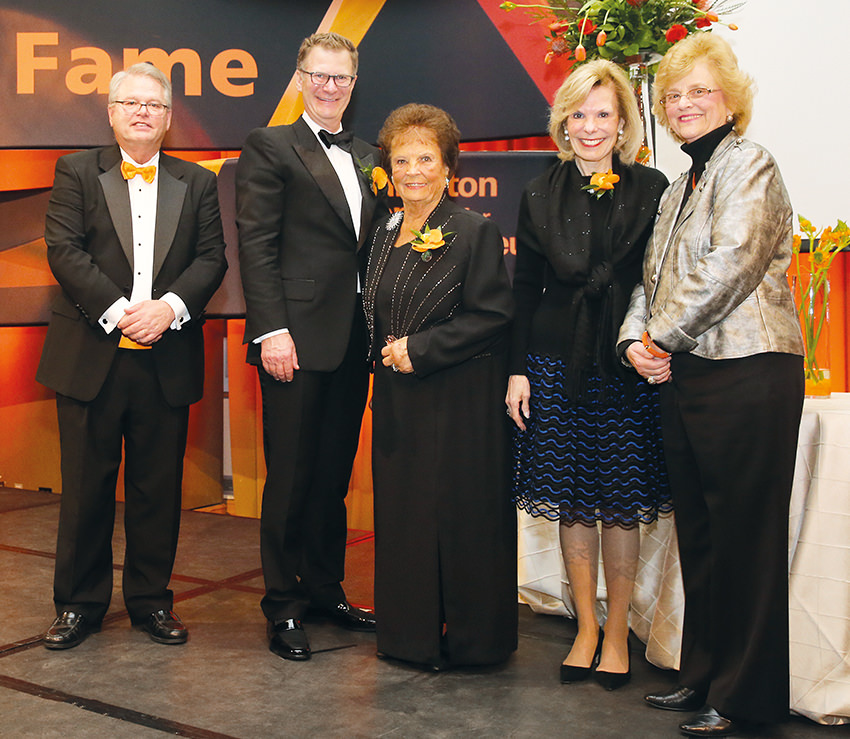 “There are always the altruistic reasons, wanting to give back to something that has meant so much in your life, but there is also a somewhat selfish reason, and that is just wanting to go back to a place that you have enjoyed for many years.” He sees the need for such a campaign as another major motivation.

“Higher education has never been under as much pressure as it is today,” he said. “The states are just not budgeting as much money for their universities, so these universities have found themselves in a position where they have to be innovative and entrepreneurial in order to stay viable and competitive. Private involvement is essential to success, and anytime something entrepreneurial is involved, that is a net attraction for me.

“State schools like BGSU are bearing the brunt of the budget tightening, and the economics in higher education today are such that if we don’t rework them, then there will be questions about the viability of these institutions going forward,” he said. “This is an era, a time with an ever-demanding consumer when we need to be very creative and innovative.”

Following that theme of innovation and under the direction of Dean Ray Braun, the college is establishing itself as a preeminent center for entrepreneurial leadership that integrates academic, experiential and lifelong learning and that actively contributes to economic vitality in the regional economy.

“The traditional approach to a business education, with students sitting in lecture halls or classrooms and just reading material, taking notes and taking tests – that is no longer an effective path,” Braun said. “It needs to be replaced with a culture of involvement that is designed to help students develop the skills, competencies and behaviors that will lead to success.”

Benz applauds that practice, having seen its value during his long and successful entrepreneurial journey. He said that as BGSU is making the educational experience more rewarding for its students, it is also creating myriad opportunities for them. “In today’s economy, a university has to balance academic curriculum with workforce development and what the market really wants,” he said. “We need more out of our new graduates. We need them to be good at hard skills, but also skilled at teamwork, collaboration, critical thinking, listening and exploring new paths.”

The examples of projects and programs that push outside the norms of traditional business education are numerous – the Women in Leadership conference, the Sebo Series in Entrepreneurship, the wildly popular E-Week, and the Hamilton Center for Entrepreneurial Leadership, which inducted three new honorees into its Hall of Fame in 2017 (pictured).

Inductee Maribeth S. Rahe started her career as the first female branch manager trainee for a small savings and loan and today is the president and CEO of Fort Washington Investment Advisors Inc. Also honored was Peggy Schmeltz, a longtime investment educator and independent investor whose highly successful investment career began while she was still an undergraduate business student at BGSU.

The Hall of Fame also inducted David Stickler, the CEO of Arkansas-based Big River Steel, who has spent the past two decades building and operating some of the world’s most successful and profitable steel mills by using more environmentally friendly recycled steel.

“These individuals demonstrate the contributions our alumni are making throughout the world with their extraordinary accomplishments,” President Mary Ellen Mazey said of the inductees. “BGSU is a better place because of them.” 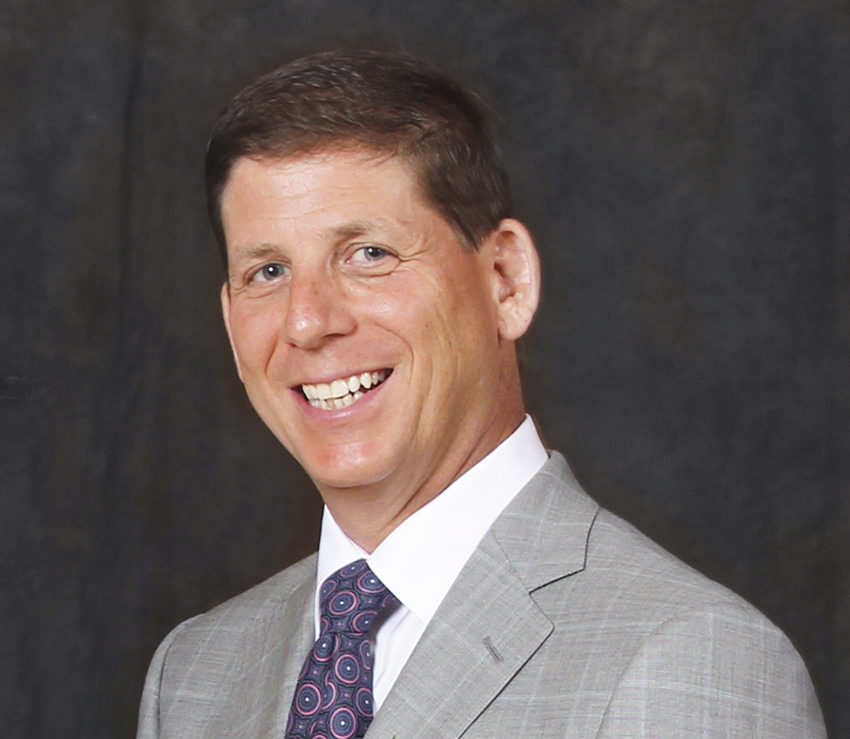 This is an era, a time with an ever-demanding consumer when we need to be very creative and innovative.

Benz said he is excited about the trail he sees BGSU blazing with such a creative, real-world learning environment. A monthly email update he receives from President Mazey has kept him abreast of the rapidly changing educational landscape.

“What has impressed me most about the University is that their plan going forward is holistic – they are creating unique learning experiences, they are linking graduate programs to research and they are putting together collaborative efforts with many different entities,” he said. “It is a very, very tough environment out there, but BGSU is showing a lot of success by staying ahead of the curve.”

With the College of Business home to one of the highest-ranked business programs in the country, according to U.S. News and World Report, and its accounting program rated the best in Ohio by Bloomberg Businessweek, staying at the top is the goal, and Benz sees the capital campaign as the ideal vehicle to help sustain that level of excellence all across the campus.

“We want to be constantly on the forefront of innovation, and what I see is Bowling Green fostering a good ecosystem that facilitates innovation,” he said. “In today’s highly challenging educational environment, BGSU is adjusting well, so we need to get everyone involved and set the University’s future for the coming decades. We are all stakeholders – more than 175,000 alumni plus faculty, staff, retirees, everyone – and together we can support and advance a bright future for BGSU.”

Benz is committed to advancing the success and reputation of the College of Business through alumni fundraising and engagement efforts, including his work as co-chair of the Changing Lives for the World comprehensive campaign. 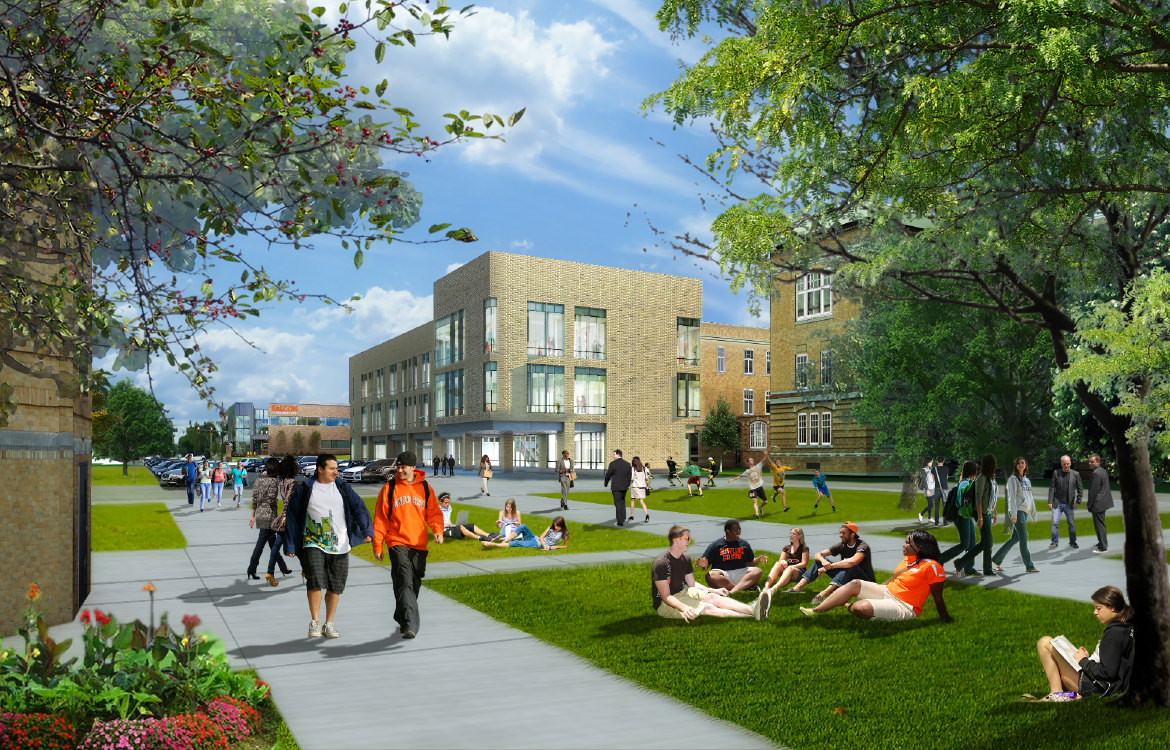