The new home for the School of Media and Communication and its related student groups is in the building formerly known as South Hall. The facility has undergone a dramatic renovation and is now named the Michael & Sara Kuhlin Center in recognition of the couple’s financial support.

The new home for the School of Media and Communication and its related student groups is in the building formerly known as South Hall. The facility has undergone a dramatic renovation and is now named the Michael & Sara Kuhlin Center in recognition of the couple’s financial support.

In 1959, when South Hall was among the newest classroom buildings at BGSU, the campus community was excited about plenty of classroom space and state-of-the-art technology such as a closed-circuit television system, sound-dead rooms and advanced hearing aid testing equipment.
Fifty-seven years and tens of thousands of students later, there is renewed buzz about the building, its newest purpose and the technology that will prepare students to be the next generations of media and communication professionals.

No longer is the building called South Hall. The directional name is replaced and it is now known as the Michael & Sara Kuhlin Center, thanks to the generosity of the Kuhlins, thoughtful and dedicated BGSU alumni.

Since 2014 the building has undergone a complete renovation, including the addition of a wing to the west of the existing building. The Kuhlin Center is the new home to the School of Media and Communication, which includes the communication, journalism and public relations, and media production and studies (formerly telecommunications) departments. In addition to undergraduate programs in those areas, the school also has master’s and doctoral programs in media and communication.

Programs within the school are focused on providing the 650 enrolled students the knowledge and experience to be competitive in today’s media and communication industries, where collaboration across media occurs in an instant, and “digital first” is the new mantra.

Students already benefit from a strong academic emphasis within each of the programs, according to Dr. Laura Stafford, director of the school. “Now, the new technologies and spaces within the Kuhlin Center will significantly enhance the preparation of students to excel among competitors when they enter the job market.”

They will have tremendous opportunities to practice what they’ve learned in a facility whose very configuration advances learning and expands ways of understanding how traditional skills and new skills can be deployed, combined and delivered through multiple channels. “And they will be ready to meet the challenges of these technological shifts in journalism, public relations, media production and communication,” Stafford said.

Journalism and public relations students will learn about and experience the convergence of information gathering, production and multi-channel delivery, she added.

Students can take advantage of the active-learning classrooms in the Kuhlin Center. These classrooms, next to the video and audio production suites, are lecture spaces within studio control rooms. The dual purpose allows production and teaching to occur simultaneously. An advanced projection system enables students to simultaneously watch the live action being recorded and see the work being done on the control boards.

The video and audio production suites will be in high demand because of the top-quality technologies and space. The video production suite offers many of the features found in today’s professional newsrooms. Various virtual sets can be generated for the different shows without the need to construct, store and redesign new sets. “Live reporting” space, and manual and robotic cameras all emulate the industry standards and provide practical, hands-on experiences that prepare BGSU students for broadcast and video production careers.

The audio production studio utilizes a “floating floors” concept that offers top-quality soundproofing and sound-shaping. The space is designed for music production and offers an isolation booth for drum sets or voice-over audio work. 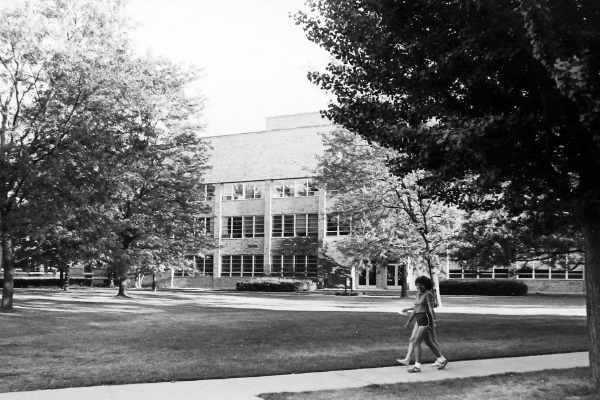 This move to a new building with advanced technologies has allowed the media production and studies faculty to significantly revise the curriculum starting this fall. Even first-semester students will be trained in the fundamental operations of the audio and video production studios, which can increase their skills and the amount of time and experience they will have working with new technologies. Because they have earlier and more access to robotic cameras, virtual sets and multiple-dedicated audio and suites, students can develop advanced portfolios to present to prospective employers, Stafford said.

The media effects lab is set up with 25 computers and can be used for small group meetings or as a communication skills lab that will serve students in public speaking courses. Here, students can practice their presentations, record them and receive feedback from instructors.

In addition to the academic programs having fresh, updated and modern space for their classes and work, the student media groups – from BG News and BG 24 to WBGU-FM and Falcon Radio – are huge beneficiaries of the renovations. One of the new spaces beyond the first floor glass walls is the media convergence lab. According to Stafford, the space offers the concept of integrated media, where student media groups come together to discuss topics, content and media formats including podcasts, live news, web, print and radio. The groups will maintain their identities, but the new spaces will facilitate the creation of an overarching “Falcon Media,” Stafford added.

Each of the student media groups has designated spaces near the convergence lab that allow the students to meet, work and prepare for disseminating their news and information in a real-world environment.

The Falcon Forensics and Debate Team also has its own space that showcases the team’s collection of trophies and includes recording capabilities that allow for practice and assessment of team members.

Other student groups specific to the School of Media and Communication, such as the Public Relations Student Society, Society of Professional Journalists, The Key, The Obsidian and Online News Association, have access to meeting spaces within the building.

Several spaces have extensive computer access, including a Mac and a PC lab, to accommodate students in the programs. Additional rooms include conference spaces, faculty and graduate assistants’ offices and lounges, editing suites for students and isolation labs for audio work.

The open-concept Stoddard-O’Neill Lobby, named for a gift from alumnae Karen Stoddard ’90 and Eileen O’Neill ’90, ’14 (Hon.), both BGSU popular culture graduates, provides visual access to many of the first-floor spaces for students, faculty, alumni and visitors. Glass walls allow students and visitors to see work in progress.

The renovation, which is designated as a Leadership in Energy and Environmental Design (LEED) project, also has allowed the school to invite other programs across campus to utilize the space. This fall, the College of Musical Arts is teaching two music production classes in the audio production studio.

The technology and the spaces within the Kuhlin Center are indeed state-of-the-art, said Jay Crawford ’88, ESPN SportsCenter co-host. During his recent visit to campus to deliver a commencement speech, he was able to tour the building. He admitted the Kuhlin Center rivals  ESPN’s studios in Bristol, Conn., and will be a “recruiting magnet.” 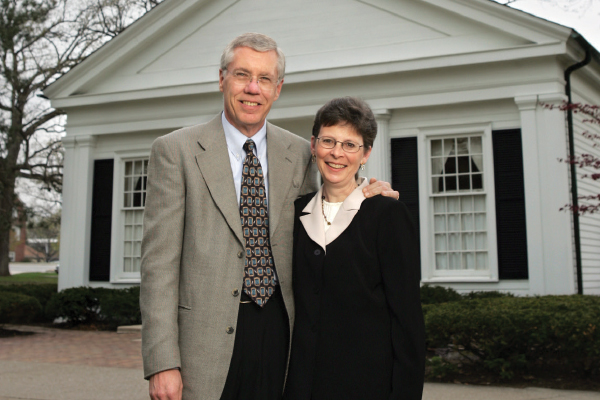 Mike ‘68 and Sara Kuhlin met at BGSU and were married at Prout Chapel. The Falcon Flames celebrated 42 years of marriage before Sara passed away in 2013.

Michael Kuhlin and Sara Rohr met as BGSU students in the late 1960s. Sara attended from 1967 to 1969 and Michael from 1964 to 1968. Mike received a journalism degree in 1968 and went on to a distinguished career in corporate communications with Ameritech, now AT&T, retiring as senior director of corporate communications. Currently, he is associated with Voyage Financial Group, where he leads the firm’s branding, marketing and communications.

He served on the BGSU Foundation, Inc. Board of Directors from 2006-2010 and returned in May to start a new term. He is also currently a member of the Leadership Council for Student Affairs.
As a student, Mike was actively involved in student organizations on campus, including Delta Tau Delta and the BG News, which led to his selection as BGSU’s Outstanding Greek Man in 1968 and membership in the Omicron Delta Kappa national leadership honor society.

Mike and Sara also worked at the University. Sara was employed in the Administration Building and the Office of Financial Aid from 1969 to 1971. Mike worked in the Office of the Dean of Students as a residence hall director and was an assistant director in the Office of Career Planning and Placement from 1968 to 1971. They married on campus, in Prout Chapel, on Dec. 11, 1971. Their 42 years together included many trips back to campus before Sara passed away in 2013.

“In addition to finding each other, the learning and maturing we experienced at BGSU gave us an extraordinary foundation to build our lives,” Mike said.

“We were honored to previously endow and establish the Mike and Sara Kuhlin Scholarship for Exceptional Student Leadership to support students who have distinguished themselves by their involvement in extracurricular activities. This new gift for the building provides a lasting tribute to Sara and everything that BGSU meant to us by supporting a dynamic home for students in media and communications.”

“I am thankful for the generosity of Mike and Sara’s leadership gift for this exciting building renovation,” President Mazey said. “With Mike’s distinguished career in communications, it is fitting that the new facility for the BGSU School of Media and Communication be named the Michael & Sara Kuhlin Center.”