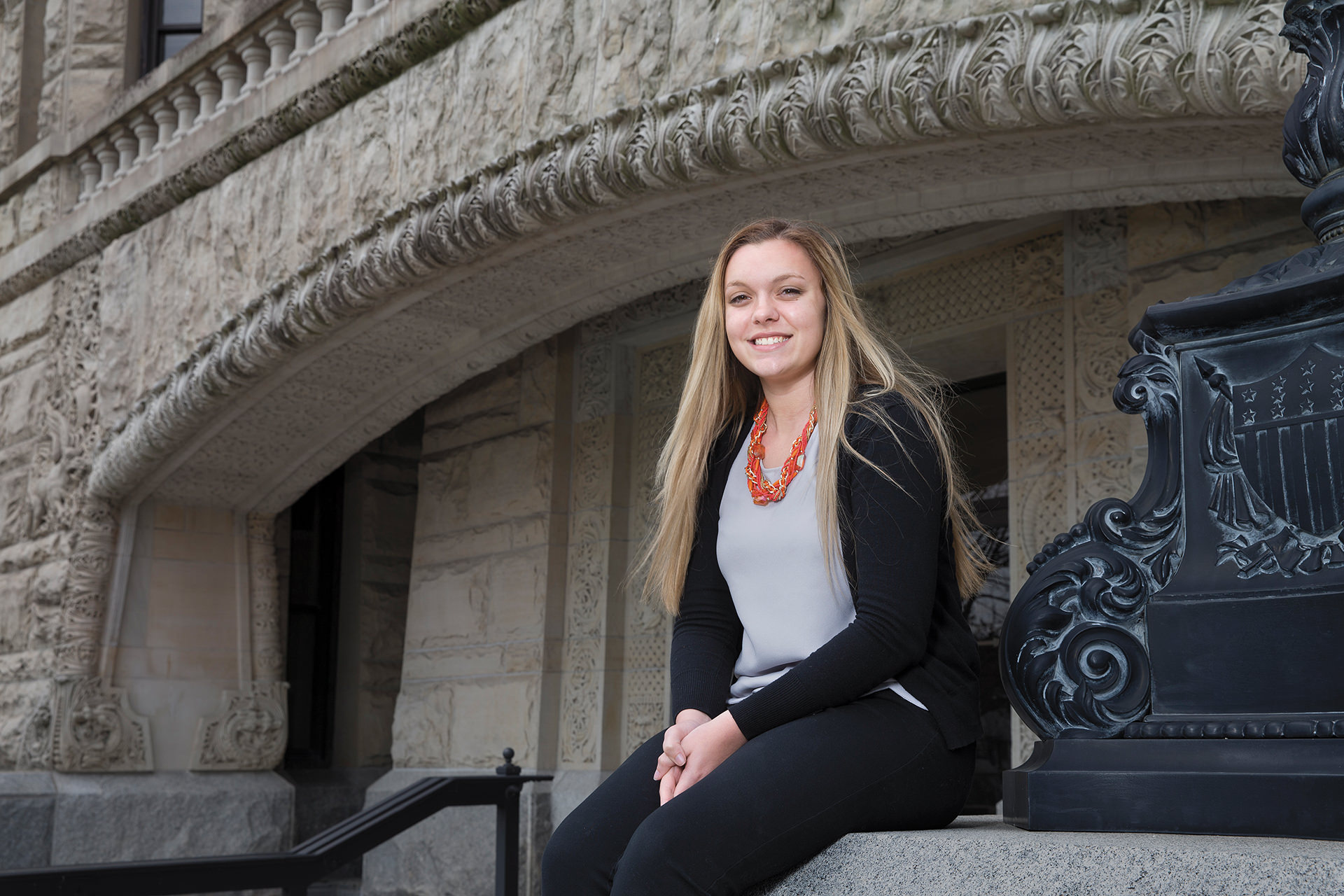 Meg Burrell is a High Achiever

“The people skills I have gained here are so valuable, but understandable, because everyone is so friendly and everyone wants to help you.”

Meg Burrell took advantage of every opportunity afforded her at Bowling Green State University — and then some.

Before the Bluffton, Ohio, native walks across the Stroh Center stage and graduates in May with a bachelor’s degree in political science and a minor in sociology and heads off to law school, Burrell shared some advice with future Falcons.

“Get involved,” she said. “I really think there is something for everybody at BGSU. For me, I found my home here in so many places. If everybody could have their home on campus, I think it makes the experience so much more enjoyable.

“Take the initiative — and that’s true about life — because you’re going to have to take those first steps, but people at this University are so receptive to that. This is the place where  everybody can succeed, and that’s because faculty, alumni and friends of the University are so great and so kind — they are there to lend a hand whenever you need it. When I am an alumna, I’m going to want to come back and see what great things BGSU students are doing.”

Burrell stepped on campus as a Sidney A. Ribeau President’s Leadership Academy (PLA) scholar in July 2014 for the summer bridge program.

The monthlong session turned out to be a crucial starting point for the BGSU freshman.

“I think the PLA’s summer bridge program really was a game-changer,” Burrell said. “From understanding not only where everything is and what campus is like, but it was the first time I had been on my own, so it was a good experience to then go home to Mom and Dad for a little bit before the semester started. Being here for a month, I was able to connect with my cohort members, who turned out to be amazing — I’ve made lifelong friends.”

Each year since 1998, the PLA has enrolled a cohort of 15 to 30 new students who learn servant-leadership. The 2014 PLA cohort, which consists of 20 members, is the first group to have 100
percent retention.

To start her freshman year, Burrell got a job at Student Legal Services (SLS) right off campus and was employed for two years. SLS is a non-profit law office that has served University students since 1984, and typically advises and represents more than 2,000 students each year.

At the end of the year, she applied to be the undergraduate representative on the BGSU Board of Trustees.

“I was already a political science major and I’ve always had an interest in governance and shared governance, but I did not think I was qualified by any means,” said Burrell, whose two-year term ended June 2017. “I just decided to try it and it happened to work out. My interviews kept going really well and they picked me. It was kind of luck in some ways.

“Obviously, it was a unique experience. I learned so much about how BGSU functions and it gave me a deeper love for the University because I’ve seen so much behind the scenes and how much goes into every decision and how many people really care. I also got to connect with donors, which was one of my favorite experiences.”

Working at the Wood County Prosecutor’s office was a way for her to get a foot in the door. The internship was unpaid and the hours were flexible, so it fit her busy schedule. She supported the C.Y.C.L.E. Division, which provides programs in cooperation with youth, community and law enforcement. 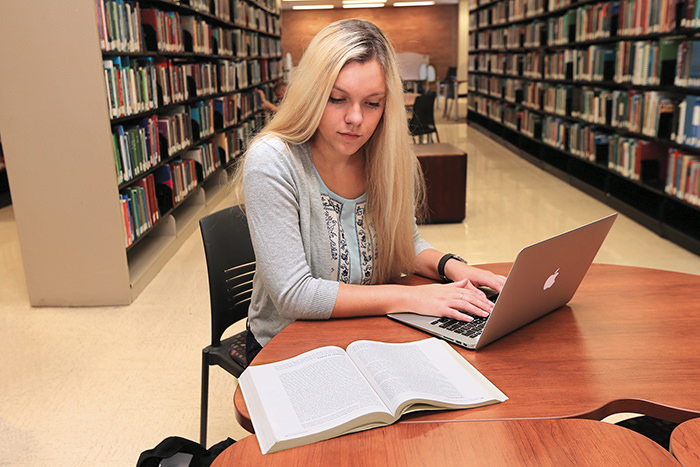 "My motto through college has been ‘apply, apply, apply’ to things I probably had no business applying for, and somehow it works out.”

“It was great to see it firsthand,” Burrell said. “I did that for a year and then I got the Ohio AG internship. I moved to Columbus, which was my first time not living in Bowling Green or Bluffton. I lived there for the summer before my senior year.

“That internship was great because I made a lot of wonderful connections and got to experience a bigger city, a huge office and worked with the other interns and law clerks, which was a great networking opportunity.”

Burrell has interned at BCI during her senior year, continuing the work she started in Columbus, much of which she isn’t permitted to talk about.

“That was a doozy to go through the polygraphs,” said Burrell, referring to the application process for BCI. “Drug tests are no big deal but polygraphs will make you sweat — and I’ve got nothing to hide, but going through the process makes you feel like you have something to hide. I can say that every week, I never know what to expect when I go in the office, and I like that.”

Burrell has taken every opportunity that has come her way, but also has done her due diligence in seeking out those connections, even job-shadowing at the Bowling Green Municipal Court during her final semester.

“I’m still trying to make sure I’m on the right path,” she said. “I’m also a firm believer in education and there aren’t very many scenarios where I would be upset that I furthered my education, so I can’t tell you what I’ll be doing after law school because I’m not sure yet. When I’m filling out my applications and they ask those questions, I say I see myself helping people. There are so many ways to do that with your J.D. — it’s just the next step.”

There have been others who have helped her along the way, too, including BGSU faculty members and even the president. 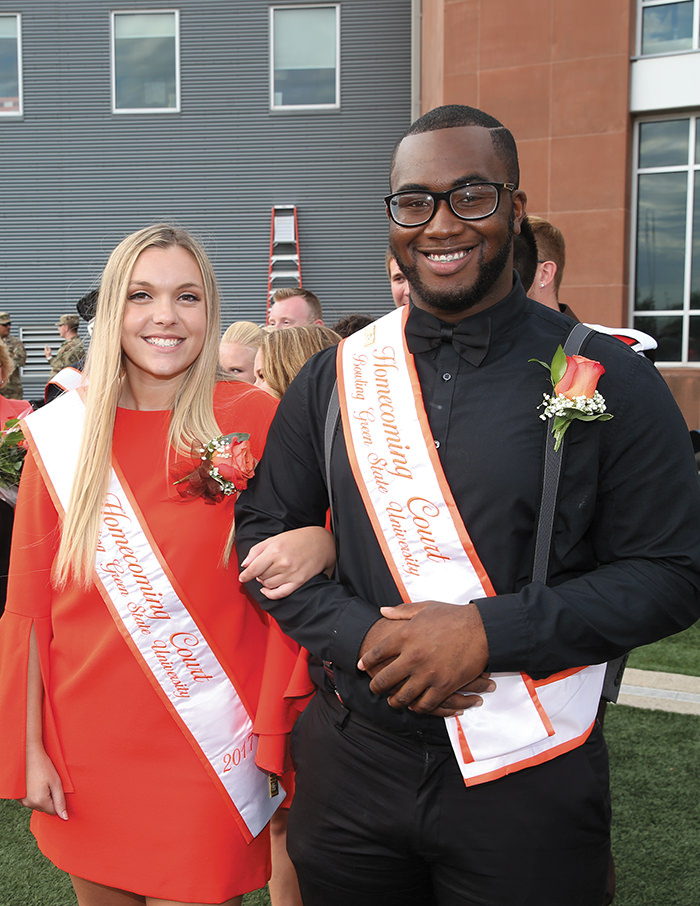 “I wish every student at BGSU could take one of Dr. Melissa Miller’s classes,” Burrell said. “She’s how you hope your professors would be. She cares so much about the material and even more about the students. She’s so accomplished and she’s definitely one I’ll stay in touch with. There are so many here, but, for me, she’s the one who stands out the most.”

In May 2017, then- BGSU President Mary Ellen Mazey appointed a Task Force on Sexual Assault comprised of students, faculty, staff and a victim advocate to address concerns about sexual assault and criminal misconduct. Burrell was one of the students selected to the task force, which she was honored to participate.

“When I look back on my time at BGSU, that’s going to be my proudest moment,” she said. “I’m really proud of the University for starting the task force, and the work done was amazing. The committee was great. The fact that we took those steps was such an improvement for the University. It was hard for me because we did it over the summer and I was living in Columbus, so I had to take off work every week and drive back to Bowling Green. But it was worth it and I would do it again — it was really impactful.”

She was affiliated with BGSU Votes and the student conduct committee and was active in in the Alpha Phi Sorority and she also was on the 2017 Homecoming Court.

How was she able to fit all of those activities and experiential learning opportunities into her schedule?

“I always think, the more you have on your plate, the more you get done,” said Burrell, who also was a Newman Civic Fellow. “If you’re involved in things you’re passionate about, you’re going to make the time.

“Internships are really hard when they are unpaid, so I worked a part-time job and an internship every step of the way through college because in order to take the part-time internship I had to have the other part-time job that did pay. It’s hard, but it’s so worth it. Once you get your foot in the door, it’s easier. Employers want to see what experience you have. My motto through college has been ‘apply, apply, apply’ to things I probably had no business applying
for, and somehow it works out.” 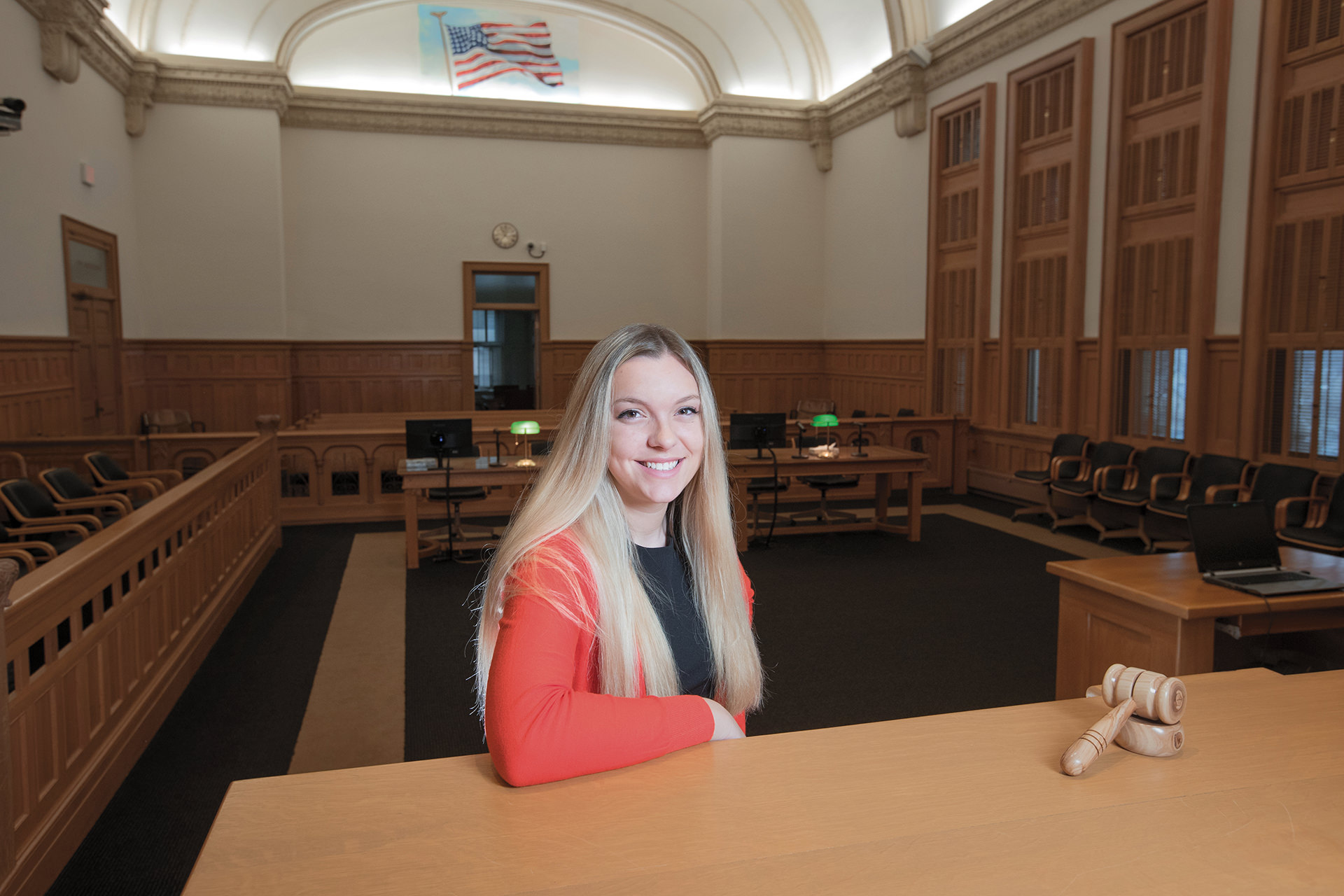 "I had a job in the legal office on campus, I had an internship at the county prosecutor’s office steps from campus and now I am at the BCI on campus. That’s three huge steppingstones right here that I didn’t have to leave to get the experiences that I needed. You don’t have to leave because Bowling Green does have it all.”

Now that Burrell’s time at BGSU is winding down, she can’t believe how much her education — and her life — has been transformed by her experiences the last four years.

“The people skills I have gained here are so valuable, but understandable, because everyone is so friendly and everyone wants to help you,” she said. “So many people have had an impact on my education. I would also say confidence. I’ve had so many opportunities at BGSU that I’m leaving here knowing that I can do it and that I’m prepared inside and outside the classroom. My experiences at BGSU have prepared me for the rest of my life.”

Burrell always will remember her BGSU roots, especially because she knows the University can do for others what it has done for her.

“I preach the BGSU word,” she said. “I’m always recruiting people to go here — even my brother goes here now — because I think BGSU changes people’s lives. Everybody has to find their own fit, but so many people will find that fit at BGSU. I would choose it again every day. 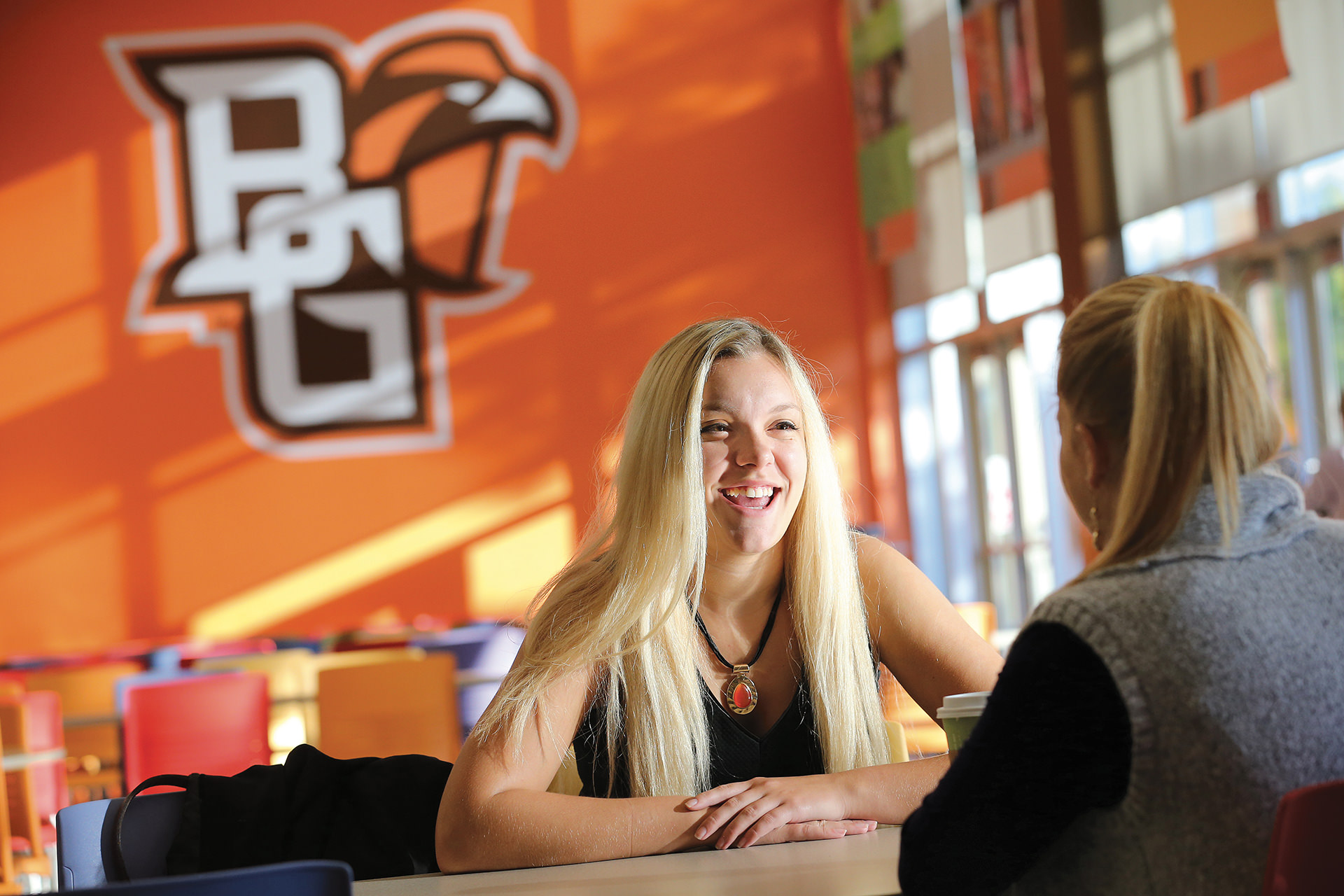