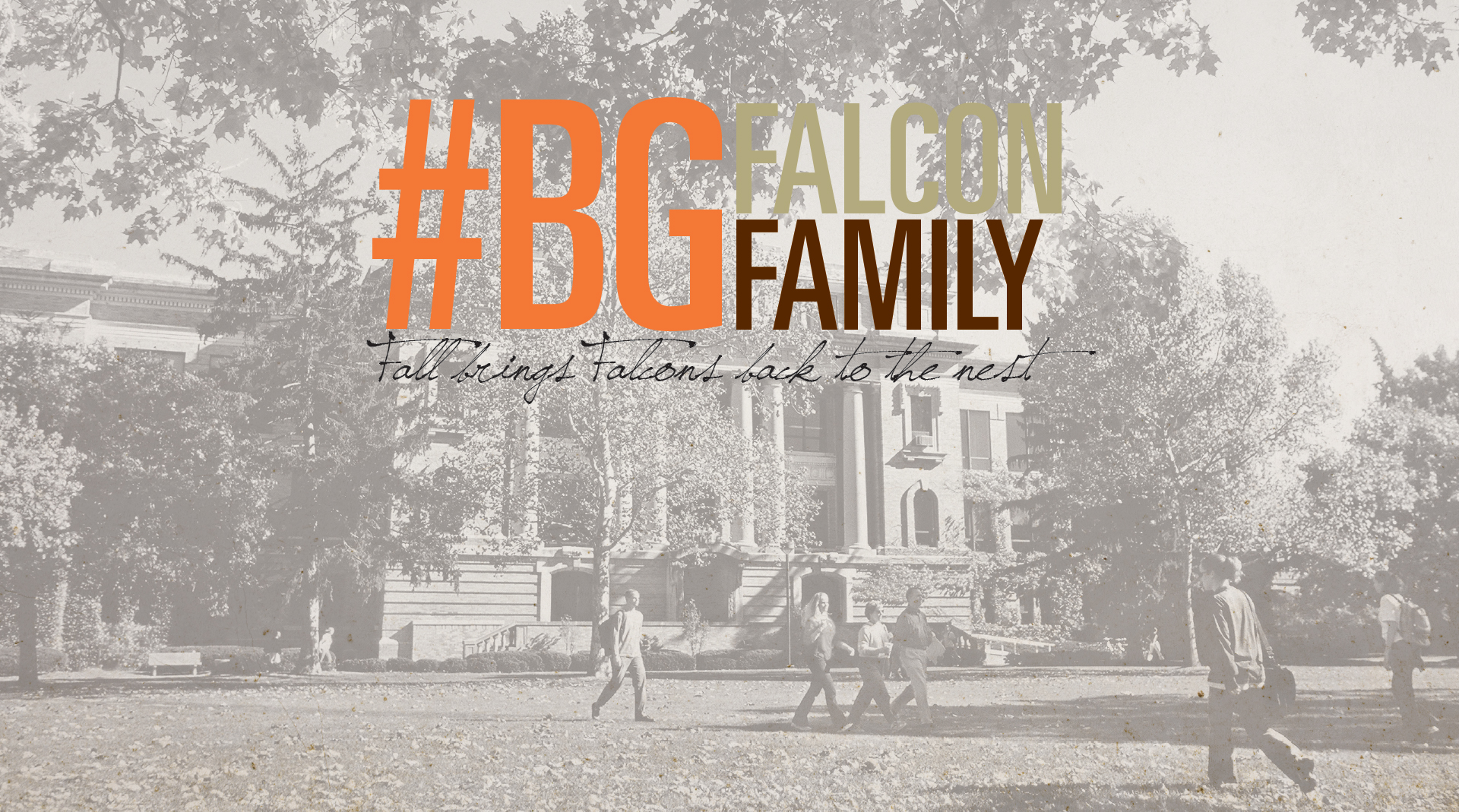 From Homecoming, the Academy of Distinguished Alumni and the Celebration of Philanthropy to Family Weekend, Falcons near and far came home to the BG Falcon Family this fall. Distance was no matter as loyal Falcons traveled to campus and alumni and athletic events across the country.

Follow BGSU and the Alumni Association on Facebook and Twitter for more opportunities to stay connected. Share your BG Falcon Family photos and stories via any social media with the #BGFalconFamily hashtag or email us your story at falconfamily@bgsu.edu. Once a Falcon, Always a Falcon! 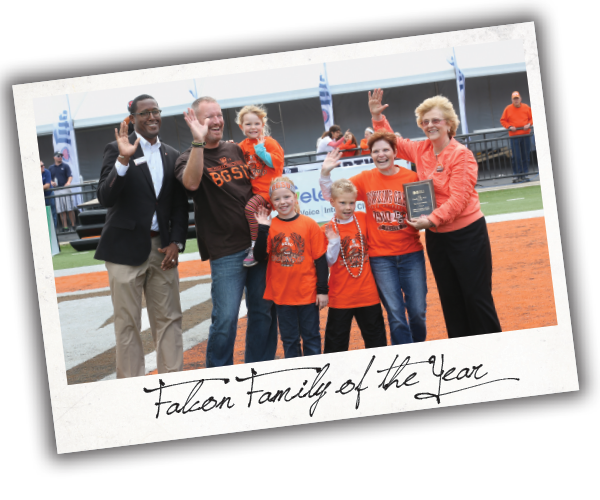 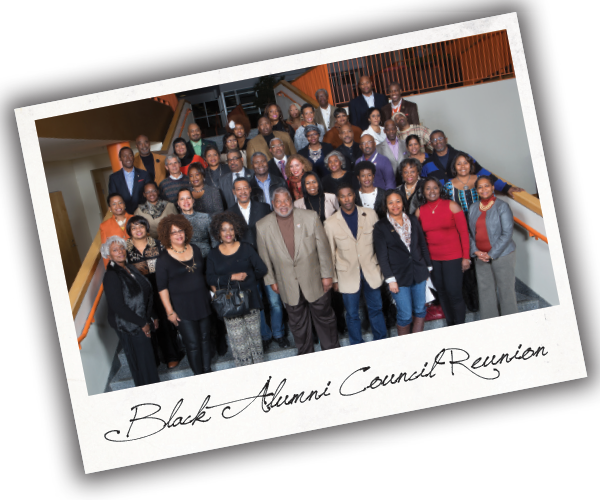 Falcon Family of the Year

The Yarger family was chosen as the 2015 Falcon Family of the Year, an honor presented to them at the Sept. 19 home football game, during Falcon Family Weekend.

Melanie Yarger is a nontraditional student who is working toward completing her studies for her Bachelor of Applied Health degree in December 2015. Her journey began many years ago at Northwest State Community College. She then moved on to Ohio University, but had to withdraw to take care of her mother, who was fighting cancer. Yarger returned home to nurse her mother back to health, and put her dream of a college degree on the back burner, she thought, for good.

She began working, met her husband, Curt, and they started a family. With Curt’s return and retirement from the Navy after 24 years of service, he transferred his GI benefits to his wife — a chance for Yarger to go back to school. Yarger attended Rhodes College and received her associate degree in applied science. Then, after a visit to the BGSU campus, where she said she fell in love with the University, she enrolled and began her journey to complete her bachelor’s degree.

“It took my entire family for me to achieve this goal — my husband and children, my mother and my in-laws, who offered babysitting, errand running, hand-holding and undying moral support,” she said. 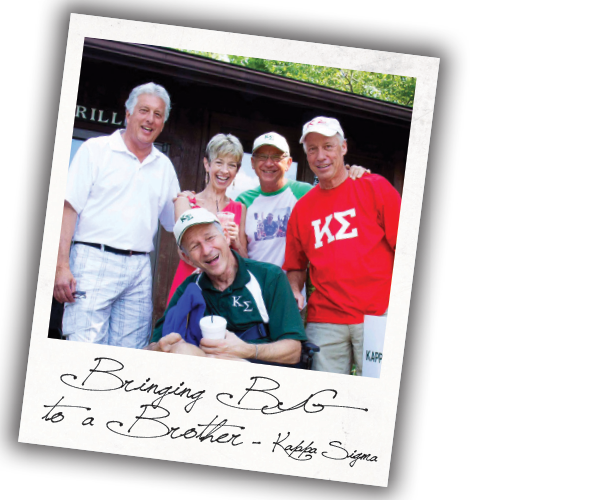 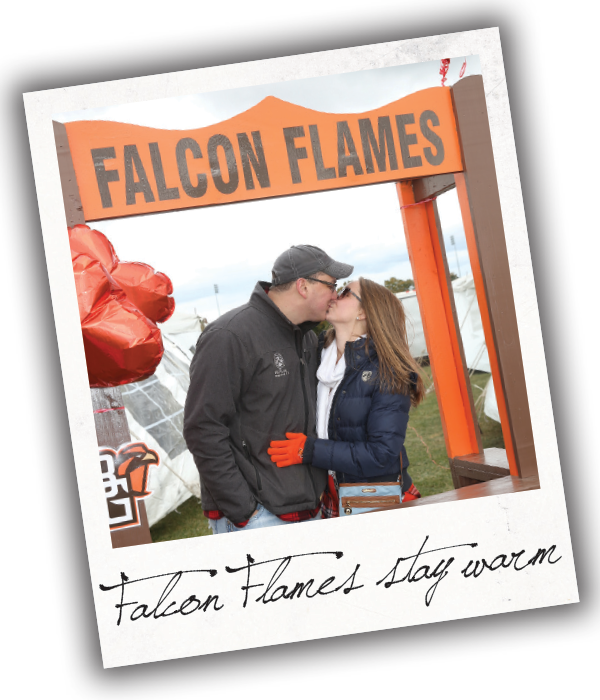 Eight years ago, brothers of BGSU’s Kappa Sigma from 1971-76 got together for a golf tournament and a barbecue in the Cleveland area. It turned into a yearly tradition, meeting on the third Saturday in July at the home of Garry Miller ’74. This summer, the brothers took the gathering to Steve Breit ’74 who was unable to travel due to an ALS diagnosis. The reunion was the largest so far and the brothers also raised money for Breit’s whole family to attend.

“We are just a very close-knit group,” Miller said. “We felt this was the year to bring the reunion to Steve because we know how much he enjoys being with us. We just thought we want him to share in this because this might be the last time he’s able to do it.” 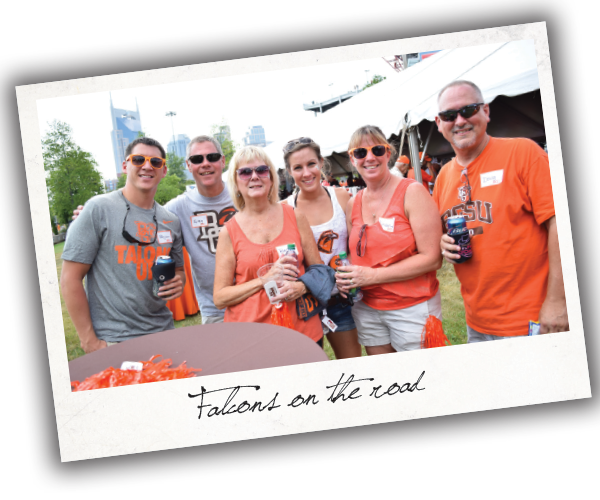 Falcons on the Road

Almost 800 Falcon fans cheered on our student-athletes at the football season opener at Tennessee, and another 300 joined fellow Falcons in Maryland. Go Falcons! 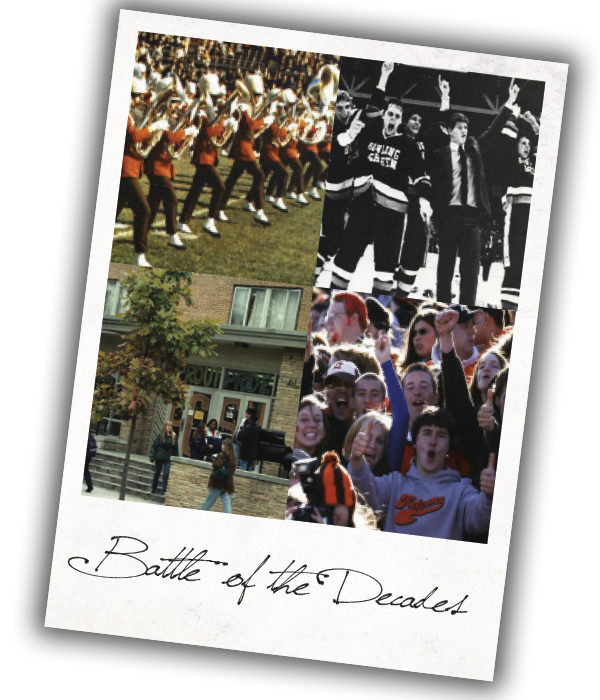 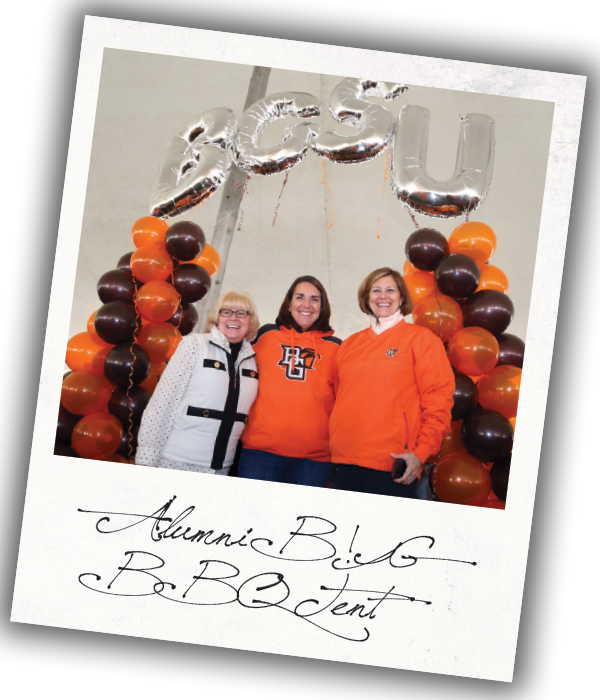 Battle of the Decades

Alumni from the 1980s won the new Homecoming Battle of the Decades by raising more than $12,000 in an online giving challenge. The challenge pitted graduates from the 1970s, 1980s, 1990s, 2000s and 2010s against one another to raise money for BGSU student support as measured through BGSU’s new “Falcon Funded” website. In addition, an anonymous donor made a $10 donation for each alumnus or alumna who made a first-time gift to BGSU.

“While the 1980’s won the battle, the real winners are our students who will benefit from the generous gifts from alumni across all decades,” said David Glass ’78, who serves on the Alumni Association Board of Directors and led the efforts for his decade by reaching out to fellow alumni through video and social media channels. 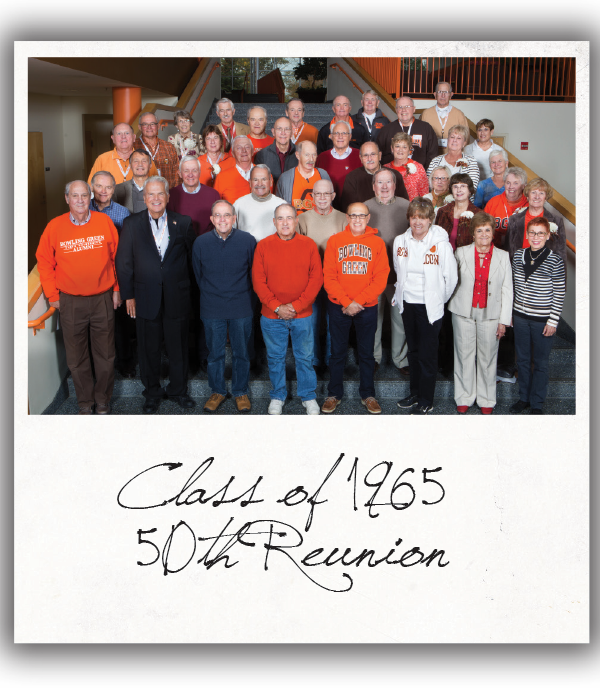 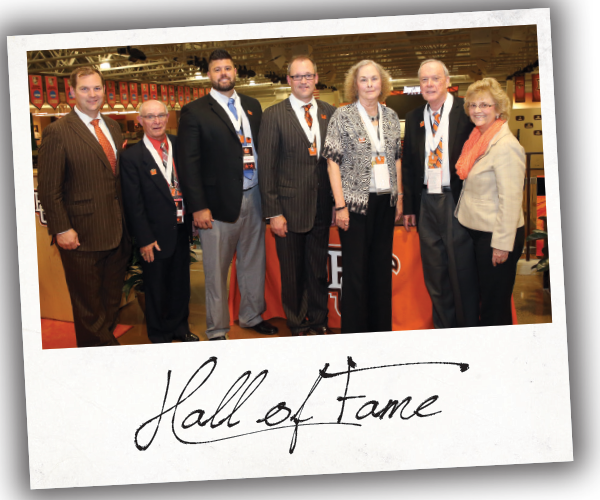 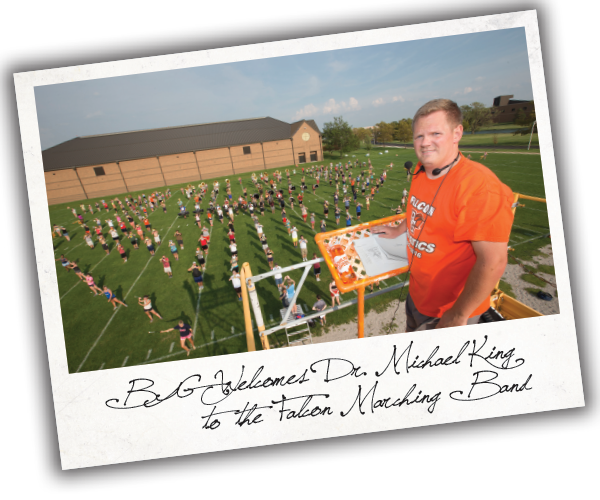 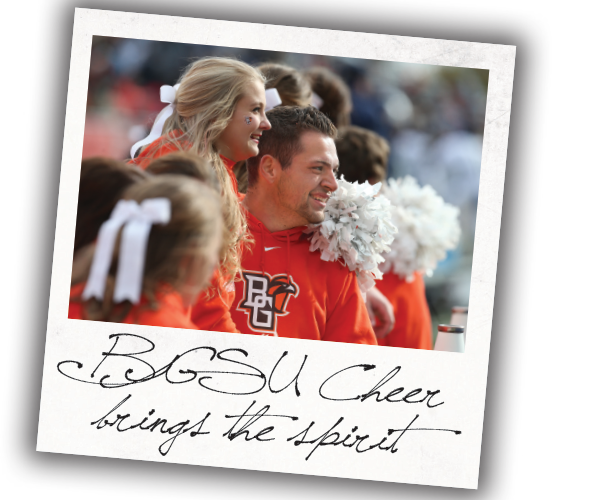 One of the newest members of the Falcon Family is Falcon Marching Band Director Dr. Michael King. At 259 members, the band is one of the largest student organizations on campus and is a showcase for the finest in musical and visual performance, as well as a centerpiece for athletic spirit. 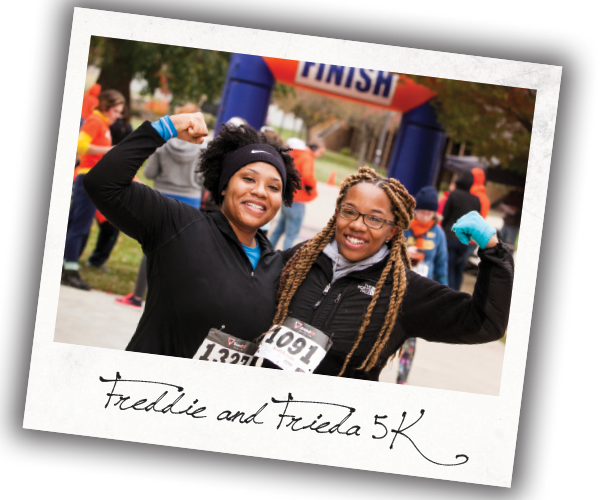 Victorious finish at the Freddie and Frieda 5K Fun Run/Walk! 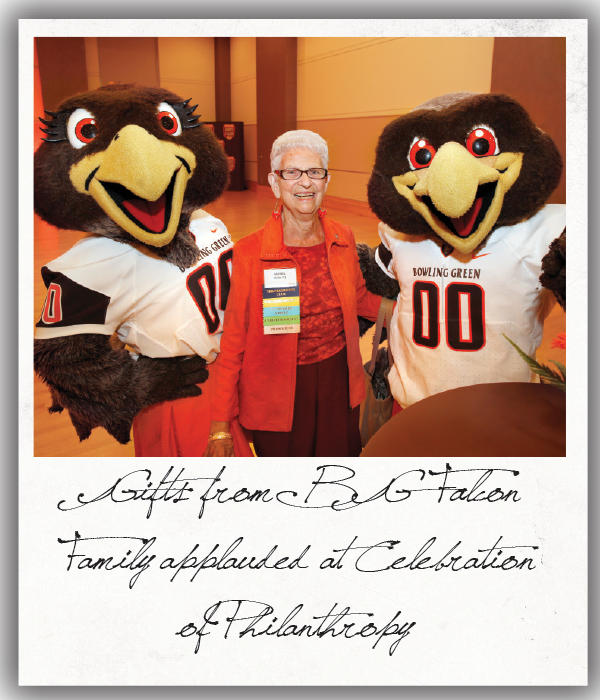 Gift from BG Falcon Family applauded at Celebration of Philanthropy

A loyal BGSU supporter, Muriel Strebe ’51 celebrated her membership in the Williams Society of The Presidents Club, Leadership Circle, Carillon Society and 1910 Society with Freddie and Frieda at the inaugural Celebration of Philanthropy event in September 2015. 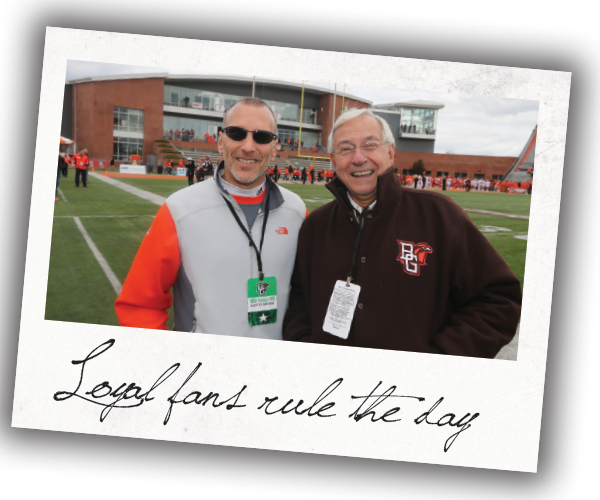 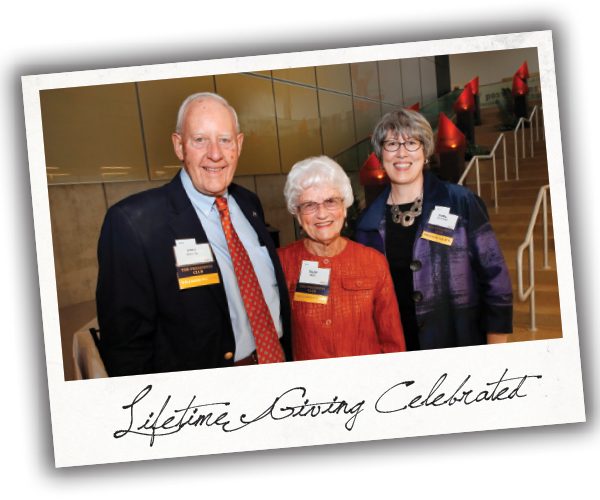 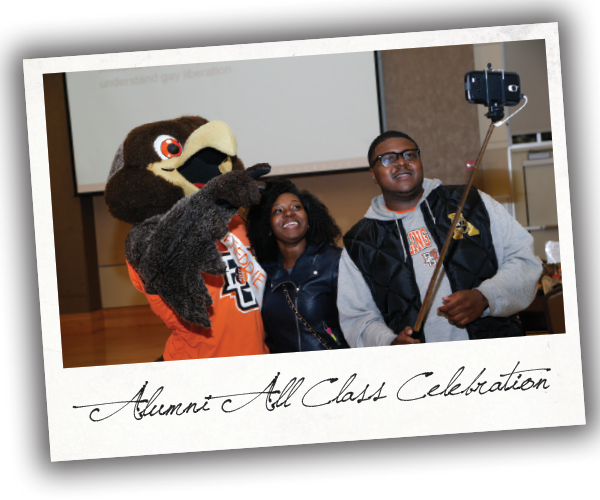 Donors with lifetime giving of $15,000 or more were honored in September at the annual Donor Recognition Event as members of The Presidents Club. The evening included video tributes to nine donors who were welcomed into the Williams Society for the distinction of lifetime giving of $1 million or more. From left to right: Williams Society members Larry ’56 and Tricia Miles, and Katherine Kreuchauf, president of the Findlay-Hancock County Community Foundation that manages the historic estate gift from Bill Frack for support of BGSU men’s basketball. 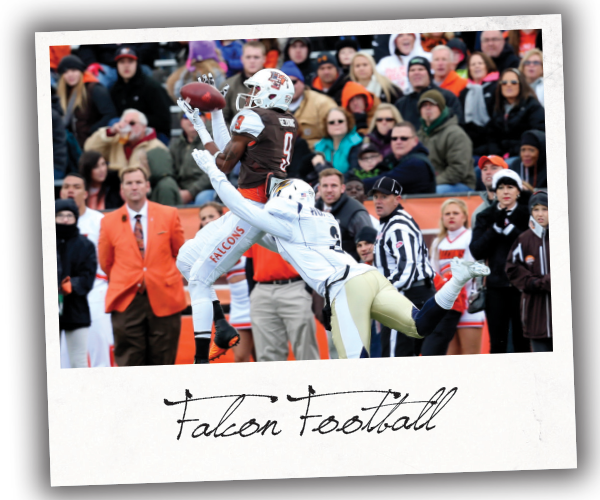 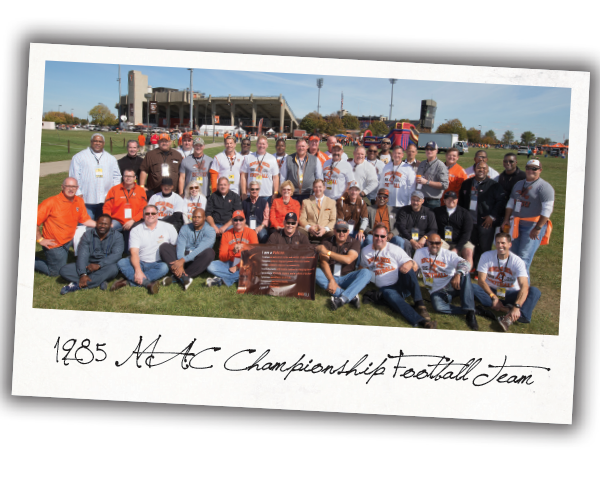 The 1985 MAC championship football team returned to campus for a reunion and were honored with an on-field recognition. 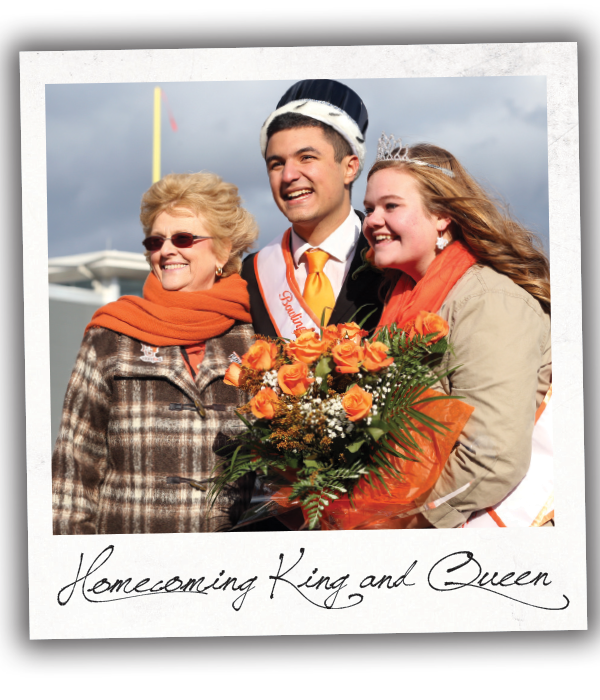