The 2021 Hatch a Great Success

On April 22, 10 student and alumni entrepreneurs, fondly known as Hatchlings, pitched their business ideas to five Schmidthorst College of Business alumni investors (Bethany Bryant, Emanuele Conti, Joseph Fisch Jr., George Heath and Mark West) at the ninth annual Hatch. During the last eight years, more than $800,000 has been committed to Hatchlings to start their businesses. The Hatch, modeled after the hit television show “Shark Tank,” is one of the most highly anticipated events at Bowling Green State University.

This year marked another special Hatch. Due to COVID-19, this was the second virtual Hatch. Hatchlings gave their pre-recorded pitches to investors and then interacted with them live from the Maurer Center while the audience watched through a livestream. A large group of students, alumni and friends to the college and Hatchlings participated on the “Ziggy Wall” as virtual audience members. 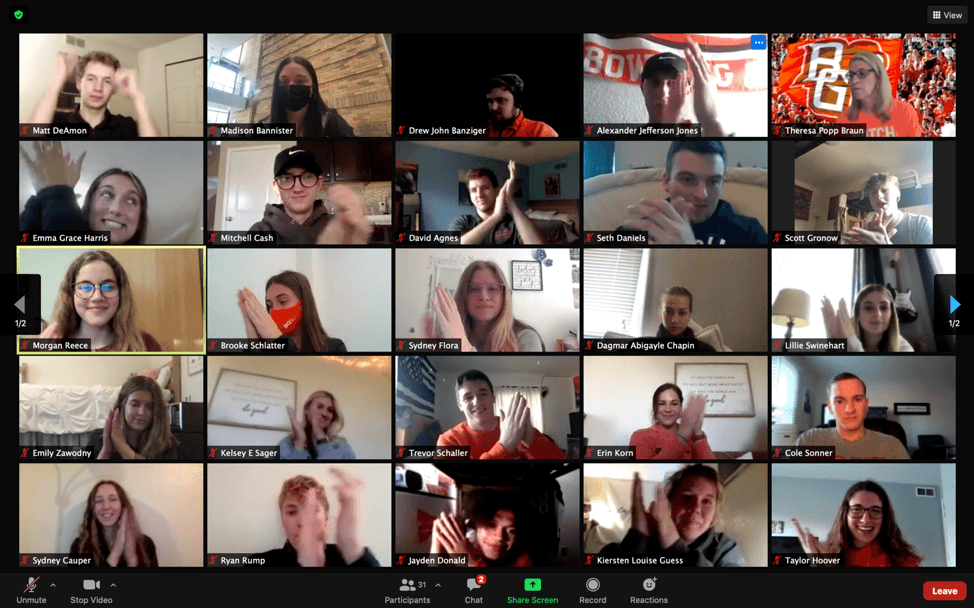 Please read below for a summary of the outcomes of the Hatchling’s pitches.

Blackett created Touch Color to empower visually impaired and colorblind people. With 285 million visually impaired people in the world, and an estimated 11 million of those being colorblind, Blackett sees a wide market and high demand for his business idea.

Touch Color is an app that uses camera recognition software to recognize color on clothing and even recommend colors to go with a particular outfit or piece of clothing. Touch Color also creates a virtual closet that stores all of a person’s saved clothing to use later on and even makes recommendations for online shopping based off of their existing wardrobe.

Blackett asked for a $5,000 investment for 5% equity and was funded for incubation by the investors.

Greve’s business idea, Crank-Savr Technology, is aimed to stop fishermen from losing their fishing lures. About $2.2 billion per year in America is spent on fishing lures, so Greve hoped to help solve the problem of constantly spending more money on new lures.

Crank-Savr Technology gets inserted into the body of the lure and gives the fisherman the capability to pull it back from water. A cartridge helps to set the distinction between when a fish is on the hook and when the fisherman simply wants to bring back the lure.

Concerned about the difficulty of the design and lack of industry knowledge, the investors decided to pass on Greve’s idea.

Stockham hopes to alleviate the cost of hearing aid repairs with her business idea, Hear to Help. This would be a cheaper alternative to other ways of fixing hearing aids by being only 20% of the cost of current methods. Stockham plans to kick off her idea through licensing with bigger companies. Her idea stands apart from competitors’ because Hear to Help will do a casting design to create multiple points of contact behind the ear, allowing for an easier and more comfortable user experience.

Asking for $5,000 for 5% equity, Stockham was funded by the investors and will move on to incubation. She also received the Eggy Award, given to the business idea that was voted as the fan favorite.

Mahl, who mows lawns in the summer when not attending BGSU, noticed the problem of always having objects in the way of the mower, whether it be trash or rocks. His idea, Green Sweeper, would be a solution to this issue.

Green Sweeper is an attachment to a riding lawn mower. It would be placed at the front of the mower and contain tines that could be lowered and raised by the operator of the mower as needed. When the tines pick up objects in the way, they would then place them in a storage bag on the mower to be removed and emptied later. Mahl also did research with current mowing companies who said they could see this product on all of their equipment.

Mahl asked for $5,000 with 5% equity and did receive funding from the investors for Green Sweeper.

Slemmons’ product, SimpleFinder, helps people to find lost objects around their house. The product itself is about the size of a remote and can even be attached to a wall mount. SimpleFinder uses Bluetooth low energy to keep the product from interrupting the signals on other electronic household items.

Slemmons aims to make this product simple and easy to use. Since it doesn’t require WiFi or use GPS like his competitors’ products, SimpleFinder’s target market would be less tech savvy users. All users would need to do is place quarter-sized stickers on objects like their wallets, keys, phones, etc. and by pressing the button on the SimpleFinder remote, a vibration and ping would be set off on the stickered objects to alert the user of their location.

Slemmons asked for a $25,000 investment with 5% equity. While not all the investors could agree to go in on this business idea, one investor, Mark West, decided to fund Slemmons with $7,500 on the condition that he could get the adhesive stickers patented.

Schulze and Greenwell wanted to change the game for manual wheelchair users in cold weather with their business idea, Wheely Warmers. Wheely Warmers are protective covers that are put over the cool metal of wheelchair wheels to protect a user’s hands.

When doing market research, Schulze and Greenwell identified three main problems that manual wheelchair users had in winter months: slippery rims, cold hands and loss of traction. Wheely Warmers aims to provide a solution for all of these things.

Investors decided to pass on Wheely Warmers but encourage Schulze and Greenwell to keep working on their idea.

Literally is the only product to include all of these elements into one story. All competitors are either multilingual or aided by music. Literally has both. Gómez-Estévez himself is very knowledgeable in this field. He is currently a doctoral student at BGSU who is studying the relationship between music and children’s literacy. Not only is he creating a product, he’s also studying the theoretical framework behind it. Gómez-Estévez even showed a possible children’s book as an example at The Hatch.

Asking for $5,000 for 5% equity, Gómez-Estévez was funded by investors and is moving on to incubation.

Tressel, a long-time graduate of BGSU, is already in the midst of launching his business idea, TOOLing Around Tool Caddy. This caddy attaches to compact and subcompact tractors to prevents users from having to make multiple trips for all of their tools or deal with the hassle of tools being in their way.

Tressel launched this tool caddy last month and has seen huge success with it. In fact, he already has a purchase order from one company for over 300 units. However, Tressel hopes to create a line of these products, ranging from caddies for wheelbarrows to utility mowers. His patent for these products is in the final review stage.

Investors decided to pass on Tressel’s pitch, however, investor Mark West offered to reach out to his network with experience in the gardening industry to help Tressel get his business idea funded.

Thomas’s business idea, Ruff and Rugged, is a dog collar that promises durability without compromising the comfort of the dog wearing it. Thomas observed on his own dog that collars could be irritating and cause sensitive patches, hot spots, on the skin around the collar area. When trying different products, Thomas found them to either be durable but hard on the skin, or sensitive to the skin but not robust.

Ruff and Rugged collars would be both, by being made of both Nylon rope on the inside and then Neoprene (a similar fabric to what scuba divers wear) covering the outside of the color.

Worried about the competition and market demand of the product, investors decided to pass on Thomas’s business idea.

Kirk Kern, Director of the Paul J. Hooker Center for Entrepreneurial Leadership, noted that this was one of the most exciting Hatch events in the last nine years. “Our Hatchlings did an outstanding job of presenting their business ideas,” said Kern. “The mentors successfully prepared them for their presentations and the investors were engaged and enthusiastic about these new business ventures.”