The spirit of entrepreneurship was evident during Entrepreneurship Week (E-Week) as thousands gathered for a variety of outstanding events. The week kicked off with a breakfast featuring Jamie Zulch, owner of Jamie's Seams to Fit & The Formal Detail, who discussed her small business startup.

Following breakfast on Monday was the first Lunch & Learn with Dr. Gene Poor, Hamilton Professor of Entrepreneurship, who presented the topic "Money: Find out about FFF (Family, Friends, & Fools).” J. Robert Sebo ’58, ’13 (Hon) also gave his insight on being an entrepreneur and finding funds for startups. 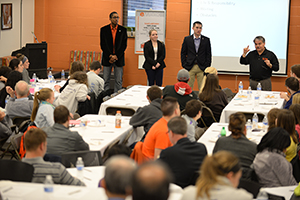 On Tuesday, the Lunch & Learn featured three of the 2014 Hatchlings who received investor support - Jerrod Witt, Morgan Smith, and Loren Branch – who shared their "Start-ups & Down."   Witt founded AudiblEye which is a smartphone app for visually impaired people and provides verbal descriptions of precise locations within buildings.  The senior marketing student announced he had just received approval for his first installation in BGSU’s Business Administration Building as a test site to collect data.

Smith, a sophomore marketing student, is the founder of UMAT, a non-invasive, universal app for washers and dryers on college campuses to notify people of availability or how much time remains on each machine. She is currently working with a tech partner on campus to finalize a prototype.

Branch is a senior sports management student who founded Vital Apparel, a clothing brand focused on giving back to his hometown of Detroit.  He plans to sell his specially designed t-shirts and crew neck sweatshirts online with 10% of every sale going to charities or inner city organizations that help young people in Detroit.

Wednesday’s Lunch and Learn featured BGSU alumnus Bob Battaglia '60, the Entrepreneur-in-Residence for E-Week, who talked about his entrepreneurial journey that led him to six successful business launches, including a pasta company, Fettuccine Bros., which he sold to Kraft, Inc. who changed the name to DiGiorno. His last startup, One Legal (formerly known as Fax & File Legal Services, Inc.), was the first to file an electronically transmitted (faxed) court document with a state court.

The 2015 Hatchlings had the opportunity to practice their pitches on Monday and Tuesday evenings in front of an audience in preparation for the live Hatch event on Wednesday evening. The Hatch™ was attended by thousands of cheering fans in BGSU’s Stroh Center.

Thursday night was the Dallas-Hamilton Entrepreneurial Hall of Fame induction ceremony with the Class of 2015 alumni honored for their outstanding innovative achievements.

E-Week concluded with the sold-out Sebo Series in Entrepreneurship attended by students, faculty, alumni, and the BGSU and business communities. The founder of Monster.com, Jeffrey Taylor, was the keynote and this year’s theme was “Disruptive Forces in Business.”  (Read more…) This event has been sponsored since its inception by J. Robert Sebo ’58, ’13 (Hon.).

The College of Business and the Dallas-Hamilton Center for Entrepreneurial Leadership co-host the E-week events. BGSU is known for its strong focus on entrepreneurship and is ranked #51 in the country for its entrepreneurial programs by Bloomberg Businessweek.