Alumnus “Powers” His Career to Executive Role at Energizer 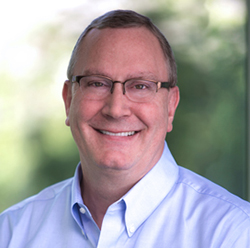 The iconic mascot of Energizer batteries is the Energizer Bunny™ that “keeps going and going and going.” That can describe the energy-filled supply chain career of Greg Kinder ’83 whose positions have taken him around the globe millions of miles. Currently, he is Energizer’s executive vice president and chief supply chain officer and is a member of the Executive Committee.

The illustrious career of Kinder began in 1983 when he graduated from BGSU with a business degree and dual majors in procurement and materials management & production operations management. He immediately went to work for Johnson Controls (JCI) and remained there for over 22 years.

What this 30+ year supply chain veteran sees in his field for the future is revolutionary. “Machine learning and AI (artificial intelligence) will likely revolutionize demand forecasting,” states Kinder. “Automation and robotics will be increasingly used in warehouses and distribution centers. We could see a heavy investment in driverless trucks because of the impact of driver shortages in the U.S. and Europe.”

His college experience in the College of Business provided the foundation that helped him launch his career. “My BGSU experience directly correlates with my professional success. The case studies in class taught me how to collaborate and work as a team. Problem solving and critical thinking skills were also emphasized.”

What Kinder also developed at BGSU was his tireless work ethic because he had to pay his own tuition and didn’t want student loan debt. He balanced multiple jobs at the same time and worked up to 30 hours per week, but still found time to play sports through church leagues and intramurals. He says it was his ability to juggle academics, work, and sports that impressed employers at graduation.

Kinder’s favorite and most memorable BGSU professor is Dr. Chan Hahn, Faculty Emeritus in Procurement and Production Operations and a Distinguished Teaching Professor.  “I was an accounting major up through my junior year and took a summer class in procurement recommended by a fraternity brother. The class changed my major, and ultimately my career path and life experiences.” 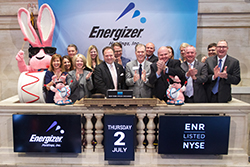 Several accomplishments that he is most proud of include his ability to apply his global experience and talents and win at business across four unique industries and in diverse geographies; serving on the Executive Committee of Energizer, having involvement running the company; and participating in ringing the opening bell at the New York Stock Exchange in July 2015 when Energizer was spun off and became an independent, publicly traded company.

Lastly, Kinder is proud of the support of his wife, Amy (Harrison) Kinder, a 1985 BGSU graduate, because his career required extensive travel. Kinder fondly notes that he and his Falcon Flame celebrated 25 years of marriage in 2017.

Kinder concludes, “I have always had a tireless work ethic enabling me to be a high performer. My current position at Energizer is the culmination of everything that I’ve learned and done – like a final exam. A key part of my job is talent management - identifying and developing our next generation leaders.”