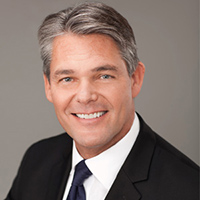 “Even in college I knew what I wanted to be someday - to manage a huge procurement team, be a chief procurement officer at a Fortune 100-type company, but I also had a keen eye toward construction, and wanted to leave a mark on the world.” These words describe the aspirations of David Hammerle, a 1982 BGSU graduate who earned a degree in Procurement and Materials Management, and Production and Operations Management. His determination to achieve is leaving a mark on the world through his highly successful 35+ year career.

Hammerle not only obtained his dream job at a large corporation, running an extensive procurement team for nine years, but in August, he was selected to lead an entire company - Bechtel Equipment Operations (BEO), a subsidiary of Bechtel Group, Inc. Bechtel is a global construction giant which is one of the largest private companies in the U.S., according to Fortune.

As a subsidiary of the construction giant, BEO provides equipment, tools, scaffolding, rigging, and expertise for their global projects. According to Hammerle, it includes the “consumables and personnel protective equipment, and unique technology such as Unmanned Aerial Systems, also known as drones.” BEO is headquartered in Sugar Land, Texas, and has small satellite offices that serve regional projects in Canada, Chile, Peru, Indonesia, Australia, and Singapore. 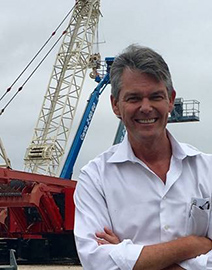 The BGSU graduate’s ambitious climb to the top came with sacrifices, however. “I took on increasingly more challenging roles,” states Hammerle. “I moved 13 times, spent a year in the Middle East desert managing a large project, and spent a few assignments away from my family. I’ve been all over the world, from Poland to Medan, Indonesia, to China, the Middle East, and most of Europe, but the rewards were worth it. It allowed me to provide for my family.”

His wife, Mary Ann, is also a BGSU graduate and Hammerle states that her career as a Registered Dietitian provided flexibility to move to various locations before running a home-based business while raising children.

When asked how the College of Business prepared him for his executive role, Hammerle states that the knowledge he learned in his business classes served as a good foundation. “End-to-end supply chain education was the basis; the learnings were very much in line with reality. In fact, I still have my textbooks and they are relevant today.” He adds that even though technology may do more of the work, the steps in the supply chain still need to be performed for best results.

Hammerle also benefitted from good management professors.  “They went out of their way to guide us on things to do to stay up to date in our profession, what it means to work smart, and the impact of having a strong work ethic. These are things that proved to help me when I was charging hard to advance my career.”

Dr. Chan Hahn, Dr. Peter Pinto, and Dr. Dan Bragg were his most influential professors. “All were academic leaders in their space. And today they are still revered for their work in the academic circles.”

What also helped Hammerle in his career was being vice-president of the Management Club while in college. Being part of that student organization allowed him to engage with companies that came to campus. That networking “provided for better access to those companies,” states Hammerle, “and that’s how I feel I got my first job, sitting next to the VP of a very large construction company at a dinner that I organized.”

Hammerle still stays connected with his alma mater through his company’s membership in the BGSU Supply Chain Management Institute (SCMI). He returns to campus for SCMI events to pay it forward. This successful executive looks forward to networking with current supply chain students and sharing his expertise.

After decades of success in the supply chain industry, the BGSU alumnus describes which skills are the most important for new business graduates. “Know the academic teachings, the bookwork; it’s real and it’s relevant. Soft skills are important, such as negotiation, enthusiasm, the ability to give presentations, dressing for success, and human relations skills such as remembering names and communicating face-to-face.  Finally, networking is a huge part of success.”