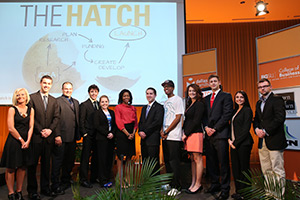 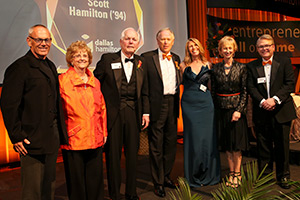 The 2014 E-Week was packed with events to celebrate the spirit of entrepreneurship. New entrepreneurs, seasoned entrepreneurs, and rising entrepreneurs were part of this celebration. The week kicked off with a breakfast featuring one of the 2013 Hatchlings who received funding for her start-up, Cribs on Campus. This was followed by daily lunch and learns featuring panels discussing topics ranging from legal to financial considerations when considering a startup.

Four world-class innovators were honored for their successful achievements - Earle Malm ’71, Valerie Newell ’75, Lori Steele-Contorer ’86, and Kermit Stroh ’02 (Hon.).  These alumni were inducted into the Dallas-Hamilton Entrepreneurial Hall of Fame, joining 30 prior inductees.

More than 1,300 people gathered in the Bowen-Thompson Student Union to cheer on twelve aspiring student entrepreneurs during the second annual “Hatch” on April 9 as they pitched their business ideas to a panel of six investors.  The College of Business and the Dallas-Hamilton Center for Entrepreneurship are proud to announce that 10 of the finalists received some level of funding from the investors.

Loren Branch, a junior sports management major in the College of Education and Human Development – pocket t-shirts with specially-created art designs, with partial proceeds supporting youth programs in his hometown of Detroit

Alan Eschweiler, a sophomore finance student -  a sales notification mobile app connecting customers to products based on their proximity to a retail location

Caitlin Flack, a fourth-year student in the College of Arts and Sciences specializing in public relations and minoring in marketing -  a shopping cart charger for your cell phone

Taylor Frazer, a sophomore business student specializing in management – a special highlighter with ink that disappears over time for use in textbooks

Stefan Grdic, a senior in the College of Health and Human Services - interchangeable gloves that attach to coats that can be used in various snow sports

Sara Scacchi, a freshman specializing in marketing - a lightweight, protective glove to prevent smudges while artists are drawing. Sara also was voted the People’s Choice based on texting prior and during The Hatch

Morgan Smith, another freshman marketing student -  a mobile app for residence halls notifying students of the availability of washers and dryers

Robert Striblen, a senior and a Veteran of the U.S. Navy, specializing in individualized business - a quick release belt system to transport boxes and totes

Jerrod Witt, a junior business student specializing in marketing and supply chain management  - an easy to use RFID location device for use by the visually impaired and as well as in the tourism industry

Three successful alumni shared their journeys including Paul Hooker '75 who is the owner and former CEO of SFERRA Fine Linens and a 2012 Dallas-Hamilton Entrepreneurial Hall of Fame inductee. Lori Steele-Contorer '86 is one of the world’s innovators in modernizing election systems through the company she founded Everyone Counts. Tom Embrescia '68 spent most of his 40-year broadcasting career owning and managing over 50 radio and television properties around the country