Although Graham only recently discovered her passion for Group X, she is no stranger to physical activity. The daughter of a softball coach and one of only two girls out of sixteen grandchildren, Graham grew up playing basketball, softball, and even football with her cousins in her hometown of Saginaw, Michigan. She especially loves basketball and was a member of her high school team up until her senior year. Unfortunately, Graham was forced out of the game after sustaining injuries to both ankles. While she did find a way to stay involved in sports by coaching in various girl's basketball leagues over the years, she did not return to playing sports regularly.

After moving to Bowling Green with her family in 2004, Graham found employment at BGSU first as an office manager and then as a student services counselor in the College of Arts and Sciences. When asked how she became involved with Group X at BGSU, Graham explained that after years of being less active she, “just wanted to be healthy and active again.” To get back into shape, Graham started working out in 2011 under the guidance of Recreation and Wellness personal trainer, Kristen Baumgardner. She described her experience working with Baumgardner: “She was so great and encouraging. When I did my very first 5k, she was right there with me the whole way. She pushed me. We started with no weights, and I was just lifting my water bottle; a water bottle is heavy at the end of a workout. Then she gradually moved me up. As a matter of fact, I had my knee surgery while I was going through my training. I would bring my sheets from my physical therapists and she would design my routine around my knee and around what I could and couldn’t do. She was awesome.” 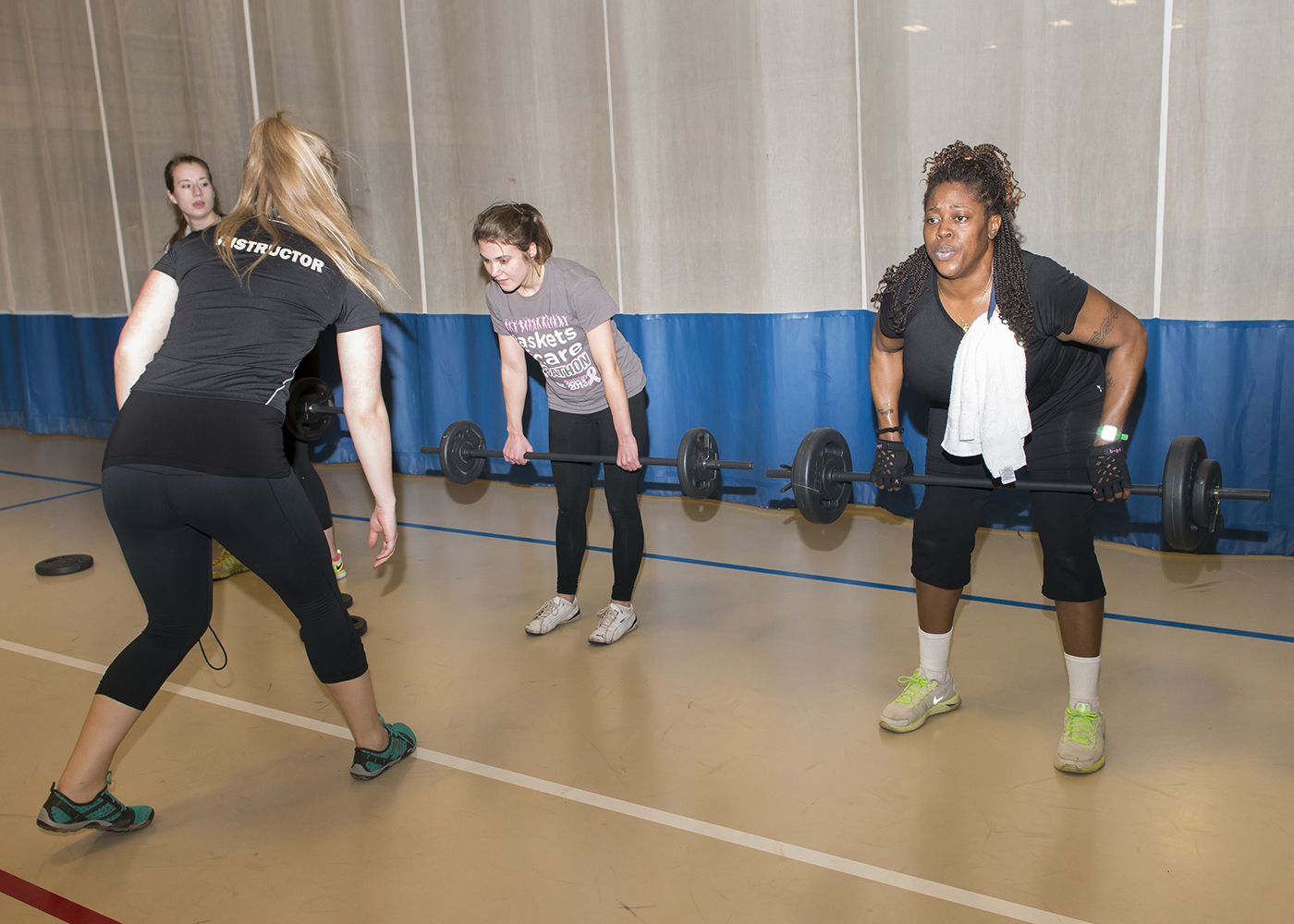 Graham initially tried out the Zumba® and cardio and tone classes, but quickly accelerated to taking three classes per day. She recalls that she instantly fell in love with the strength training classes and Bodypump™: “There was something about lifting that just feels so good afterwards. That soreness in the morning is so worth it – it hurts so good. That’s how you know you’ve got those muscles working.”

However, it was not love at first sight with cycle even though she now regularly teaches cycle classes. Graham described her initial experience: “I hated cycle to begin with – hated it. After my first twenty minutes in class I got off, wiped the bike off, and rolled it back. It was because I wasn’t positioned right, and not being positioned correctly killed my knees. But when someone showed me the correct position, I absolutely loved it. Learning the technique and just being in the right form really does help take off the pressure from everywhere. Now I teach cycle.” Graham now enjoys cycle so much that she celebrated her last birthday with a cycle-themed birthday party during her 6 AM class. 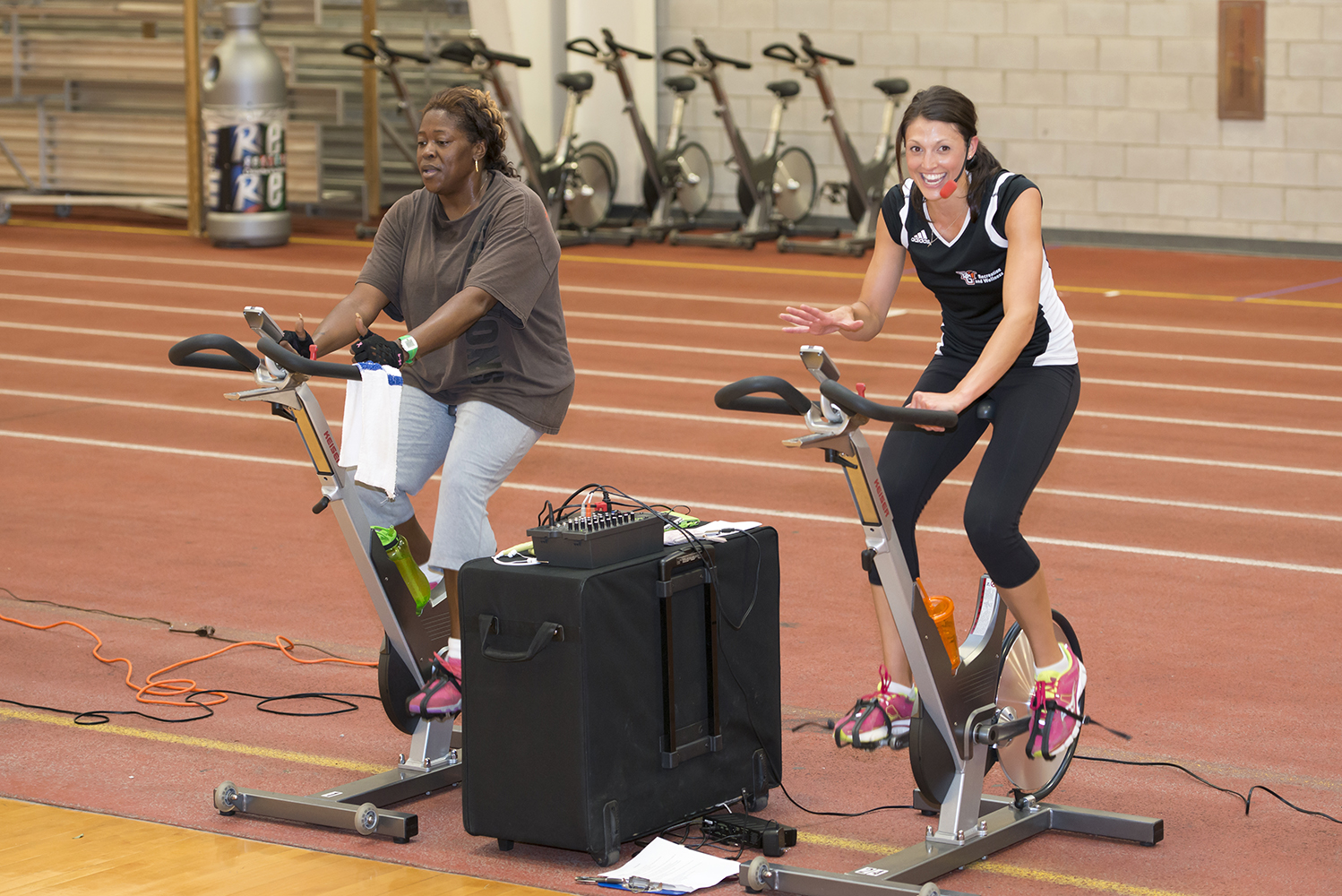 After challenging herself to get fit, Graham decided she didn’t want to stop there, and she made the decision to become an Athletics and Fitness Association of America (AFAA) certified Group X instructor. When asked what prompted her to transition from participant to instructor, Graham immediately responded, “Because someone told me I was too old. I will never forget when a lady I know said, ‘You can’t teach that – those are young kids,’ and I’m thinking to myself, I take three classes a day. I could teach once or twice a week. I only did it just to prove a point that it doesn’t really matter what your age is. It’s your energy.”

Graham began preparing herself for the test and took advantage of the next opportunity to become certified. Overall, she described the certification process as “easy.” She explained, “Everybody was so helpful with information, and the test was right here at BGSU on a Saturday. The instructor walks you through everything, and if you’re feeling nervous, she makes you feel comfortable.” Graham remarked that she would recommend the AFAA certification to anyone, and she even convinced her workout partner to become certified. She said, “I would recommend it for anybody just to have the knowledge. You can go teach one class once a week, and you’ve made that money back in under a year.” She also emphasized that you don’t need years of experience to become a Group X instructor because she only took classes for a couple years prior to becoming certified. 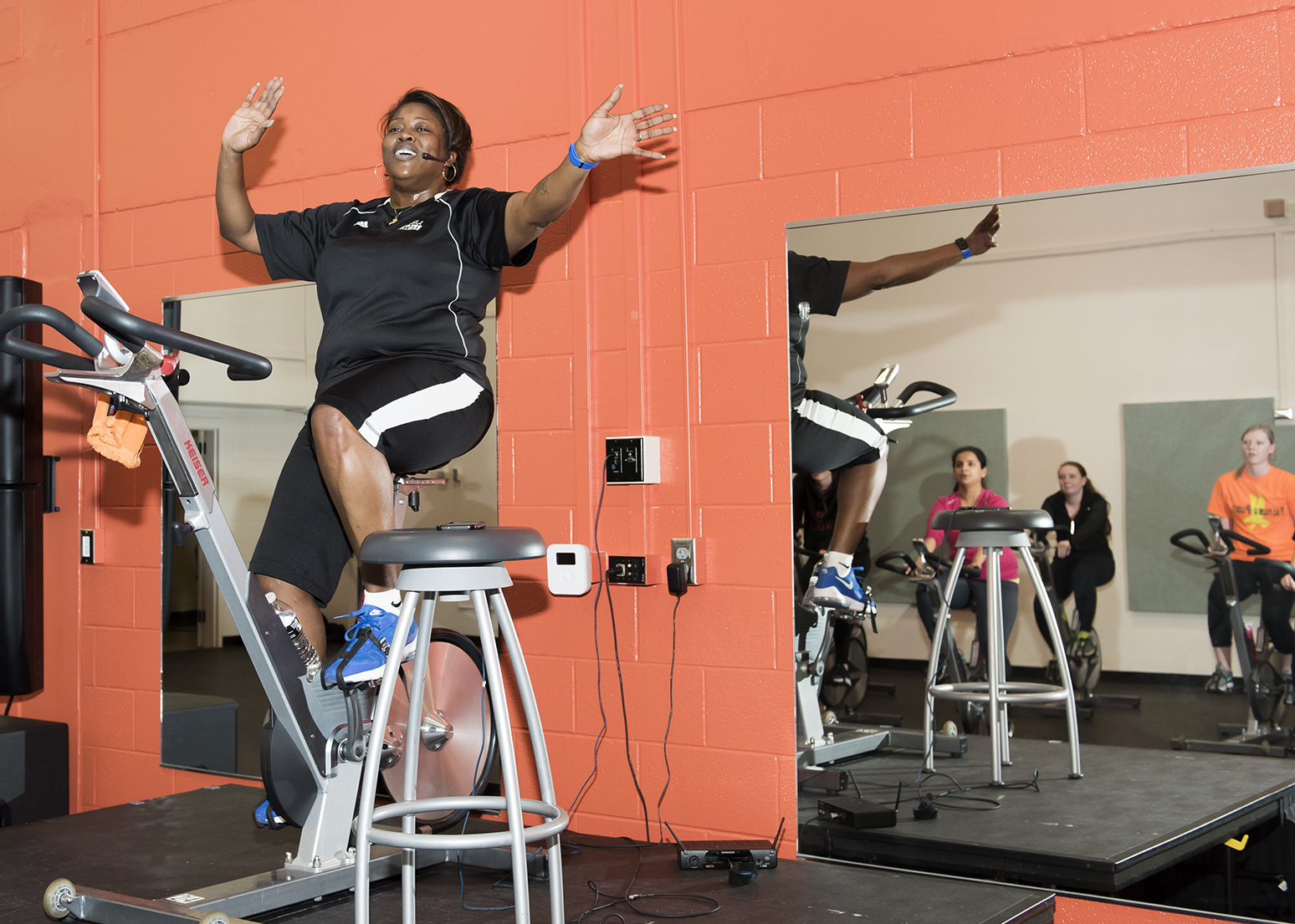 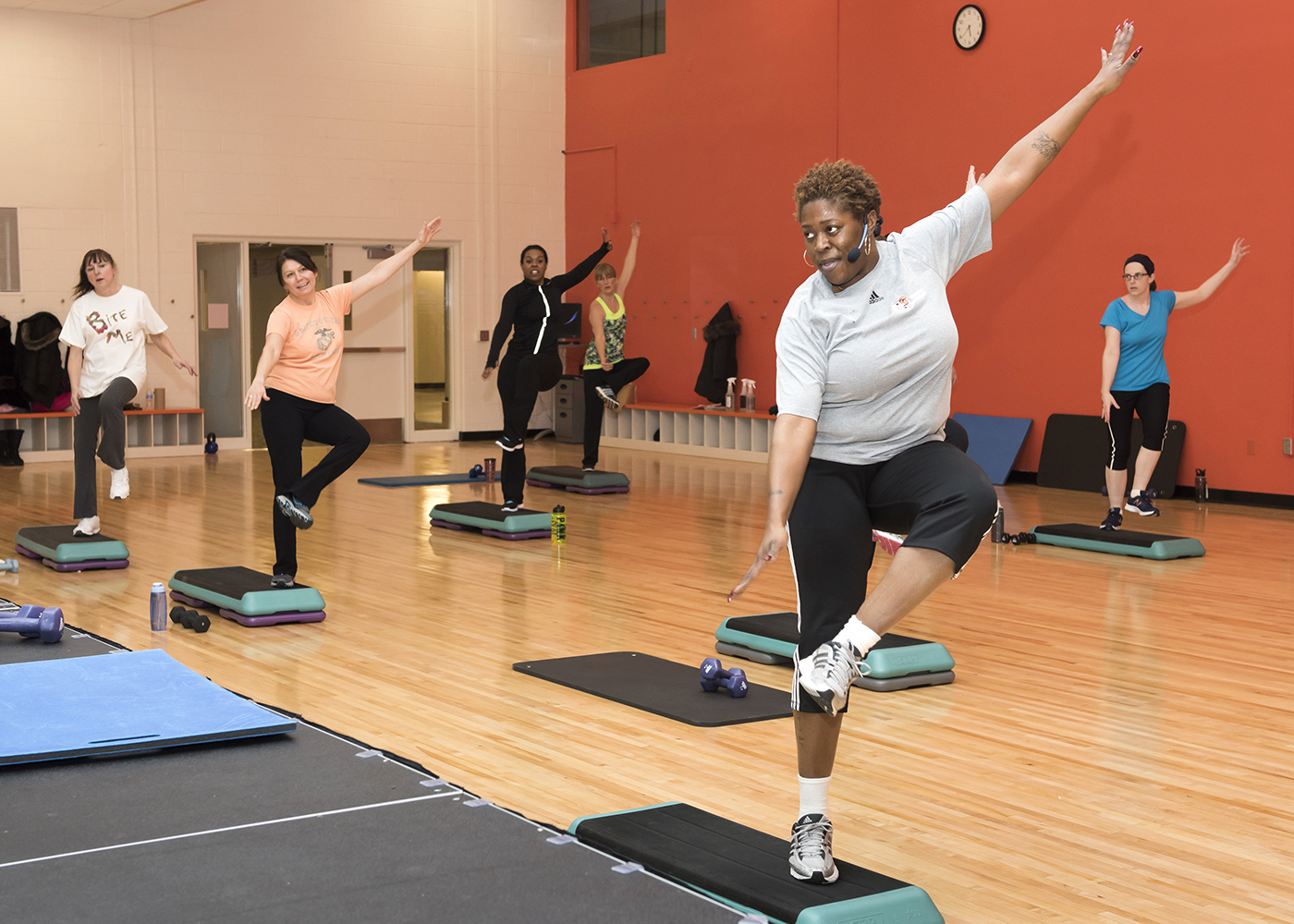 After becoming certified, Graham started teaching Group X classes as BGSU, and there are very few classes that Graham has not taught either as the regular instructor or as a substitute. In fact, it is easier for her to think of the classes she hasn’t taught than to list the ones she has. From cardio and tone to cycle to aqua fitness, Graham says she will try just about anything.

Graham describes herself as a music-based instructor, and uses the rhythm and beat to guide the pace of her routines – even in cycle classes where music traditionally stays in the background. She also likes to incorporate techniques she learns from other instructors and classes to provide a well-rounded workout experience. For example, she likes to incorporate a strength training segment into her cycle class that allows participants to work their upper bodies by lifting hand weights while cycling.

Graham’s ultimate goal as a Group X instructor is to help people achieve their fitness goals in a fun, encouraging, and safe environment. When asked how long she plans on teaching Group X, Graham replied without hesitation, “Until my knees tell me otherwise! I love it, and it’s something that I will always continue to do.” 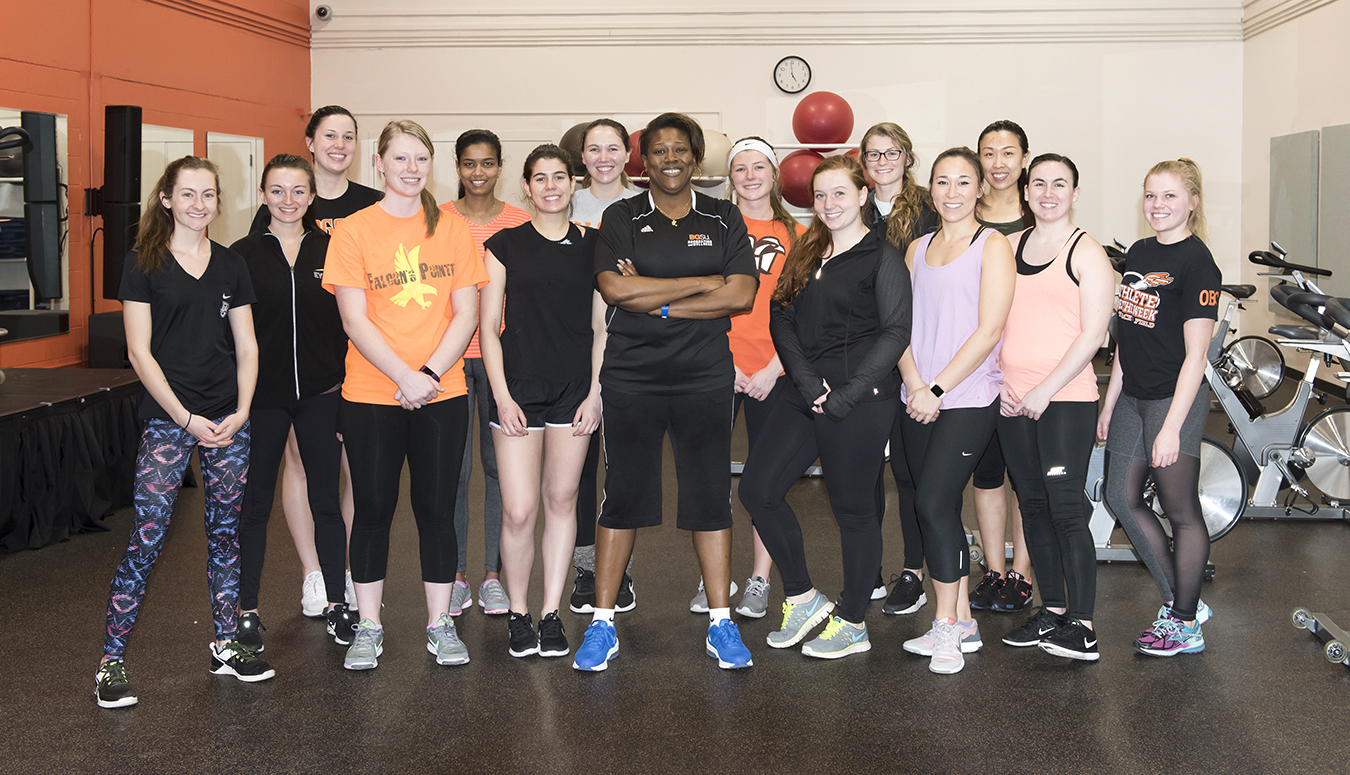