Noche Buena, Día de Reyes, Krismasi and the festivals—holidays around the world

A very special time of the year is approaching for everybody…the holiday season. Quickly after Thanksgiving, families go out to buy their trees, decorate their houses with lights, play holiday songs, light candles that give the house the scent of cinnamon, and prepare their favorite holiday dishes. As I reflect about this time of year, I realize that the way I view the holiday season is greatly influenced by my native country of Puerto Rico. Therefore, I wondered how people from other countries celebrate their holiday season, so I interviewed BGSU international business students to find out how they celebrated their holidays.

The following are their holiday memories from our international business students:

The holidays for Hugo start on “Noche Buena,” which is the way most people in Latin America call Christmas Eve. A common tradition that is celebrated in his family is to give gifts to their “Secret Friend” on that special night. A couple of weeks before “Noche Buena,” they write names of everyone in the family on pieces of paper, and place them in a container, and everybody pulls out the name of the person they will give a gift to on December 25th. All of those gifts are placed under the tree, and it is  explicitly known that nobody can touch those gifts until December 25th. 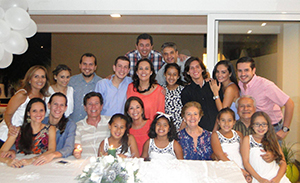 While they wait for midnight on “Noche Buena,” they have a huge family gathering where in the background you may hear various types of music played. His grandmother goes to every grandchild and hands them their gift and assures them that he/she is the only one that got a gift from her that day, even though everybody knows that is not true.

After some quality time with the family, they set out to eat. His family typically eats pork or as they call it in Bolivia, “chancho.” He stressed that they do not eat turkey, as they find it to be a dry kind of meat. When the clock strikes midnight, they all give their gifts to their secret friends and open various other gifts that are found under the tree. On Christmas Day, they don’t do anything in particular, but it is always a given that he will spend it with his immediate and extended family.

In Bolivia they also consider New Year’s Eve and New Year’s Day to be part of their holiday season celebrations, similar to America. On New Year’s Eve, Hugo spends time with his family until midnight and after that he heads out to have fun with his friends. The food that is typically served on that night includes “paella” and “chancho.” Additionally, as a symbol of wishing a good year to friends and family they gift each other miniature versions of credit cards, passports, and paper money which symbolize economic prosperity and happy travels for the New Year.

Soumya Kanchinadham, a Master of Accountancy Student, from Hyderabad, India

The holiday season for Soumya is very unique due to the fact that India is a secular country that embraces many religions. Consequently, there are numerous festivals and holidays that are celebrated based on the religion practiced.

Soumya practices the Hindu religion and some celebrations that are distinctive of such religion are called festivals. Some of the popular Hindu festivals that are celebrated are Ganesh Festival, Nivratri and Diwali Mela festivals. Soumya explained that the Ganesh Festival celebrates the Lord Ganesh and as part of the festivities, each family or community selects an idol to take home and then they select how many days (ranging from a day and a half to 11 days) they want to keep it within their household or community. The main purpose of the festival is to worship the idol and celebrate each night as well. After the period selected to worship each idol is expired, the idol is taken out in a musical procession and it is taken to the beach to be let go.

Thirdly, Soumya talked about a festival that is celebrated across all Indian states and it is called Diwali Mela Festival. This festival is also known as the "festival of lights" and it celebrates the triumph over good versus evil.

When talking to Soumya, she mentioned that each festival is characterized by their own typical foods. For example, in Ganesh, they typically have “modak,” which is a dumpling made with rice or wheat flour and is stuffed with dried fruits, and condiments and rice; in Nivratri they have “laddoos,” “payash,” and “bundi,” which are types of pastries that are popular within Indian cuisine.

Also, they usually dress up for these events. Women dress in their “sarees” (also known as sari) which are colorful dresses characterized by their draped fabric and men usually wear achkan, which is a knee length jacket or shirt.

Soumya revealed that her favorite festival was the Ganesh because the streets are decorated and lit up and the atmosphere around her community is lively and joyous.

Idols celebrated in the Ganesh festival in their traditional musical procession

Alice H. Abboud-Chalhoub, a Master of Accountancy Student from San Juan, Puerto Rico, whose parents are from Lebanon

As Alice grew up in Puerto Rico, she realized that the way she celebrated the holiday season was influenced by both the strong influences of her home country and of her parents’ home country. Her family is Catholic so throughout the holiday celebrations they go to mass, which is part of the traditions that are celebrated by Catholic families in Puerto Rico. For example, two of those services she attends are called “Misa de Aguinaldo” and “Misa de Noche Buena.” 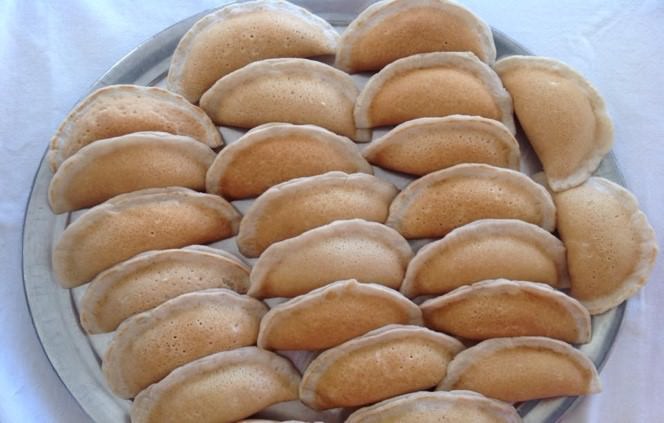 Alice's family posing for a family picture on "Noche Buena"

After going to “Noche Buena,” her family typically meets up at a family member’s house to wait until midnight so that they can all open their presents. Then, on Christmas Day they meet up again and have their traditional Christmas dinner which includes holiday dishes from Puerto Rico and Lebanon like: rice and beans called “arroz con gandules,” different types of salads like “ensalada de papa” and “ensalada verde,” and a popular dessert in Puerto Rico similar to coconut custard called “tembleque,” along with “atayif” and “baklava,” traditional pastries made in Lebanon.

Another important part of her holiday season is to see her home decorated with Christmas lights and the tree filled up with lights and ornaments. Music is also an important part of the activities she does with her family. She mentioned that they play different genres of music throughout the celebrations including salsa, Arab music, and a couple of American Christmas songs as well.

On New Year’s Eve, her family goes to mass and then she greets the New Year with her immediate family with a celebratory dinner commemorating the start of a New Year together as a family. A couple of days later, on January 6, she celebrates “El Día de los Reyes Magos” by gathering with her immediate and extended family, but they usually don’t give nor receive gifts on that day.

Bilha recently moved here from Kenya and will be celebrating her first Christmas in America. As the holidays approach, she reflects on what Christmas celebrations are like. In Kenya, Christmas is called Krismasi and is celebrated December 24 through 26.

During Krismasi, Bilha visits with family, and she said that her family tries to get together as much as possible because they hardly see each other during the rest of the year. Sometimes Bilha’s family plans an exotic vacation for Krismasi, such as the coastal region or different towns they have never visited. Bilha said her favorite holiday tradition is going to church on Christmas Eve and traveling to new places.

During the Christmas season eating, sleeping and meeting family and friends are a huge part. Popular Christmas foods include barbecue, which is often goat, sheep, bull, or chicken, and is eaten with rice and ‘chapati’ flat bread. This meal is called "nyama choma," according to Bilha. Around Christmas time they also celebrate Jamhuri which is the day Kenya gained independence.

Editor’s note: These students all have their own personal ways to celebrate the holiday season which are mainly influenced by their culture, religion, and different family traditions. Regardless of what you celebrate and whom you celebrate it with, you can agree that it is a time when we stop and reflect on the important things in life and forget all of our differences and the hardships endured.

Throughout my interviews, I couldn’t help but notice that even though Alice, Hugo, and I are all Hispanic and we might have similar holiday traditions, it is interesting how every family’s own traditions are incorporated into their celebrations. For example, even though Alice and Hugo do acknowledge “El Dia de los Reyes” as part of the Holiday season, they don’t celebrate it as much as “Noche Buena” and Christmas Day. However, in my family, this day is highly characterized by meeting up with family to eat the traditional “carne frita and viandas,” and then I usually go off to my grandparent’s house to open the gifts. Another similarity I noticed is that even though we all celebrate different activities, one thing that is important to all of us is spending much needed quality time with family and friends.