The Falcon football team headed to Memphis on September 24, hoping for a big win against the Tigers. But an innovative and highly motivated Falcon alumnus has already created a long-lasting win for the area north of Memphis by completing construction of a state-of-the-art steel mill resulting in billions of dollars of positive economic impact as well as revitalization of the American steel industry.

Steelmaking has been known for using low-tech, high-labor intensive manufacturing processes. Historically, American companies were some of the largest producers of steel globally 40 years ago. Today, they are not, as American steel producers have lost market share to steel producers in foreign countries. All is not gloom and doom, however.

BGSU alumnus David Stickler ’83, CEO of Big River Steel (BRS), has spent the past two decades building and operating some of the world’s most successful and profitable steel mills right here in the United States. The secret, according to Stickler, is to not think like a traditional steel producer. In fact, Stickler refers to his projects as recycling companies that also produce steel. Unlike traditional steel producers that use iron ore, coal and coke to produce steel in environmentally challenged facilities, Stickler produces new steel using recycled steel from old cars, appliances, buildings, ships and bridges. He also does so using a Silicon Valley focus on technology. As Stickler says, “Some steel in this country is still produced with 80% brawn and 20% brains; our steel is produced with 90% brains and 10% brawn. In fact, we position our companies as technology companies that just happened to be located in the heart of industrial America.”

Currently, Stickler is forging ahead with his objective of reshaping the steel industry by building yet another recycling technology company that just happens to make steel. Stickler’s most recent project, BRS, is a $1.6 billion FlexMill™, the first of its kind in the world. BRS, which began production in March 2016, is positioned to become the world’s leading steel producer in terms of range of product offering, energy efficiency and environmental cleanliness.

Located on the banks of the Mississippi River in Osceola, Arkansas, one hour north of Memphis, Tennessee, BRS was built in one of the most economically challenged areas of the county. 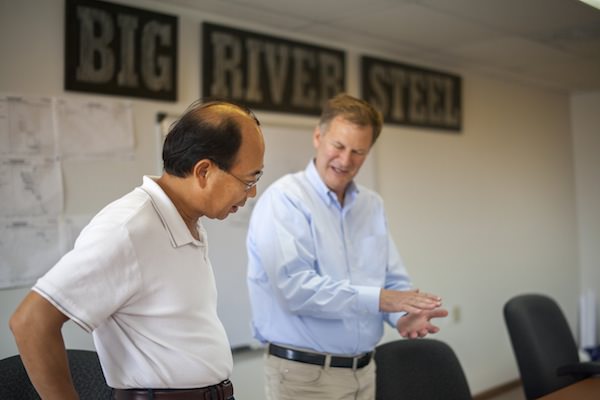 Asked why he located BRS in the long suffering Mississippi River Delta region, Stickler explained the site selection process he and his team employed while looking to invest $1 billion plus in projects to BGSU Associate Professor of Finance, Mingsheng Li. Given the highly innovative and sophisticated site selection program that BRS used, Dr. Li saw an opportunity to create an experiential learning project for his students, so he is working with Stickler and his team to create a case study the professor will use in his classes and that will be part of a future research project.

Not only is the technology and manufacturing processes Stickler employs different compared to most other steel producers, but Stickler is highly focused on using business analytics to efficiently operate the steel mill. Recently, he has turned to the Director of the BGSU Center for Business Analytics, Dr. Arthur Yeh, also Chair of the Department of Applied Statistics and Operations Research and world-renown expert, to assist the BRS team to optimize the mill’s manufacturing operations using analytics.

"In addition to our state-of-the-art production technology,” states Stickler, “we want to incorporate cutting edge analytics to help work ‘smarter.’ We are very excited to be drawing on the expertise of the BGSU Center for Business Analytics." 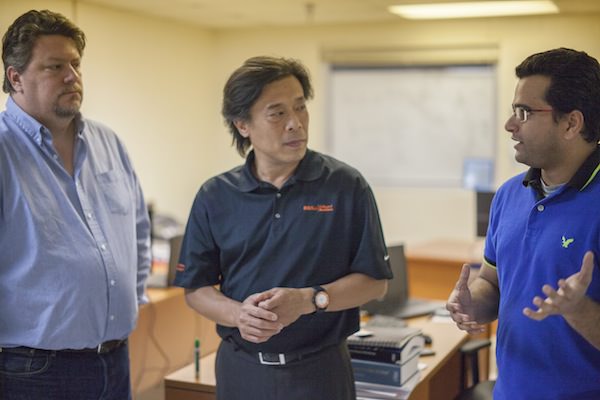 Dr. Yeh sees real advantages to students with the partnership. “There are plenty of opportunities across BRS operations for unique and exciting analytics applications such as process analysis, process improvement, scheduling optimization and predictive modeling. Our students in the Center for Business Analytics will benefit from a real world, challenging experience.”

In addition to his efforts to continually advance the steel industry away from environmentally challenged antiquated production methods, Stickler has repeatedly faced one of the biggest hurdles startup firms must overcome. Gaining access to startup capital, whether to build a new $1.6 billion steel mill or open a single retail establishment is a daunting task. "Given that Stickler typically structures each project as a standalone entity without the benefit of corporate guarantees, raising $1.6 billion in less than two years without going through an initial public offering is almost unprecedented,” states Dr. Li. “Thus, BRS is a good example for students to explore beyond what they normally learn from textbooks. More importantly, BRS also provides an excellent research opportunity for investigating the externality of a large firm in a small local economy.”

Because of BRS’s site selection program, the area surrounding the plant has seen a huge economic impact. According to Stickler, the economic impact of his company’s mill is expected to be nearly $3 billion, making it the largest economic development project in the history of Arkansas. The labor force will also be much different than traditional blue collar steel mills of years past. BRS has invested $10 million into training a highly-skilled workforce of technicians who “embrace a new way of steelmaking.”

"BRS is committed to being an excellent corporate citizen,” states Stickler. “We make the environment, safety, and sustainability a priority.”

Stickler has a distinguished global reputation for structuring and raising capital for many of the world's highest profile steel industry projects. He is well-known for his ability to raise billions of dollars of startup and expansion capital for new and growing steel companies. Stickler is the senior managing director of Global Principal Partners, a firm modeled after the European merchant banking firms of the past where firms invested their own capital alongside the capital that they structured and raised. In the case of BRS, Global Principal Partners raised equity capital from TPG Capital, one of the ten largest private equity firms in the world, Koch Industries, the second largest privately held company in the United States with annual revenues approaching $100 billion and the Arkansas Teachers Retirement System, a pension fund with over $15 billion under management. BRS’s debt financing, which Global Principal Partners also structured and raised, was provided by a syndicate of European banks, KfW IPEX-Bank GmbH of Germany. Interestingly, the BRS project involved three of Forbes’s top ten wealthiest billionaires in the world – Charles and David Koch and Warren Buffet (the BNSF railroad, owned by Birkshire Berkshire Hathaway, invested heavily to enhance rail service to the BRS site).

Besides forming BRS, Stickler also recently teamed up with Kleiner Perkins, a leading Silicon Valley venture capital firm, to form and finance BlueOak, an environmentally focused mini-refinery that takes end of life electronics and recycles the metals and rare earth elements into usable raw materials. Stickler points out that ten tons of urban mining (recycling used cell phones, circuit boards and other forms of electronics) produces the same amount of gold, silver and platinum as mining 100 tons of raw earth. BlueOak, which was opened at a ceremony attended by Vice President Al Gore, is well on its way to helping reduce the amount of environmental damage caused by open pit mining in various areas of the world.

Another company Stickler formed within the past three years was Mississippi Silicon, the first newly built silicon metal production facility in the United States in over 40 years. On the Mississippi Silicon project, Stickler’s Global Principal Partners teamed with a leading Brazilian industrial company, Rima, to build a highly energy efficient silicon metal production facility in the state of Mississippi.

According to Stickler, all three of these projects involved greenfield construction projects which means building a project from the ground up, without any form of corporate guarantee. He adds, “The invested capital was $1.6 billion at Big River Steel, $35 million at BlueOak, and $200 million at Mississippi Silicon. In total the projects created thousands of good high-paying industrial jobs.”

Because of Stickler’s illustrious entrepreneurial career and innovative ideas, BGSU will be honoring Stickler this spring by inducting him into the prestigious Hamilton Entrepreneurial Center Hall of Fame. He will join a select group of outstanding entrepreneurs who have distinguished themselves as highly successful business innovators who are committed to their alma mater. 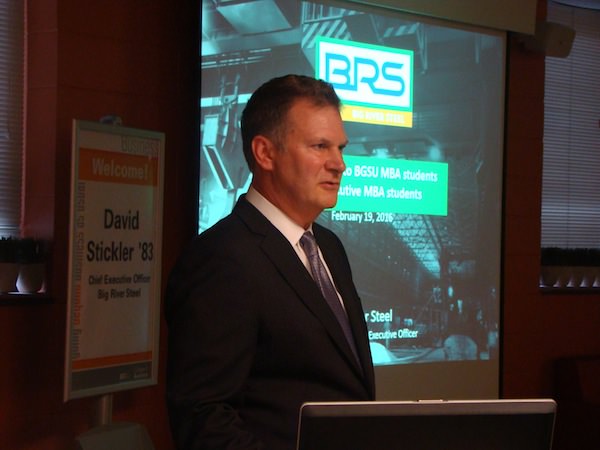 Stickler, who graduated from BGSU with an accounting degree, continues to be a loyal and engaged alumnus. He returned to campus last spring to share his insight with MBA and Master of Accountancy students during an Executive Briefing session.

In addition to that presentation, Stickler hosted an alumni event in Beijing, China, over the summer. The alumni gathering was in conjunction with a Business Analytics Symposium that BGSU’s Center for Business Analytics co-hosted with Beijing Information Science and Technology University.

Stickler has great pride and praise for his Falcon alma mater which provided him with an outstanding business education. “My business education at BGSU’s College of Business provided an excellent foundation for my career. The critical thinking, communication, and interpersonal skills developed as a student have been invaluable throughout my career.”

Stickler’s strong entrepreneurial spirit and innovativeness have already sparked major changes in the U.S. manufacturing industry and, no doubt, there is more to come from this world-class BGSU alumnus.