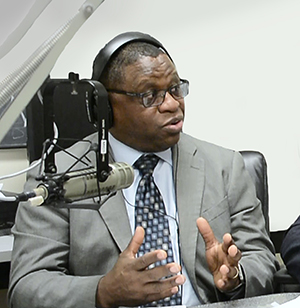 One accounting professor traded in his PowerPoint clicker and BGSU classroom for a pair of radio headsets and microphone at WRRC 107.7 in the Philadelphia, PA, and Trenton, NJ, region to star on the show “In the Mix.” BGSU Assistant Professor Fred Coleman was a special guest on a one-hour talk show, answering questions concerning the implications of the “Tax Cuts and Jobs Act of 2017,” signed into law by President Trump on December 22, 2017.

In his “Ask the Tax Man” role, Dr. Coleman fielded questions about changes in tax rates, allowable credits, income exclusions, itemized deductions, and the state of the alternative minimum tax (AMT). Besides talking about individuals and family taxes, he commented about changes in taxes for small business and corporations as well.

What does the radio star think about his stint on the show? “Personally, handling questions on taxation ‘live’ in a radio studio was exhilarating. I was able to bring to bear an intense study of the ‘Tax Cuts and Jobs Act,’ current tax research, and over 15 years of teaching various tax courses at both the undergraduate and graduate levels to address the aforementioned tax issues accurately.”

WRRC’s “The Bronc” is located on the campus of Rider University which broadcasts “In the Mix,” hosted by Dr. Alexander Nicolas, every Tuesday and Thursday. “In the Mix” discusses various religious, educational, political, social, and economic topics in addition to encouraging and inspiring listeners.

Dr. Coleman may not be hanging up his radio headsets and microphone just yet.  “Because of my vast experience in accounting, including owning my own consulting business, Dr. Nicolas wants me to come back and talk about other business topics in addition to tax and accounting. I look forward to future broadcasts.”