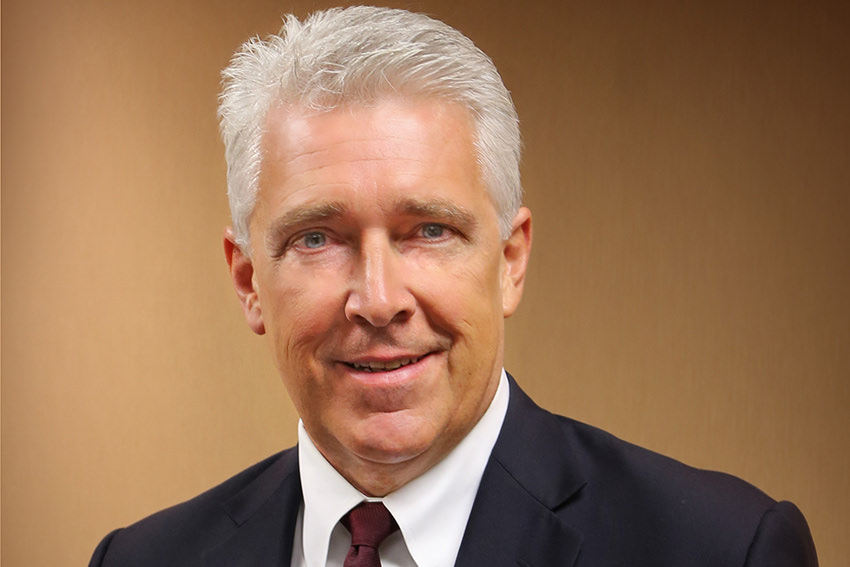 A 1983 graduate of BGSU is going beyond business as usual and says success can be embodied in a Michelangelo quote he likes - “The greatest danger for most of us is not that our aim is too high and we miss it, but that it is too low and we reach it.”

Steven Lynch ‘83 is president of Clopay Building Products Company, North America’s leading manufacturer and marketer of residential and commercial garage doors and entry door systems. He brings Michelangelo’s quote to his executive role. “We aim high, set stretch goals, and work to achieve them. Mistakes happen, but our passion and desire for excellence are never diminished. We keep working to make it right.”

Clopay, in Troy, Ohio, is a wholly owned subsidiary of Griffon Corporation. Clopay owns and operates a network of 50 distribution centers and sells to more than 2,000 independent professional dealers as well as major home center retail chains.

The company’s success, Lynch says, comes from a well known leadership principle used by the U.S. Navy - “Ship, Shipmate, Self” - which was adopted into Clopay’s core values.

“Those three words guide the Navy’s priorities and loyalties in every scenario,” Lynch said. “Our first priority is to the company and its success; secondly, we help our teammates succeed, and if we do the first two, the third will take care of itself.”

Innovation and a drive for success helped the company get through the recent Great Recession. “Seeing the company weather the downturn in the economy and rebound to extend our market leadership in the garage door category” is what Lynch identifies as one of the most rewarding accomplishments so far in his career.

“When the housing bubble burst, our industry saw up to a 40 percent decline in market opportunity. Many building product companies battened down the hatches and put capital expenditures and new product development on hold.”

Clopay, however, responded by focusing its attention on cost reduction initiatives and technology upgrades to improve operational performance. “That included consolidating operations and optimizing four production facilities into our one million square foot manufacturing plant in Troy that we purchased in 2006, before the crisis hit.”

At the same time, Clopay successfully launched two new products that met consumer demand for energy efficiency and sustainability. “We knew we had to make changes but our outlook was to the future and positioning ourselves to be ready when the market rebounded.”

Not only has Clopay expanded its operations and introduced innovative products, but today it is one of the few major garage door manufacturers that is still American owned and operated.

Keeping operations in the U.S. is a big advantage. “North America is the largest market in the world for residential garage doors. We sell our products in many countries, but North America is where our primary focus remains.”

The challenge of leading a large company today, Lynch said, is “staying in front of and adapting to evolving technology.”  It is something that needs to be “integrated onto the shop floor to maximize productivity, used as a competitive tool to connect with consumers at various stages in the purchase process, and adapted to have an impact on society’s expectations for communication, customer service, and delivery of goods.”

Times have definitely changed. “Ten years ago, a homeowner shopping for a new garage door or other major exterior product would go to a showroom to see what was on display, take home a brochure, place an order, and hope they made the right decision.”

Today, by contrast, a customer can design a garage door and see how it looks on their home before they purchase. “A dealer comes to the house, takes a photo of it with an iPad, and talks to the owners about the options that they want and their budget. Then the program provides three product recommendations based on that criteria and shows the customers how each of those doors will look on the photo of their house. If they reach a decision, the dealer can provide a quote and e-mail the order directly to Clopay’s production floor while they are still sitting at the kitchen table. Everything is electronic.”

These visualization tools give customers the confidence to experiment with garage door styles they may not have otherwise considered, like a contemporary glass door or an old-fashioned carriage house door. “The majority of homeowners sell themselves on a design upgrade once they see the impact it has on their home’s curb appeal.”

Lynch credits his alma mater with a quality education that has helped him throughout his career. “BGSU gave me a strong foundation in terms of my general education and developing interpersonal skills. The most important lesson I learned that still applies every day is to find my own truths instead of relying on other people’s interpretations. It is particularly true when I am reviewing financial reports. It’s important to dig deeper and look for the nuggets that present the most accurate picture.”

Digging deeper was emphasized by one of Lynch’s most memorable BGSU professors, Dr. Neil Browne, Distinguished Teaching Professor Emeritus, Economics. “If you knew him, he was a pretty passionate guy. He challenged you to think for yourself and rewarded original positions,” Lynch said. “After one test, he [Dr. Browne] stood up and told the class that for the first time ever he was awarding full credit to a student who, in his opinion, had answered the question entirely wrong. He went on to say that the justification used in the answer was sound and that it had merit. I was the student who got one hundred percent credit for ‘getting it wrong’. He taught me to dig deeper and make sure positions were based on solid information.”

The future for Clopay looks wide open as this BGSU alumnus opens many innovative doors to keeping his company competitive and fostering teamwork.