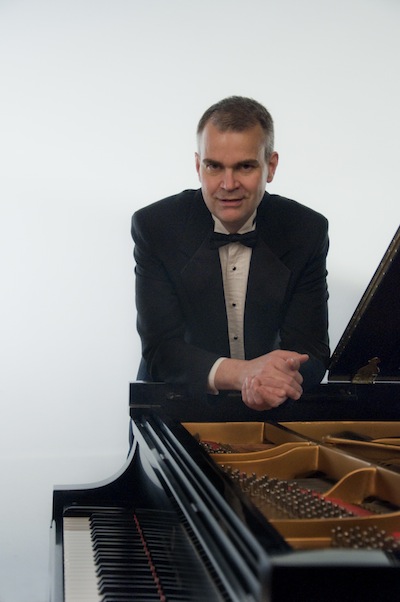 Pianist Robert Satterlee has developed a reputation as an accomplished and versatile solo recitalist and chamber musician.  He plays regularly throughout the United States, delighting audiences with his incisive and imaginative performances.  He has appeared on the Dame Myra Hess Memorial Concerts in Chicago, San Francisco’s Old First Concert Series, the Schubert Club in St. Paul, Minnesota, the Music Teachers National Association national conferences, the Quad Cities Mozart Festival and many colleges and universities.

He regularly performs in China, including concerts in Beijing, Shenyang, Chengdu, Guangzhou, Tianjin and Nanjing. Satterlee has played concerts at the new Romanian-American Festival in Romania, the World Piano Conference in Serbia and at the Interlochen Arts Center in the United States.  He was a featured performer at the Piano Plus Festival and the Corfu Festival in Greece and has also performed in Sweden, Holland, Germany, Thailand and Kenya. He has been heard in radio broadcasts throughout the United States, most notably on Minnesota Public Radio and WFMT in Chicago.

Music of our time plays an important role in Satterlee’s performing activity, and he has given premieres of several works.  In June of 2004 he was invited to perform at the Music04 festival in Cincinnati, where he shared a program with the composer and pianist Frederic Rzewski. In 2006 he toured the US with a program of the composer’s works, including a new piece specially written for the tour, and has released a CD of his works on the Naxos label. The CD has garnered glowing reviews, and was selected by the New York Times as one of the outstanding classical recordings of 2014. His most recent CD, with music of Rzewski and William Albright, was released on the Blue Griffin label February 2015.

Satterlee’s avid interest in chamber music has led him to collaborate with members of the Chicago, London, Philadelphia and Detroit Symphony Orchestras in chamber music performances, and he was co-artistic director of Chamber Music Quad Cities, an organization presenting a concert series and music festival in Iowa and Illinois.

Satterlee was appointed in the fall of 1998 to the piano faculty of Bowling Green State University in Ohio.  He teaches at the Interlochen Arts Camp in the summer.  He has been awarded prizes in many competitions, among them honors in the St. Louis Symphony Young Artists Competition. He holds degrees in piano from Yale University, Peabody Conservatory, and the University of Missouri-Kansas City Conservatory of Music.