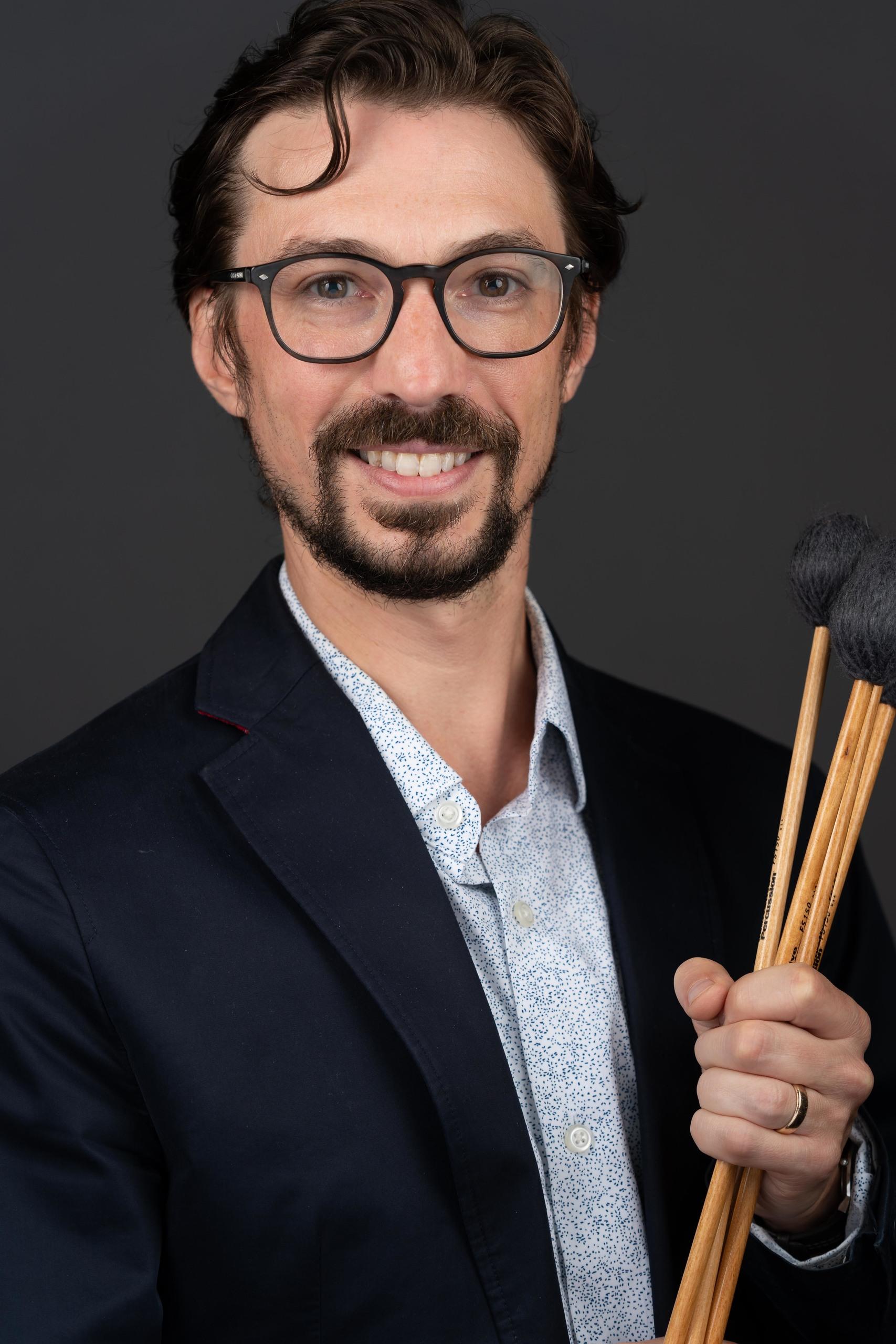 Percussionist Dan Piccolo has performed, taught, and studied internationally during his twenty-year professional career. He is currently Associate Professor of Percussion in Bowling Green State University’s College of Musical Arts.

Dan holds both a DMA and BM in Percussion Performance from the University of Michigan School of Music, Theatre & Dance, and during his master’s studies in U of M’s Jazz Department he focused on improvisation. He has studied concert percussion with Michael Udow, Salvatore Rabbio, Joseph Gramley and Jonathan Ovalle, among others, and his drum set and improvisation teachers have included Michael Gould, Steve Curry, and Ed Sarath. Dan is also skilled in several forms of non-Western percussion, having studied frame drumming with Jamey Haddad and tabla with Pandit Kuber Nath Mishra in multiple visits to Varanasi, India. A grant from the University of Michigan’s International Institute funded the first of these visits, and he returned to Varanasi in the winter of 2015 thanks to an award from the Presser Foundation. An additional award from U of M’s International Institute made it possible for Dan to begin formal studies of West African music in Ghana in the summer of 2014.

Dan’s debut solo recording, Monobot, was released on the Equilibrium Recordings label in December 2020. In October 2019 Dan gave the world premiere of Evan Ziporyn’s concerto for drum set and wind ensemble, Impulse Control, which written was written for Dan and for which he led the commissioning consortium. Dan has also premiered works by composers including Aaron Kernis, Christopher Dietz, Emma O’Halloran, and Adam Silverman, as well as his own compositions, and he continues to work actively with composers to commission new solo and ensemble works for percussion.

Dan has appeared as a soloist with groups including the Toledo Symphony Orchestra and the University of Michigan Percussion Ensemble, and as a guest artist at colleges and universities throughout the United States and Canada. As a chamber musician he has enjoyed collaborations with notable artists including Third Coast Percussion, composer/pianist Harold Budd, percussionists Ji Hye Jung and Joseph Gramley, the arx duo, pianist Sonya Belaya, and the Detroit Chamber Winds. Dan also remains active as a jazz drummer, working with musicians such as John Scofield, Regina Carter, Mike Stern, and Stanley Cowell. For six years Dan was the drummer with Nomo, with whom he toured internationally and recorded three albums for Ubiquity Records. Dan has also toured and recorded as a member of Cloud Nine Music, The Ragbirds, His Name is Alive, and others. Dan continues to perform regularly with symphony orchestras, rock bands, Indian classical music ensembles, jazz groups, and in various chamber music configurations. This busy performance schedule has earned him invitations to perform at the Percussive Arts Society International Convention and the annual conference of the International Society for Improvised Music. He is currently a member of the X4 Percussion Quartet, Ensemble Duniya, Big Fun, and is the percussionist with the mirabai Women’s Choir.

In addition to his busy professional schedule, Dan is a dynamic educator, teaching a broad range of percussion instruments in private and classroom settings. He has presented workshops and masterclasses at universities throughout the United States, and has twice been selected as a clinician at the Percussive Arts Society International Convention. Dan spent six years as the coordinator of the percussion program at Ann Arbor’s Pioneer High School, during which time the school was twice named a Grammy Signature School. In 2016 Dan joined the faculty of the College of Musical Arts at Bowling Green State University in Bowling Green, Ohio. Prior to this appointment Dan was Assistant Director of Percussion at the University of Tennessee at Martin, and he previously served as Head of the Percussion Area at New England Music Camp in Sidney, Maine.

An active member of the Percussive Arts Society, Dan served as a member of the World Percussion Committee from 2014 to 2019, and he currently serves as Associate Editor for Professional Development for the Society’s journal, Percussive Notes. In 2021 he began his first term as President of PAS’s Ohio Chapter.