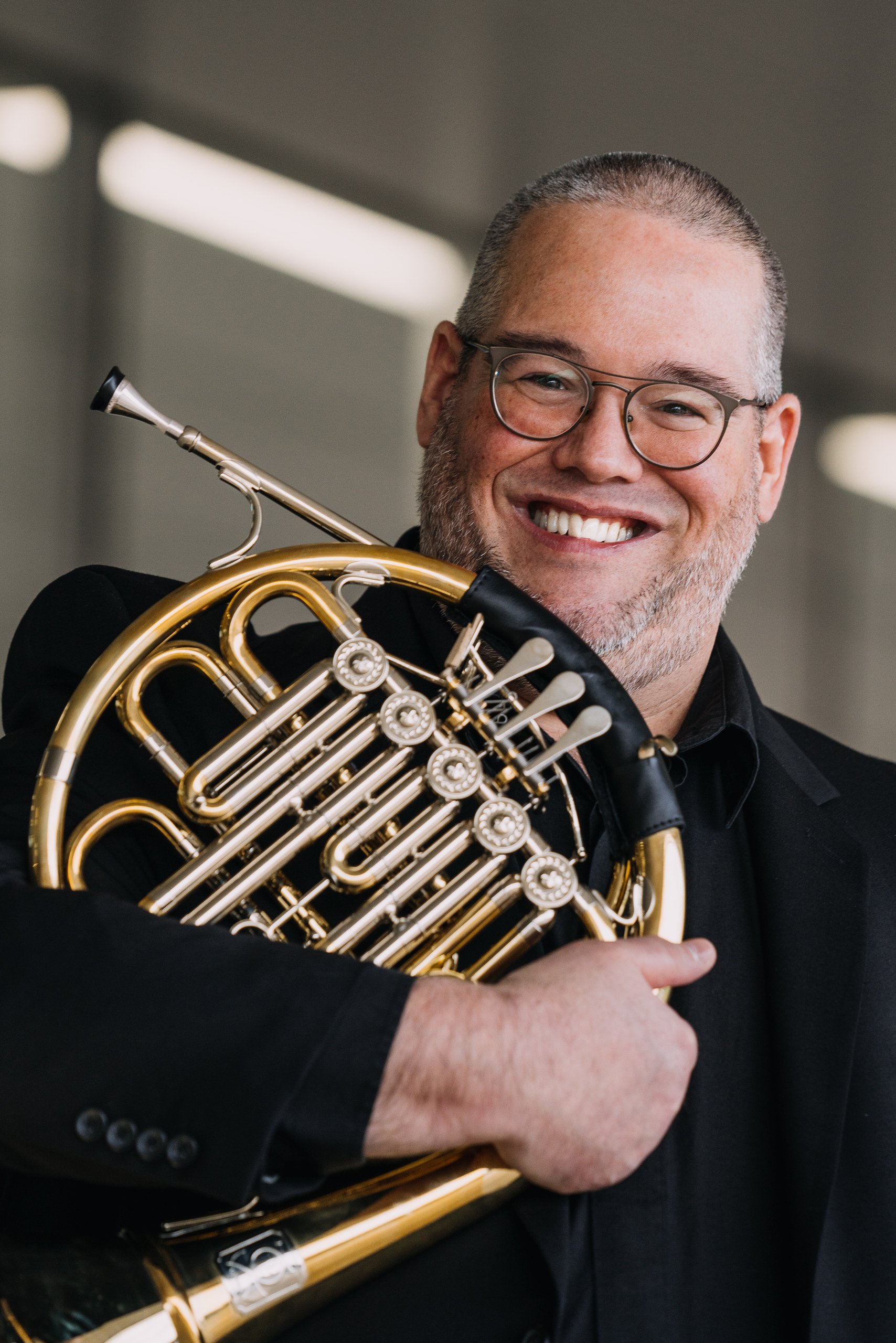 Internationally active horn soloist, Grammy Award winning chamber musician, and
masterclass clinician, Andrew Pelletier enjoys an extremely busy life of solo playing,
orchestral performance, and mentoring developing musicians. On his solo performing, John
Henken of the Los Angeles Times wrote, “gleaming, handsome playing. Pelletier is a soloist
who seems capable of anything on his instrument.” Fanfare Magazine called him
“Phenomenal…undeniably in tune with what he plays” and the American Record Guide has
praised his “full sound and playing with authority and imagination.” The First Prize winner
of the 1997 and 2001 American Horn Competition (America’s only internationally
recognized competition for the horn), he has appeared as a Featured Artist at the
International Horn Society Annual Symposia of 2009 and 2014, and has appeared as a solo
artist at the Symposia of 1997, 2003, 2005, 2013, 2016, 2017, 2018, 2019, and 2021. He is
in regular demand for artistic residencies and clinics at universities and music schools, and
these solo tours have taken him to 30 US states, Australia, Belgium, Brazil, Canada, China,
England, and Mexico.

As a chamber musician, he performs with Southwest Chamber Music in California (with
whom he won the 2005 Grammy award for Best Classical Recording, Small Ensemble), the
Motor City Brass Quintet in Detroit, and has performed with the Empire Brass Quintet,
Detroit Chamber Winds and Strings, and with Chamber Music at the Scarab Club, Detroit. As
an orchestral performer, he is the principal horn of the Michigan Opera Theatre at the
historic Detroit Opera House, and has performed as guest principal horn for the Los Angeles
Philharmonic (under Music Director Gustavo Dudamel), the Detroit Symphony, the
Toledo Symphony and Toledo Opera, ProMusica Chamber Orchestra of Columbus, and the
Windsor (Canada) Symphony. He is the former principal horn for the Ann Arbor Symphony,
Santa Barbara Symphony, Ann Arbor Ballet Theatre, Columbus Bach Ensemble, Long Beach
Camerata, Maine Chamber Ensemble, and Portland (Maine) Ballet. He has also performed
for over five seasons with the Portland (Maine) Symphony Orchestra, and is a founding
member of the Portland Opera Repertory Theatre (now Opera Maine), with whom he
performed for three seasons. He spent almost a decade as an active free-lance performer in
Los Angeles and can be heard on film soundtracks as Battle: Los Angeles, Your Highness,
Lethal Weapon 4, The X-Men, Frequency and TV movies for Lifetime TV and the SyFy Channel.

Since 2004, Pelletier is very proud to serve as the Professor of Horn of the College of
Musical Arts at Bowling Green State University, in Bowling Green, Ohio, where he also
serves as the Coordinator of the Brass Area. He was named a Professor of Creative Arts
Excellence at BGSU in 2020. He has previously taught at the Portland (Maine) Conservatory
of Music, Moorpark College, Ventura Community College, and the University of Southern
California. Andrew Pelletier plays exclusively on horns by Paxman of London, England, and
mouthpieces by PHC London.