The Women in Entrepreneurship Panel is an event where students, faculty, staff, alumni, and friends can engage, hear entrepreneurial experiences, and ask questions from a panel of highly successful women entrepreneurs. 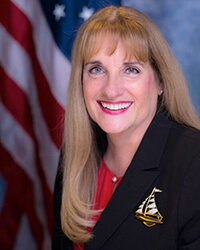 Rear Admiral June Ryan is a motivational speaker, Success Trainer and coach drawing upon her 35 years of military service, two formal certifications in the Success Principles - Getting from Where You Are to Where You Want To Be®, by Jack Canfield, co-Author of Chicken Soup for the Soul®, and certification as a Barrett Values Centre Consultant.

During her career, Admiral Ryan was a trailblazer, achieving many historical firsts for women – including the first enlisted woman in the Coast Guard to rise to the rank of Rear Admiral, the first woman to serve as the Military Advisor to the Secretary of Homeland Security, and the third woman in our nation’s history to serve as the Military Aide to the President of the United States.

She served in a wide variety of leadership roles including five command positions; two aboard Coast Guard cutters, three regional units ashore. She also served as the Chief of Staff of Coast Guard Pacific Area, an area that encompasses 6 of the 7 continents, 71 countries, and more than 74 million miles of ocean from U. S. Western States to Asia and from the Arctic to Antarctica. Prior to her retirement in October 2017, June served as the Commander, Ninth Coast Guard District (Great Lakes Region), leading the 6,000 men and women of the Coast Guard across an area of responsibility that spanned 8 states and a 1,500-mile international maritime border. She again made history as the first woman to hold that assignment. Even her final Change of Command was historic. It marked the first time in U.S. history that a female Coast Guard Admiral was relieved as District Commander by another female Coast Guard Admiral.

Rear Admiral Ryan holds a Bachelor of Science degree in Biology from Bowling Green State University, and a Master of Arts degree in Adult Education from the University of South Florida. She is a graduate of the National Preparedness Initiative (NPLI) from the Harvard School of Public Health/Harvard Kennedy School of Government. In addition to her two certifications in Success Principles, she holds the highest-level certification from the Barrett Values Center Institute using powerful metrics to assisting leaders in building values-driven cultures in their organizations.

When not speaking or volunteering, she enjoys spending time with her husband of 30+ years, their 17-year old daughter, Aisling and dog Lucy.